Posted on September 22, 2016 by agirlandhercommander

The last trip I took to work on Mander I mostly scraped. And scraped. And scraped some more. But of course, as I’ve now learned, before you can do the work you are aiming to do, you gotta do other stuff first. So my Dad and I built scaffolding in preparation for all the climbing up and down I was about to do. After wrestling with a bunch of rusty metal we had scaffolding on both sides of Mander erected and I climbed my butt up to the roof; sights set on replacing the very dilapidated bathroom skylight.

It was actually pretty satisfying digging out the old one and it went relatively quick. 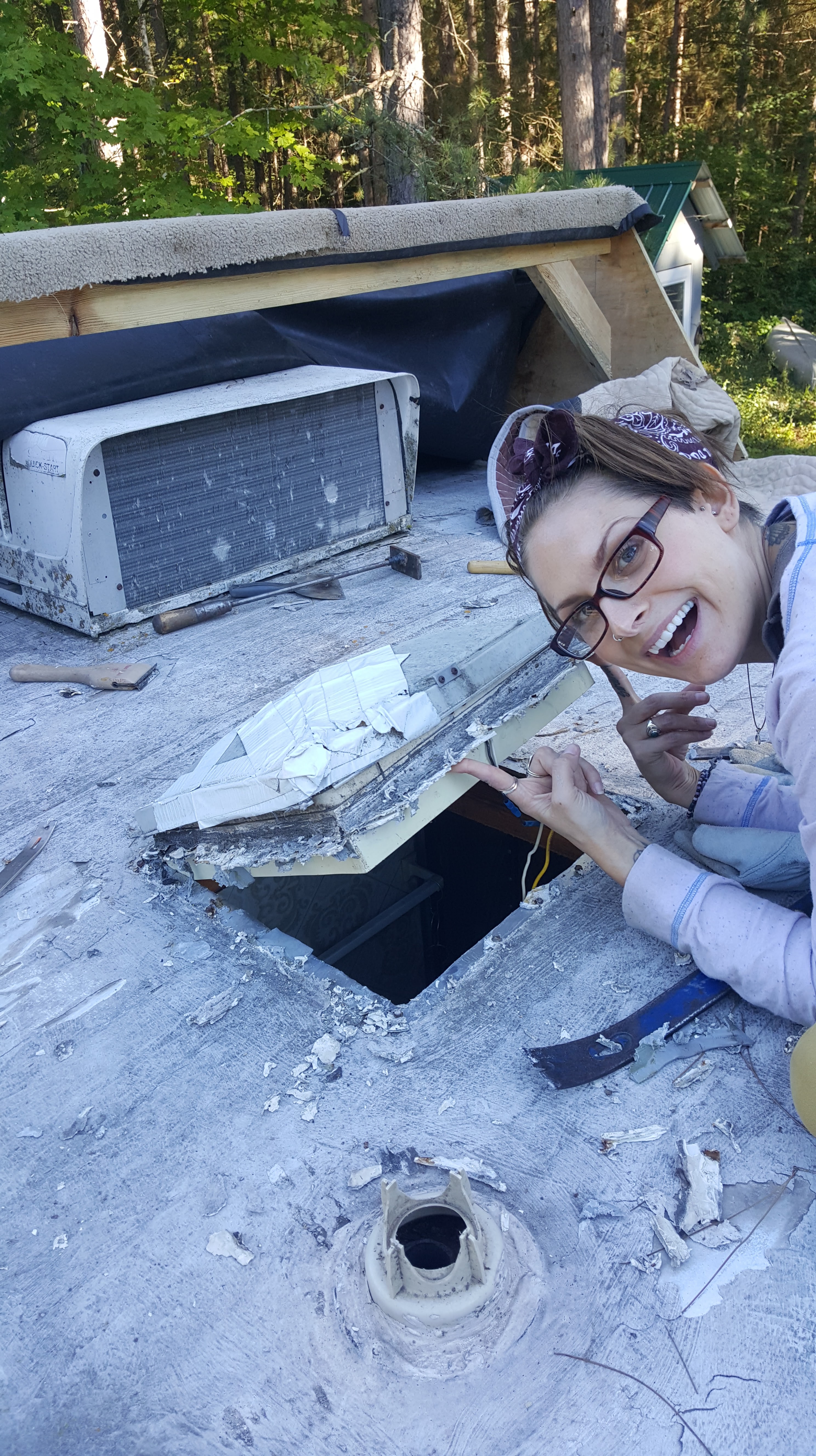 Now, on to the scraping! There was 38 years of goo I needed to remove and nothing but good old fashioned elbow grease was gonna do it. 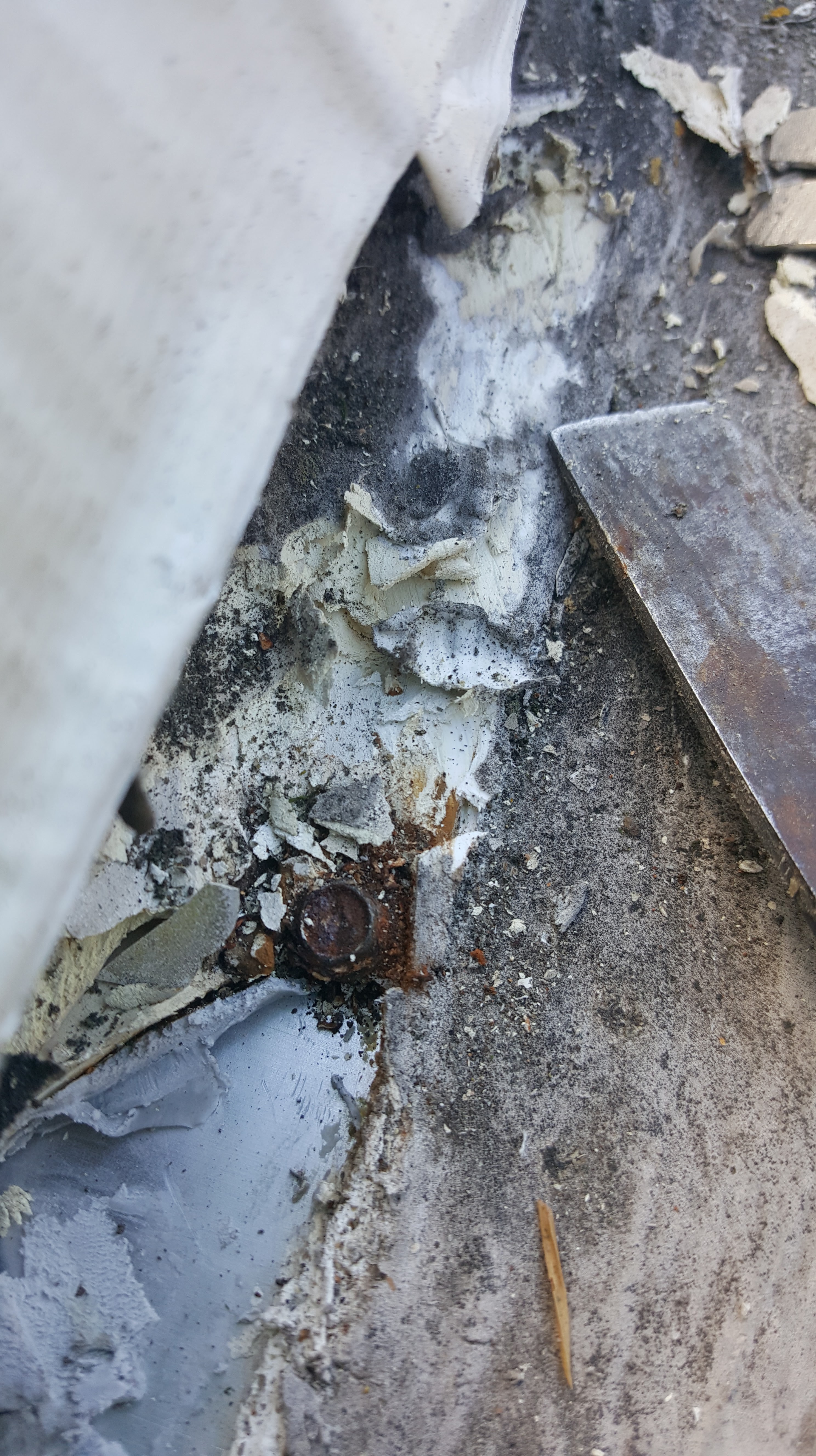 While I was busy trying to get down to shiny aluminum my Dad was busy rebuilding Mander’s back brace. He didn’t like that there was so much pressure being put on the railing. He built a new brace that put the pressure on bumper instead. 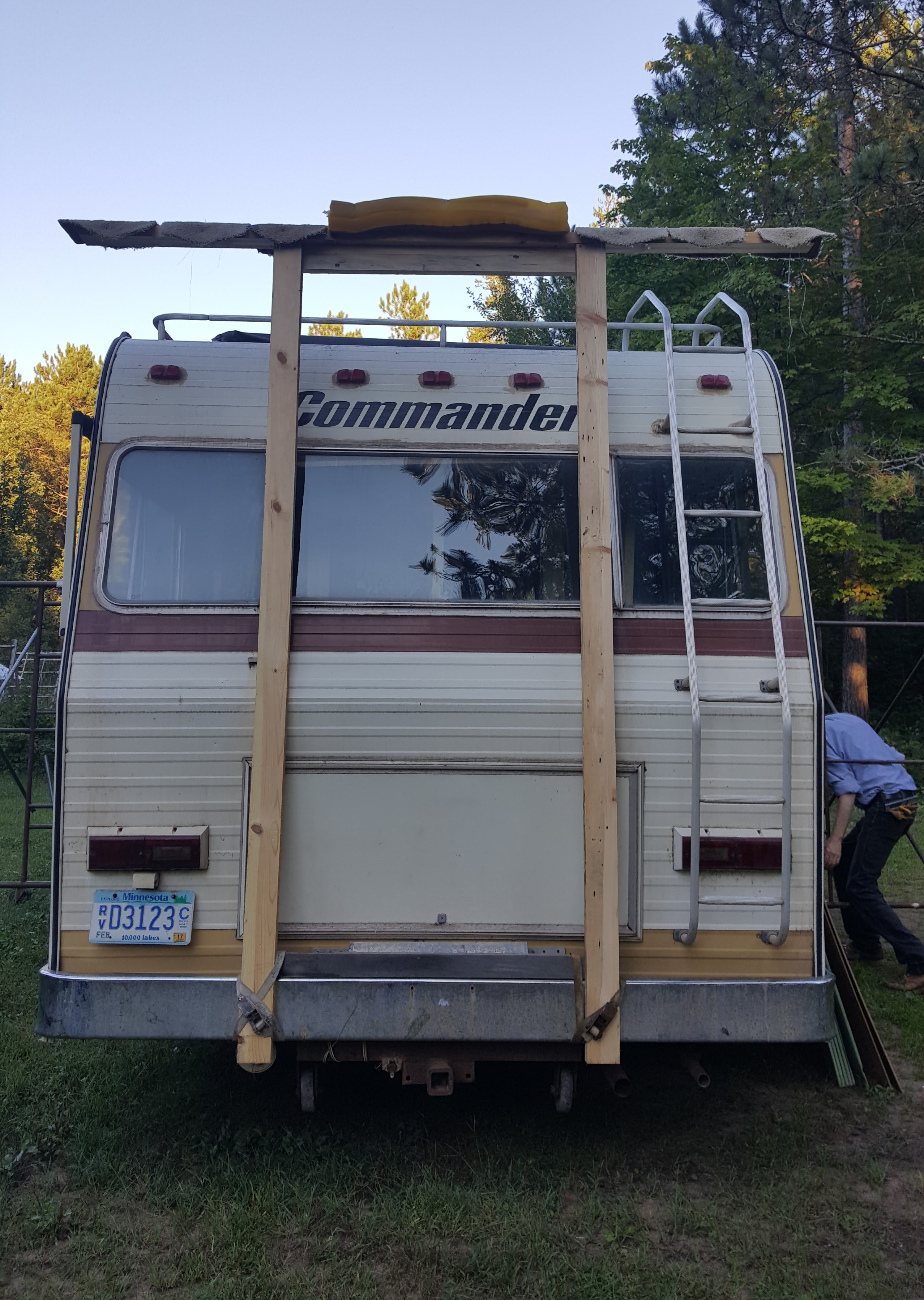 I broke up the monotony of scraping with some other tasks. Like giving the generator an oil change. I had previously searched high and low for an oil filter for this dinosaur but alas, could not locate one. We decided we would just pull the old one and take a trip into town to try to match it up with one at O’Reilly. After a lot of tugging, pulling and face full of rust later, the oil was draining! 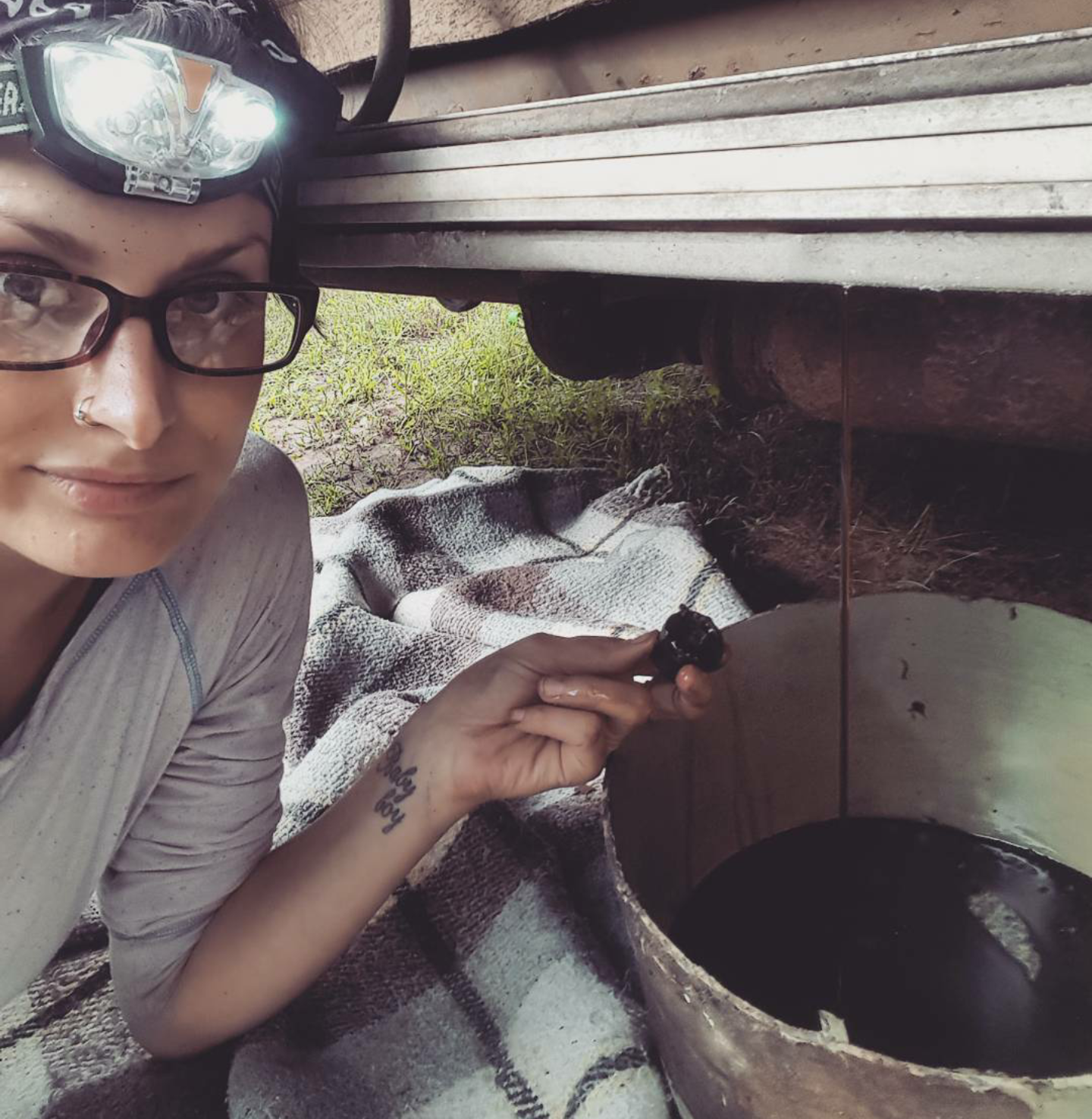 My Dad took one look at the oil filter and grabbed the extra filter he had laying around for his skid-steer. Sure enough, it looked like it might be a damn near perfect match! It spun right on, no problemo. We just needed to start the generator to see if the seal was gonna hold. If only it would start….we tried every combination of button pushing and lever flicking we could think of. Nothing. We thought we should try to change out the spark plug but unlike the oil filter, after a lot of tugging and pulling the spark plug would not come out. We didn’t have the right tools to get a proper hold on it (it’s a weird size spark plug) so we gave up. I have the socket size we need now so I will be armed with the right tool this time up. Also, after talking to Guy, I found out he had taken the generator’s fuse out and put it in the glove box for safe keeping. So I’m guessing that may have had something to do with why it wouldn’t start. LOL!

I also replaced the lock on the little door that protects my water from being fucked with. Which sounds like it would be a super quick , easy peasy task. Well, it wasn’t. The bar that pivots when you turn the key was not the right length. It came with two options and the short one was too short and the long one was too long. Of course, the original one wouldn’t just swap over to the new lock. Bah! So I had to cut the too long one and grind it until it fit. Plus there was a million tiny components to the new lock that I had to drop on the ground 100 times during the whole process but I did it!

Into day 3 of scraping and things are getting real shiny! I could have called it good enough a bunch of scrapes ago but ever since I was a wee one my Dad drilled into my sister and I that if you’re gonna do something, you do it right. Don’t half ass it! I think this turned my sister and I into a couple of perfectionists that have great work ethics, which is mostly a good thing. But also, might be the death of me when it comes to Mander.

Tomorrow I leave for another trip up to work on Mander. Today marks the first official day of fall which means here in midwest, it could freeze at any time. I need to prepare Mander for the winter so all her good parts don’t crack and break. I had originally set a goal of redoing the roof before winter. That ain’t gonna happen. That plan is thrown out the window. I concede Mander, I concede. Along with learning that there is usually a bunch of work you need to do before you can do the work you aim to do, I also learned that things are gonna move at TURTLE speed. I will have to find a balance of doing things “right” but also knowing when something is good enough to keep this project moving forward at any noticeable rate. I still feel like I got on a roller coaster that so far hasn’t been that much fun. I’m learning to lean into the turns, hold on for the dips and to throw my hands in the air and go WEEEEEEEEEEEEEEEEEEEEEEEEEE when I accomplish even the small victories.

If you’re working on your own hot mess of a roof and want to know more about the products I used, click on the images below!

← What a Guy
Striding and Soaring →