Have I hit my stride? Maybe so! This last Mander trip was a lot more successful than the previous ones and I left feeling like I have a better handle on things. Even though there were some not so great things discovered, I’m feeling a little less like a floundering fish out of water. I’m learning! Visible progress is being made! I didn’t even cry! Yay!

My Sister and Brother in law were planning a trip up to help my Dad with fall harvest so I timed my trip to coincide with theirs in hopes they would be able to lend a hand in between apple pickin’ and potato diggin’. My Sister did some extra harvesting work so Paul’s (my Brother in law) hands were freed up to help me. She even got her hands on Mander a bit as daylight was fading.

What a difference having extra help makes! My Dad has done a lot for me, helps as much as he can and I am extremely grateful to him. Unfortunately, he is limited by chronic pain and some days he is in so much pain it hurts to move at all. So we were both feeling grateful for the help. Paul is more than capable when it comes to doing handy things so he didn’t need much direction other than putting some tools in his hands and showing him the thing that needed doing. That freed me up to work on other things. More than one thing getting done at a time….WHAT!?? Mind blowing. I was more than relishing in it.

I’m still dealing with moisture being trapped in one wall in particular. As we are tearing into it we are realizing that it’s almost entirely compromised. On the agenda for this trip was to open the wall up even more to pull out all that rotten mushy wood. Behind this mush wall was a bunch of rusty screws that all needed to be removed.

In between wrestling rusty screws and pulling out mushy wood we were making progress on other things! We were able to finish what we started with the generator when we got the 38 year old spark plug pulled, replaced with a brand spankin’ new one and the fuse in. It started right up (head to A girl and her commander on instagram to listen to that baby roar)! But then it wouldn’t turn off……LOL! This generator is damn near deafening so we all were kind of scrambling to figure out a way to make it stop. At a loss, we pulled the connection to the spark plug. Well, at least we know now that it runs.

Next up, winterizing Mander. This process helped me learn a lot of things about her. I had tried to hook up water a couple months ago and it came flooding out under the kitchen so I knew I had a break somewhere but I didn’t know where. This was a mystery I had been thinking about often and wondering how bad it was going to be when I found it. Turns out, not so bad! Blowing out the lines helped us locate the break and it just happened to be in a small section of the water line, in between two connectors, located in a pretty accessible place. Shouldn’t be no thang to swap that out! That’ll probably only take me 5 mins, right Dad? 😉 But really, it could have been so much worse. 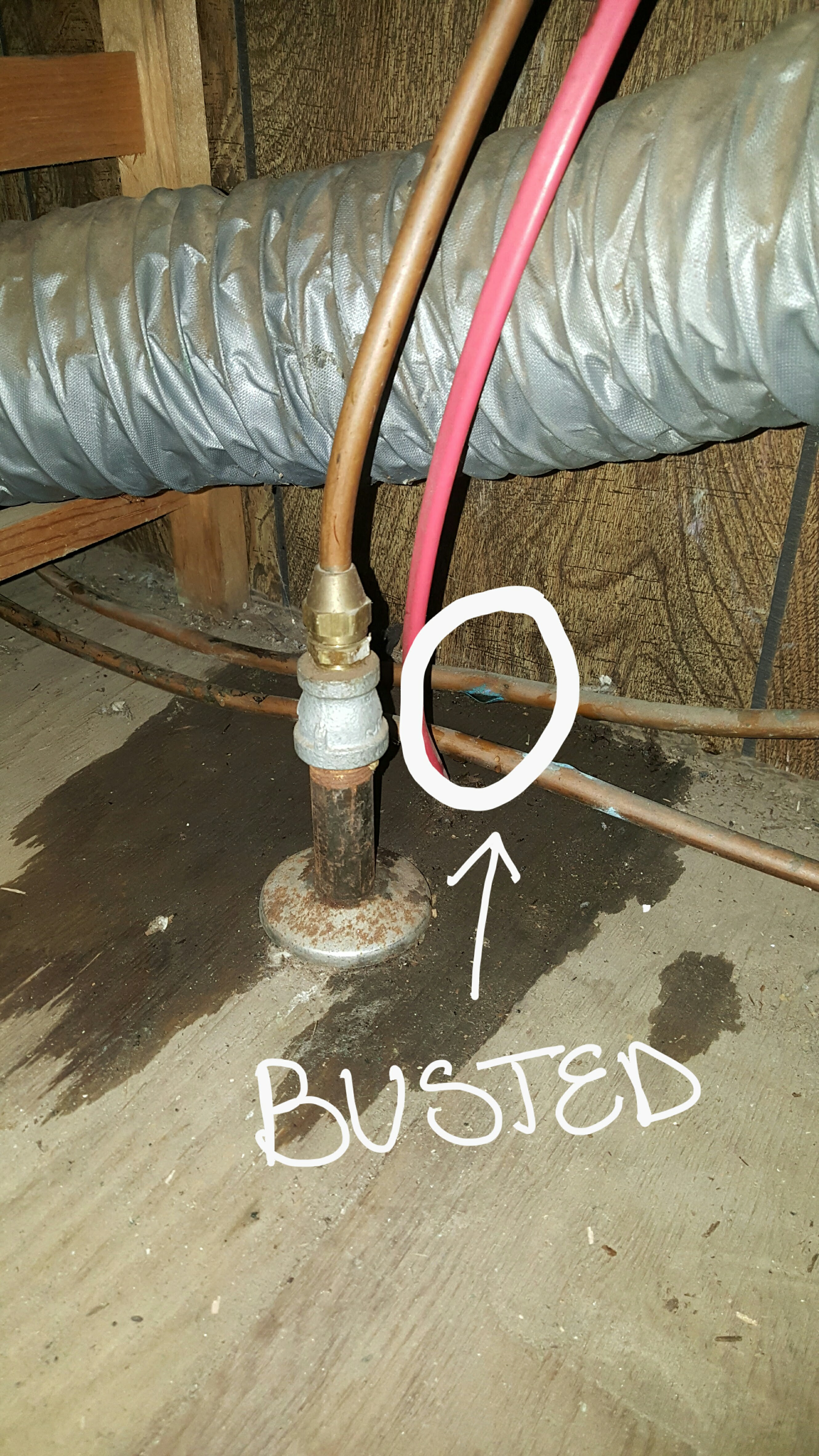 Then I finished off the demo by ripping out the remaining cabinetry. This is a before and after photo of where the composting toilet will go!

I saved that amazing mirror and storage cubby but the rest got smashed and trashed! Right now my bathroom looks like this….

Currently, you can shit and shower simultaneously if you don’t have a claustrophobia attack and go running out in the middle of everything. That doesn’t bode well with me so I will be taking out the toilet (*shudder* can’t wait) and turning the space into just a shower stall. Then I will build an addition where the now demoed bathroom vanity space is to house the composting toilet. I’m weirdly excited about a composting toilet.

Another unexpected treat from this trip was the bonus family time and the support I received from them.  This is a labor of love for me so when people are critical and unsupportive it hurts my heart. It’s harder to shake off than your normal everyday naysaying. On the other hand, when I get cheerleaders and words of encouragement it makes my heart soar!  My Great Aunt Mary was visiting from Oregon which is not something that happens often. Last time I saw her I was maybe 10. She’s a cool lady that has done some motor home traveling for months at a time and had a lot of great things to say. My personal favorite was after checking out Mander she said, ” I can see this has a lot of potential.” Soar. My Sister saw Mander for the first time and said, “When you get done with this you’re gonna feel so good because you will have touched everything and feel very confident in what you built.” SOar. Then my Aunt Jenny stopped by whom I haven’t seen in years and wasn’t even fazed by the mess Mander was. She immediately started talking design ideas with me. SOAr. My Aunt Audrey and Grandma are continuously applauding the progress we make each day. Even if it doesn’t look like much. SOAR!!!!!!! Oh great, here’s those tears I’ve come to know so well but this time they are all happy.

7 response to "Striding and Soaring"

If you've been following me for a while, you may have noticed that I don't give up very easily. Who knows if it comes from pride, stubbornness or just plain tenacity but it's certainly come in handy since becoming a nomad. 😂 Even though my blog is more than a year behind, I haven't given up on it! It's hard to find the time and energy to sit down and tell my story in long form. But when I do, I quite enjoy it and fancy myself a pretty good story teller. This is a picture from my latest blog entry which is up on agirlandhercommander.com (or click the link in my bio) If you have time to kill, you may wanna start at the beginning of my blog entries-Mander's inception! It's been a wild ride! 🤘 #vanlifecommunity #homeonwheels #fulltimerv #livethelifeyouwant #solofemaletraveler #femalemechanic #diymechanic #freedomvessel #lifeontheroad #modernnomad #notafraidtogetdirty #rvlifestyle #realvanlife
If you don't turn the arm of a chair into a proper scratching post are you, like, even a cat mom? #moonchi #scratchandrelax #travelingwithcats #ifyoucantbeatthemjointhem #catmomgoals #catmodel #sittingpretty
FINALLY. I have my bedroom back. Swipe to see how I rebuilt my bed platform using free Ikea slats that I couldn't be bothered to cut and a pack of $35 decking tiles. (Thanks @kelly.e.lusk for the idea!) The very last photo is my old mattress. I had already removed one moldy cover and it was still this moldy inside.🙈🤢😷 Vent your bed nomads! Vent👏your👏bed👏
Sometimes it's gotta get worse before it can get better. After a week of cleaning, painting, hella loads of laundry, a couple days off for lung recover and living in general disarray, I'm finally nearing the finish line of this mold drama! The last 2 things I was waiting for to rebuild are supposed to arrive today. I may not have everything 100% finished by tonight but there's a decent chance I'll be sleeping in a new, big, mold free bed. 🤞 #whatadisaster #invisibleenemy #realvanlife #realrvlife #livingtiny #oyvey #solofemaletraveler #notinstaworthy #therealdeal
Life's a real b**ch sometimes. In case you missed my stories the last few days....you know what a good distraction from Corona virus is? Finding out your mattress is hella moldy underneath and needing to dismantle your bed platform and clean everything like your health depends on it! ⁣ ⁣ Turns out you need to have venting of some sort to keep your mattress from collecting moisture and starting a mold factory. 🤦‍♀️ When I shared all this on my story it was crazy how many "this happened to me too!" DMs I got! So let this be a PSA and get some venting under your mattress before it's garbage like mine. 😭⁣ ⁣ In all seriousness, this was really affecting my health. For the last few months I haven't been able to figure out why I felt so run down all the time. Why my skin was so bad all the sudden. Why my asthma, which is normally nonexistent, was bothering me almost everyday. Why I felt so apathetic. Why I was having sinus issues. I thought maybe I was fighting a cold/getting old/allergic to Washington/hormonal. Now I know I was just sleeping on top of a pile of mold! 😂 I already feel better since cleaning everything and I'm anxious to get my ass back to the desert where RVs belong.⁣ ⁣ Today I am painting, rebuilding and picking up a cheap mattress and hopefully by tonight, I will have a safe bedroom to rest in. 🤞
A pretty kitty to brighten up your feed. 😘 #travelingwithcats #cheerupcharlie #mainecoonsofig #vanlifediaries #solofemaletraveler #womenontheroad #catmodel