Posted on October 21, 2016 by agirlandhercommander 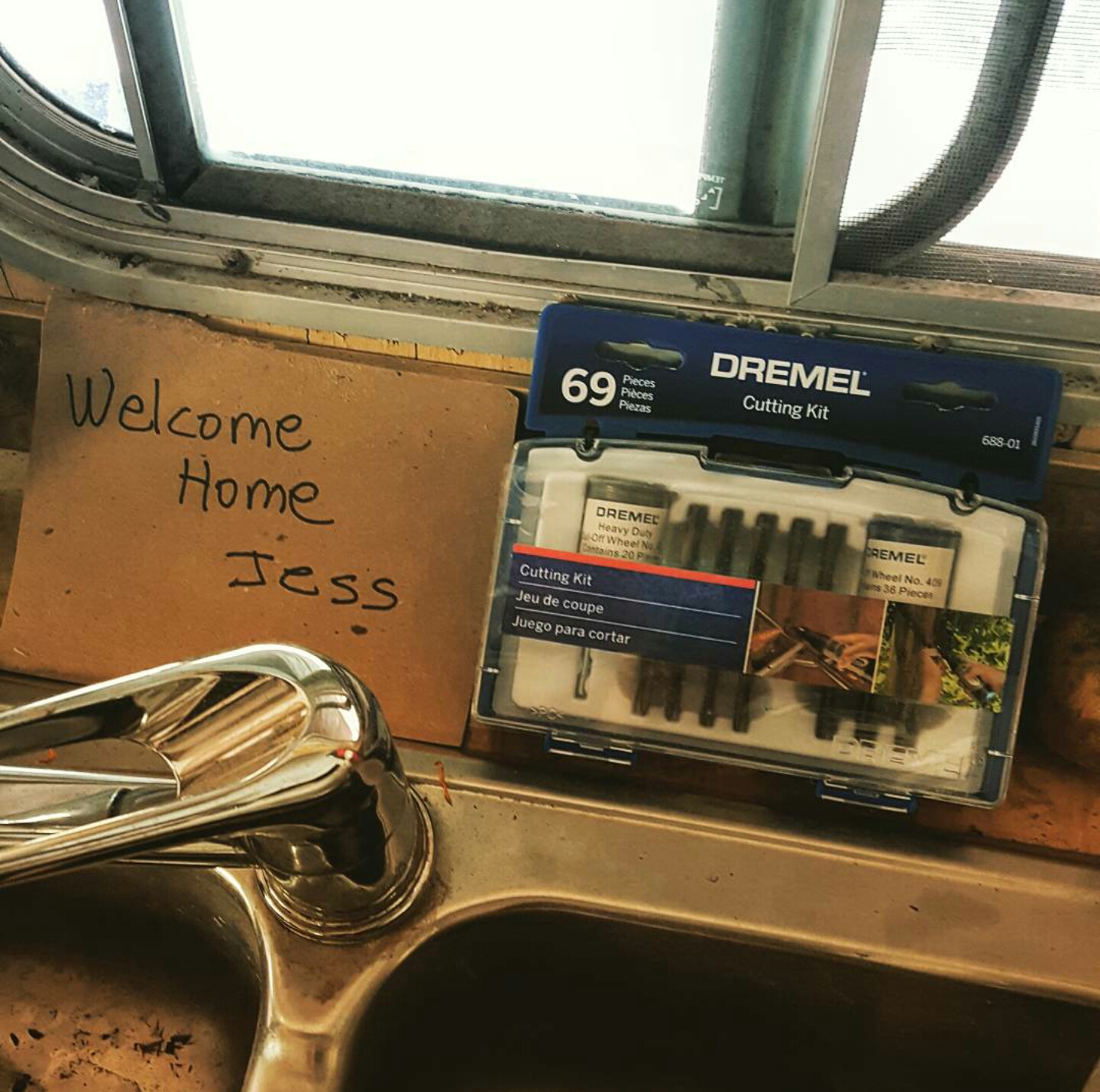 I started out this trip kinda pooped. I had been working a lot beforehand and really wanted to chill out and enjoy the beautiful fall weather. So the first day I mostly putzed. I laid in bed and then I got up and putzed. After that I laid outside on the ground, looked up at the sky, got up and putzed. Then I took a nap. Then I woke up and got some serious putzing done.

My nose brought me to the trunk. There was a super stinky rotting mouse in there I needed to evacuate. Of course, as per usual, I had to do stuff before I could do the stuff I was aiming to do. I had to loosen and take off rusty ratchet straps that refuse to let go and have my Dad help me pull off the brace that was blocking the trunk and holding up the tarp. Only then, was I able to get in there and clean it up. Even so, it was a relatively quick and satisfying job. It’s nice to throw some of that kind of work in because almost everything else is arduous and slow going. 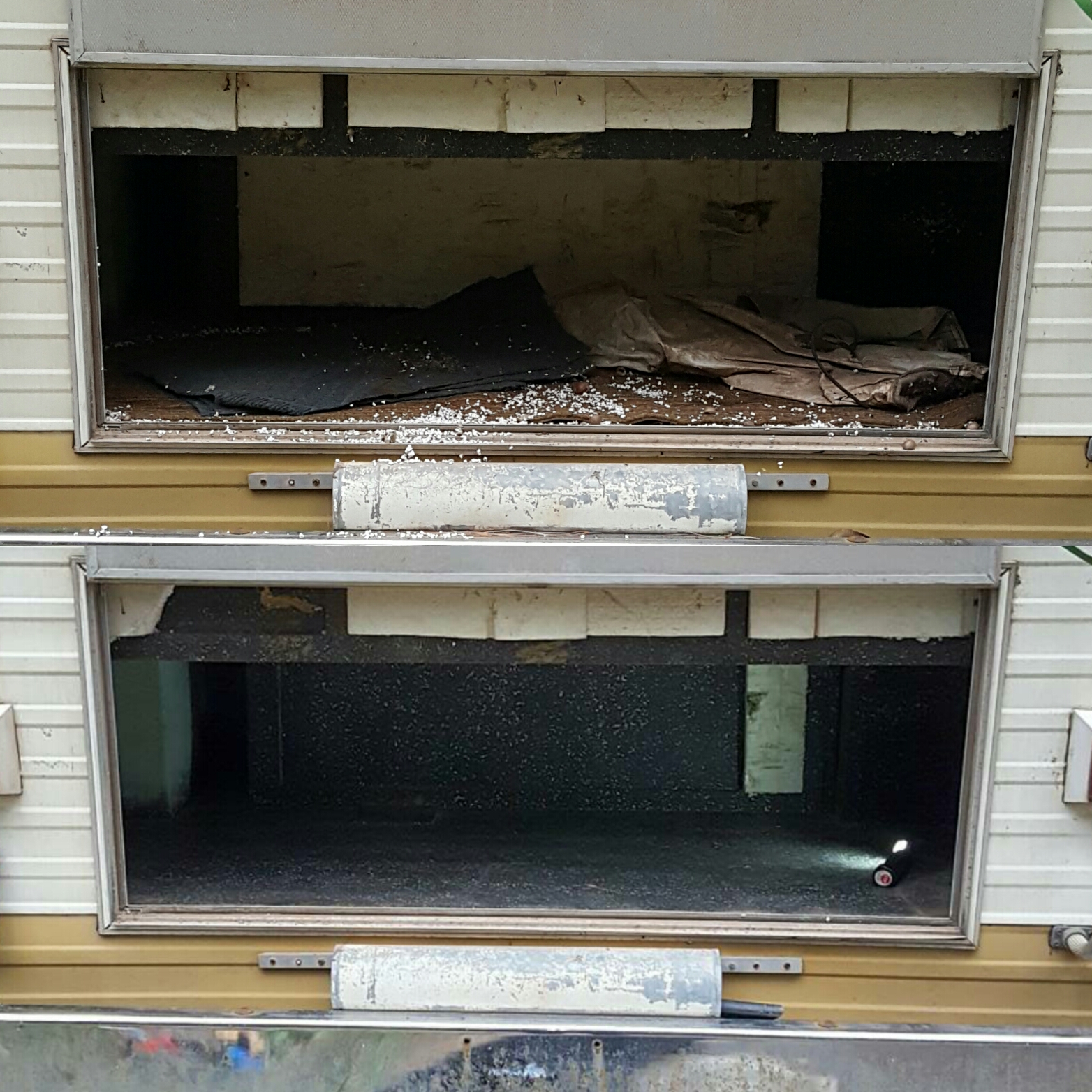 It’s becoming clear that I’m probably THE Dremel Queen. I’ve taken to using the dremel for most things from a lack of a better tool and I’m getting pretty darn handy with it. When you’re trying to work on busted up walls and there’s nothing left but jagged pieces of wood and a thin sheet of aluminum, precision is key. Dremeling takes forever but at least I don’t slice a hole through Mander’s skin. 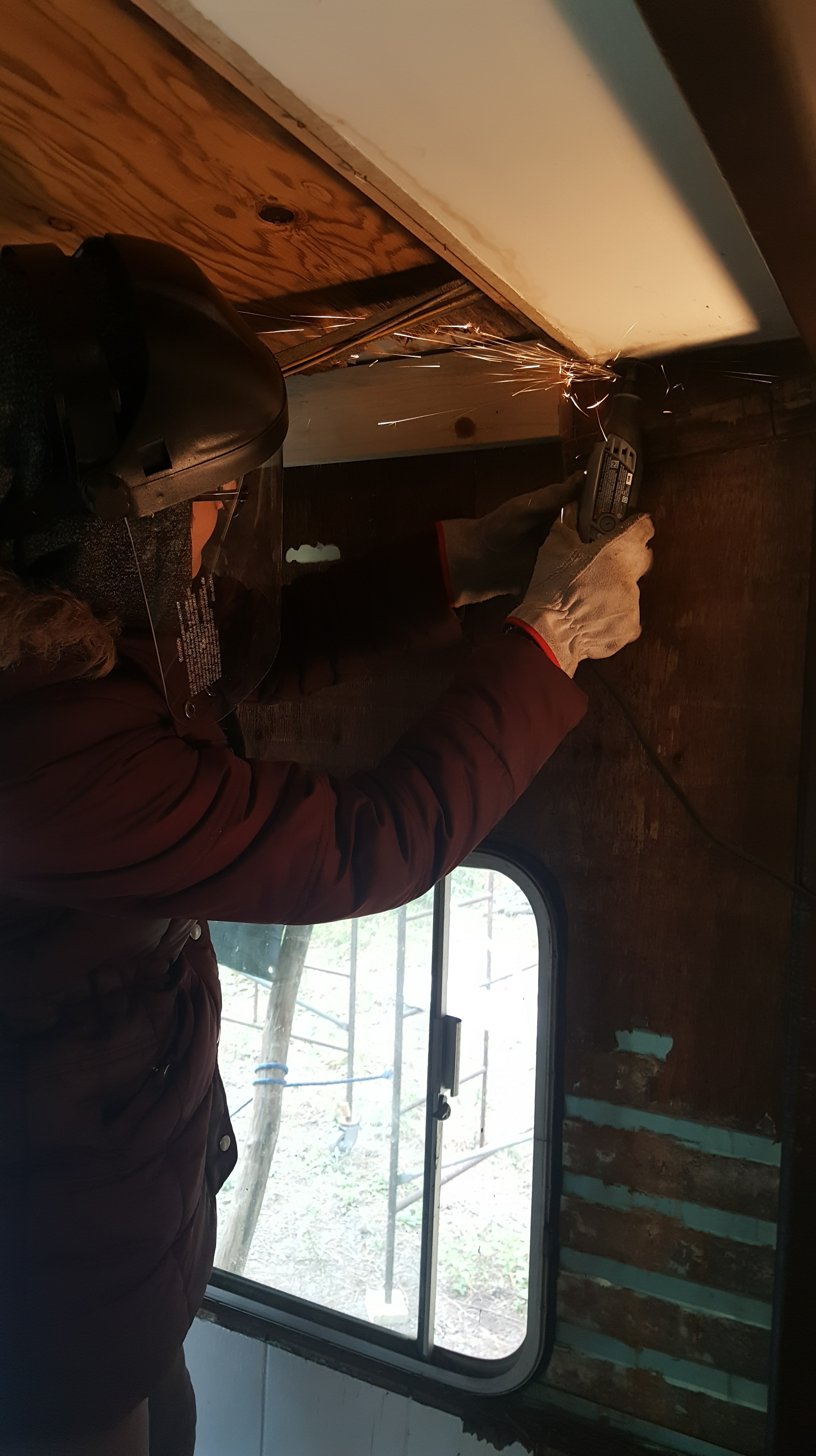 After all that putzing it was time for bed. Let’s talk about my lofted bed! It’s partially to blame for my lack of motivation. I have a nifty bed box mounted to hinges above the driver and passenger seats. You just pull down on it and it lowers, creating a pretty decent sleeping space. I picked up a mattress off Craigslist for $40. It is really just high density foam from an Ikea bunk bed but it had a nice cover that I could zip off and wash so I didn’t get little kid cooties. This is my bed while Mander is under construction but will become the guest bed when she’s finished!

It was probably a good thing that I spent the first day putzing because my friend, Eric, was due to arrive bright and early the next day! I was feeling rested and ready to rock. First order of business was to have a good long discussion about whether more of the wall should be torn out. After a lot of hemming and hawing, I made the executive decision to go for it and thank god it was the right call. 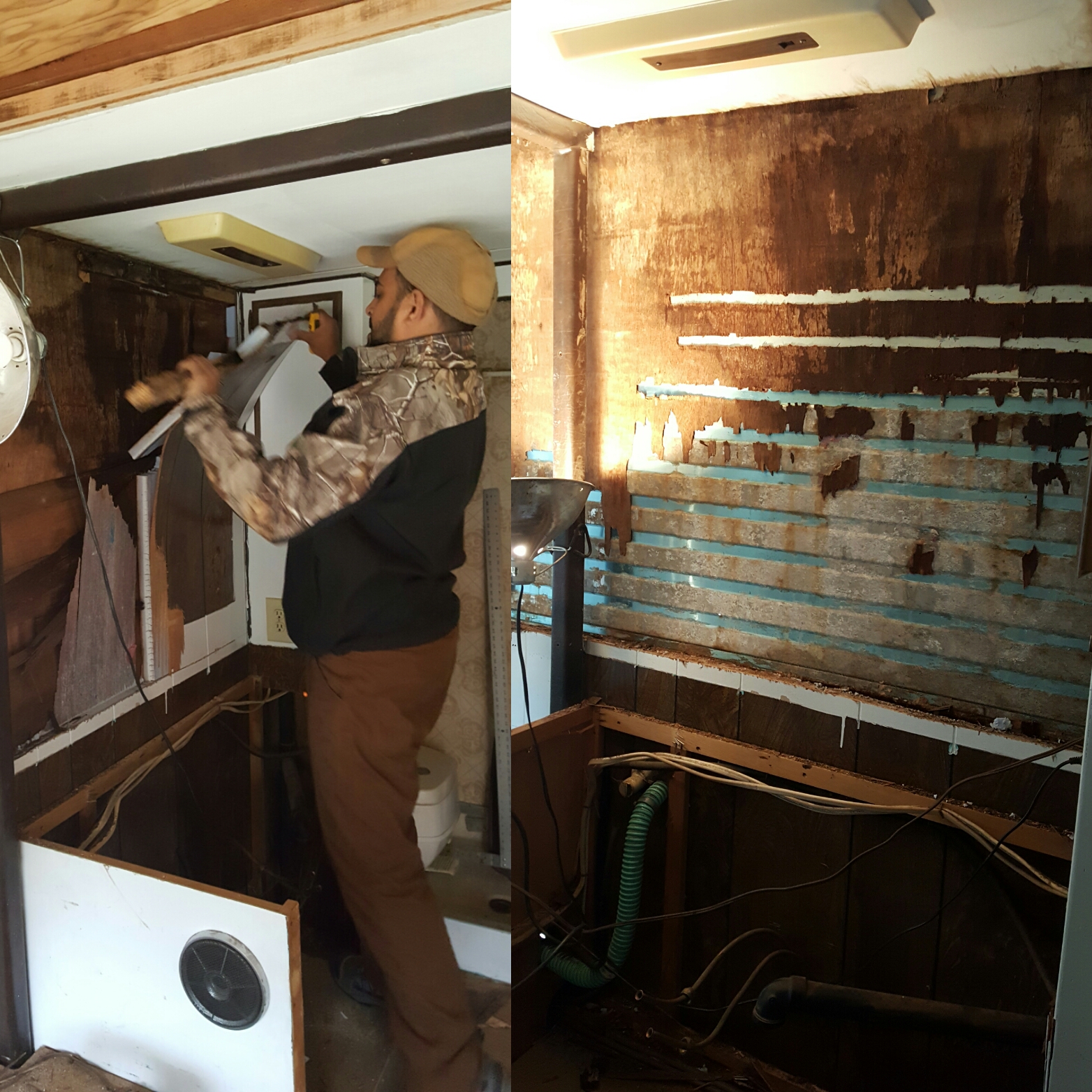 It was pretty wet behind there and  we were able to get a better wall frame in since the 2×4 could span a longer distance. I know it doesn’t look like much but it felt great to give that wall some permanent structure! 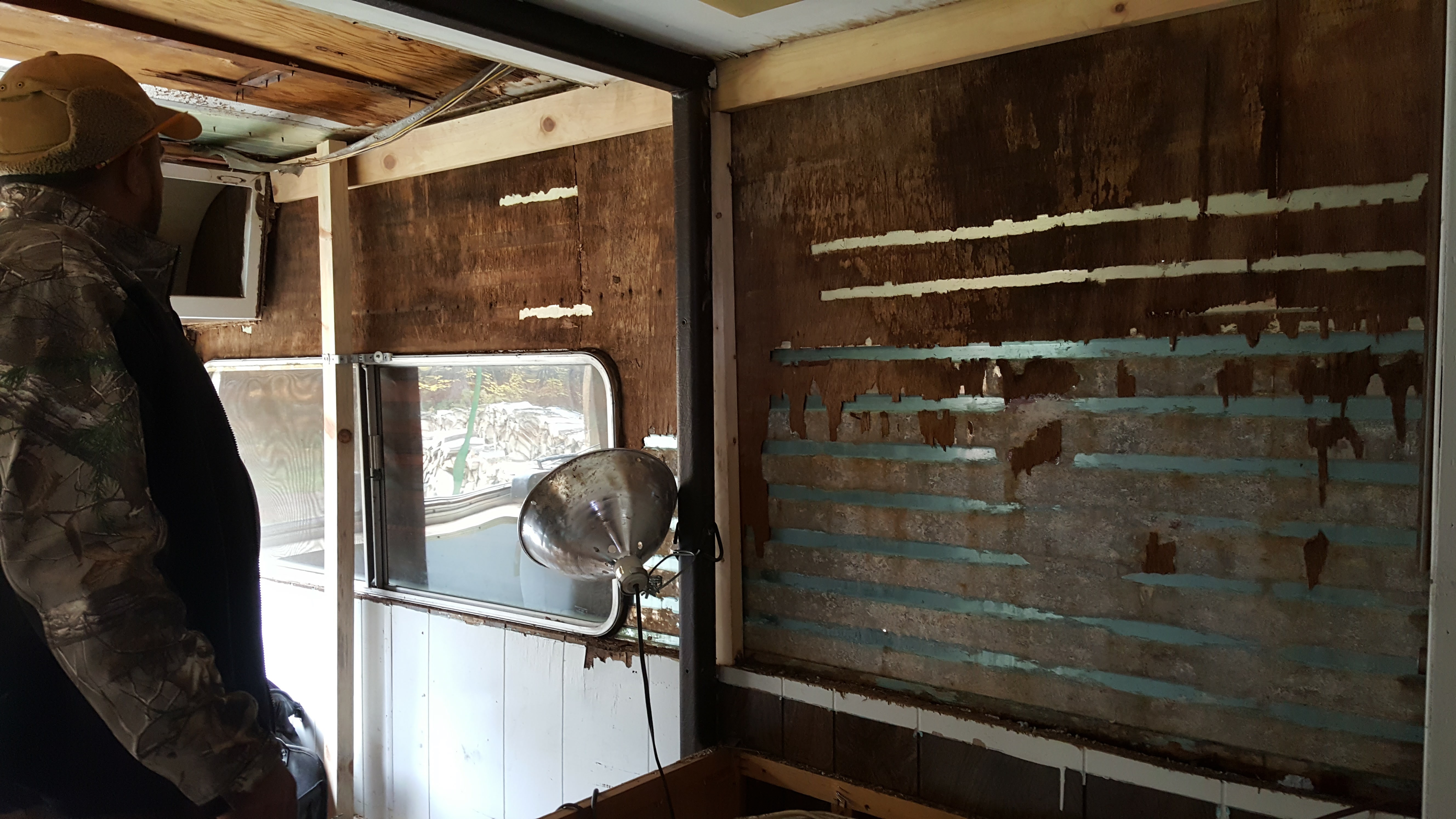 Mander is going to need a lot of jewelry on the outside to help firm everything up. I’m not the happiest about this but I say nothing can take away her beauty. I had removed all the old rusty screws from the roof and scraped the track clean. We used screws on the outside with rubber washers to screw into the frame on the inside from both the top track and into the aluminum wall. This zipped everything together nicely! Well….nicer than it was before. The finished product looked a little wonky but it was better, nonetheless. 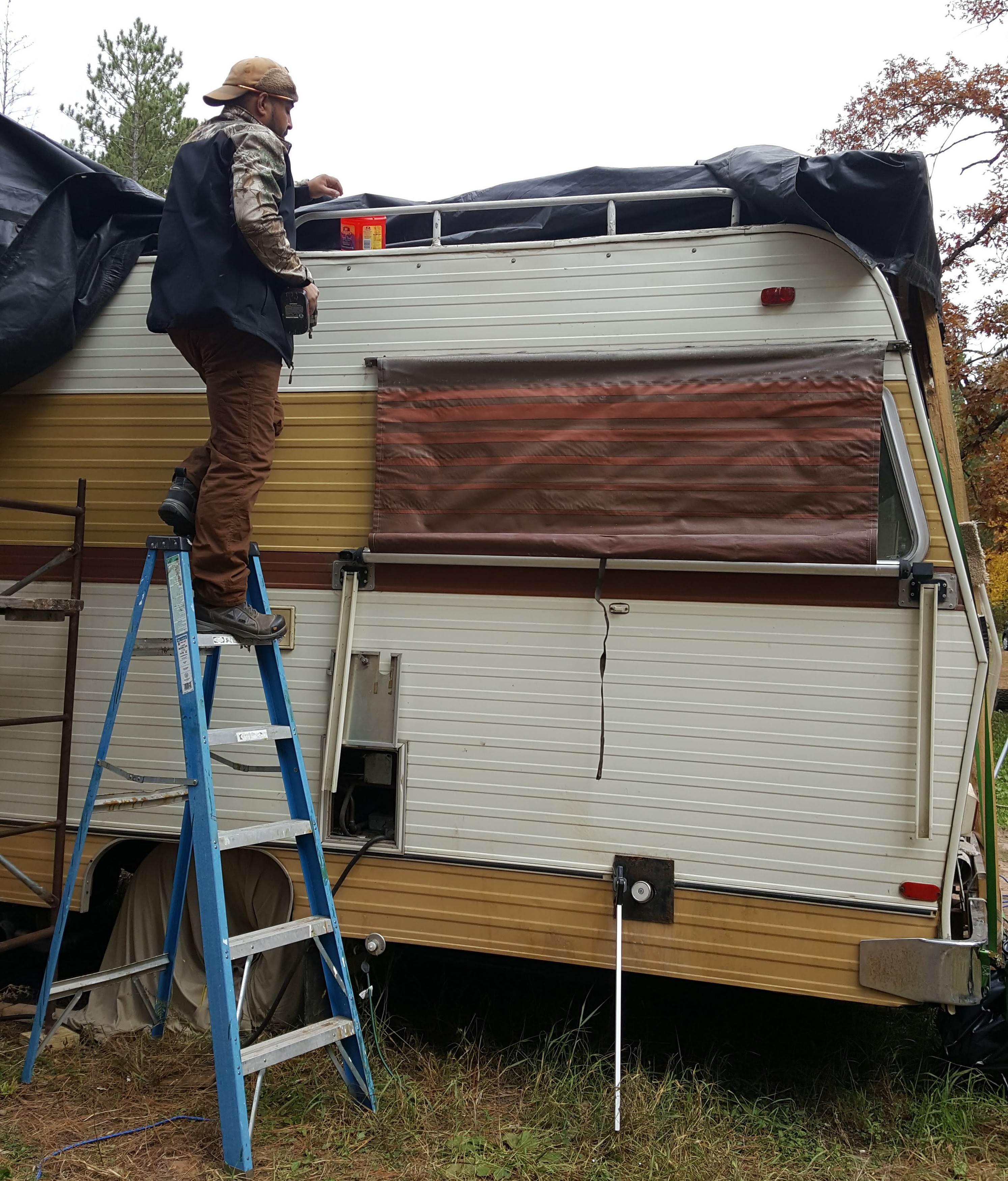 After we got the wall framed out we moved onto getting the ceiling built. Eric did the more complicated wood working while I did…what else….dremeled the other wall!

This side of Mander wasn’t nearly the big soggy mess as the one we had already torn out. I cut away the area that was the most compromised and it created just enough room to put a little over a foot of wood to screw into. The boys put the finishing touches on the new ceiling and up it went!

And with that Eric was out! He gave me a solid 10 hours of hard labor and I was super proud of what we accomplished. Mander is probably more structurally sound than she ever was. I wish I could have friends help all the time! The progress is so much more noticeable and it makes me feel like maybe I might actually finish this project someday. Feeling pumped from the work he and I did, I kept at it after we said our goodbyes. I decided to give a new meaning to “hugging the toilet” and take the useless thing out. First, I got a pry bar under the middle lip and looked like a goddamn maniac while I tugged and pulled as hard as I possibly could. It would not budge. So what’s a little Dremel Queen to do? Dremel dat shit! I cut a “door” so I could get my arm in there and take the nuts off.

After hugging the toilet for an hour or so, I showered all the gross off me and called it a night. I finished removing the toilet the next day and encountered another problem. The toilet seal is bolted down and the bolts are RUST-TY. I tried to drill them out but the drill barely made a dent. I had to return home so I left the job unfinished. I have big plans to remedy the problem with the dremel when I return though. Hahaha.

A big fat shout out and a heartfelt THANK YOU to Eric! This guy started out as my boss and ended up becoming a gem of a friend. The kindness involved to take time out of your life, drive 2 1/2 hours to help your friend for the day, is not lost on me. That’s a special kind of person and I have nothing but gratitude for his existence in my life! Love you Best Boss Friend! 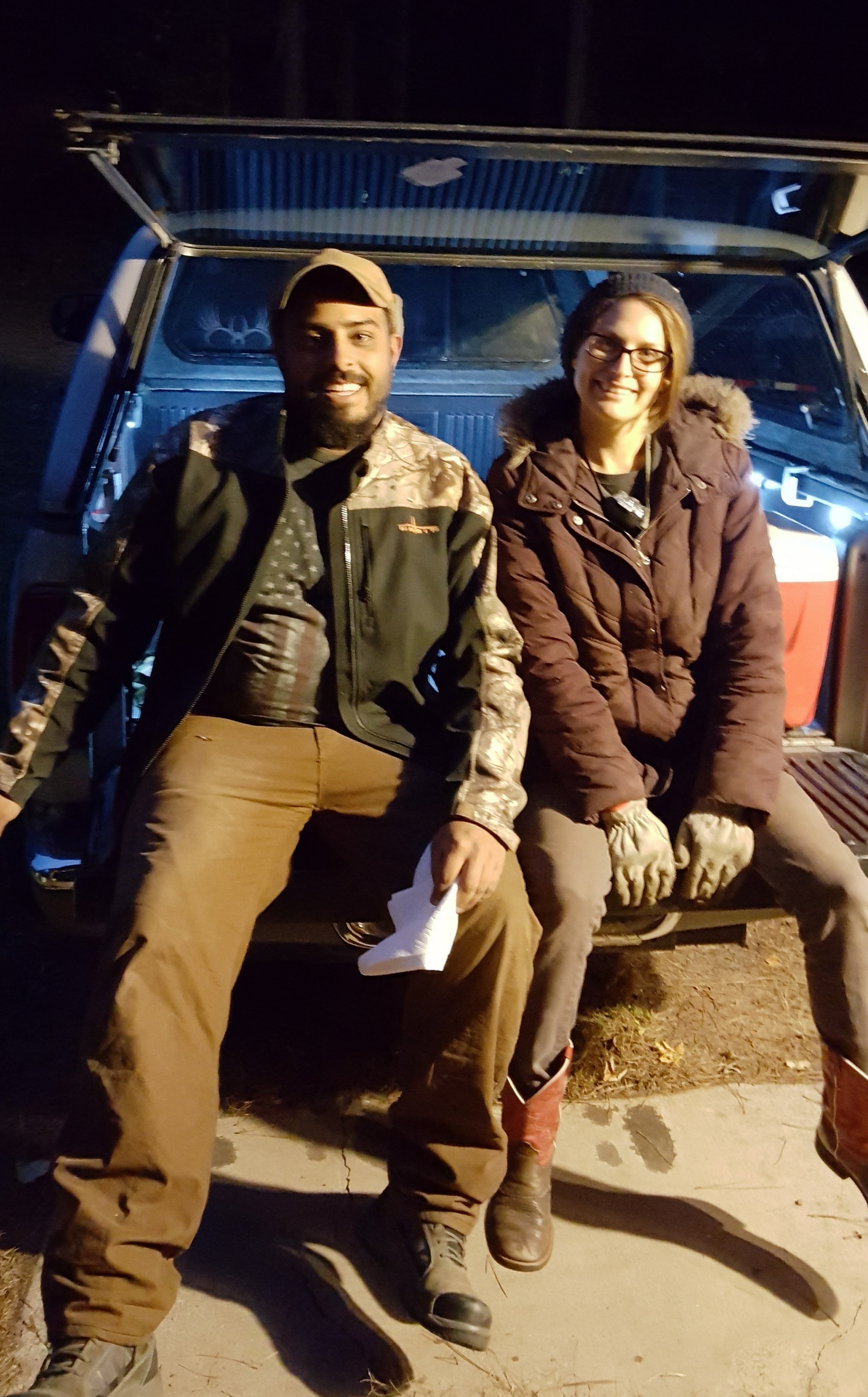 ← Striding and Soaring
Up, Down and Then Back Up Again →