Up, Down and Then Back Up Again

Posted on October 28, 2016 by agirlandhercommander 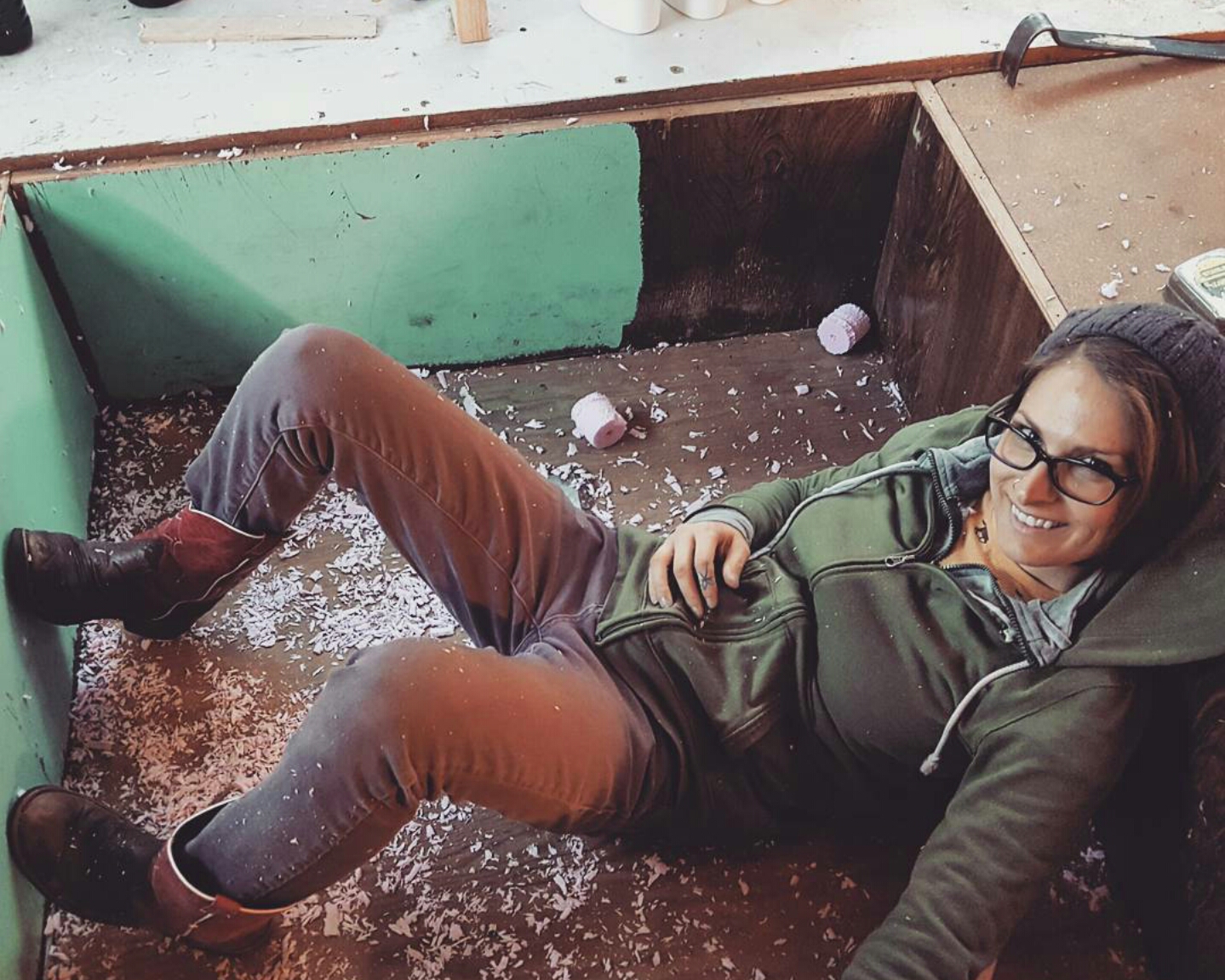 I marched into Mander armed with peppermint oil and sage. I dispersed the peppermint oil onto cotton balls and placed them where ever I thought little mousies would like to hang out, chew on things or crawl off to die. Then I lit that sage up. After I’d completely smoked myself out and it smelled like rotting peppermint mice bodies, I was ready to get to work! I had left that stupid toilet ring in frustration last visit and I was about to make it my bitch. I dremeled around the rusty, unmovable screws to free the thing. But after I freed it, I noticed it seemed to be attached to my holding tank. My Dad and I did some investigating, both inside and out of Mander, and we determined it had threads and needed to be spun out. So he held it up with a pry bar over the piece that was still screwed down and I hammered it around until it finally came out! Success! Then I had to work the individual screws out with a variety of dremel, pry bar and vice grip techniques. 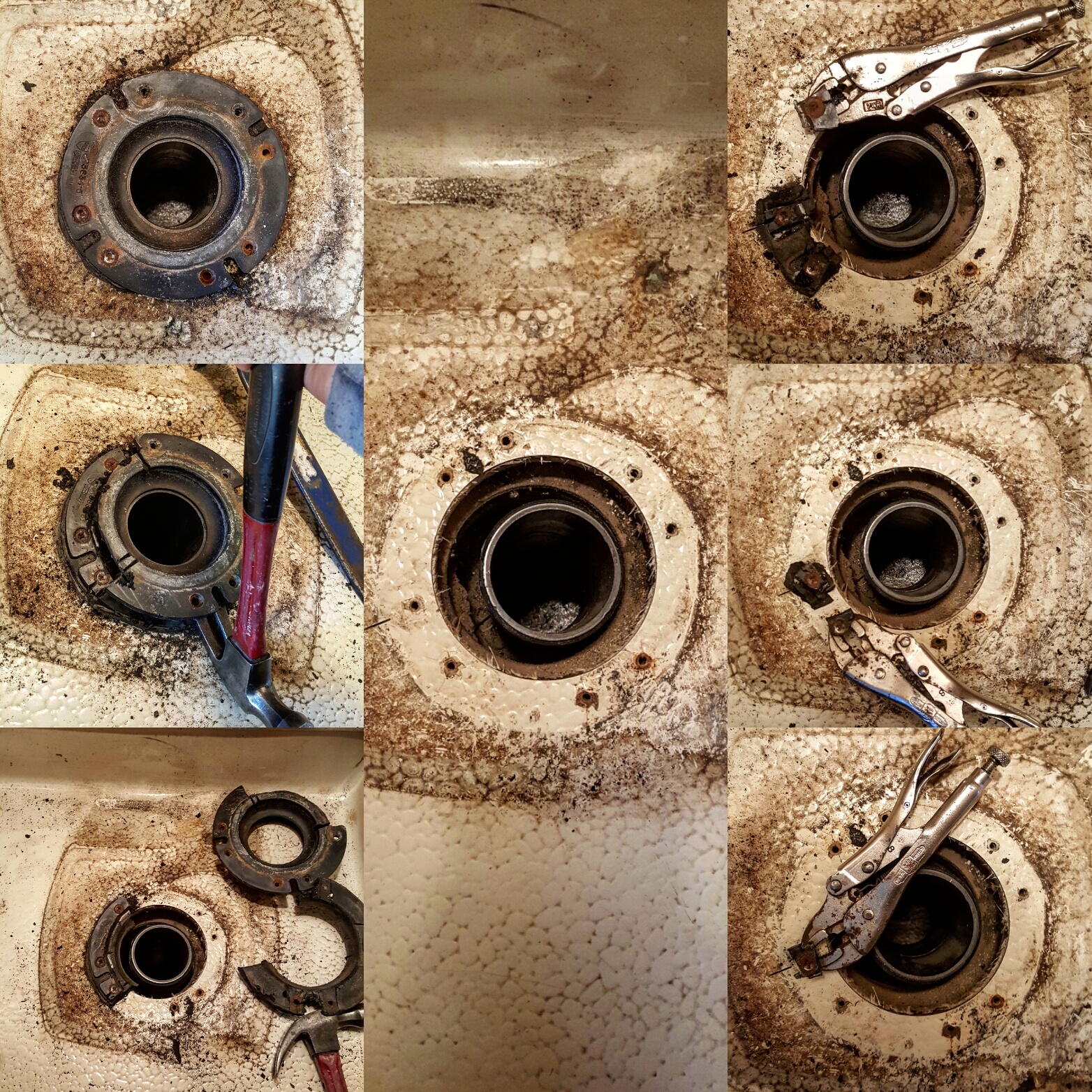 Crossed that off the list! Now onto the ceiling. We had gotten it up last visit but we had to hammer it in which meant it didn’t quite fit right. Also, there were some electrical wires that we fed through and my Dad didn’t like that they were pretty bent. So down came the ceiling. It was tough not to be saddened by this. Even though I knew it would be going back up shortly, it was hard to see work be undone.

With the ceiling down, I was able to take a little time to do the things that we missed the first time. There were a few rusty screws in the way of a happier fit and there were some holes that wouldn’t mind some eternabond for extra leak proofing. I cleaned all the holes up with acetone and put little eternabond patches on them. 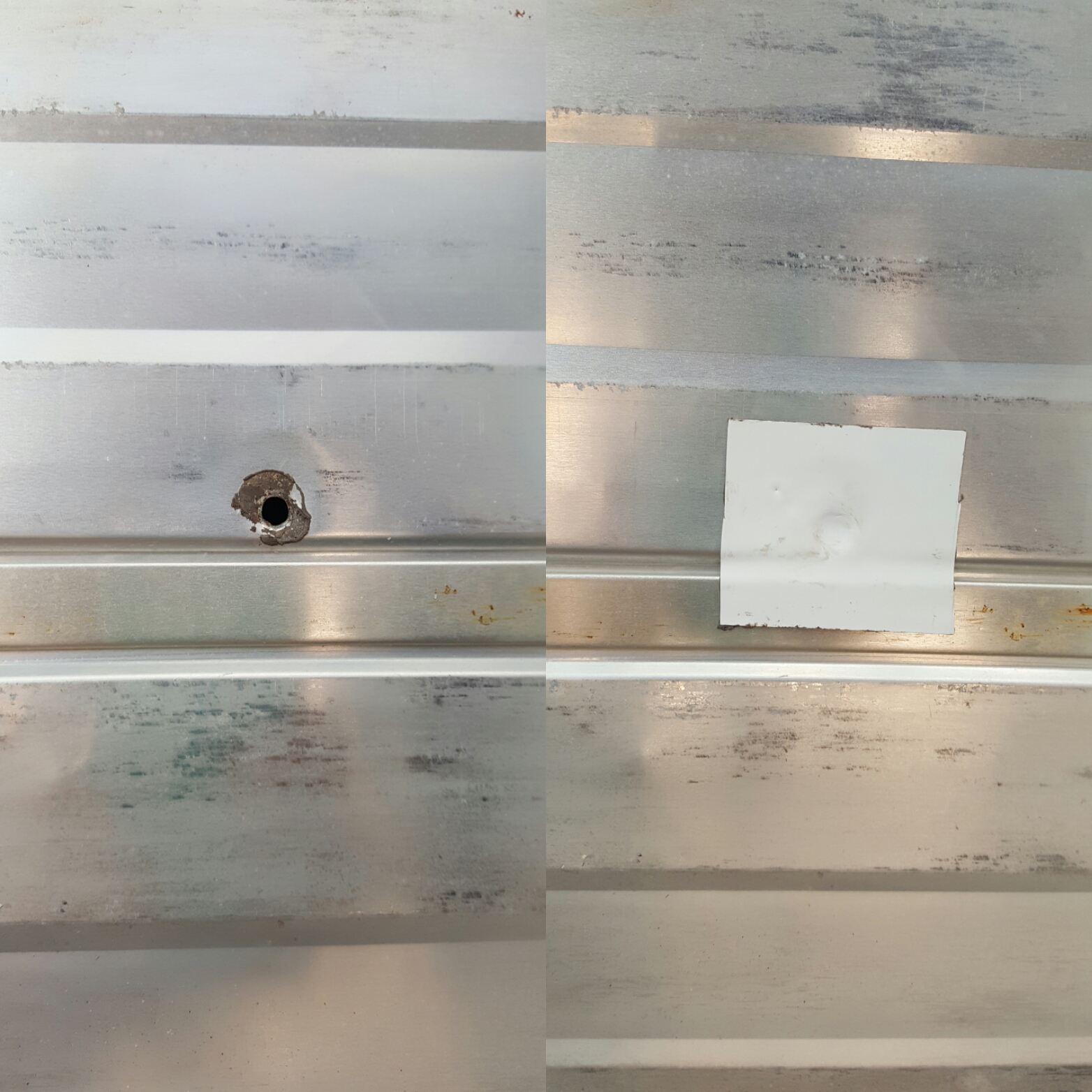 I wrangled out the few rusty screws I had missed and my Dad sanded down the ceiling a bit so we wouldn’t have to hammer it in. We added some glue to all the contact points this time and put ‘er back up! The wires were directed into a better position so they wouldn’t crimp and everything was screwed in. Next up, insulation! I worked on cutting out insulation for each one of the cells. What a mess! Cutting 2″ insulation with a stanley knife that doesn’t make it through is not a pretty sight. But I did it!

You know what’s always a good time? Wrestling Mander’s ridiculously heavy tarp! With snowfall in the near future, we have to change up what is happening with the tarp situation. Initially, I had taped all the holes with duct and gaffers tape. We have the tarp ratcheted super taut over a peak we built in the middle. If there gets to be a big, wet, heavy snowfall, this setup will not hold. So my Dad and I heaved and pulled that thing down to the ground so I could do some work on it. I purchased some serious glue that came with 12 pages of warnings to reinforce the patches. I wasn’t excited to be dealing with patching that thing all over again, or inhaling a bunch of fumes for hours but it sure was nice to see Mander in all her glory! I had kinda forgotten how utterly awesome she looks. 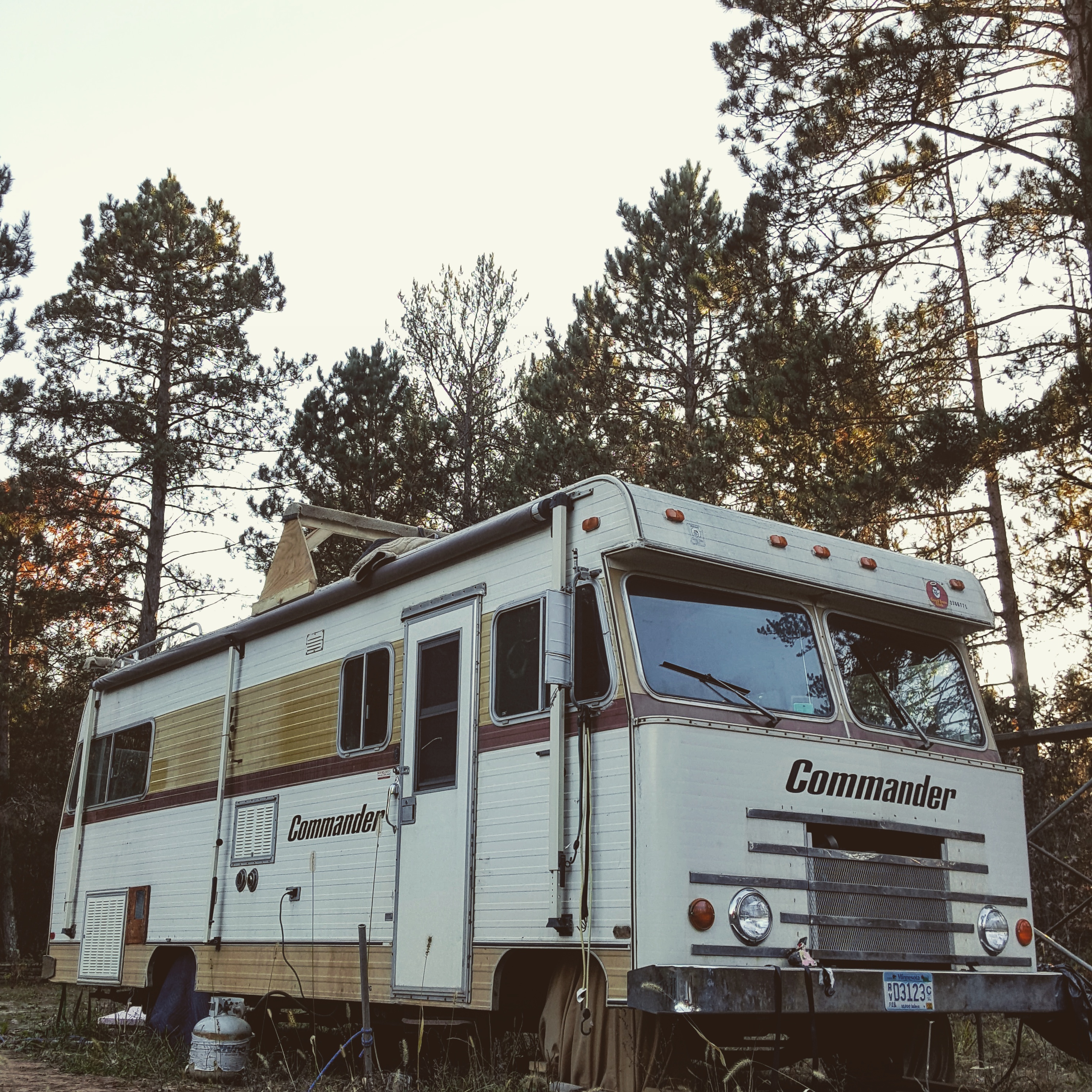 My Aunt and Cousin, Kendra, stopped by for a visit and I jokingly asked my cousin if she wanted to have a patching party with me….and she agreed! I was elated! The next morning we started huffing fumes together. 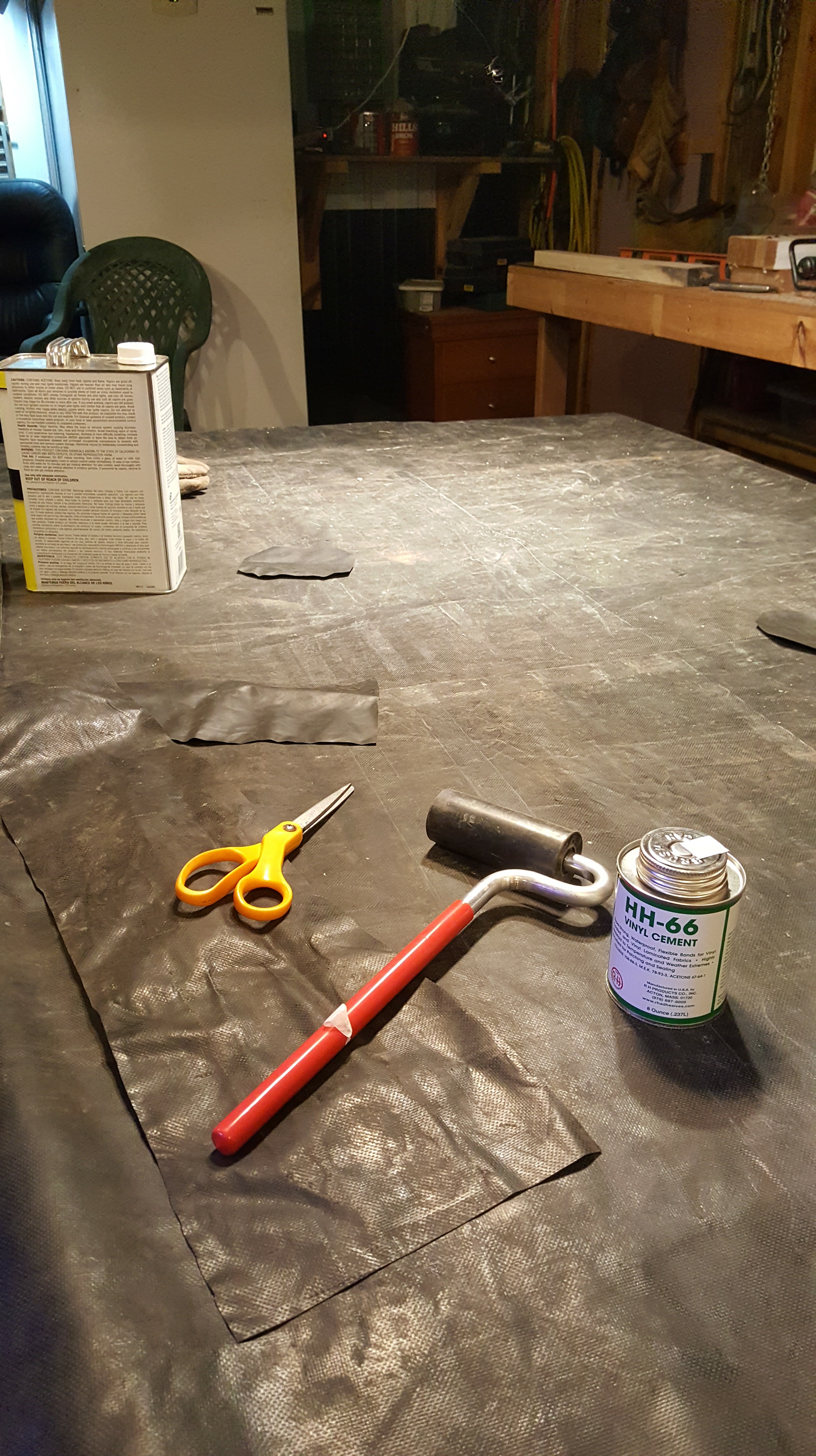 We used a part of the tarp that had been cut off for the patches and we patched it from underneath this time. It went like this…locate hole, clean with acetone, clean patch with acetone, paint patch with dangerous glue, apply patch, then roll patch. We were working on a sheet of plywood so after we got a 4 foot section done, we would have to muscle the thing over another 4 feet. Needing a break from the fumes now and again, I commissioned Kendra’s help on another task. Taking out a very long row of rusty screws. She started them from the inside to push them through the roof goo and I pulled them out from the top. Later, after Kendra went home, I worked on cleaning up the track. Someone along the way used silicone, which happens to be the ONE material eternabond won’t adhere to.

Kendra and I finished with all the patches and it was time to tuck Mander in again. So we hauled the tarp outside and it tried to eat Kendra for lunch.

After the tarp spit her out, we laid it out flat, rolled it up nicely, got the skid-steer to lift it up onto Mander and then tugged, pulled and rolled it back into place. Next trip, we will pull the peak out and lay the tarp flat. That way the weight of the snow will be evenly distributed and the new patches should keep any water from getting through. Phew! I really hope that’s the last time I have to mess with that thing before I leave. I doubt it, but I can hope. Thanks a million for making my life easier that day Kendra! You rock!

The next day was a cold and rainy day so we deemed it a supply run day. When you are in rural Wisconsin, it really is a supply run DAY. We headed off to Menards with our lists in hand but not without stopping for propane refills first! I plan on working through the winter so propane is mighty necessary. I’m actually quite impressed with how warm and efficient Mander’s furnace is! 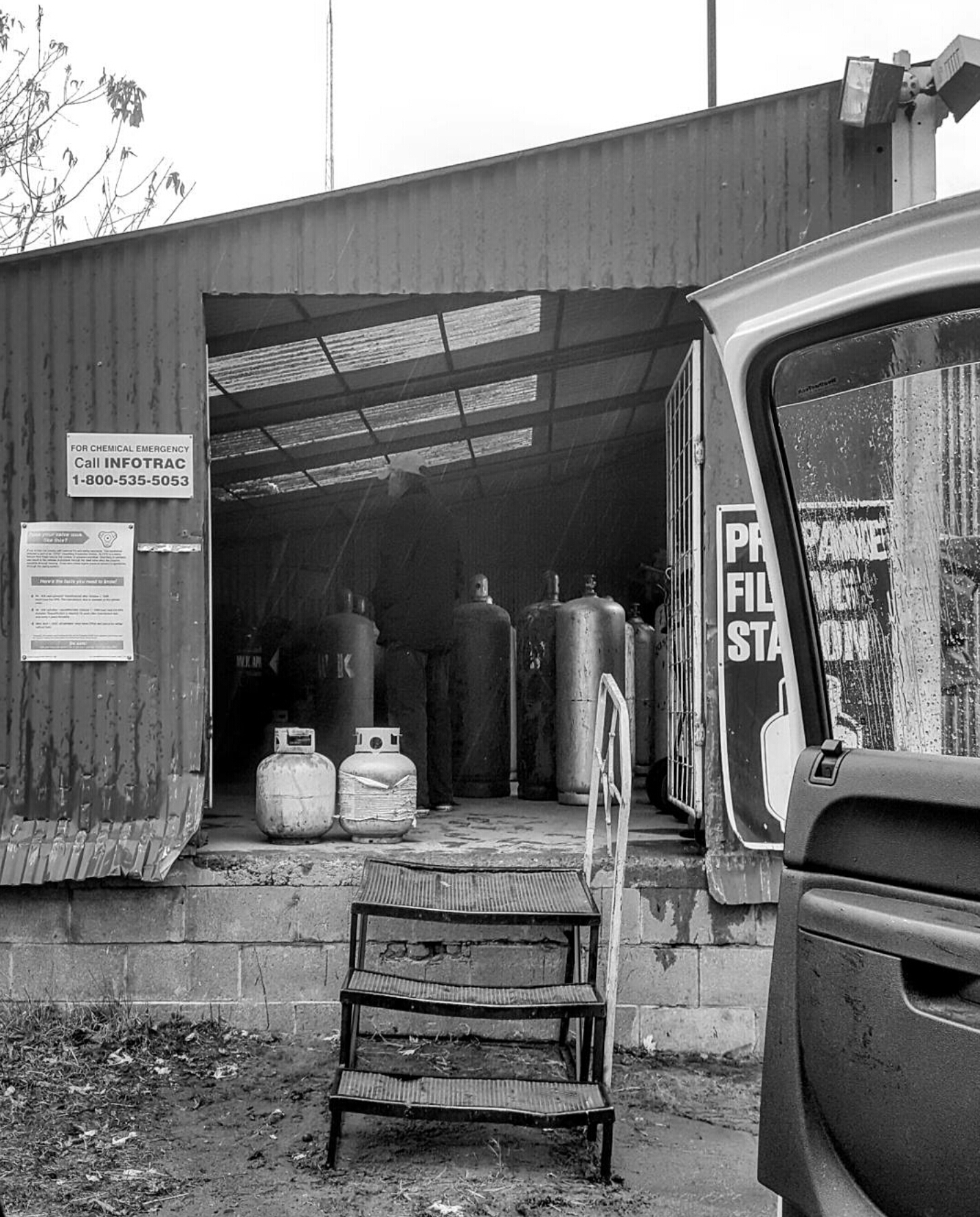 We got all the materials I will need to finish rebuilding the wall and the addition to the bathroom, plus lots of other smaller supplies. I got out of Menards only spending $127! We headed back to unload, ate a late lunch and then I had to return home. Next trip the plan is to build and install the wall. It needs to be around 40 degrees to use the glue so we are praying to the weather gods for warm-ish weather! If you’re tight with the weather gods, call in a favor for me, would ya? 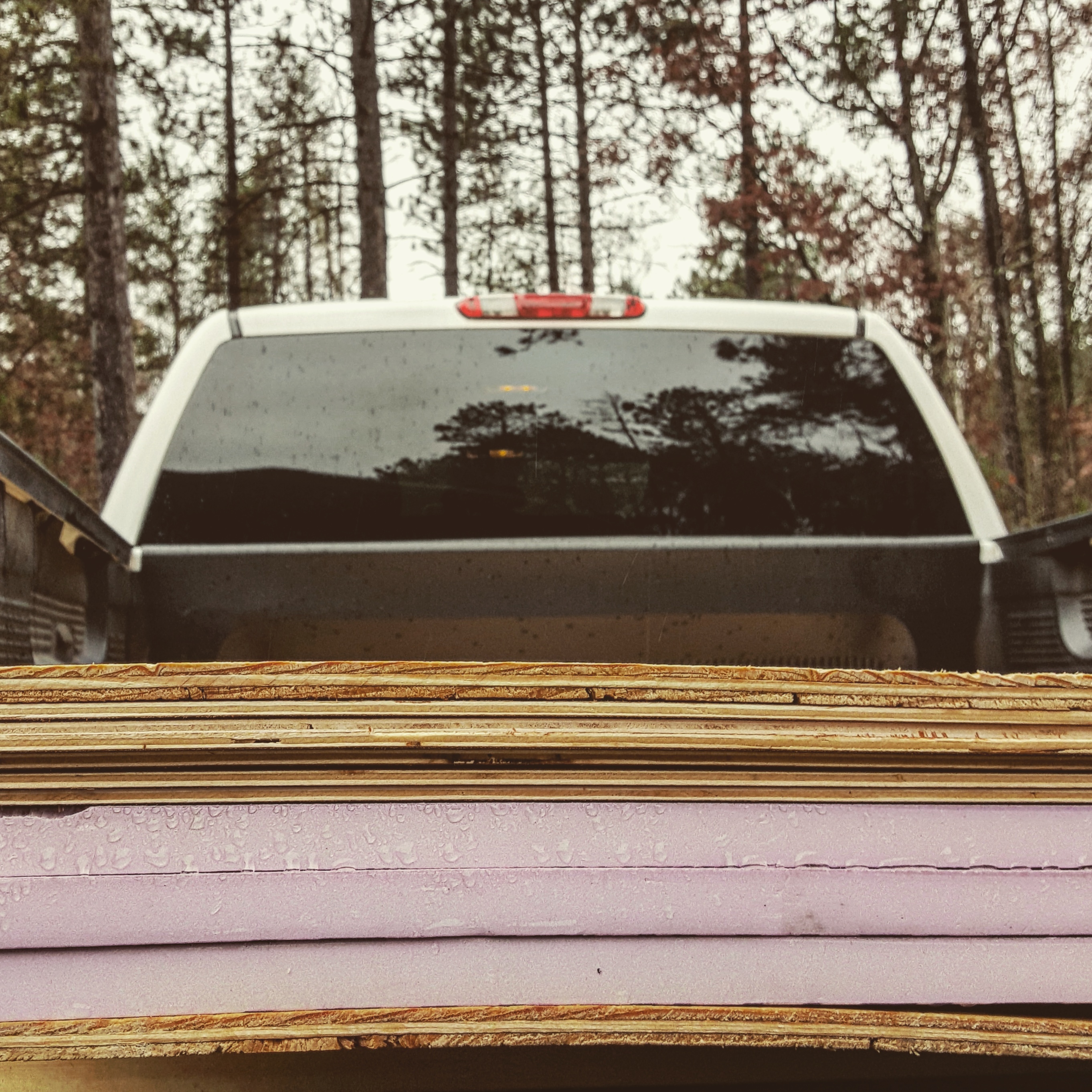 5 Comments on “Up, Down and Then Back Up Again”