Posted on January 31, 2017 by agirlandhercommander

I made it to Wisconsin and learned my Uncle Buster was in town! Buster is a truck driver and we rarely cross paths. He is usually out on the road when I am visiting, so I was excited to get a chance to see him and thank him in person for the tarp that has kept Mander dry. Although that tarp has been a pain in my ass, it has been vital to the Mander restoration and I’m super grateful to have been gifted it! After a quick visit, some words of encouragement from Buster, I made my way into Mander and started preparing her for the next few days of work.

First I’d like to share some pictures! I have been having a hard time taking photos of Mander on account of her being such a tight space. I keep backing up, hitting walls, standing on things and I still can’t get everything in. So I ordered a clip on wide angle lens for my phone and if you look past the fun house mirror effect, I think you can get a better idea of the layout! Here she is in all her busted up glory…

Now let’s get to the work I did! The first day, I made sure to get that last bit of spray foam in before I went to bed so the next day I could work without the foam pooping on me. Once it was done expanding, I cut the popcorn kernels off and got to work painting the finishing lauan pieces. I decided to paint the lauan before installation because it sure is painful to do EVERYTHING over your head. 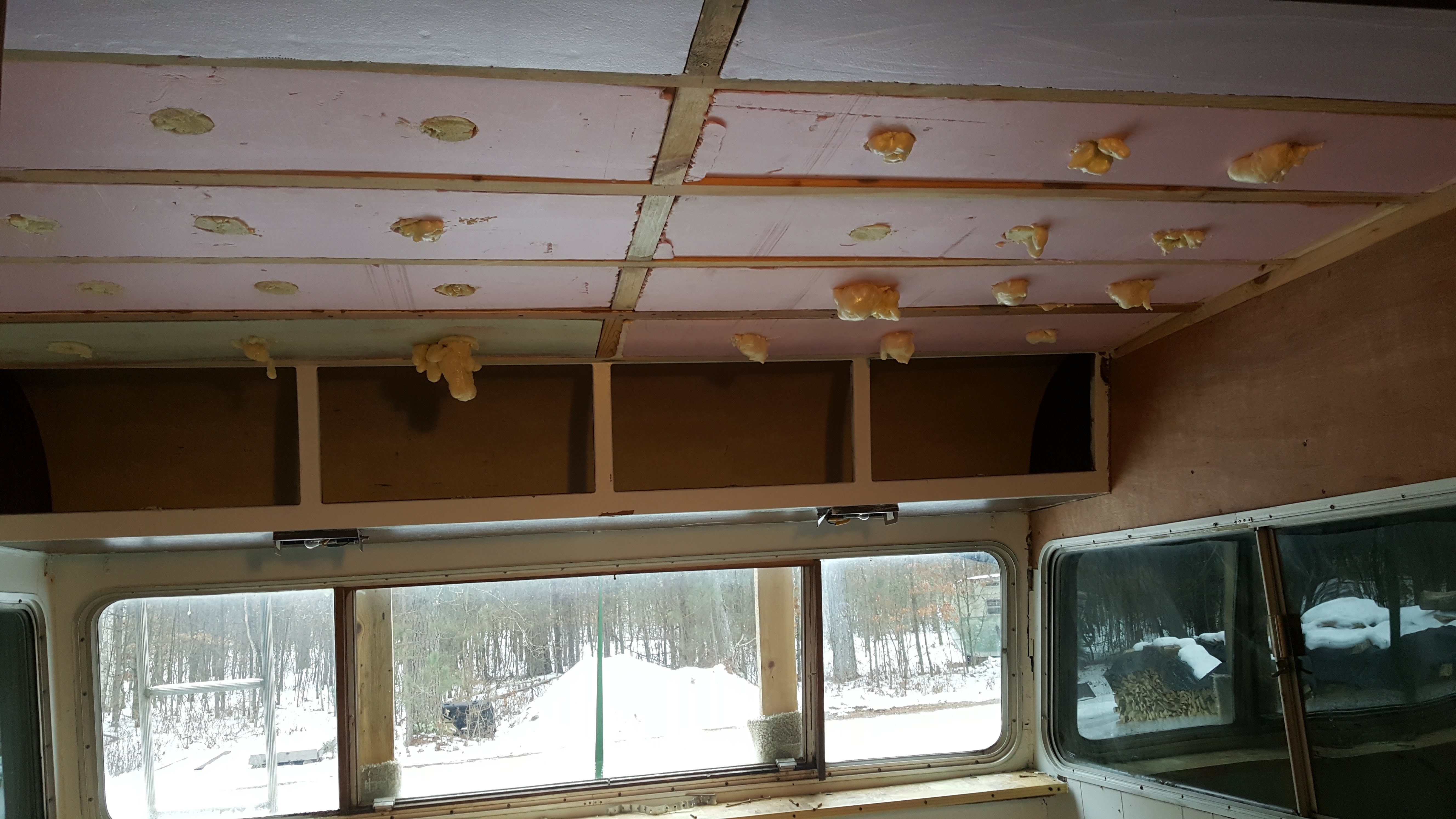 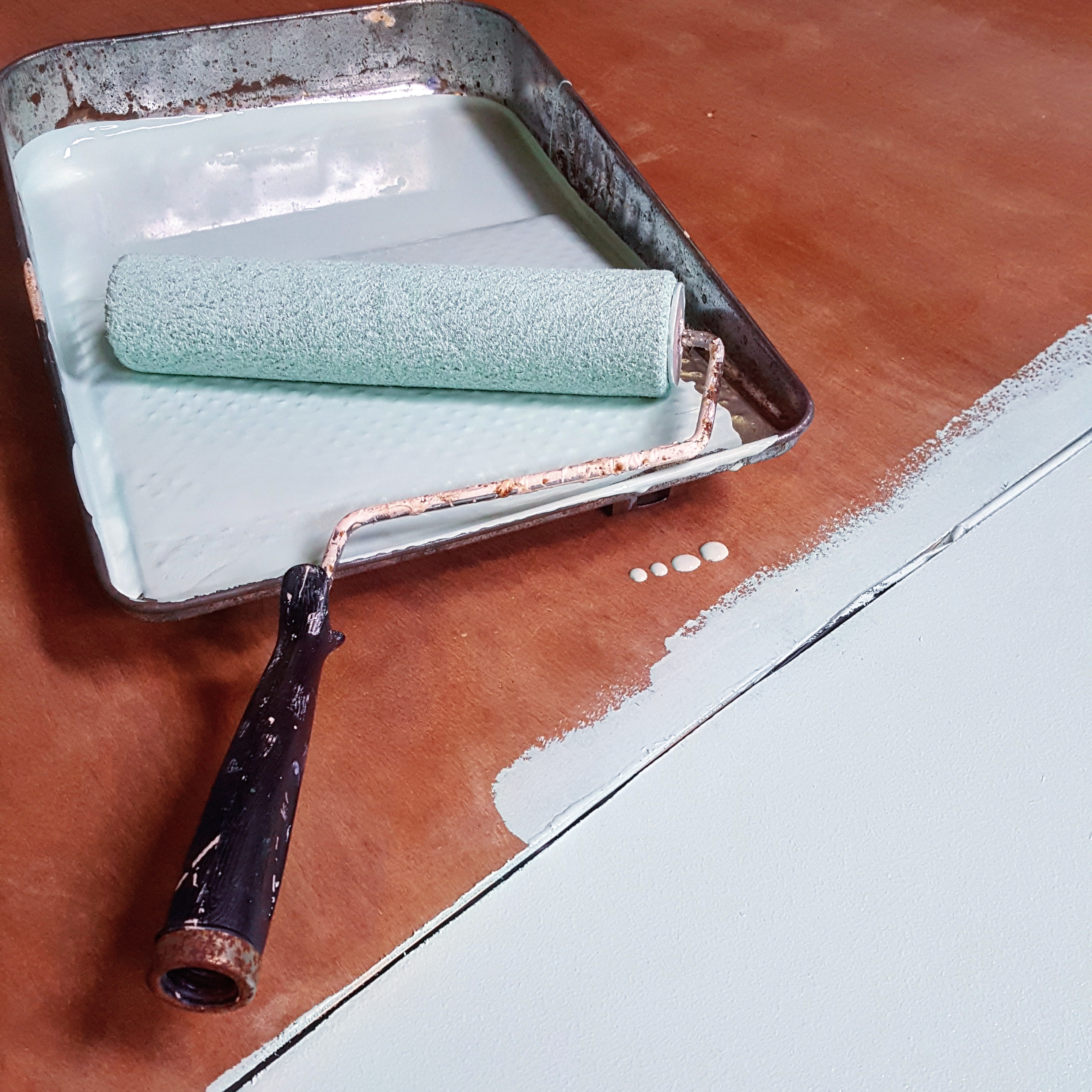 After I painted the lauan, I applied a ton of glue and  got the first half up! 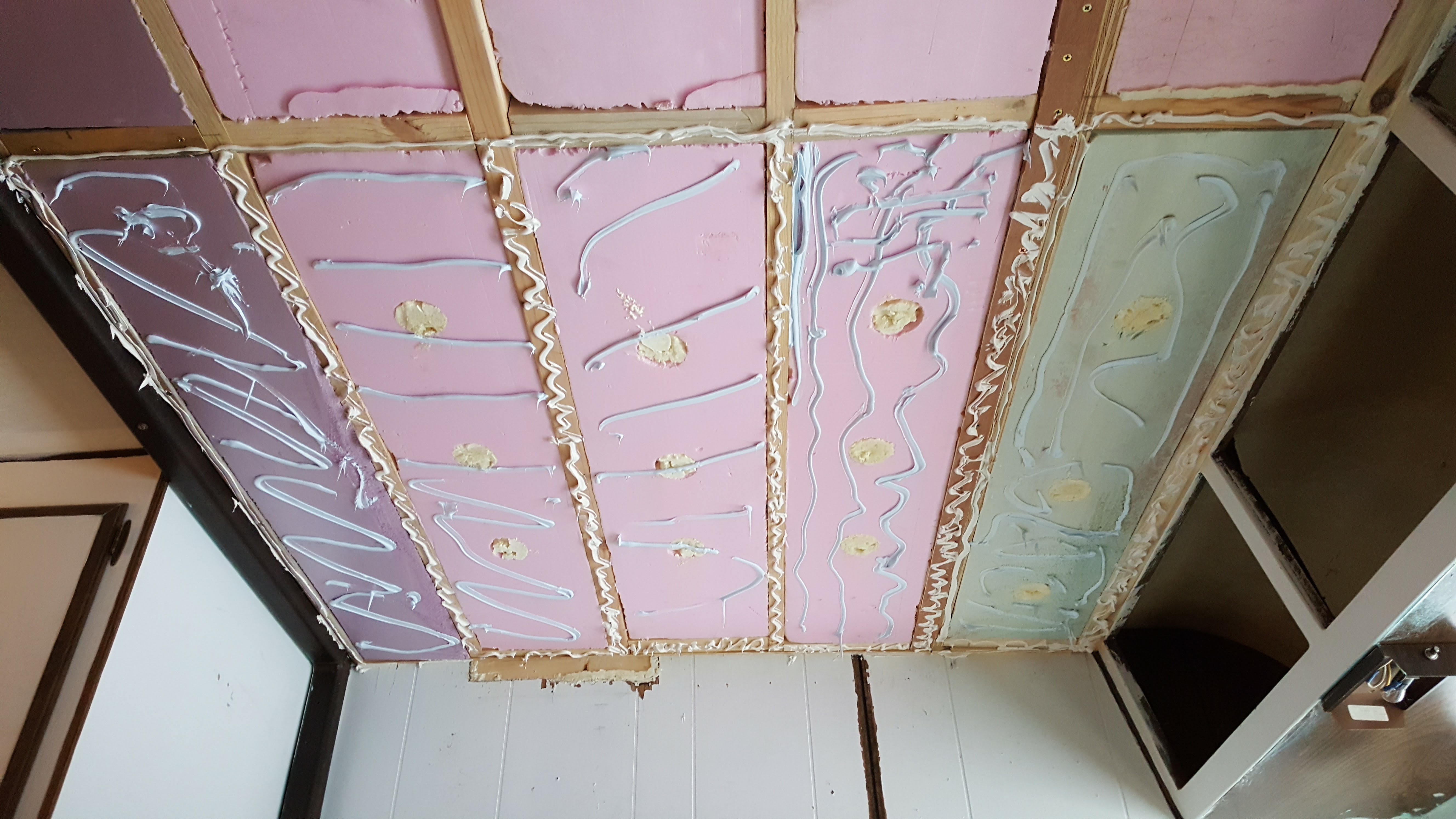 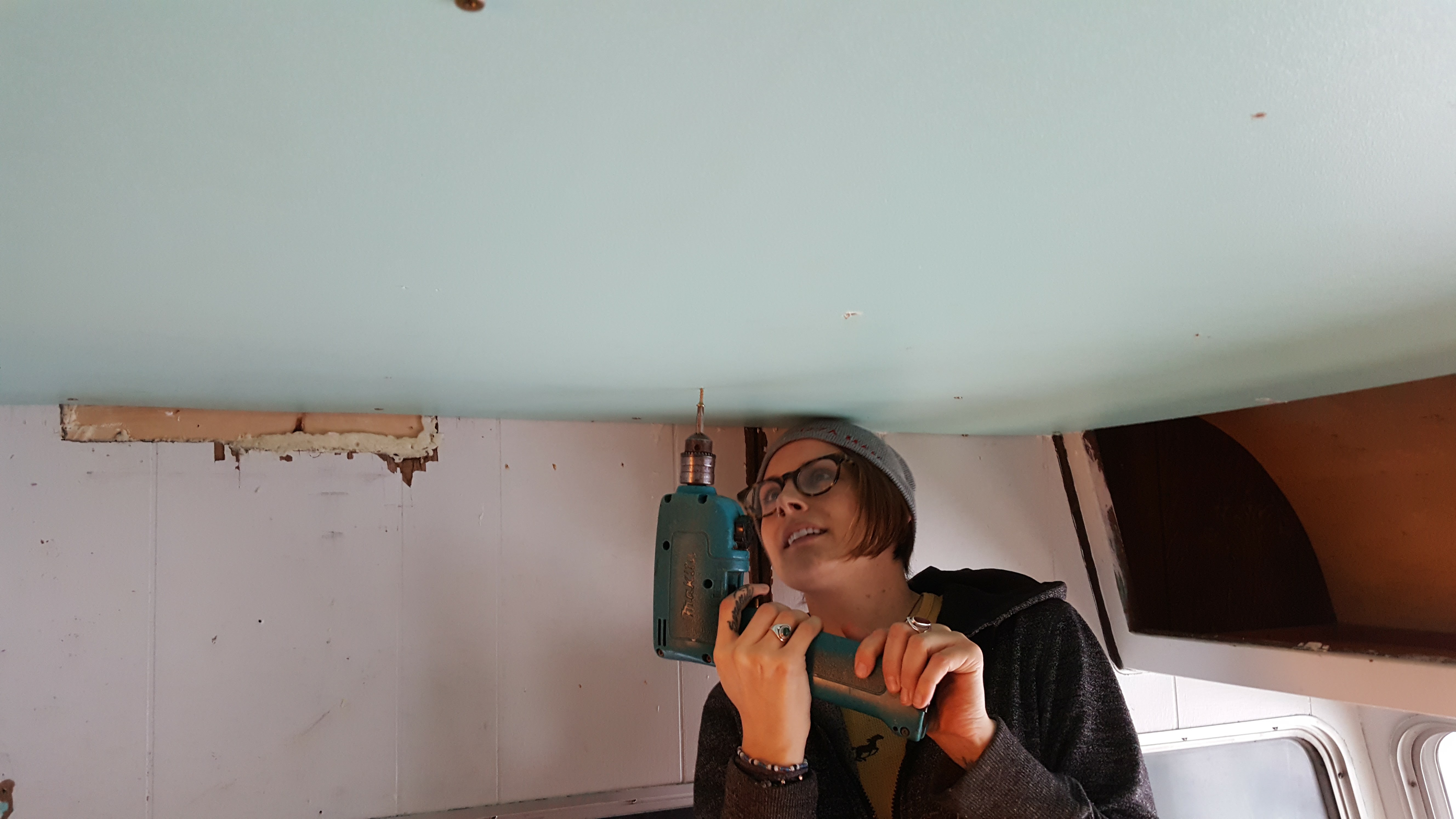 30 screws later, my neck and back were threatening to seize up and I really needed a break from looking up. I decided to start measuring and drawing out some blueprints now that I’m finally getting to the part where some creative construction can take place. I’m not quite finished making changes to the back bedroom area but since there is technically room for a king size bed (I’m only putting in a queen) I know I have extra space to play with. 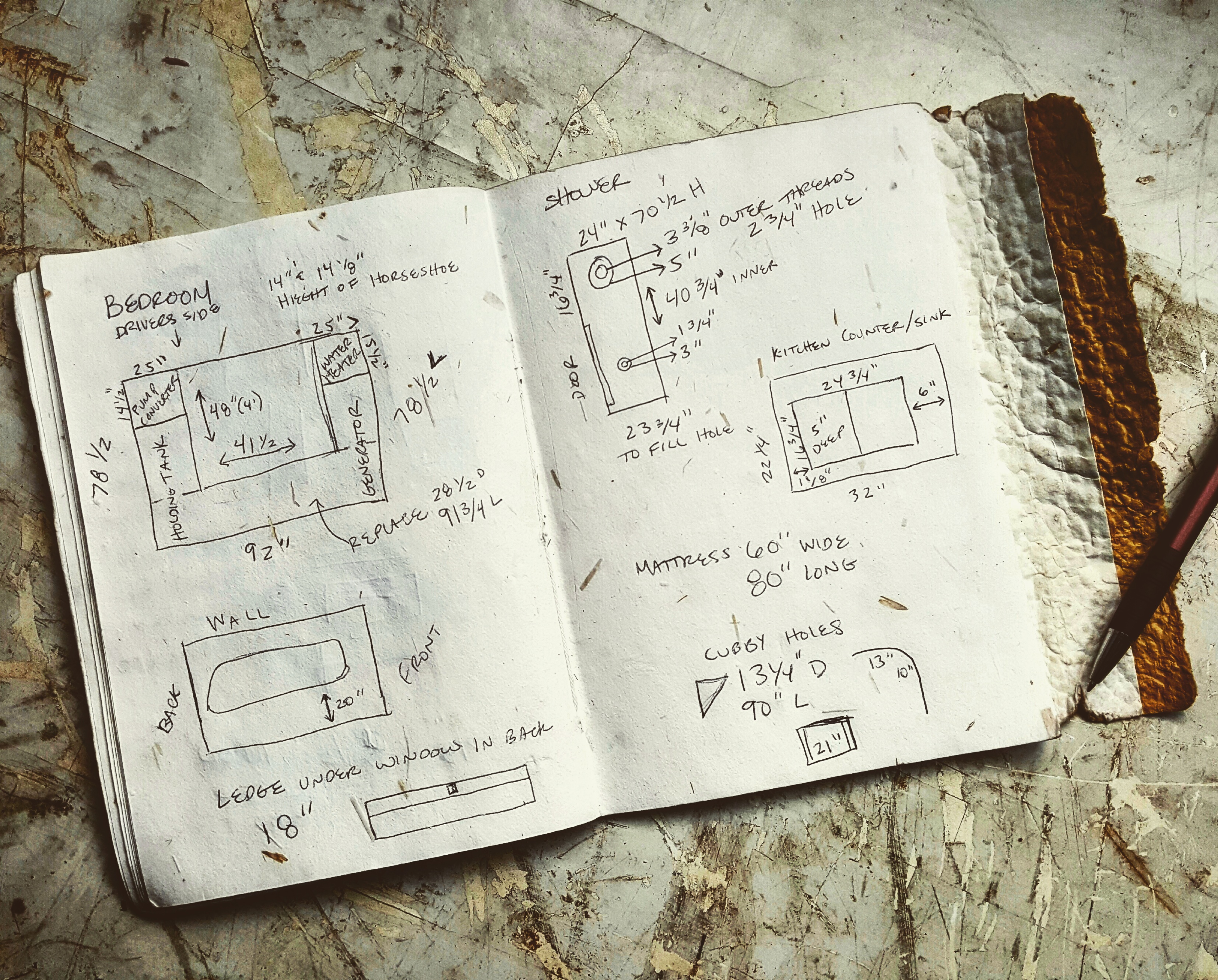 When I was ready to move on to the second half of my ceiling I realized I was out of glue. NOOOOOOO! Luckily, my Dad was going to take a trip into town the next day and offered to pick some up. What a relief! I was going to be so disappointed if I had to leave without finishing the dang ceiling. Again. I could sleep soundly knowing I would be able to move forward in the morning.

My cousin, Kendra, offered to help me the next day and I was happy to take her up on it! I wanted to install the awning I had replaced and it was definitely a 2 man job. During the rebuilding of Mander’s wall the awning had to come down. I took one look at the fabric and knew it would be pointless to reinstall it without replacing it. At least this was a take home project so I could take my time figuring it out. It took me a couple months but after buying UV weather resistant fabric, a rivet gun and some heavy duty sewing machine needles, I was able to make a new awning for under $30! I’m making it sound way easier than it was….and we haven’t even gotten to the installation part.

Here’s a glimpse at the ridiculousness it took to install it. What you’re not seeing is that it had already been completely installed and uninstalled again because it wasn’t right. Then there was the winding of the tension, which was scary and even downright painful at times. But HEY! Here it is finished! 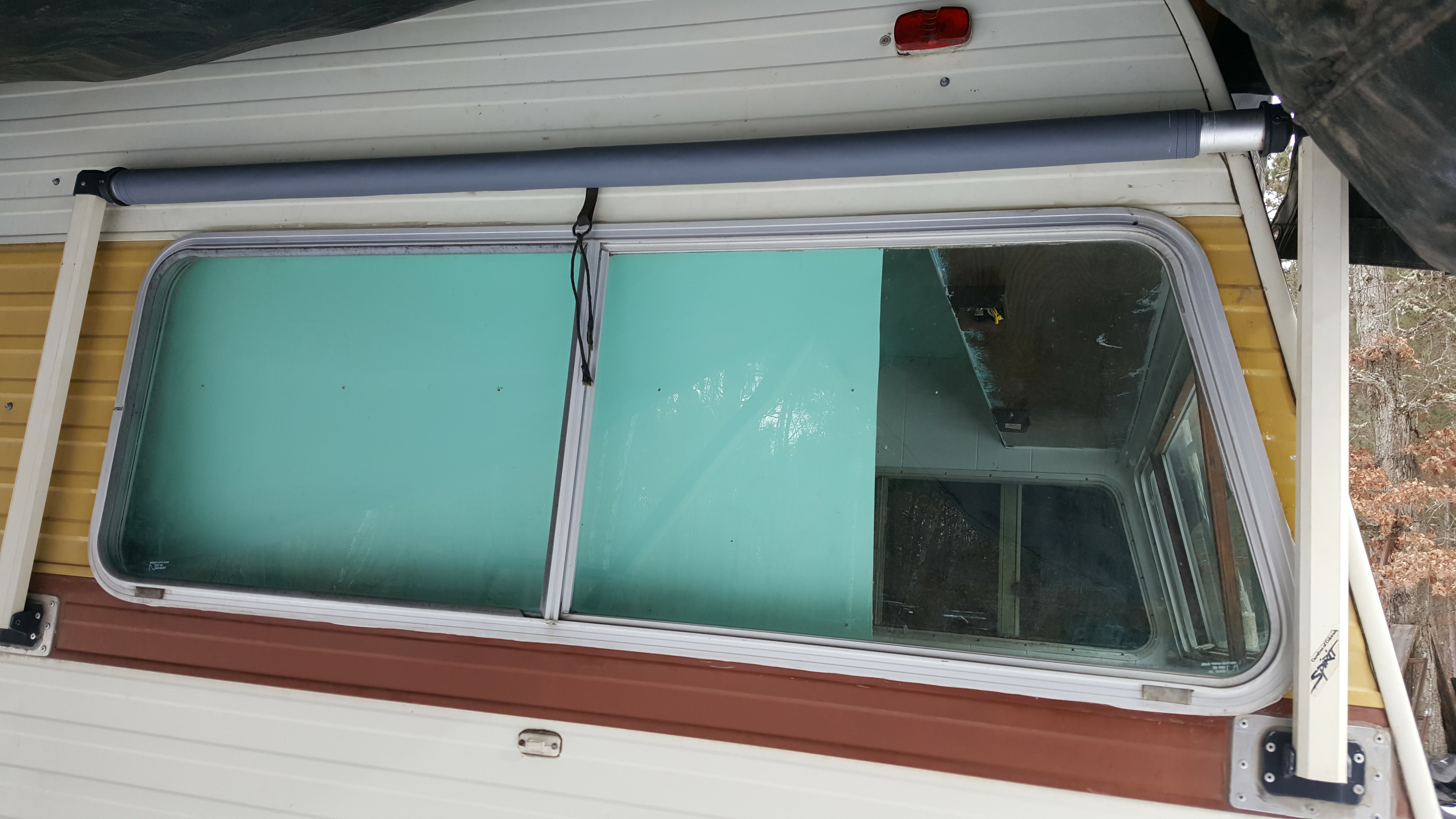 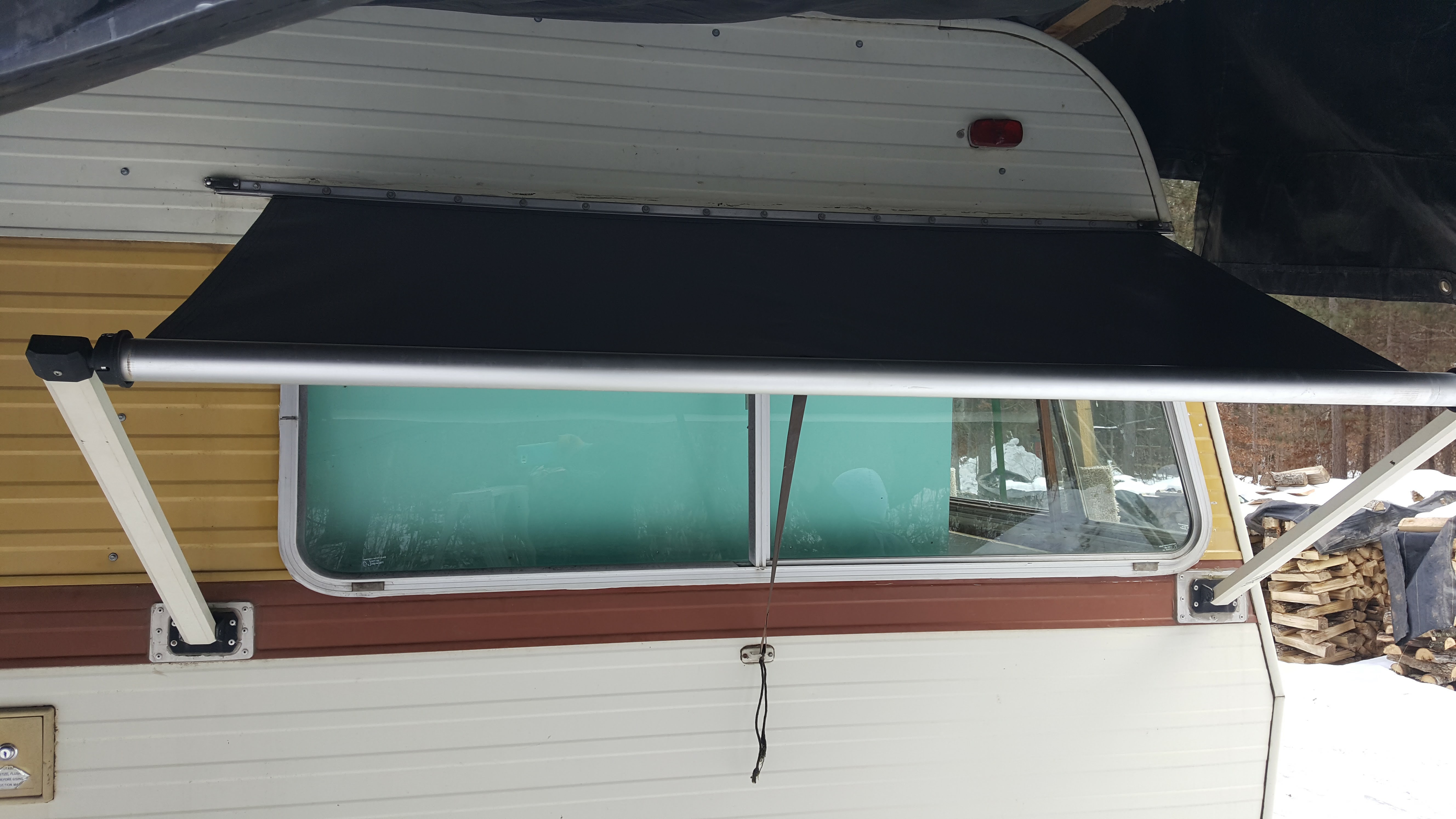 Thanks again for your help Kendra! It’s nice to laugh through something that could otherwise be extremely frustrating.

Since my Dad saved the day by getting more glue, I could move forward with the other half of my ceiling! This half sucked a little more than the first half. There’s this sneaky little thing that keeps happening whilst building Mander….something that is cut to fit, fits perfectly and when I get back to it, it’s the wrong damn size! So although last trip, both of the lauan pieces were cut for the ceiling and fit just how they should, this trip they did not. The last piece was too big and it took us about 5 trips back and forth from Mander to the garage to get it cut to size.

Then there was the excessive amount of glue to apply and another 30 screws to put in. My Dad is just the right height to hold the ceiling while I ran around screwing screws in. 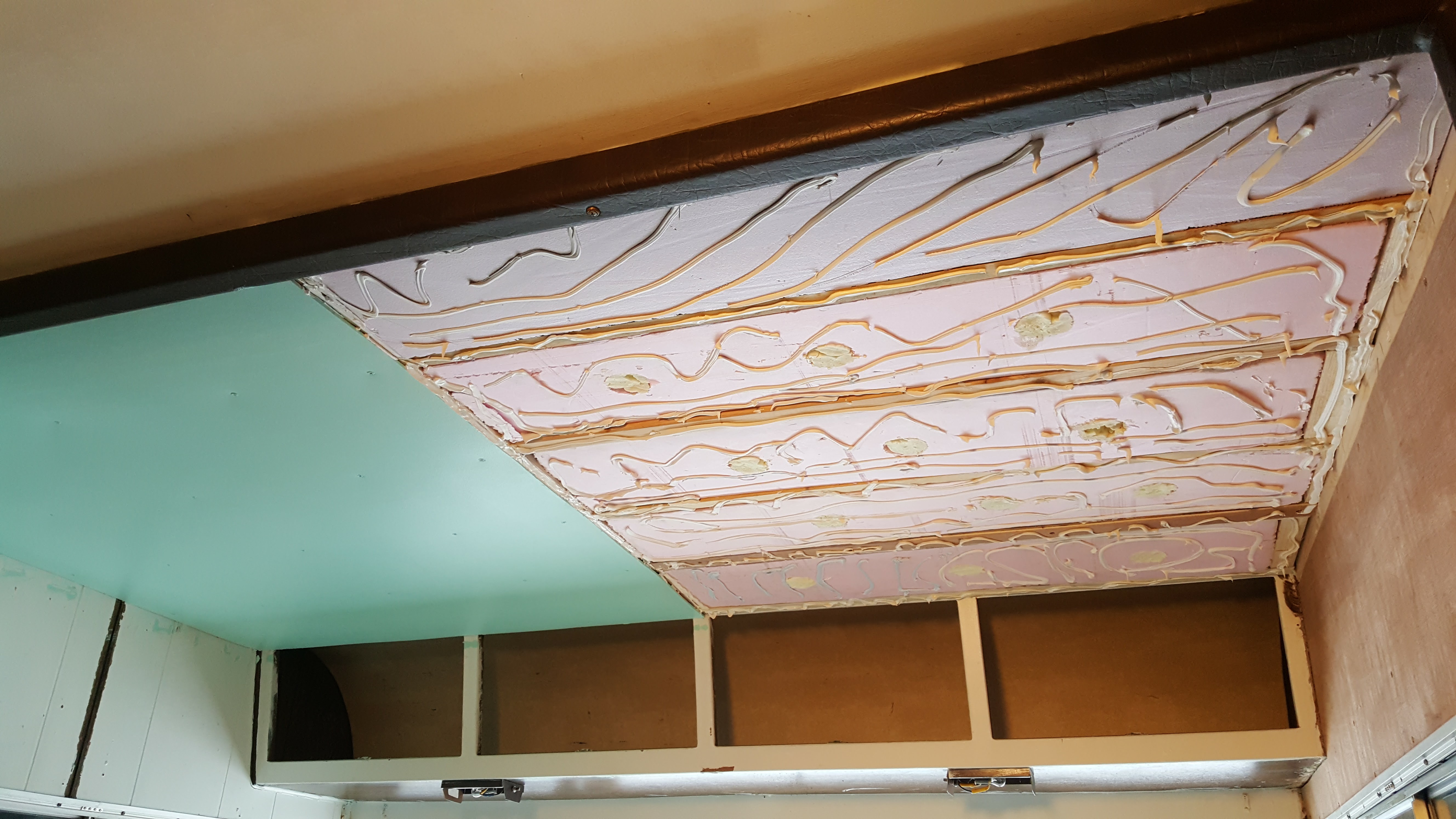 I got all the screws in and we decided to put a little trim piece to hide the seam which is a little off center. Because everything in Mander has to be a little wonky.

My neck and back were about shot again so I finished up the day by ripping out the ledge in the back. Both corners had suffered water damage so it wasn’t stable plus I have plans to build a wider ledge with some storage underneath. After ripping it out, I found a cozy little mouse bed. Sorry guys but you’re evicted! 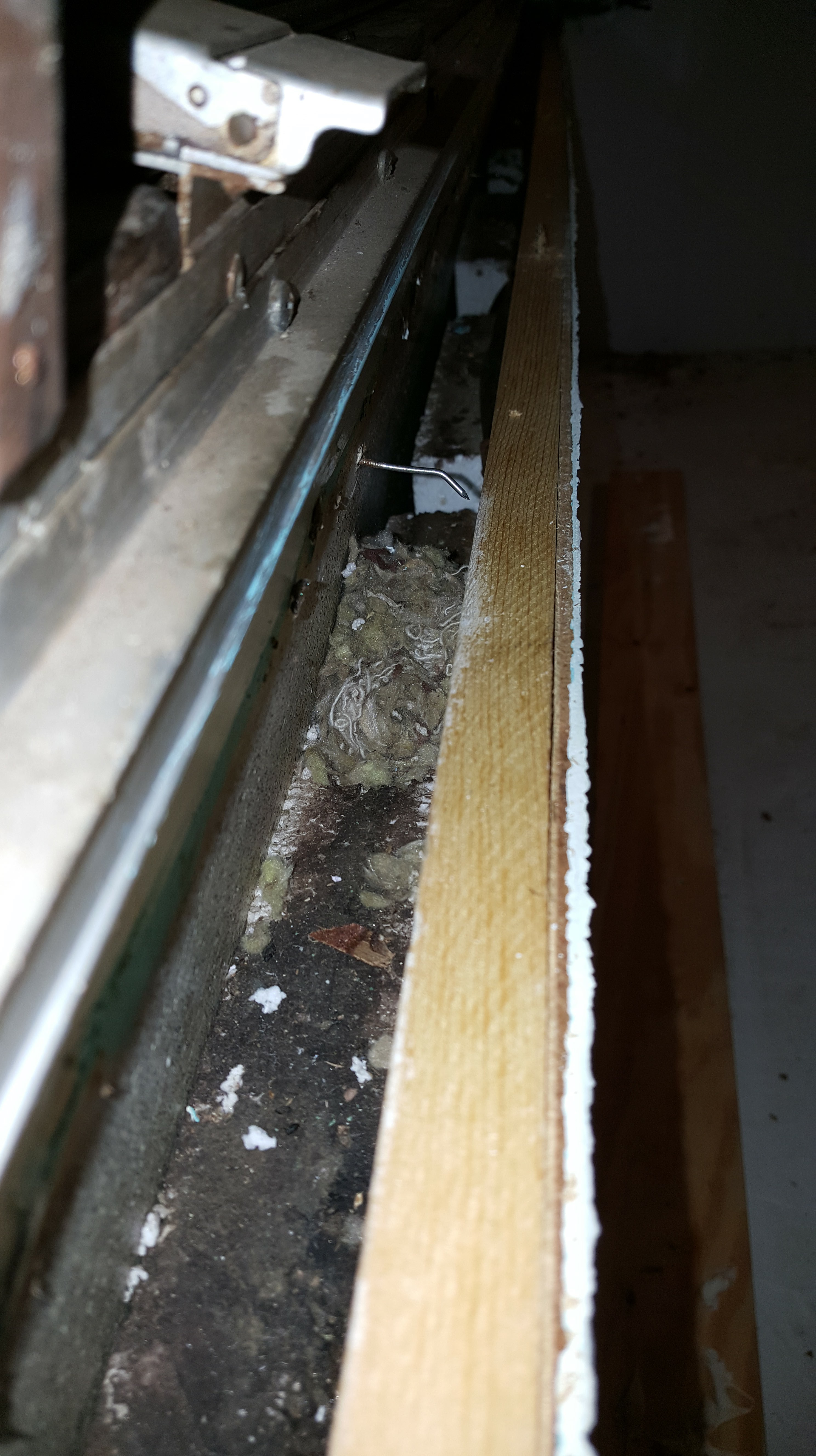 I cleaned everything up, including dremeling off all the nails and screws that were poking through because I’m the DREEEEMEEEL QUEEEEEN afterall.

The next day was my last. After painting the screw heads and trim piece, it was finished! You can’t tell by looking at it but there sure was a lot of work to get to this point. From tearing it down in July and finding a ton of trapped water, to removing an insane amount of rusty screws, to figuring out how to build it so it doesn’t leak again, to multiple people’s hands constructing its new form, to the layers of wood, lauan and styrofoam, it is now a super dry and strong ceiling sandwich. Uffda. I’m looking forward to some work that is face or feet level next trip.

4 Comments on “Over My Head”