Posted on April 6, 2017 by agirlandhercommander

The winter was rough. I ain’t gonna lie. I was walking on the edge of a nervous breakdown before this trip but once I got my hands on Mander again, I was feeling much better! Spring has sprung! Thank god.

I think it was a combination of going down to one trip a month over the winter, thus spending a lot of time not working on Mander with my deadline looming over me. Trying to get all my ducks in a row at my current home by going through all of my belongings (if I could just donate them and be done with it, I would but I’m counting on the money from them to help fund everything), listing and selling them. Getting closer to some VERY expensive purchases I need to make for Mander, trying to research and save up for those purchases. Plus regular old life on top of all that. Feeling the pressure of it all, I was waking up at 3 a.m. with my head swimming and spinning. Needless to say, I was chomping at the bit to get up to Wisconsin and get to work so I could feel just a little more in control.

Since the weather is getting warmer, I wanted to get Mander started and get her juices flowing. I have some serious electrical wonkiness going on which has destroyed my batteries. I’m plugged into my Dad’s 110v but because my converter is broken I have to have a trickle charger hooked up to my marine battery and because my battery selector switch is broken I have to run everything through both my starting and marine battery. Thus, ruining both batteries on account of them being drained and recharged countless times. Got that? Haha! Like I said, it’s wonky. I started off by replacing the battery selector switch so when I switched out batteries, I wouldn’t ruin them again. I got to work disconnecting everything so I wouldn’t light up like a Christmas tree. Safety first kids! Here’s what I was working with.

As you can see, things are pretty corroded and not so new looking. Inevitably, this happened.

I swapped out the selector switch for the new one and then scooted my butt off into town to get a couple new terminals. I was gonna need them if I wanted to finish the job!

The next day, I attached the new terminals and put in a new starting battery. I checked and rechecked to make sure I had everything the way it was when I started and then held my breath and turned the key. Mander started and nothing smelled like burning wires! The celebration didn’t last long because I soon discovered, things still weren’t right.  The furnace’s electrical start (I think?) started freaking out and I still couldn’t bypass my starting battery and run just on the marine. Ugh. I guess at the very least, I was able to warm up the engine, which eased my mind.

The rest of that day was mostly spent preparing for my friend, Eric, to come! Eric helped me back in October and I was super stoked to be receiving his help again. My Dad was gonna be gone the next day running errands so it worked out perfect that Eric was coming when he was. I did all the little piddly stuff that needed to be done like prepping the wall we were gonna work on and cutting these water lines from where the bathroom sink used to be. I really enjoyed using this tool for some reason!

I went over the plan and located all the supplies and tools with my Dad so I would be a competent foreman. Eric and I would not be slowed down by anything if I could help it! My Dad and I finished out the day by making some 2×2’s in preparation for building my bed platform. More on that later!

Eric arrived bright and early and we hashed out a game plan. I had one piece left of the wall that needed to be made. Missing this wall piece has stopped me from building the addition to my bathroom so I was more than ready to get it knocked out. First we built a brace to span the side of the wall that hadn’t been torn into. I guess I was so into building this piece I forgot to take pics. It had a lip to attach the new wall plug to, slipped behind the preexisting wall and connected from both inside and outside Mander. Then we built the wall plug. As you can safely assume, it couldn’t be done without a million trips to and from the garage…but we did it! With time to spare!

Plywood framed out with plywood

A bunch of screws…

Before Eric took off, he helped me with my polywall. Oh has this polywall been a pain in my ass! I jumped the gun and bought it way earlier than needed because it was on sale. I plan to use it to redo my bathroom walls but in the meantime, have been hauling it in and out of Mander. It’s supposed to be stored flat so it takes up a bunch of room and is super awkward to carry. Eric and I cut 2 out of the 3 pieces to size so now it’s smaller and easier to manage.

We tacked a couple pieces up and I got a glimpse at what it will look like. I think it will be a simple, yet impactful change.

With the sun setting, Eric called it a day. How lucky am I to have a friend drive up to rural Wisconsin to help me just for the day!? He is truly a special friend. Thanks a million Eric!

I was in for a treat the next day when I finally got to build something from scratch instead of working with the unevenness that is Mander! If I’m gonna be living in Mander, she’s gonna need to have a bed big enough for me and my cats. After all, we are master cuddlers and nappers. Since it will be resting on top of some areas that I will need to access from time to time, I decided to make a platform that will attach with hinges so it can be lifted.  Here’s what I built!

I built the first part of the frame and then my Dad and I brought it into Mander to make sure we could fit it through the door and rotate it into place. Then we brought it back out so I could continue building it. I added more structure to the frame, then 2 portions of plywood for the top, then skirting around 3 of the edges so the mattress doesn’t go sliding around everywhere, especially when I lift the platform. I have to say, that so far when I’ve completed a project, I’ve been flooded with feelings of disappointment. It’s very strange and never fails to surprise me. I must have some subconscious expectations of it looking 100% better and it just doesn’t. It mostly ends up looking like a polished turd. BUT building the bed platform gave me that “look what I did and doesn’t it look so good!?” feeling.  I guess one could say I am feeling something akin to pride. It also felt really rewarding to have moved onto something that was entirely my creation.  I can’t wait to do more creative work instead of rebuilding!

Here it is in place. I will have storage underneath and more than enough room for all the book reading and cat cuddles!

On my last day, I finished the last bit of demo where the bathroom vanity used to be and got to painting.

I gave everything else one last coat of paint and….there you have it! A bright, white, polished turd! 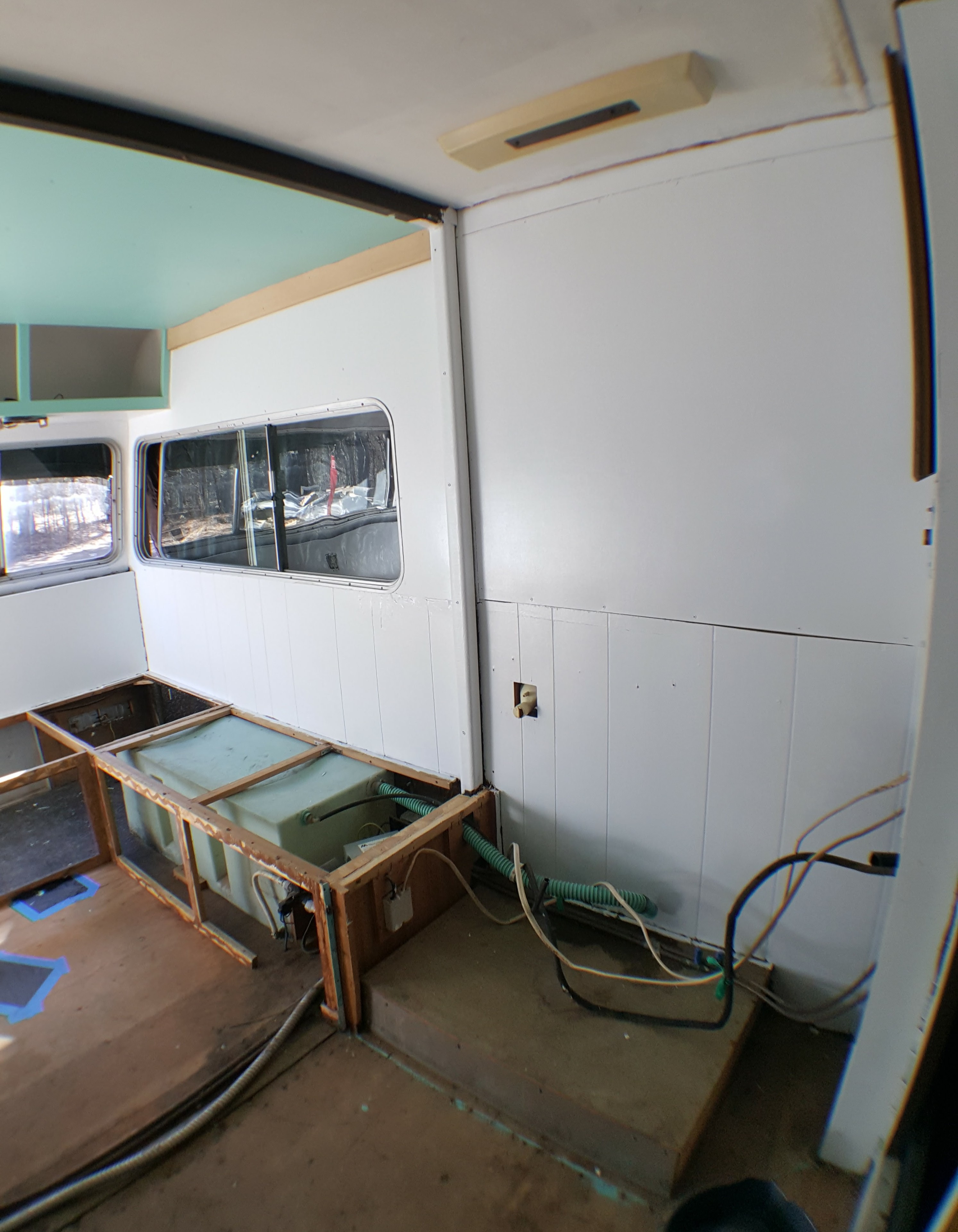 Don’t get me wrong. I am very happy to see the rebuilding part of Mander completed. Even though it didn’t produce a ton of joyous feelings, it means now I can move on to things that will! I came up with a plan for my dining room that I’m excited about and now I can start tackling that bathroom build. I have a wonderful friend that has offered me a spot in her driveway to work on Mander that’s only 40 mins away instead of the 2 1/2 hours away it is now. There are a few things I HAVE to do before I can move her, so I’m going to concentrate my efforts on those things first. Hopefully by the end of spring ,I will be bringing her closer to me and then I’ll really be able to make some progress!

If you’re on Instagram and love clean products for FREE, head on over to my account and enter my giveaway! It ends on Friday!