Posted on May 5, 2017 by agirlandhercommander 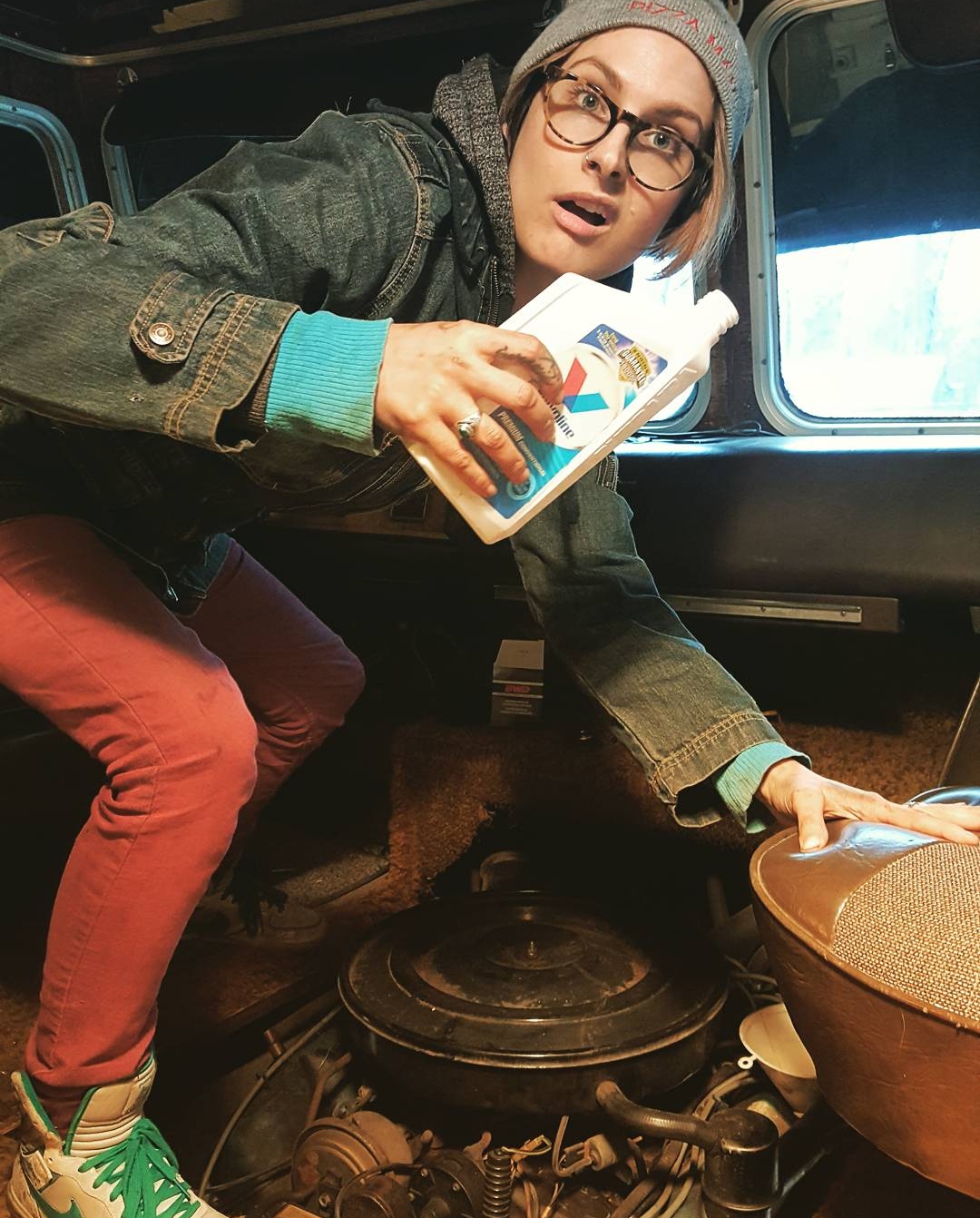 “You can’t see it.” “You gotta know it.” “You can’t do without it.” “You don’t wanna lose it.” “You can’t hold it but you know it’s there. Here, there and everywhere.” All true Marcia Griffiths. That jam was playing in my head last week while my Uncle Buster and I tried to get a handle on Mander’s electrical situation. “She sure got the boogie!”

I spent the first few days doing a lot of small things. I replaced all the light fixtures with ones that can use LED bulbs which will save me energy when I’m running off solar. Plus they look nicer.

I swapped out batteries (again), did an oil change, caulked some seams on the inside, got the generator’s wires out of the way and ready to be removed, prepped the bathroom walls for paint, tried and failed to replace the vacuum advance, found some damage in the front of Mander that I hadn’t realized was quite so bad, freaked out a lot and avoided falling apart at least 6 times.

Needless to say, I couldn’t wait for my Uncle Buster to get there so I would have someone to laugh with! I had replaced the battery selector switch and installed fresh batteries with new terminals which sorted out a few of the electrical mysteries but it was still plenty confusing. One thing we knew for sure was that I had a broken converter. With my brain feeling pretty inundated with things to research and learn about, I was happy to surrender control on the subject and let Buster take the lead on the converter. He did the research and decided on a WFCO Converter Charger and what a beaut it is! This thing is gonna make it way easier to sort out problems and be much safer overall. I now have individual fuses for each component and every wire will have its own little home instead of being bundled together in one dangerous wad.

Since Buster spends most of his time on the road driving truck we haven’t been able to work on Mander together until this trip. He doesn’t get a ton of time off to spend at home with his family, so I was very grateful for any amount of time he was willing to give me. We were both excited and got straight to work! Here he is hooking up the new converter! 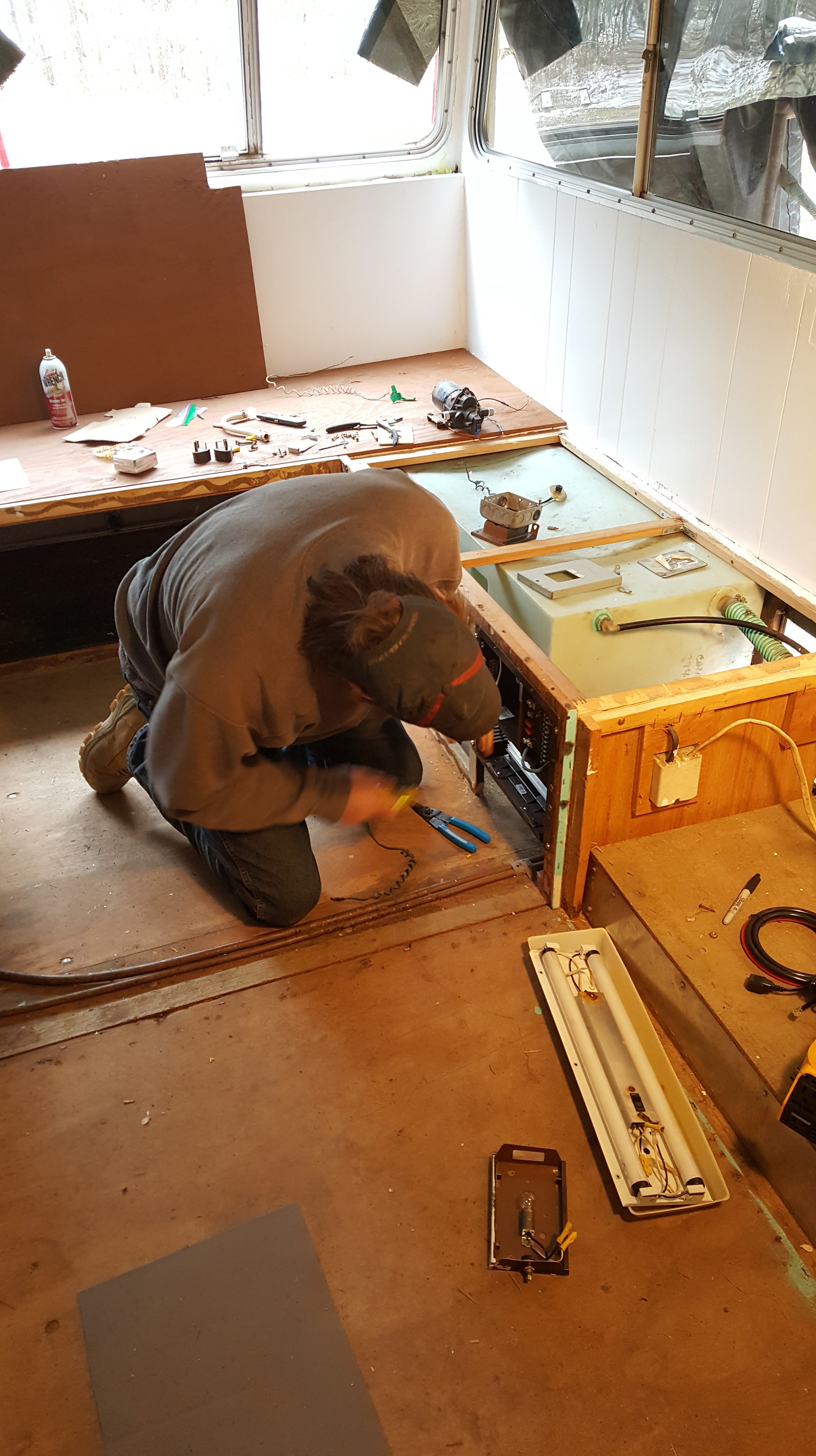 It’s silly, but my favorite thing we did was reroute the power to my fridge. This fridge is a newer appliance and Mander was not set up to have a DC hookup for it. Whomever installed it decided to just run a cord with two stripped wires attached directly to the battery. It was a pretty hokey job and certainly wasn’t protecting the $1,000 fridge. We ran the cord the other direction under the closet and now it’s hooked up to its very own fuse to blow, if need be.

While Buster was busy sorting out one clump of wires, I spent some time poking around this nest under my dash. I can’t even.

The time flew by and before we knew it, he had to head home. After he left, I built a shelf for my water pump to sit on and called it a day.

Buster has really been a ray of light during this little project of mine. Right off the bat he got me a heavy duty tarp used for semi loads so I could cover Mander up and dry her out. Since then, we’ve spent a lot of time on the phone problem solving and discussing ideas. And when we’re not chatting it up on the phone, he has been texting me words of encouragement and applauding my efforts. I can’t thank him enough!

We were so absorbed in getting things done and having a good time, taking pictures fell to the wayside. I didn’t get the honorary photo in front of Mander with him but here he is in front of his home on wheels! 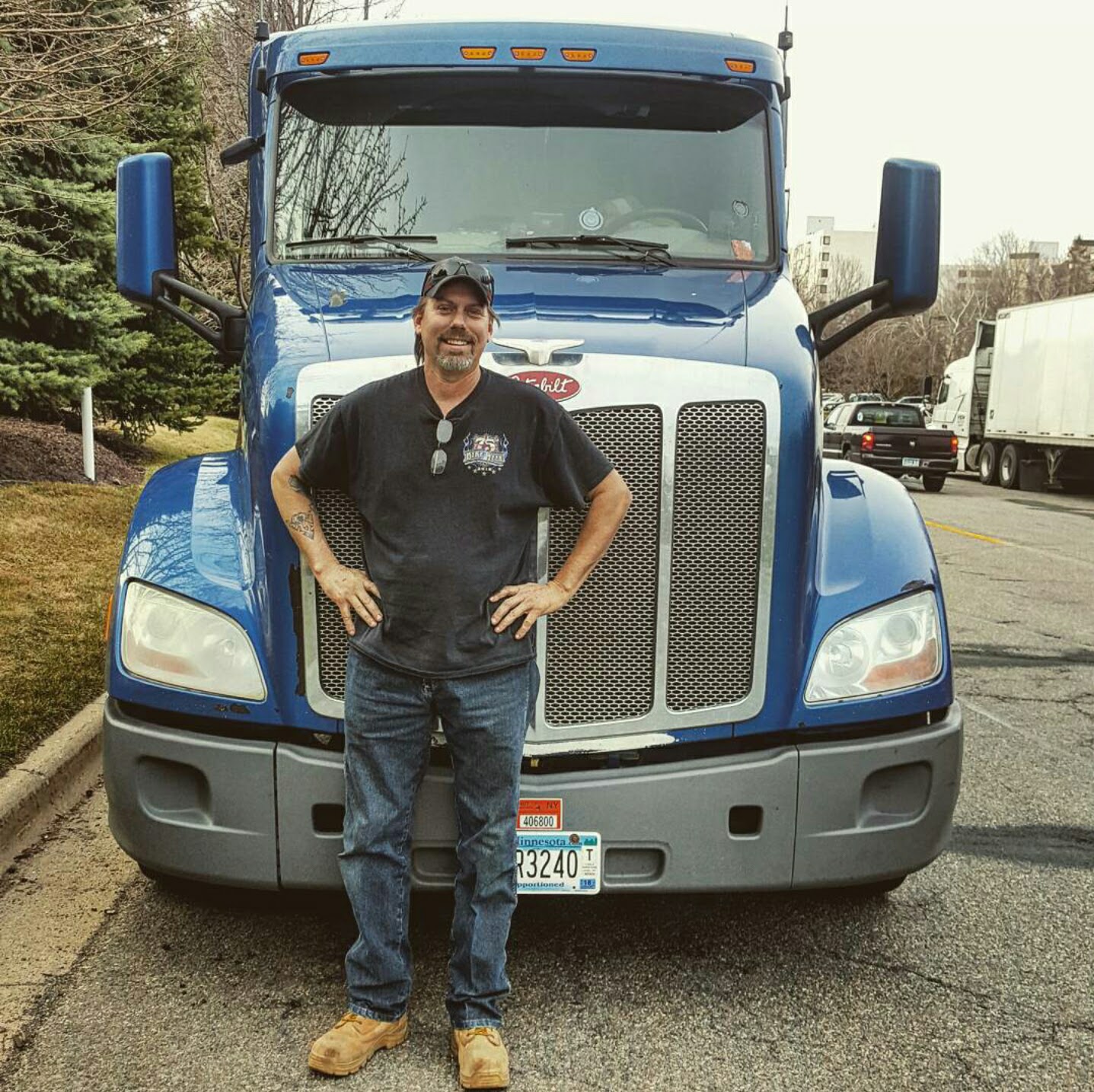 We didn’t finish figuring out the electrical this time but that just means I get to be graced with this man’s presence again. Lucky me! In the meantime, I must start watching some YouTube vids on how to use a multi-meter because we both took one look at that thing and swore it was in Chinese.