Posted on May 31, 2017 by agirlandhercommander 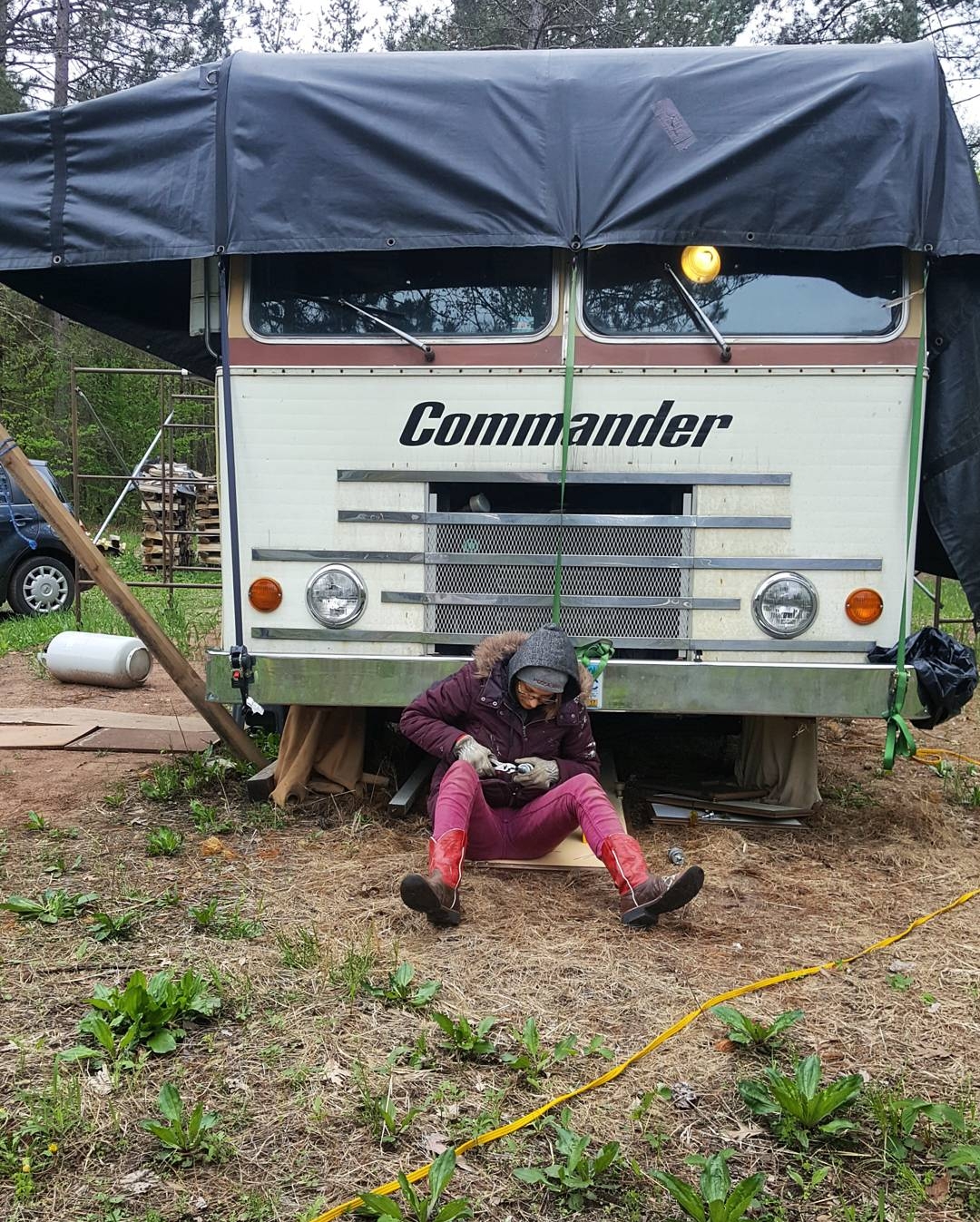 The last two trips I took to work on Mander were working towards one goal…moving Mander closer to the cities!

My friend, Kim, has been building a tiny home and we have bonded over our similar experiences. She offered to share her driveway and tools with me and I have been chomping at the bit to get Mander to her place ever since. I have so much to do and having Mander 2 1/2 hours away has made it really hard to show progress. But first, there were quite a few things I wanted to knock out before I left my Dad’s and some mechanical things I needed to get done before the drive to Kim’s.

I had taken out the window when I rebuilt the wall and replaced the butyl. The window had a pretty deep trim so I thought, “Hey I should put two layers of this new butyl and then the seal will be extra super duper good.” Bad choice. It was so dang thick the screws wouldn’t reach. Instead of uninstalling it I just waited until the weather warmed up and SQUUUEEEEZED it with clamps until I got all the screws in and tightened. It was a huge pain in the ass but maybe the seal IS extra super duper good now!? 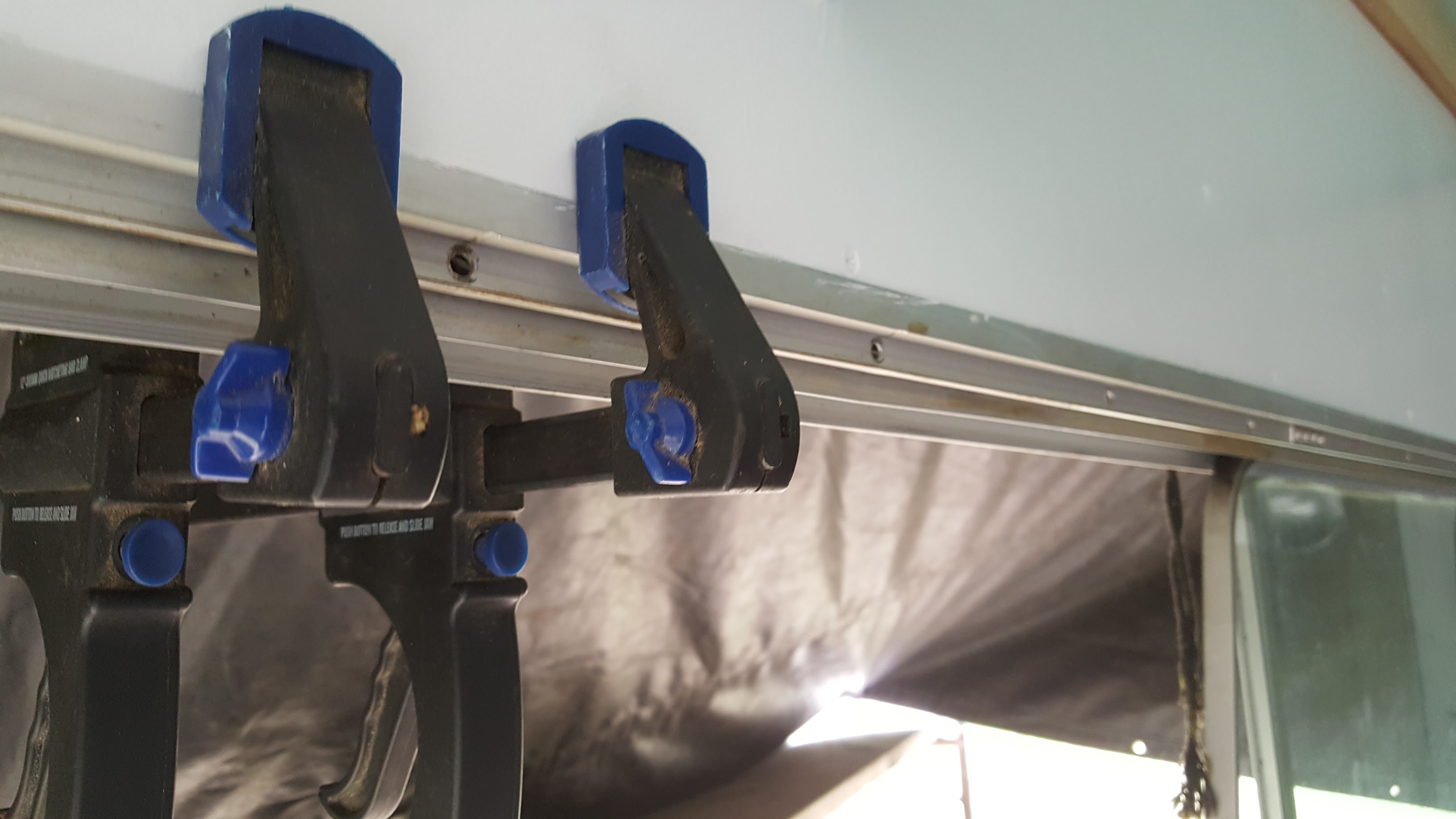 After the frustration of trying to force two things together that didn’t wanna be together, I needed to smash things. Demoing is always a satisfying task. You get to see results pretty quickly and you don’t have to use too much brain juice. Mostly brawn. So I went to town ripping up the dining area.

Since I won’t need the extra bed option I will be changing the layout into something that makes better use of the space.

The next day I had plans to change the air filter, distributor cap and rotor and fuel filters (all 3!?), which I did. But I also did this…

So I had to add “replace fuel line” to that list and bend it to match the old one. The old one had 90 degree angles like nobodies business so I splurged on a copper line because, gosh darnnit, I’m worth it. Once I got all that nonsense handled I was excited to start Mander and hear how good she was going to run! I hopped in the drivers seat, turned the key and…..nothing. After trouble shooting a million things I had a sneaky suspicion it was this octopus thing.

I was feeling defeated so I moved on to another project I wanted to do before I left my Dad’s. Get that ancient generator out! In order to do that I had to remove the rusted out exhaust. After some poking around it was apparent the exhaust was going to need to be cut off. I got a very rusty U-bolt off so nothing would stop it from lifting out once the exhaust was removed. It was time to head home and I left not knowing if I was going to get Mander started in time to move her next trip. I was a little worried but then my Uncle Buster came to the rescue!

The next week I was nestled comfortably in bed while Buster worked on Mander. I felt kind of guilty not being there but when someone offers to help, I take that help whenever it’s available. He decided that, in fact, it was the octopus thing that was bad and replaced it! I guess it’s a solenoid and inside is a relay switch for my starter. I think that’s right. Regardless, it was a $20 part and BOOM Mander was running! He also finished wiring up the converter and used his sawzall to hack off the exhaust on the generator so my Dad could lift it out with the skidsteer. With those things finished, I was ready to bring up my roofing crew and seal the roof. Sealing the roof was the last thing on the list before the Great Mander Move. And let me tell you, that move did not happen without a fair amount of drama. When I get done crying and laughing and processing all the feelings from that experience, I’ll write about it…stay tuned!