Posted on June 3, 2017 by agirlandhercommander 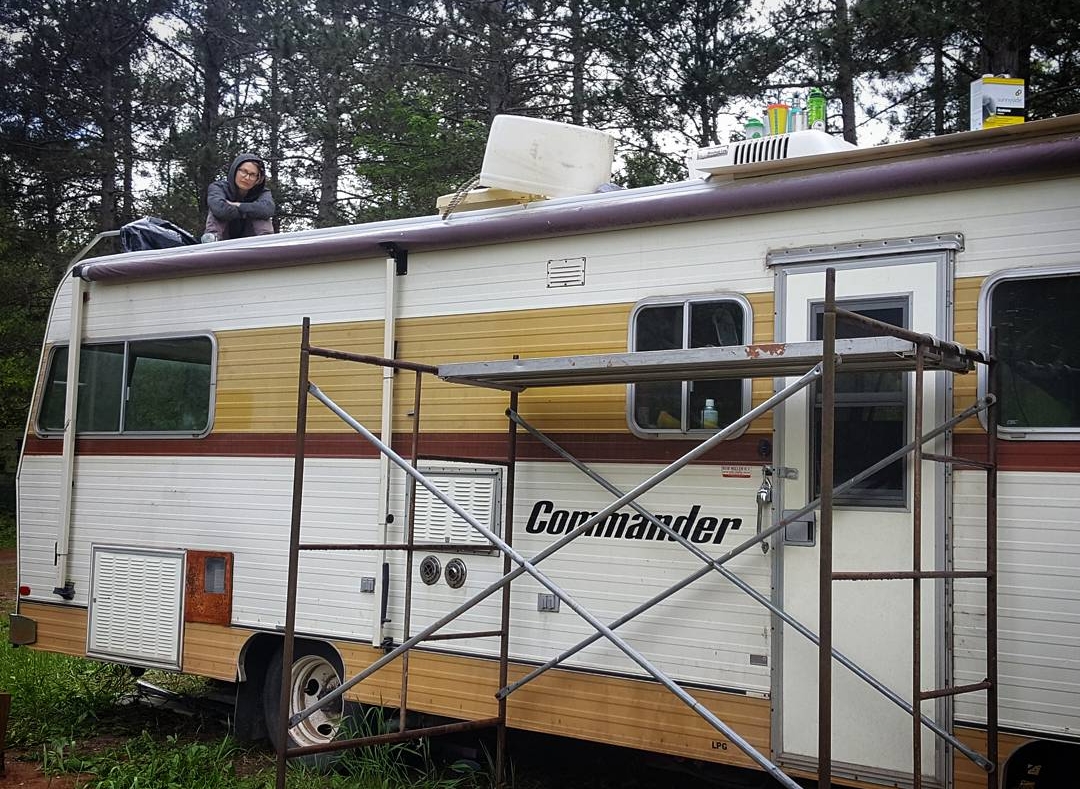 3 days. That’s how long it takes me to go from “I’ve made a horrible mistake. Eff this. I’m gonna set it on fire and walk away.” to “Hey Kim! I’m coming over to work on Mander!” It took some tears and a lot of rest but I’m back in the game!

This last trip was all about the roof. I HAD to get it sealed before moving Mander because I didn’t want to move the 100 lb tarp with me. I knew this was a project that would take me a million years if I didn’t ask for help so I reached out to some people and ended up with a legit group of workers! My bro in law, Paul, my bestie, Jamie, my cousin Becca and her fiance, Andy. I used all my good weather juju and manifested a pretty decent forecast so we were all set to kick some Mander butt!

We arrived Saturday and got straight to work. We were focused on getting all the seams scraped and sealed with Eternabond. If we accomplished that much, Mander SHOULD be watertight. Eternabond can adhere to anything except silicone and of course, people had used silicone on Mander in some places.

Despite encountering silicone here and there, which is by far the worst to try to get off, we made good progress the first day! We got about half the seams scraped and sealed which was pretty impressive for not even a full days work. Andy was the king at getting big pieces off which I’m sure sped the process up. 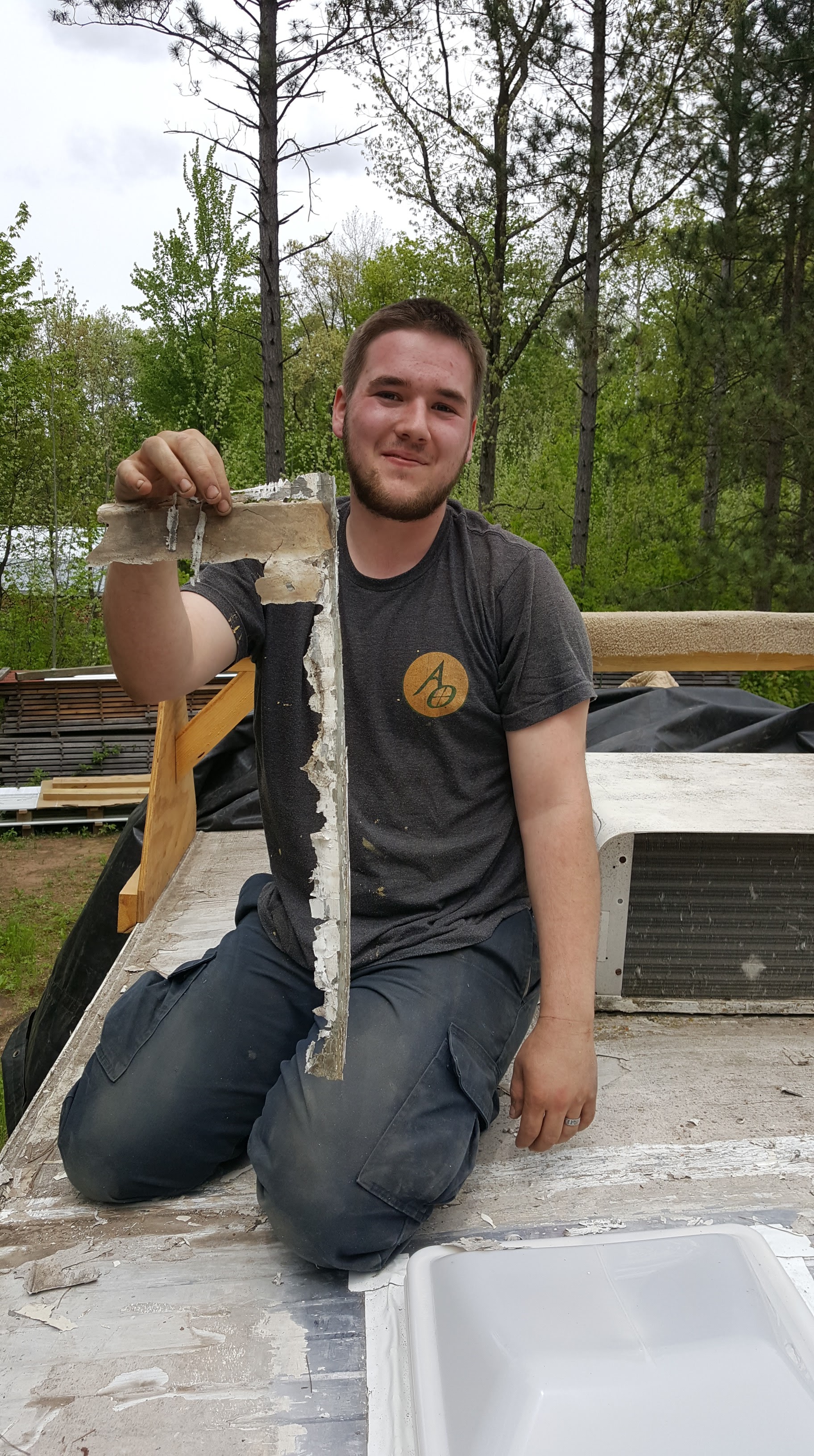 The next day Becca and Andy couldn’t join us so it was just Jamie, Paul and I. We were up with the sun and climbing our sore bodies to the top of that scaffolding. By now we had developed some techniques that seemed to work best. Paul handled the wire brush on a drill and Jamie was all about the full body scrape.

I was doing a mixture of caulking, scraping and taping. Around 3:00 Paul had to bid us adieu and it was down to two! I not sure you are aware but when you go after something for a long time that takes an immense amount of physical energy and mental focus, you start losing it. Our hands were wrecked and our fine motor skills had dwindled. Talking became a challenge and out came words that didn’t make any sense. Basically we had deteriorated to cavewomen. Luckily, this provided us some comic relief because laughing can get you through anything.

Shortly after Paul left, it rained. We panicked. We were just starting to put the Eternabond on the entire length of Mander, which meant she was super exposed to taking on water. I started running around grabbing packing blankets and pieces of polywall to throw up to Jamie to put over the exposed seams. Then we sat down in puddles of water and waited to see how bad it was going to be.  After it seemed like the rain had passed we looked at the radar and saw another round of rain may be coming. We came up with a plan to keep working but to be better prepared if it rained again. WITH THE BLUE TARP I HAD THAT I DIDN’T EVEN THINK OF USING WHEN IT STARTED RAINING. Yeah.

As soon as Mander was dry enough, we got to work applying the rest of the Eternabond. It didn’t rain again and we painstakingly finished late that evening. We basically limped into bed, fully spent. We needed our sleep because the next day was the big day. It was time for the Great Mander Move. 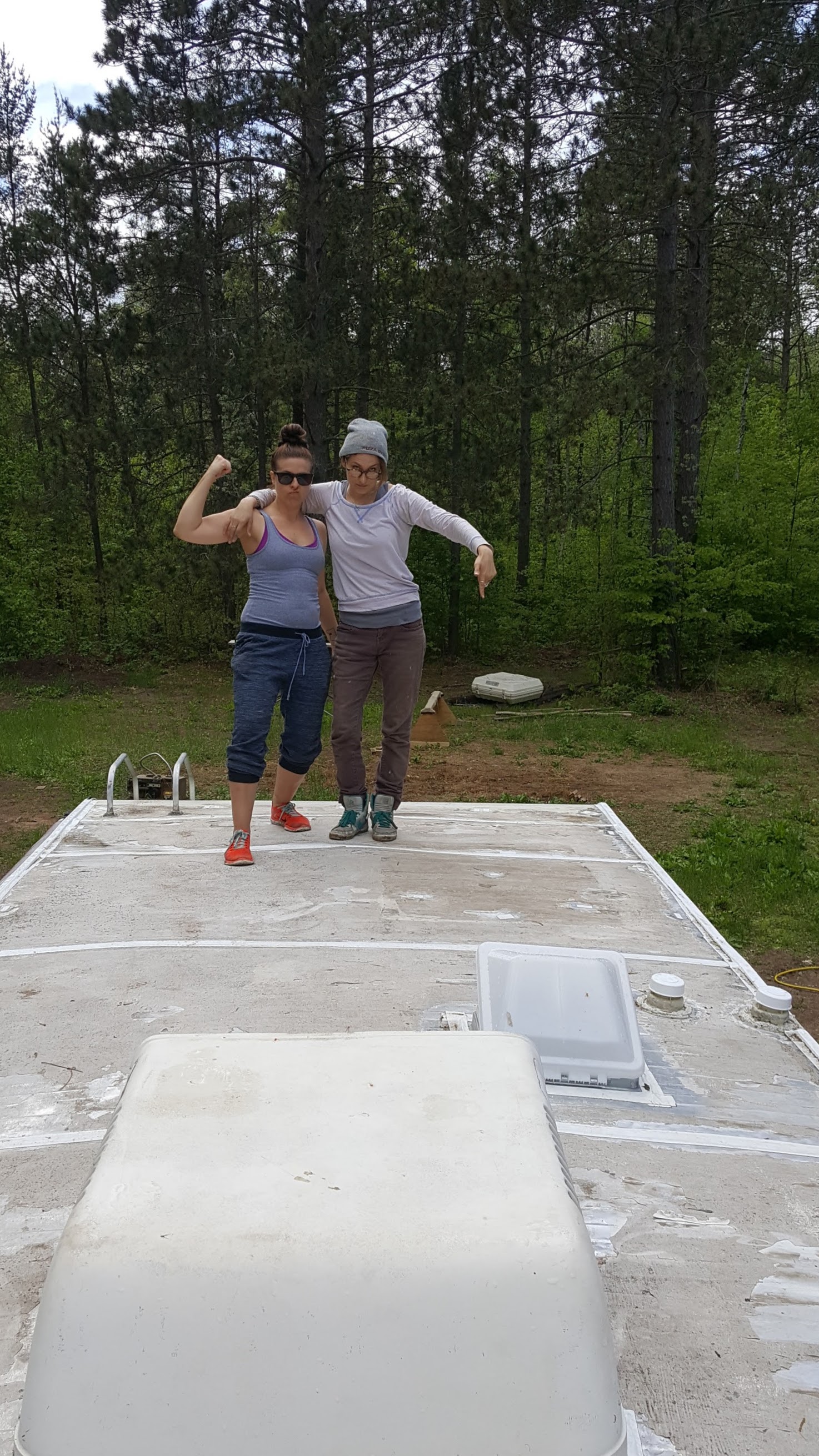 My Dad has a pressure washer and I wanted to see if it would peel up the remaining roof coating that was still stuck to Mander. No dice. Both Jamie and I really appreciate the satisfaction of seeing something clean, so even though our bodies were destroyed, we used that pressure washer to give Mander a bath instead.

I was nervous to drive Mander because I had just realized that her air shocks in the back weren’t holding air and I hadn’t driven her but one time back in July. Nevertheless, after her bath, we loaded up all my supplies, started down the long driveway and we were off! We almost made it to the end of the driveway before she sputtered and came to a halt. I crawled underneath her to check one of the fuel filters I had replaced and felt like maybe I wasn’t super confident the clamp was holding the fuel line tight enough. So I dug through the garbage we had loaded up in my car to find a hose clamp. I used my barely working hands to put it on and tried to start Mander. Nothing. By this point I had pretty much drained the batteries and was near tears because I thought I was going to have to leave Mander behind. I called my Dad to discuss how we were going to get Mander back to the yard without being able to turn her around. I decided to try one last time to start her and…..She started! Hooray!

Now some people may have taken this as a warning, thrown their hands up in defeat and turned Mander around. But did I? NOPE! I chalked it up to old gas that needed to be worked out and forged ahead! Speaking of gas, that was our next stop. I had used most of the gas starting her up over the winter and letting her run. Right as we were approaching a gas station in town… I heard a loud POP! come from the doghouse and then *lots and lots and lots of smoke* I turned into the gas station thinking, surely this is it. I’m fucked. I took off the doghouse and found that this metal thing, that apparently has something to do with emission control, had shot off the top of the engine. 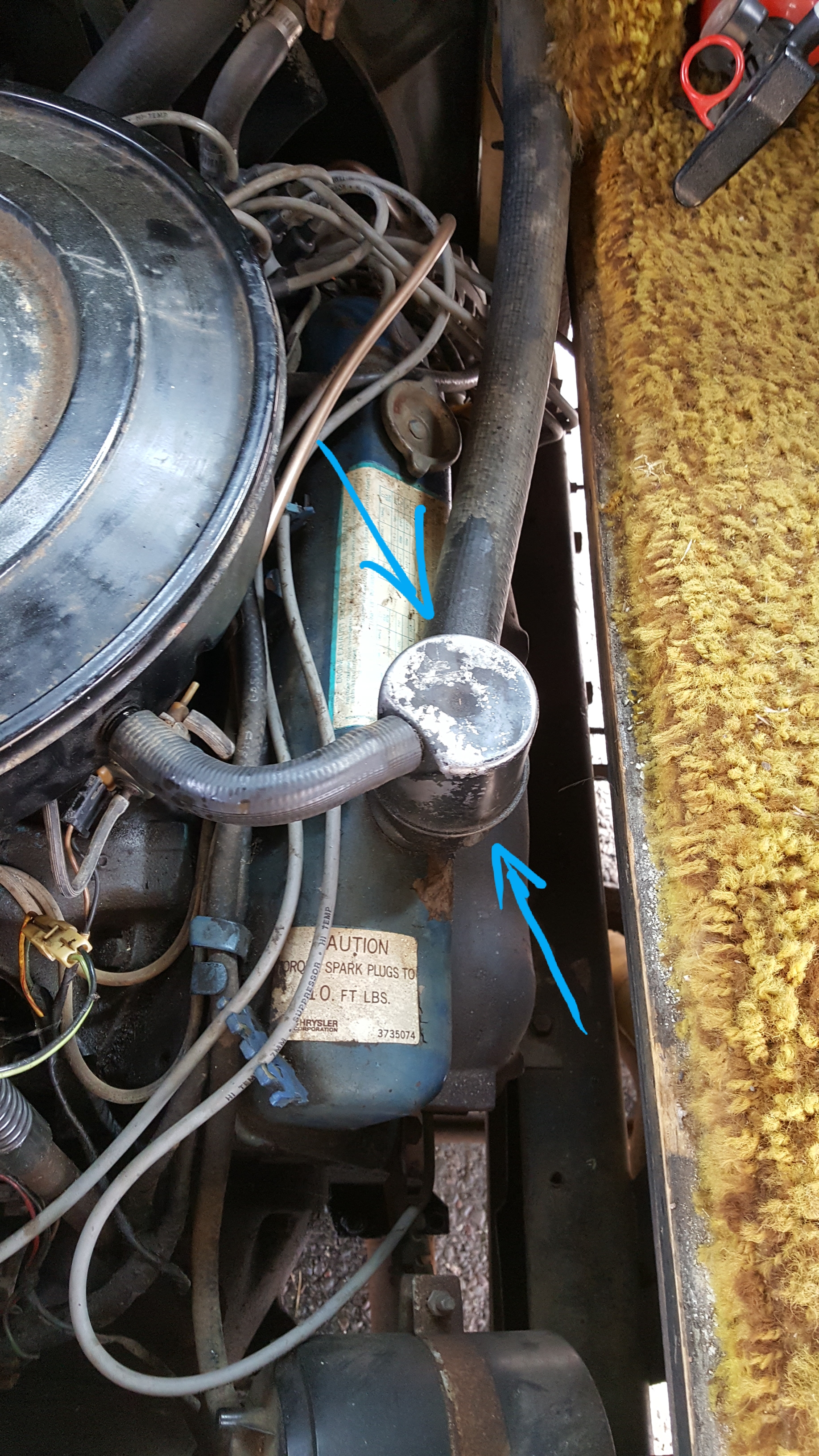 I called my uncle Buster and he assured me it wasn’t that big of a deal and we could continue on. Hooray! Since she was still coughing and sputtering I bought some gas treatment and put a very expensive amount of new gas in her. We put-putted out of that gas station and soon we were off country roads and on to the big bad highway. 70 MPH which Mander was not going to do but I got her to at least 60-65. I was scared shitless. I could hear all kinds of noises that I couldn’t identify. Are pieces of Mander gonna fly off? Are my old tires gonna blow? Is that wind or did Mander just lose power for a second? At some point my trunk door flew open and now I had the image in my head of my two spare tires that were in there, tumbling out and killing my best friend that was tailing me. Needless to say, I was very uncomfortable. Then *sputter, cough, sputter….cough….cough….die.*

We were 30 miles away from Kim’s, dead on the side of a highway with cars whizzing by at scary high speeds, my legs were shaking and I had to pee. So squatting on the side of the highway became a thing that I did while I tried to take some deep breaths and think. And this was the moment I thought, “What have I gotten myself into? I don’t wanna play anymore. I quit. I have made a terrible, terrible mistake.” I tried to start her over and over again and nothing. I tried to start her so much I killed the batteries. I called my uncle Buster and he said, “Mander has got a lot of character and you have a lot of determination. Who’s gonna win?” Well me, obviously. I collected myself and we began trouble shooting. Come to find out he had messed with the toggle switch for the front and back gas tanks and left it on the wrong tank. I was out of gas. It was as simple as that we hoped! We still had the problem of dead batteries and there was only one way to solve it. I had to pull my car in front of Mander and flip it around facing the wrong direction on the shoulder of a super busy highway so I could jump Mander.

And this was the moment Jamie said, “This is the craziest shit I’ve ever been a part of.” I drove my car in front of Mander and since Mander blocked my view, Jamie had to tell me when there were breaks in the traffic to GO! GO! GO! My heart was racing a million miles an hour but I did it! I got my car flipped around and my jumper cables were just long enough to reach. We hooked it up and she started! Hooray! Although, this time is was more like, “ok here we go again.” I flipped my car back around and we were, unbelievably, on the road again.

We finally arrived safely at Kim’s 4 hours after we had set out. It was an emotional roller coaster and my nerves were completely shot. My body ached from head to toe, but I’ll be damned if we didn’t accomplish our mission. We got Mander nestled into her new spot and Jamie and I went home. 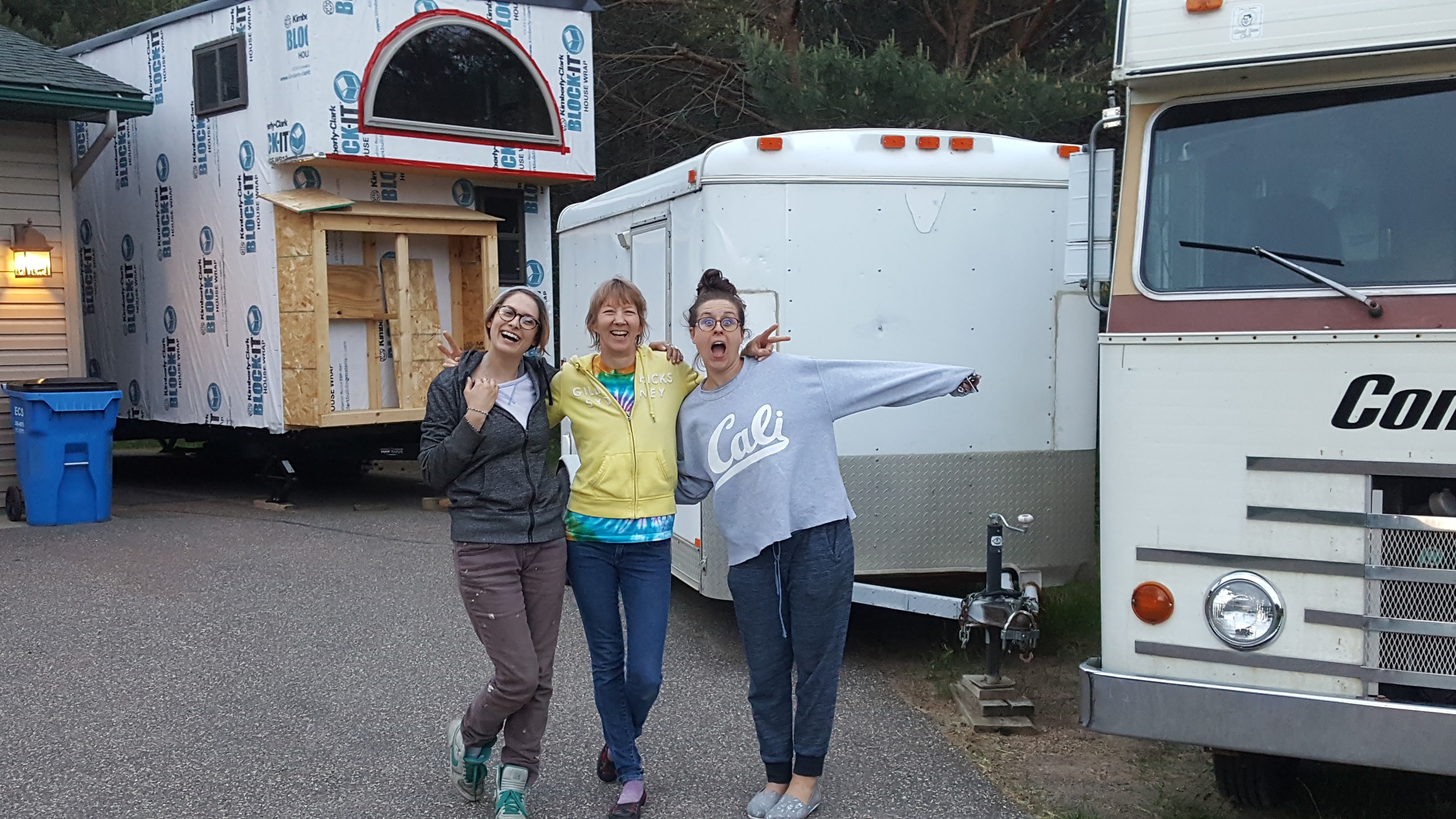 I got home and I felt very strongly like this home, the one I have now, was a much better choice. It is safe and comfortable and doesn’t blow burnt oil smoke in my face and break down on the side of scary fast highways. It took me 3 days. I wrapped myself up in this safe cocoon I have here and then I slowly came back out. I don’t wanna stay a caterpillar. The unknown is scary, that’s for sure, but there’s so much beauty on the other side, I just know there is. Now I’m laughing about everything and feeling like a bit of a bad ass. I’m scared but unstoppable and I just keep thrusting myself in the direction of a dream I have, hoping that it will come true. Here’s to a new chapter; to Mander being closer to home both physically and metaphorically! 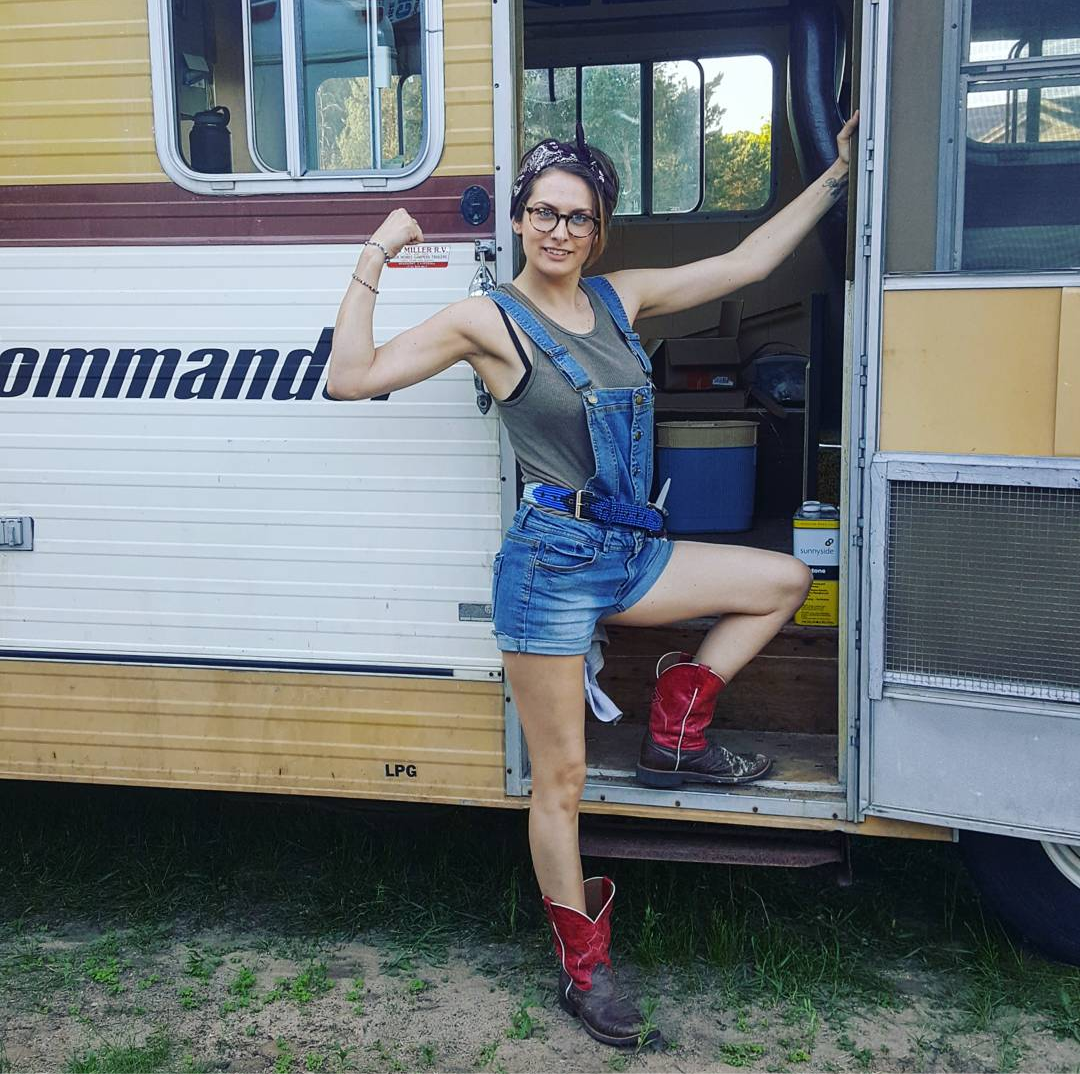