Posted on June 27, 2017 by agirlandhercommander 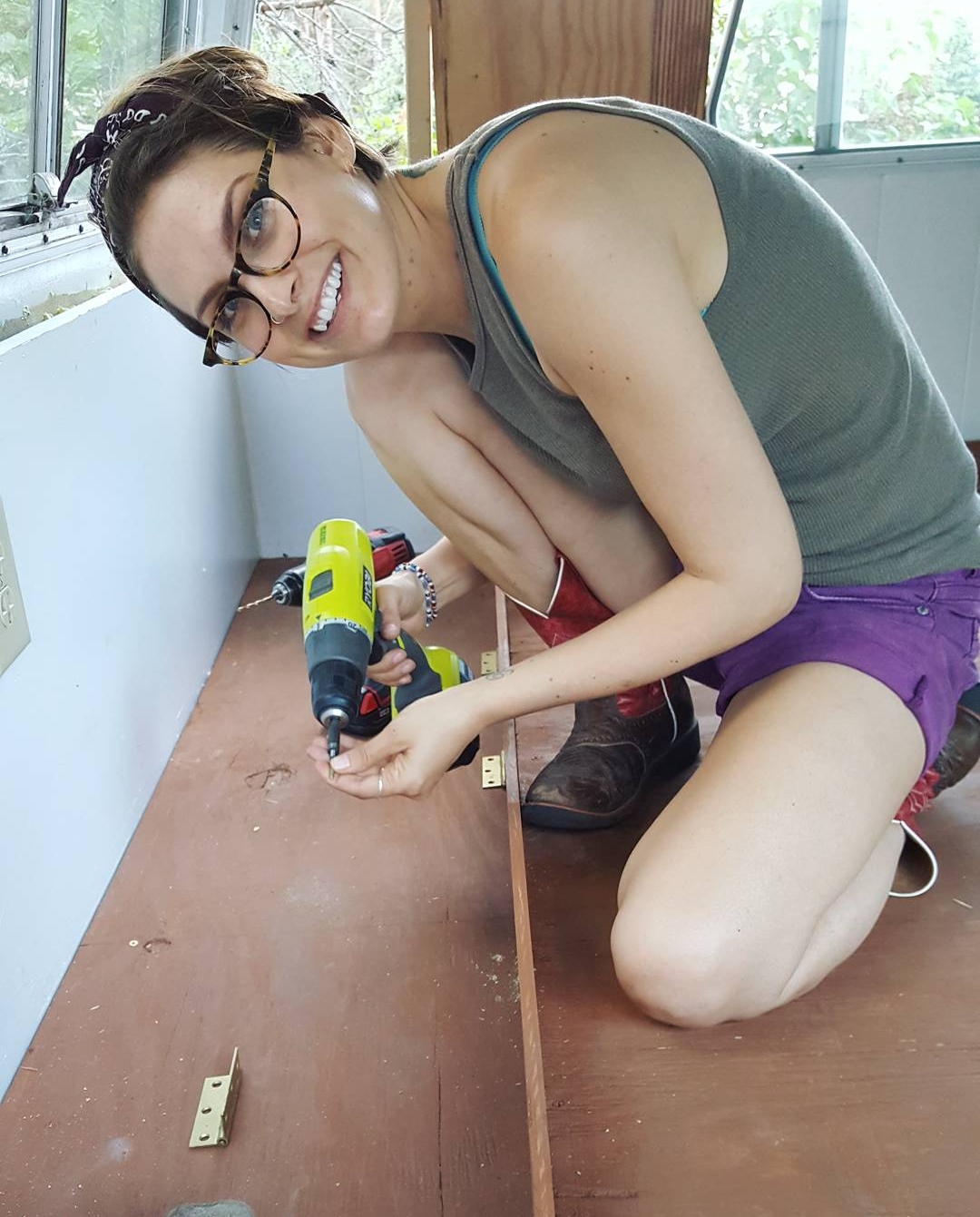 Having Mander closer to home rocks! I’ve been going to Kim’s almost daily and making a lot of progress which is super fun! I have to force myself to take a day off here and there because my hands, knees and feet start to protest so much I have a hard time being in my body without audibly wincing in pain every 2 seconds. Let me catch you up with all the stuff I’ve accomplished this month!

I had hauled over a bunch of wood to Kim’s and was anxious to start making a dent in it. The first thing I got to work on was building a bigger, better, stronger back ledge. Originally Mander had a narrow ledge under the window but it was really water damaged. I ripped it out with visions of a wider one with storage underneath. 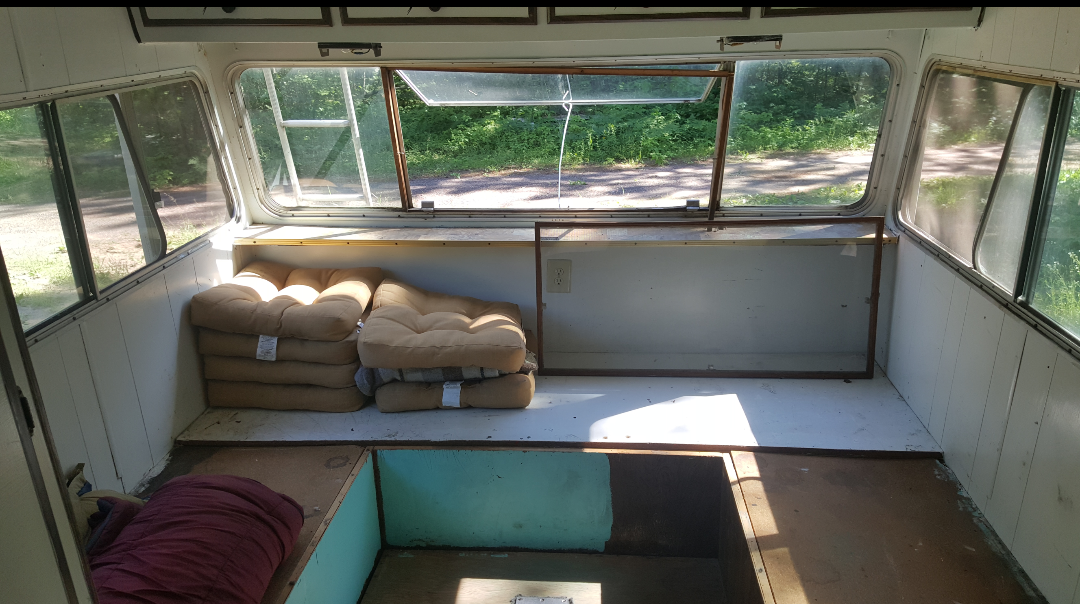 I got to measuring Mander’s crooked ass (literally) and started building the frame. 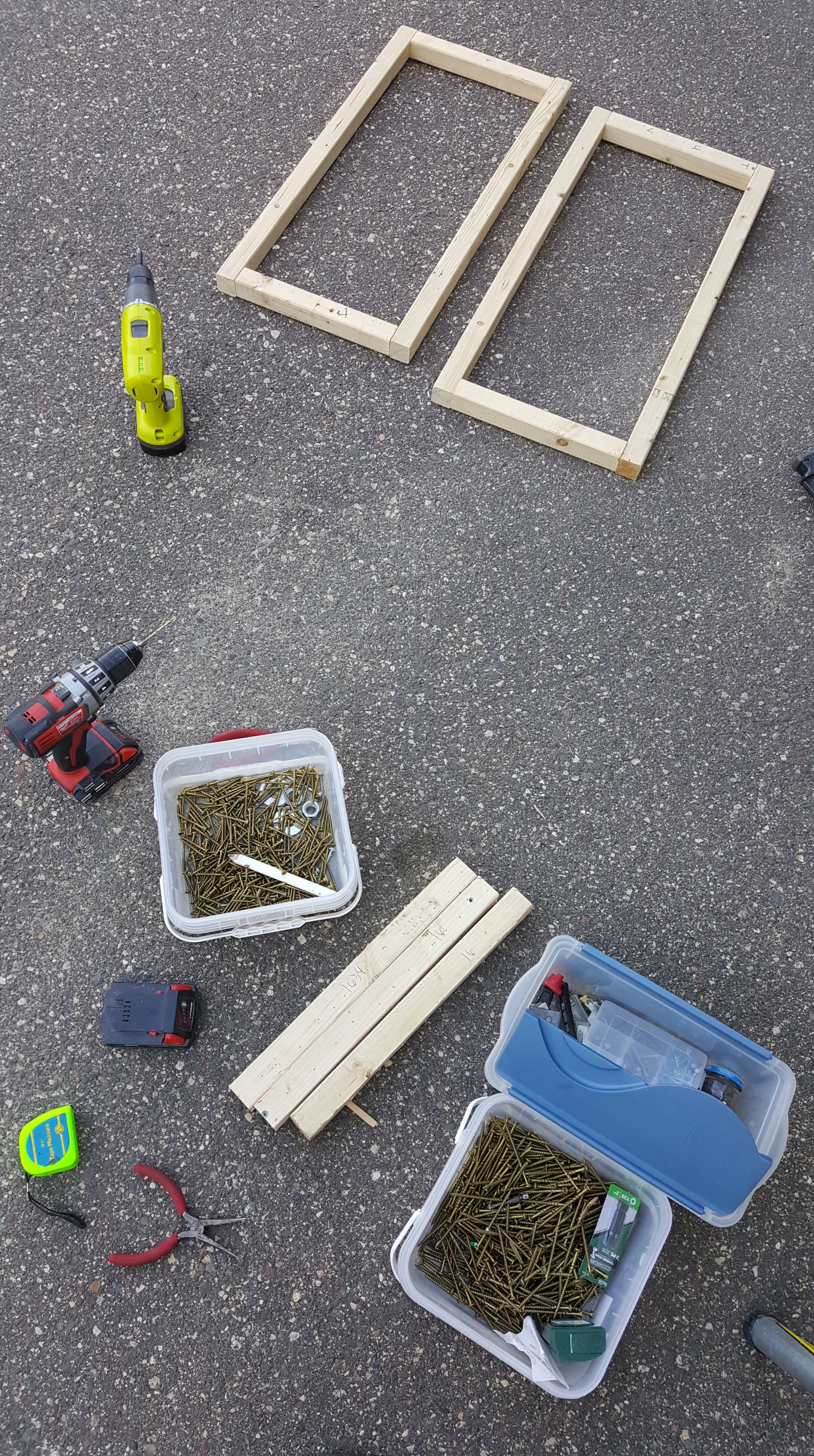 Then, once I had some boxes built, I put them in place and they were ready to hold my much wider ledge!

Once I knew everything was going to fit, I pulled it all out and added boards to encapsulate the 2 end pieces.  Then I mounted the hinges to my bed platform because that area was about to get really tight. Once my hinges were installed, I brought all the parts back in and started gluing and screwing everything together. Now that this ledge is in, I can see all the uses it’s going to have! The top can be a cat perch, a place to eat, a computer desk and a gaze at majestic views and daydream platform. I’m not positive what I’m going to do for faces on the bottom storage compartments but I think I’ll make one compartment into a panic room for my cats. 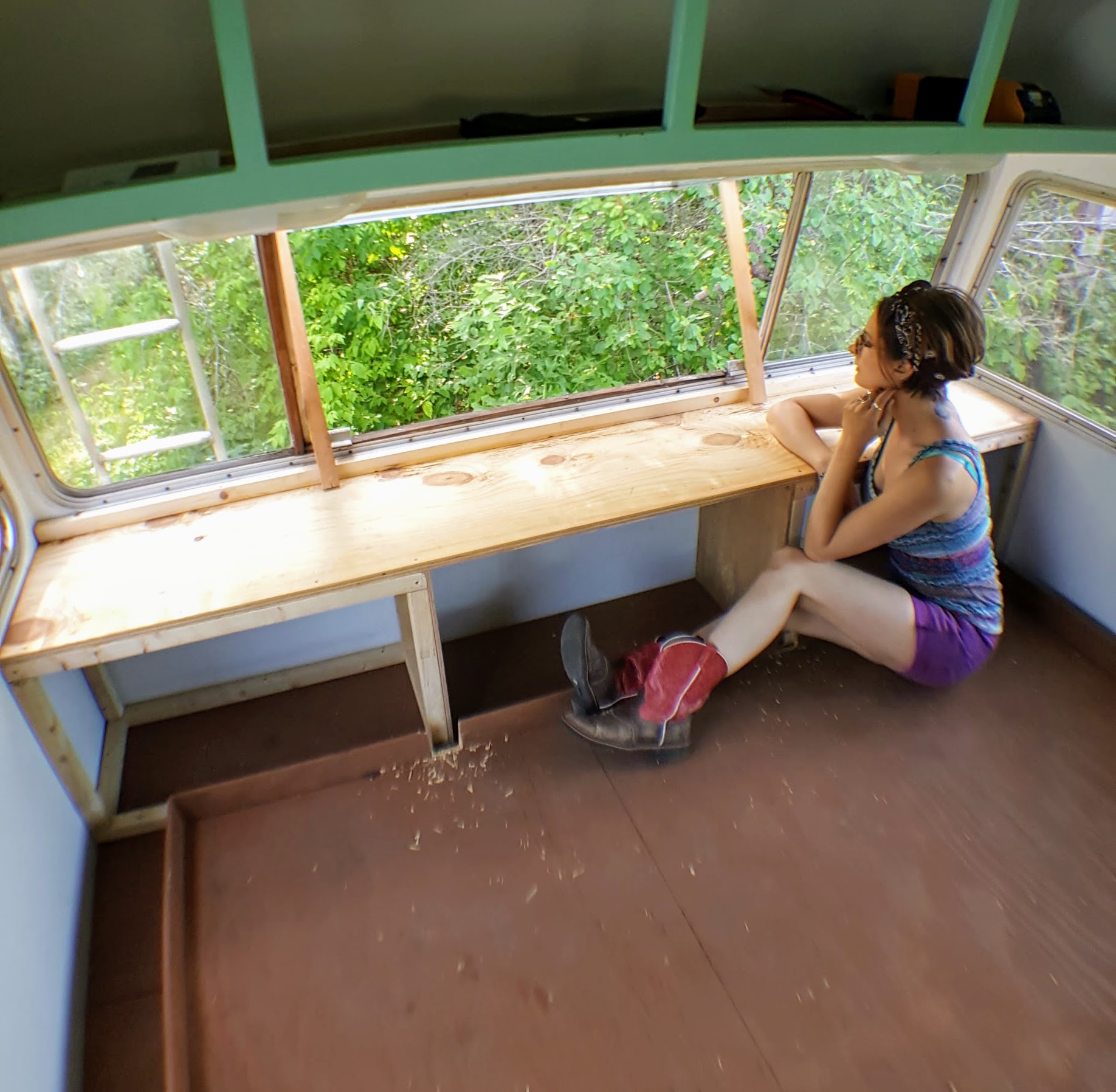 With this done, I was getting close to wrapping things up in the bedroom! Now that my bed platform was on hinges, I could lift it up and work underneath it. Since underneath my bed will be storage, the skirting that was previously made from paneling wasn’t gonna cut it. I had long ago ripped it out and now I was ready to replace it with a little more durable plywood.

Lastly, I needed to frame in the water lines to protect them. This will also serve as a “stop” for my storage so my bins don’t go sliding out. First, I framed it out with 1×2’s and then I cut a piece of plywood for the top. I was pretty proud I got the cuts right on the first shot!

Hey, have I mentioned how much my Uncle Buster rocks? He rocks SO. MUCH.  He had a break in his work schedule so he offered to come do some Mandering! The day he was available, I had to work but that didn’t stop him! He got up bright and early and knocked out a bunch of stuff without me! It makes me feel so stinking special to know that someone believes in my dream and wants me to succeed so much that they will give their time and bust their ass like it was their own project.

In my last post I talked about discovering that my air shocks in the back no longer hold air. No bounce, no bueno! Since Mander is a rare creature, it’s always hard to track down the correct parts for her. I gave my Uncle the vin numbers and he was able to find new shocks….then he installed them!

By the time I got off work he had not only replaced the shocks (one of which did not come out easily), but he had also removed the gas line and wiring from the old generator, built a platform for the new generator to sit on, sweated a cap on a waterline and pulled out a busted line that needed to be replaced. Buster is an unstoppable mandering machine! If that wasn’t awesome enough, he gave me some great news! Some friends of his have been watching my progress and wanted to help. They wired Buster $200 to give to me to put towards the cause! I was completely touched to say the least. I feel a bit like I’ve won the Kind People lottery!

I was walking on air and ready to start tackling some more projects! Mander has an awesome back window that opens but doesn’t have a screen. Someone along the way fashioned a screen that attaches but since then, it has become water damaged and completely fallen apart. I was able to salvage the actual screen part but needed to build a new frame. I needed 1×1’s, which I didn’t have, and since I’m frugal and didn’t want to make a trip to the store, I decided to use the jigsaw to cut 1×2’s in half. I can’t say they were perfect, but considering I didn’t have a table saw or even sawhorses, I think they turned out pretty good! 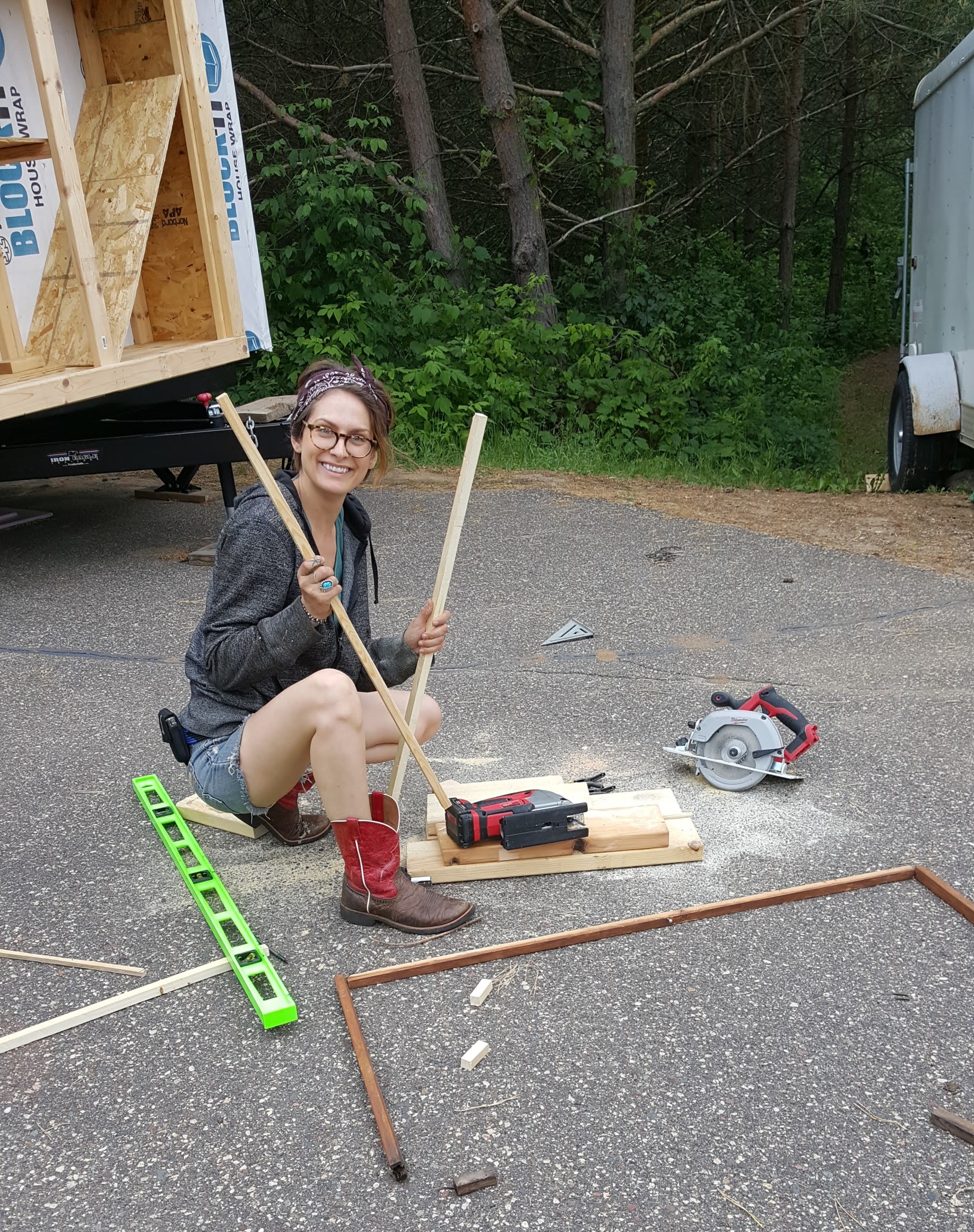 After I cut all my pieces, I swapped over the hardware and installed it. Now I have a new frame that the screen clicks on and off from! This is something that seems not so important right now but I think it will be something I appreciate having every single day on the road. It will be so vital to be able to have airflow without my cats escaping or being eaten alive by bugs!

On with window open!

Then it rained on my parade. It was a hard rain and Mander leaked.  Last month, when Jamie and I were doing the Eternabond application on one side of Mander, it rained. We thought we had dried everything up really well before we continued to work but I think there must have been some moisture trapped because that side did not adhere as well as the other side. Although this sucks, there was really nothing we could have done differently. The next day was a total washout so we needed to finish the job that day.

The dirt and debris was not under there before the downpour.

Cutting up the eternabond.

With water getting under the Eternabond it nixed the stickiness so I started pulling it up. Seeing so much of our hard work being undone, knowing I had to redo it and having a wet Mander was a hard pill to swallow. But I swallowed it. Afterall, it was just one sucky thing among all the amazing things that have been happening! I bought some Sikaflex and went around all the seams of the Eternabond to create another seal and used it to fill all the voids where I had ripped up the Eternabond. 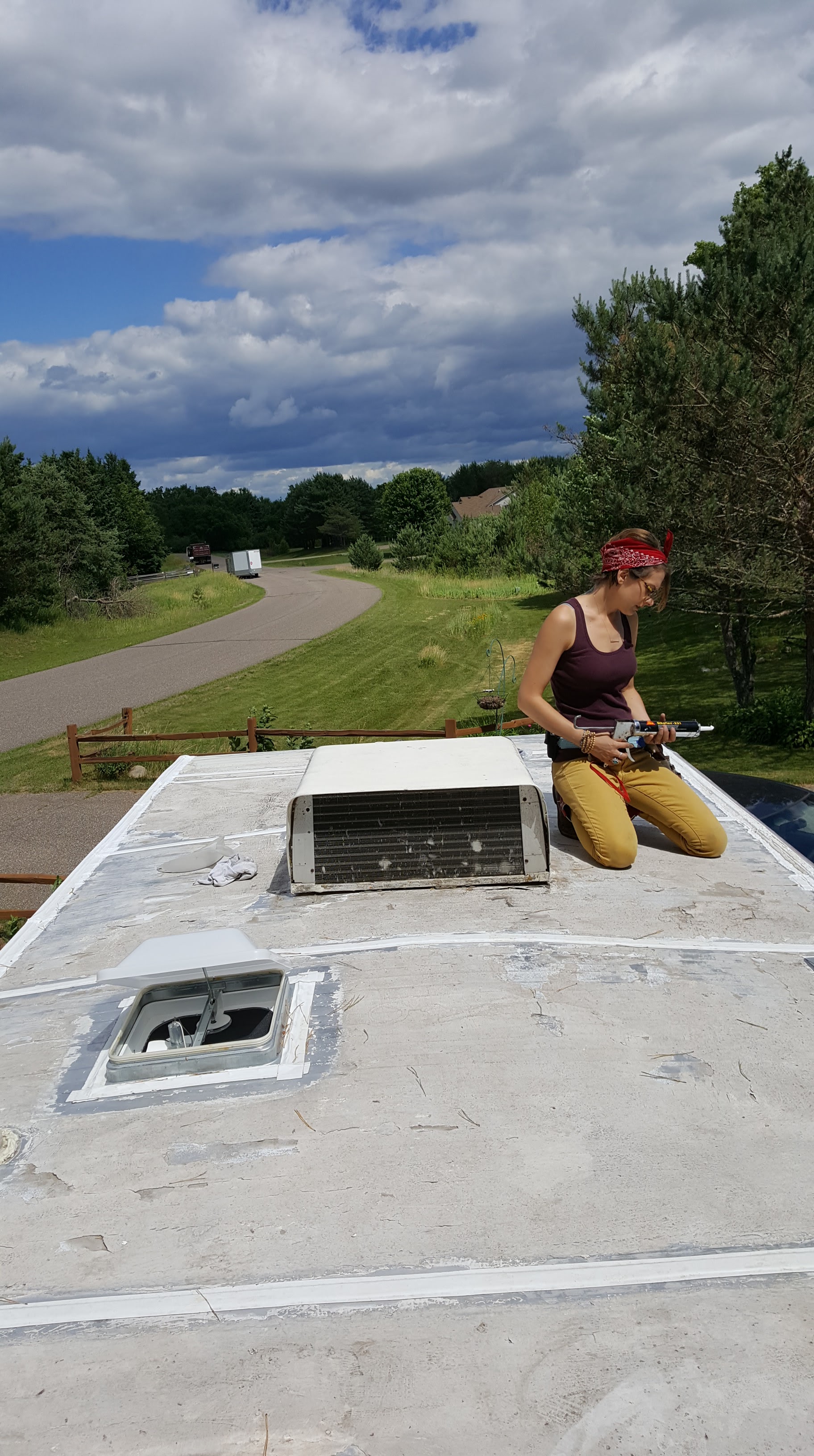 After a day of working solely on the roof, I was feeling better about the possibilities of being watertight. Only thing to do was to wait for another rain to find out. It wasn’t long before it did just that…It rained and she was dry! Then it rained again, this time much harder and she wasn’t. It was definitely less wet than before, so I think I am getting to the bottom of it. In the meantime, every time it rains, my eyes rain a little too. Haha. Onward and upward!

Back to the amazing things that have been happening! My Grandma sent me a check to buy a new tire to replace the “spare” that the previous owner had put on. And oh boy am I glad she did! The spare had dry rot and a buldge! Since my tires are a rare size I had to order it online and find a place that would mount it to the rim. Once I got all that taken care of, I was ready to change a tire on a dually for the first time! Luckily Tom, Kim’s husband, was there to help me because Mander’s tires are heaaav-y.

I’ve been doing a lot of work on my bathroom and it’s starting to look better and better! My bathroom used to be a tiny room with a toilet, a shower and 2 doorways. Now it only has one doorway, no toilet and it’s going to be just a shower room. Here’s a series of photos to show the progress.

First I painted the walls before I blocked off one of the doorways. Then I used lauan to make a new wall. I filled the wall in with 3/4 styrofoam and then 1/4 styrofoam to equal the 1″ gap because, once again, I’m frugal, it’s what I had on hand and I didn’t want to run to the store. After I filled the gap in, I finished the inside off with lauan and painted it. I’m getting to the finishing touches and I’m super excited to show it off to you when it’s done! Any day now!

I am also starting to inch my way into the kitchen area. I decided I would keep the cabinetry but I’m putting in a new counter top, a new sink and refreshing everything with paint. Getting the old counter top off took an insanely long time. As does most things in Mander land.

Another couple highlights of this month were my Mom and my friend Krista came to see Mander for the first time and put in a little work! I’ve been concentrating all my roof work on the seams so there is still a lot of work to be done scraping the old coating off to prepare for painting on Kool Seal. I was super excited to show both of these wonderful women my project because they have been so supportive! 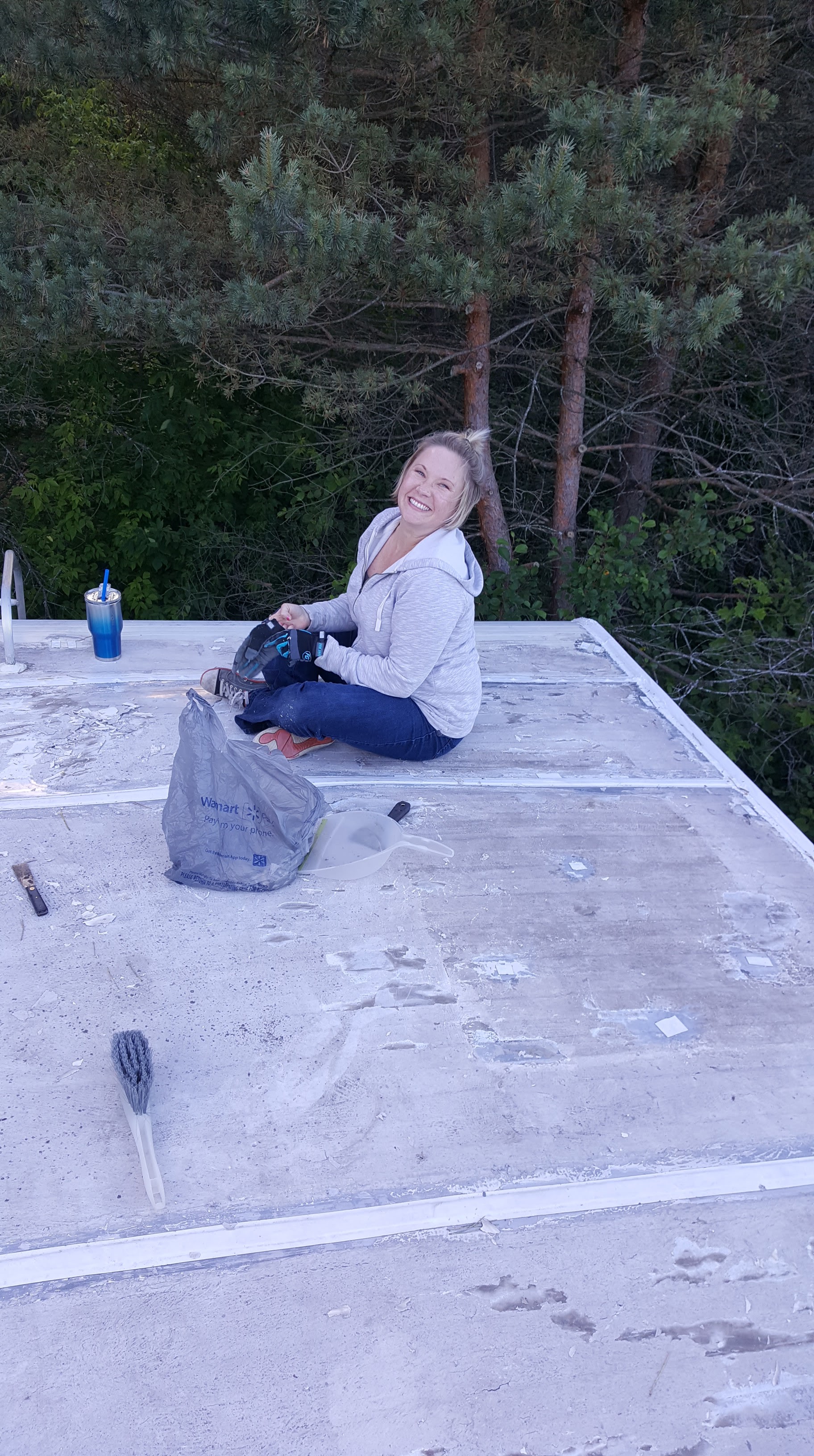 Between being able to show more progress, Buster helping me with some pretty important things, being gifted $200 and a tire, being able to show more loved ones Mander, getting help from said people and Kim and Tom being the most welcoming, helpful, supportive and kind human beings, I think it’s safe to say this month has been a MAJOR success! Some other awesome extras this month have been getting my motorcycle license (conquered a HUGE fear of mine) and reaching over 2,000 followers on Instagram! I will now be able to legally drive my scoot and have an alternative mode of transportation when I’m living in Mander. Building a following on Instagram will hopefully open up opportunities for sponsorships and at the very least, welcomes a ton of super rad and supportive people into my life! Just goes to show that sometimes you wanna set something on fire and walk away but then you don’t and instead YOU get lit on fire with so much love and positivity!

← Consumed{Coffee Filters}
I Burned Out →