Posted on July 25, 2017 by agirlandhercommander 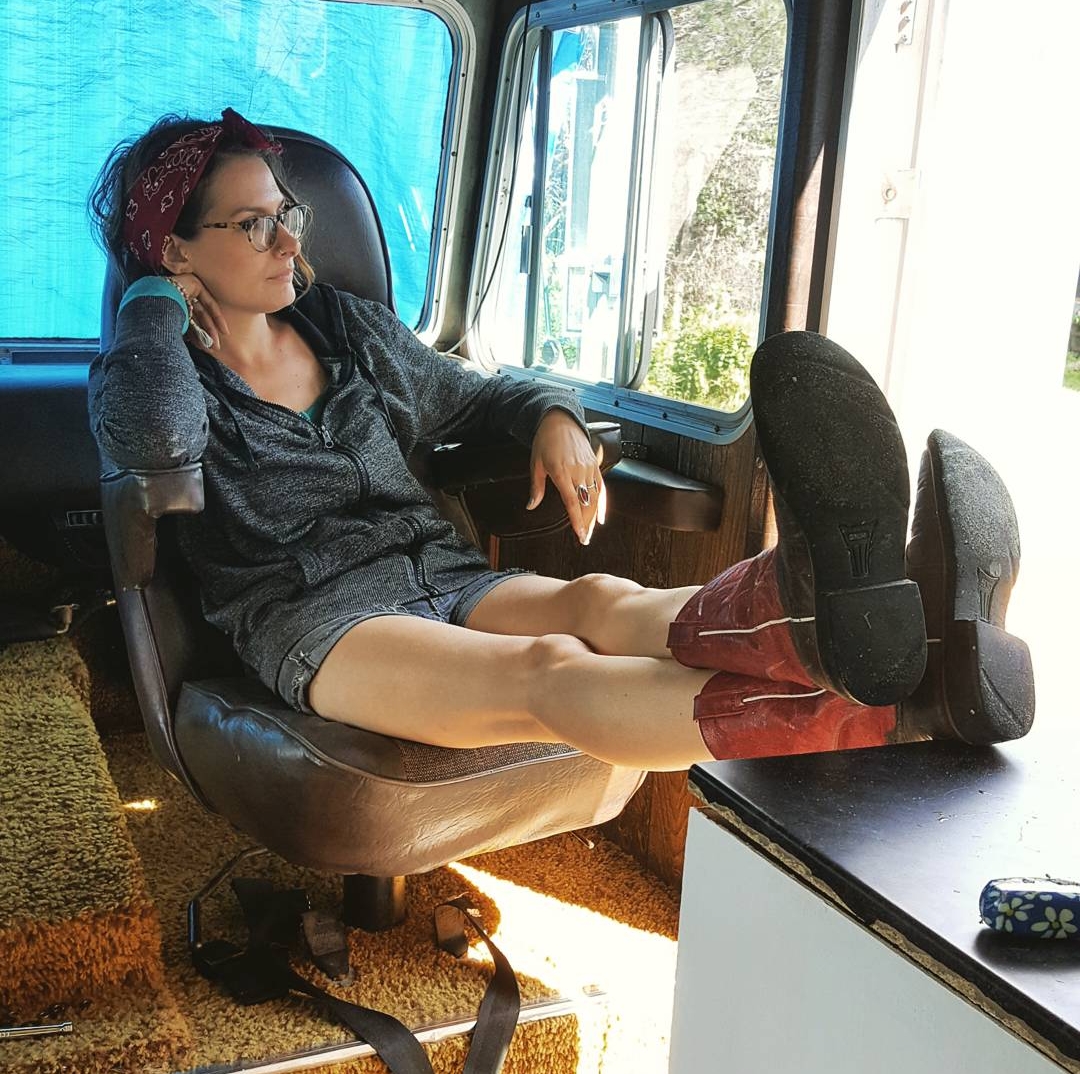 It’s true. If you burn a candle at both ends, you run out of wax. Then you’re stuck in bed with a cold on a beautiful summer day when you should be working on Mander. I’m pretty sure that’s how the saying goes.

About halfway through this month I realized I couldn’t sustain my current schedule. My brain was mush and my body was aching from head to toe. Something had to give. So I did some thinking and decided it would be best to start phasing out my job and focus more on Mander and self care. It was scary to think about quitting my job in advance of leaving but I felt strongly about wanting to go into my new life not completely destroyed. I will still be doing a little bit of paid work in August but will have a lot more free time to squeeze in some R&R when I need it.

Even though my health suffered for it, I did get a lot done this month! I finished off my shower, which makes it the first completed room in Mander. After I painted the walls with porch and floor paint, I put silicone in all the seams and started installing the aluminum tracking. I also installed my new faucet and shower head. 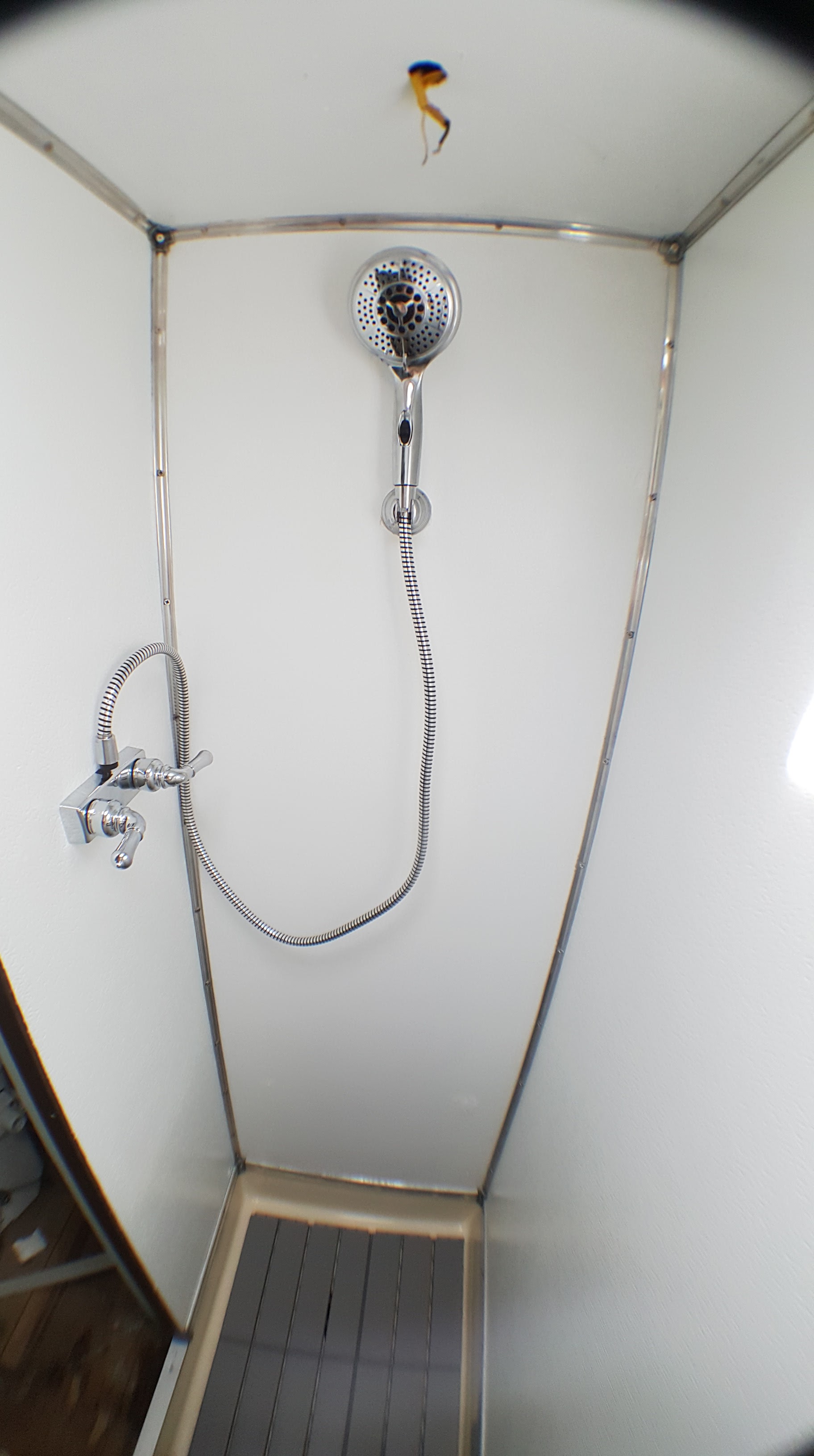 Since this room used to have a toilet in it, I had to figure out a way to hide the hole that was left from it. I had kicked around ideas and hadn’t come up with anything I really liked. Finally, I saw these decking pieces at Ikea! They can be cut to fit, allow water to drain through, lifted up to clean and they hide whatever nonsense you have going on underneath them. Perfect! I also decided I wanted to add something special to the ceiling. 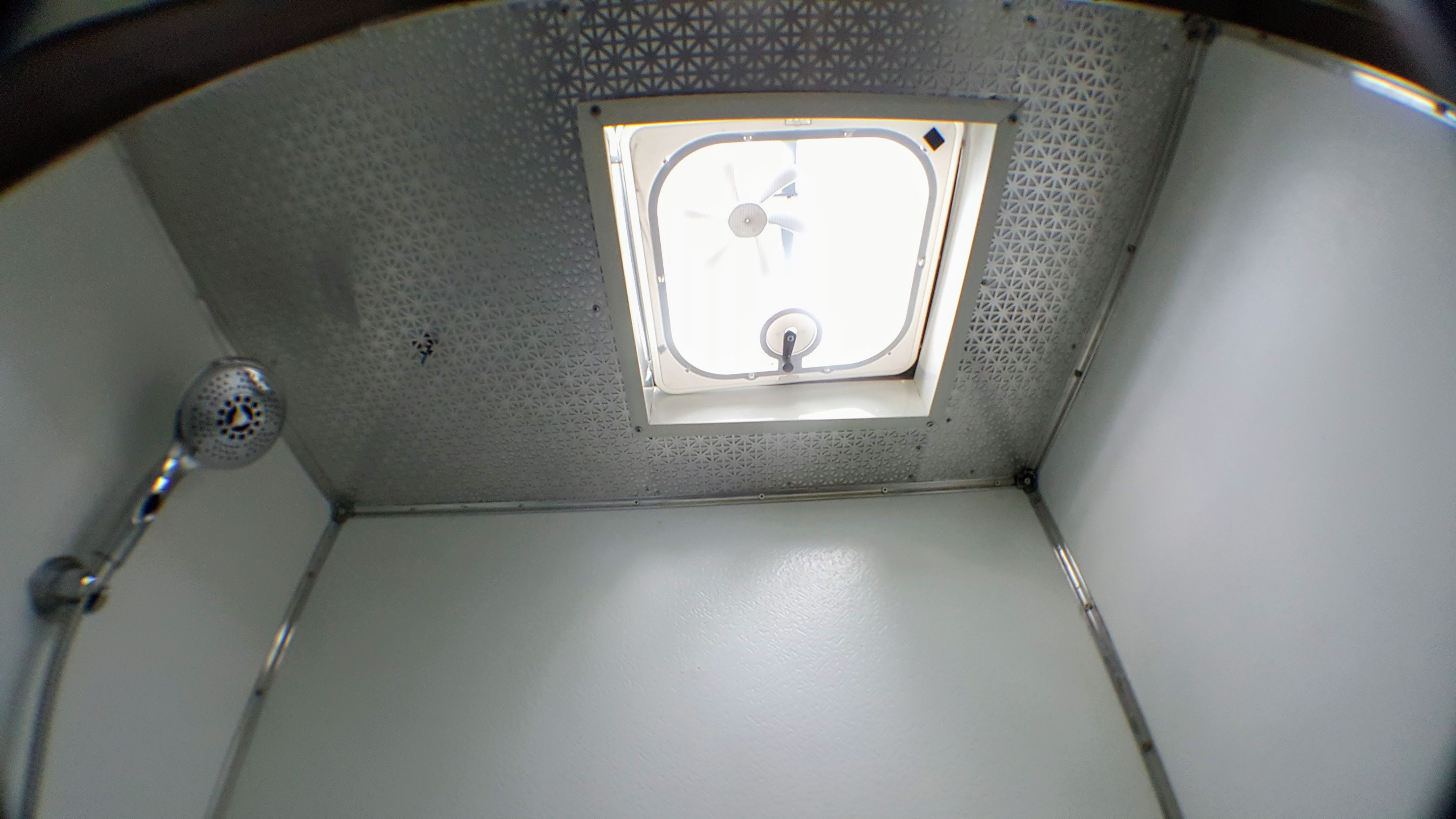 While I was wrestling with the punched aluminum for the ceiling, my friend Krista came over and got started on my closet!

She got the first coat of paint done, I followed with the second coat and swapped out the hardware. And Boom! Another thing checked off the list!

Since Mander is closer to the cities, I have more awesome people willing to lend a hand! I got another roofing crew together and we spent the day scrape, scrape, scraping away.

We made some good progress and now I can almost see the finish line when it comes to painting on that Kool Seal. Big thanks to Brent, Jenny, Tiffany, Melanie and my sister, Trinity! You all sacrificed your hand muscles for me and I appreciate it.

As I mentioned in my last post, I’ve started work in the kitchen. This month, I demoed out the nasty bottom to the upper cabinets, painted the water damaged wall in mold killing paint and painted everything else white.

I scored a damaged 10ft counter top at Menards for $25 and hauled that sucka in my tiny car to Kim’s. I cut the chunk off I needed and quickly realized I had measured wrong. There is a lip that hangs over the front of the cabinets and I measured including that lip, when I should have excluded it. Sigh. I decided to just bust the lip off and deal with covering up my mistake later. I also bought some expensive back splash to cover up my jacked up, water damaged wall. Since it was expensive, I was hemming and hawing about how to successfully cut it. Kim had the smart idea to spread some paint around the edge of the window and then press a piece of cardboard onto it. It worked! I cut along the paint outline and I had my template! 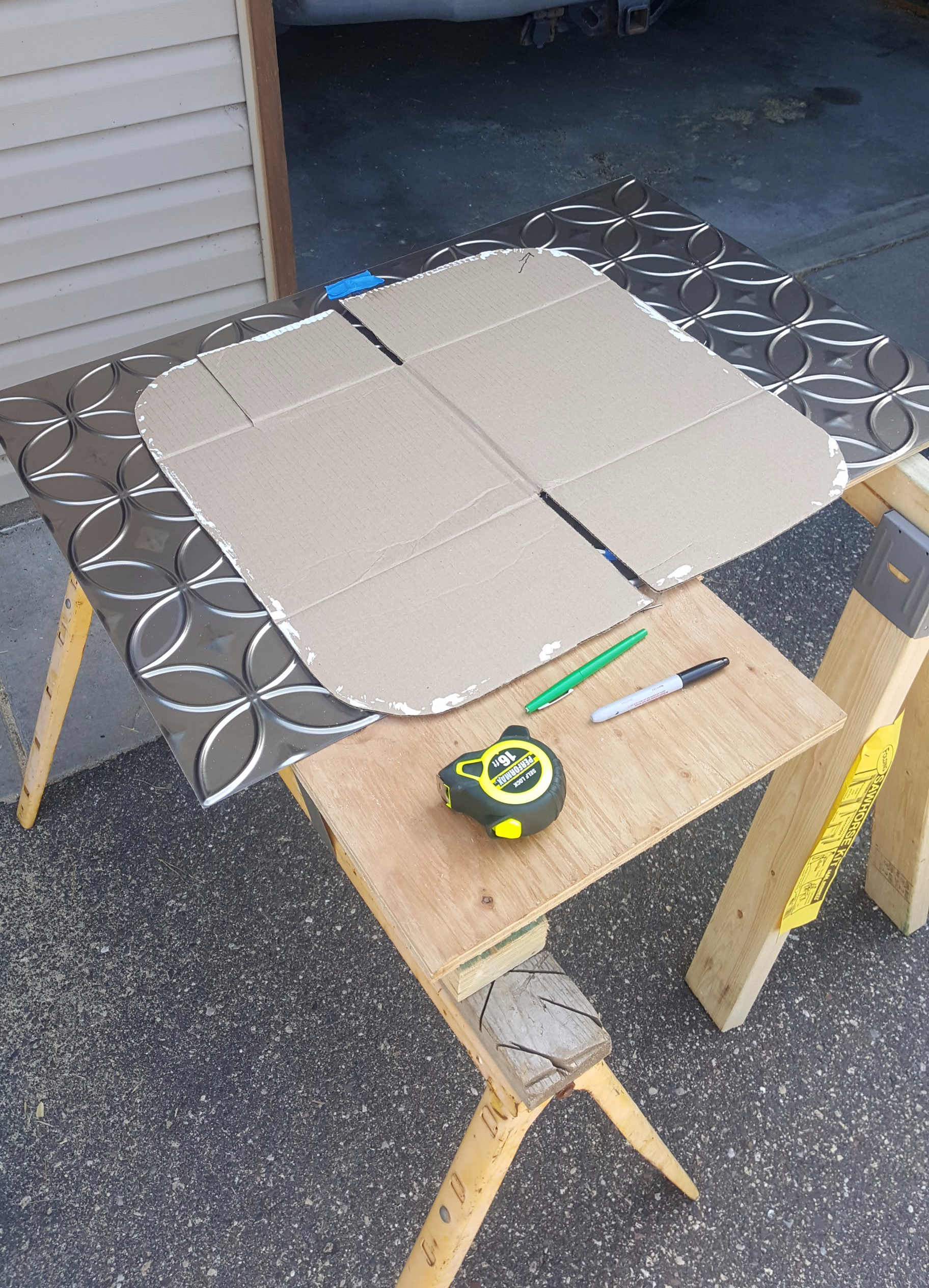 After I messed up cutting my counter top, I was reluctant to cut the hole for the sink. I finally put my big girl pants on and did it. It turned out awesome!  With the back splash, the new counter top and sink in place, it was looking a million times better! 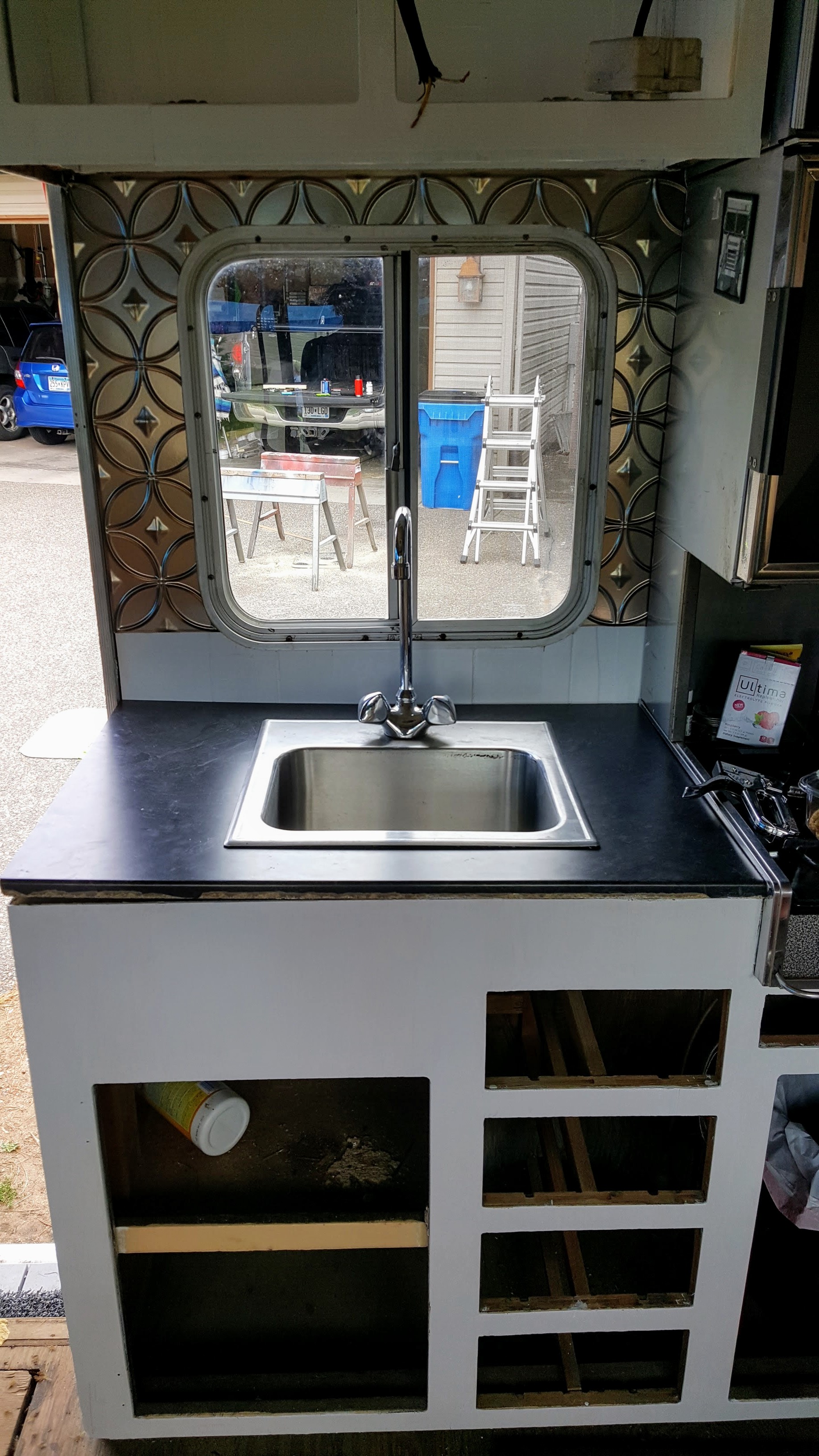 Ever since the tarp came off Mander I’ve been chasing leaks. The front, passenger side of Mander has had major issues since before I came to own her. I kept trying different things to get that corner sealed and eventually I got it to the point where it was as good as it could get until I could rebuild and replace all the screws. The whole corner of the ledge had rotted away and the wood around the window was starting to go too. 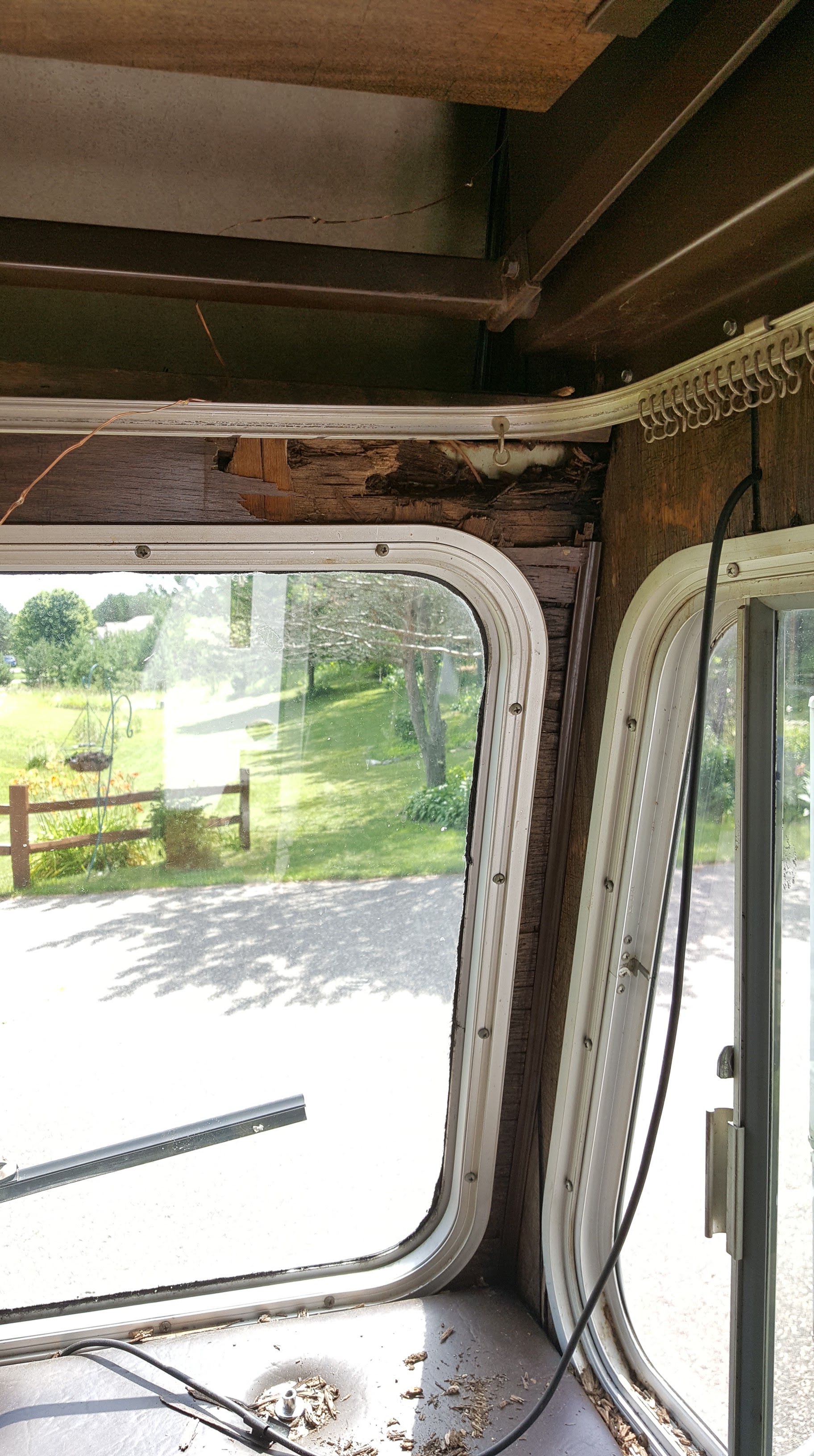 This was a situation where I needed someone with more carpentry experience to weigh in. Enter my buddy Eric! It was hot as hell that day, we got sweaty and dirty really fast but we got that ledge torn out.

We needed a break in the AC so we took off to Menards to buy some lumber for the ledge. Once we got back, we were both not really feeling like moving around too much more in the heat so we kinda just poked at things and then called it a day.

Since we don’t have a table saw at Kim’s, Eric agreed to take the lumber home and custom make a new ledge (lucky me!). There was an angle on the edge of the old ledge and it was a true inch thick which apparently you can’t buy anymore. I wanna know who was in charge of coming up with how they cut lumber nowadays because it makes no sense! “I know! Let’s call it an inch but really lets make it 3/4.”  2×4’s aren’t 2×4’s, 2×2’s aren’t 2×2’s. I mean, I don’t understand how anything gets built in this crazy ass, mixed up world of wood. Cut it whatever size you want, but why can’t you at least just call it what it actually is!?

Anywho, Eric brought the pieces home and glued a couple together to make a true inch and cut the angle. After I cleaned up all the rusty screws, staples and what was left of the rotten wood, I picked up the new ledge from his place to bring to Mander. He cut the ledge in half so I could install it in sections. Here is the first side going in. 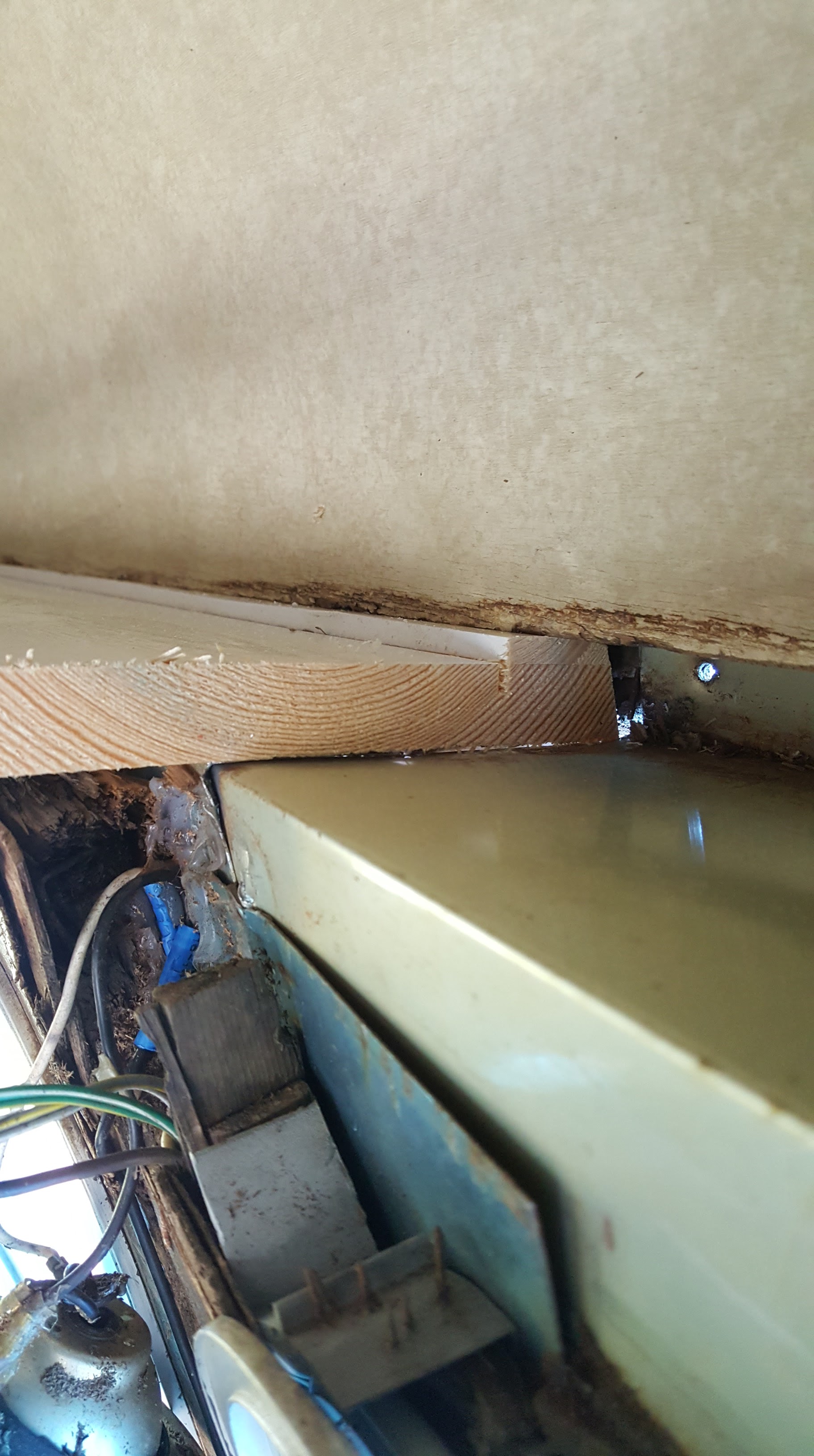 After I hammered both pieces into place, I went around to the outside and put in all new screws with rubber washers. 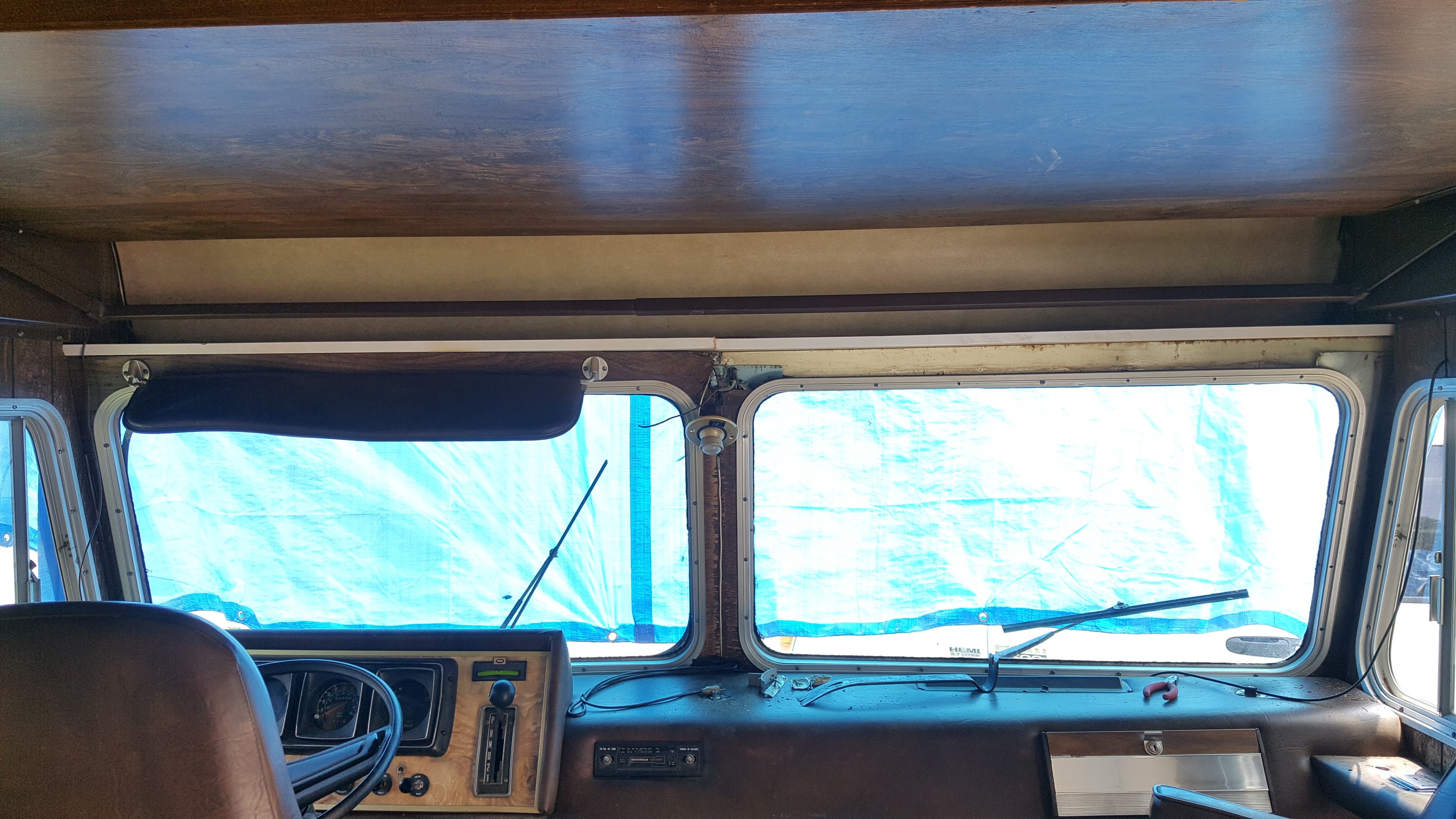 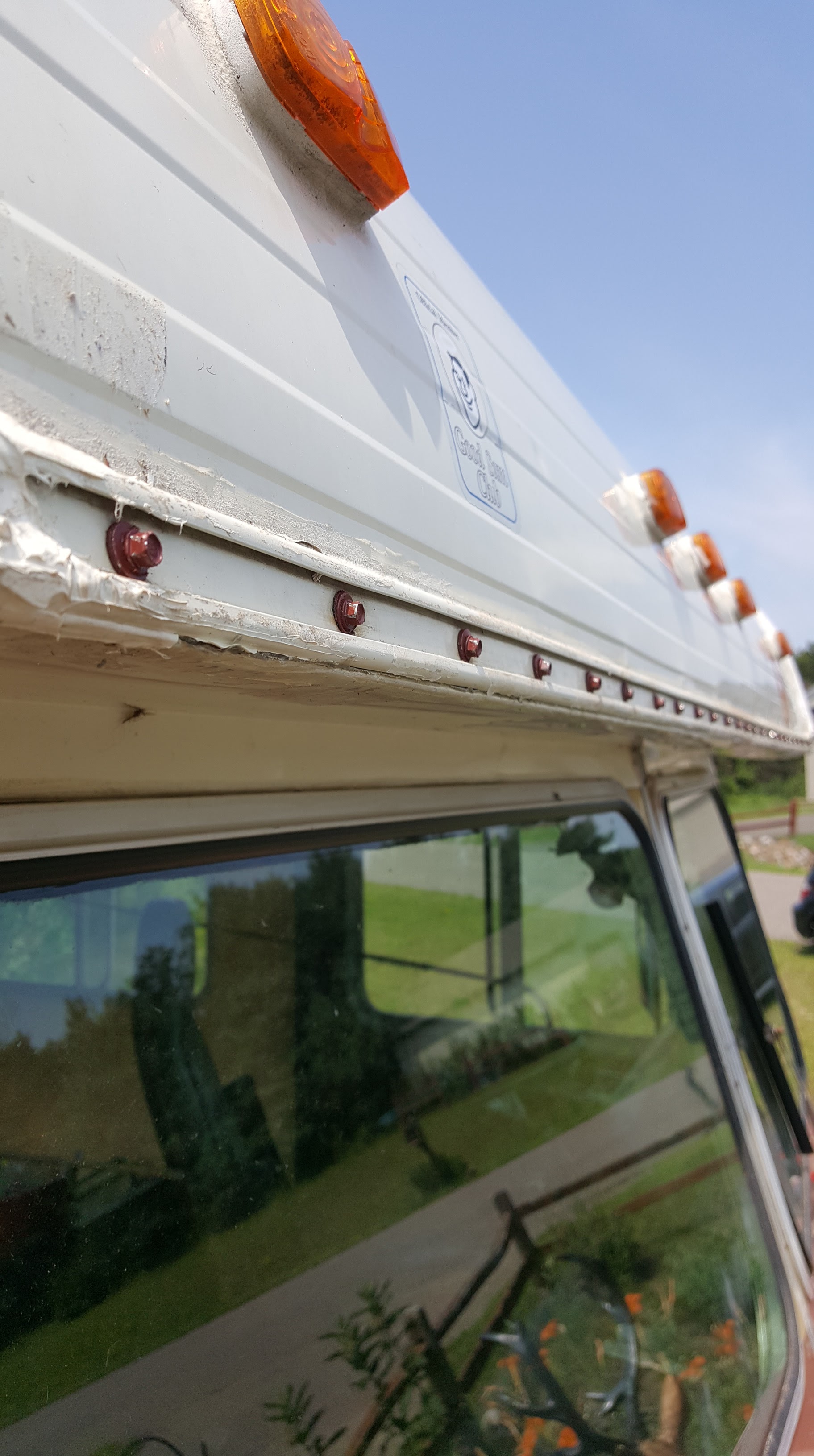 Then I filled that whole track up with goo. SO much goo! My favorite goo moments were on the corners. There were two aluminum caps on each side that I had taken off. I filled those corners with so much goo that when I put those caps back on, it oozed everywhere! Ain’t nothin’ says watertight than oozing goo.

I had taken out the passenger seat to work on the ledge and knew it needed a fixin’ before I put it back in. The wood holding the bottom of the seat had broken so it was much floppier than a seat should be. I cut a new piece of board to replace the broken one but it was a little thick to thread the nuts on…Thank goodness Kim came with the 110lb assist.

After she bounced around on it for a while, we were able to get the nuts tightened and it was as good as new!

You know what else happened this month? I got a solar panel! I found a guy on Craigslist, Bob the Solar Enthusiast, who sells panels and teaches you all you want to know about solar. I took a drive out to his beautiful property, asked a bunch of questions and left with my AC in my car recharged and a solar panel hanging out the back. Yes, Bob found out my car’s AC was out and offered to charge it! He taught me a lot about solar and said I could call him anytime with questions. I feel like that alone, is worth the $175 I paid for the panel! 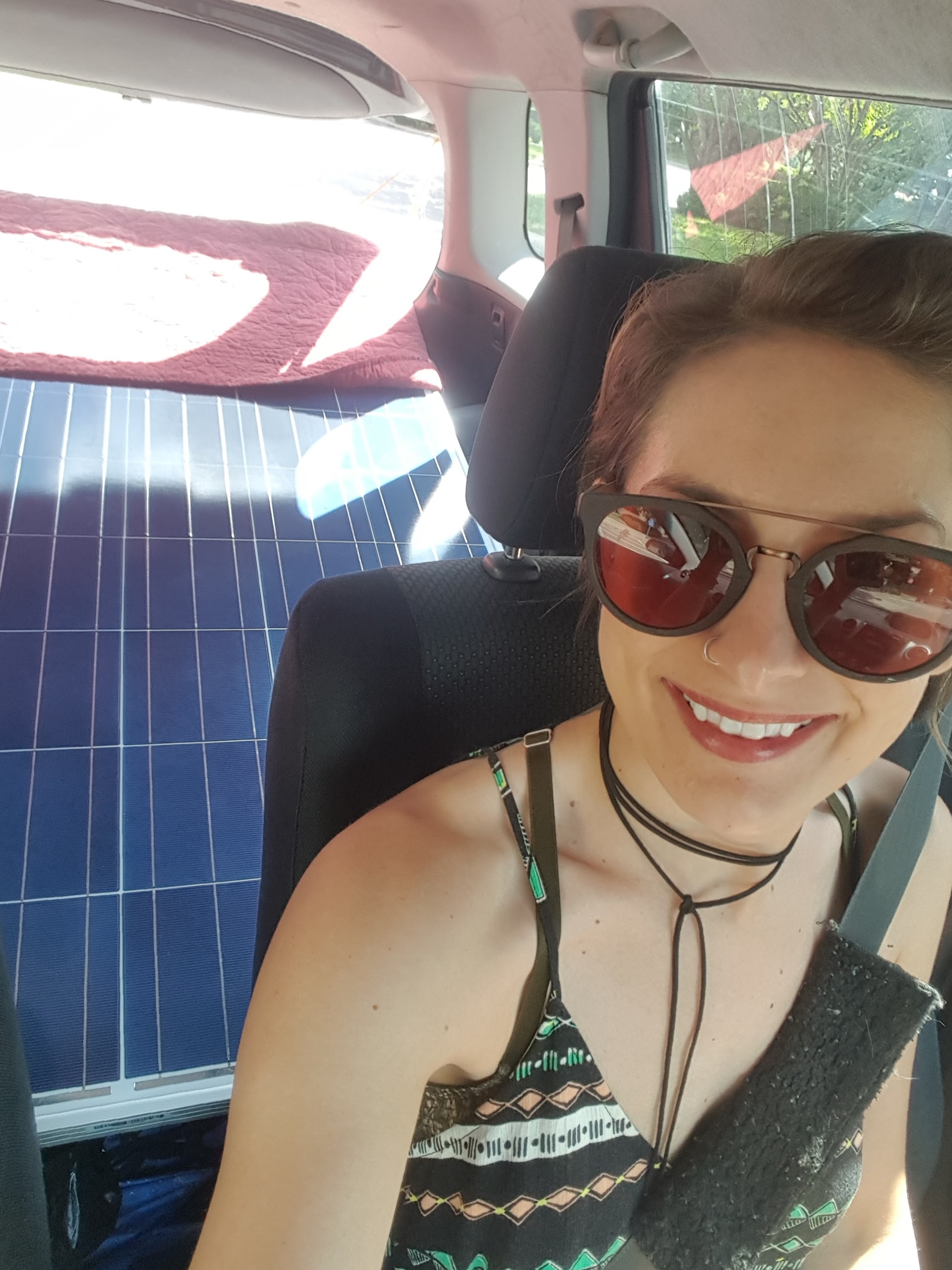 It’s been a whirlwind month and my decision to move self care a bit higher up on my priorities list has been affirmed by getting sick. Luckily, these germies seem to be vacating my body pretty quickly and won’t be keeping me down for too long! In the meantime, my cats certainly don’t mind a day in bed partaking in all the cuddles. Plus, if I didn’t stay home sick today, who knows how long it would have been until I updated my blog!