It Takes a Village to Raise a Roof

Posted on September 14, 2017 by agirlandhercommander 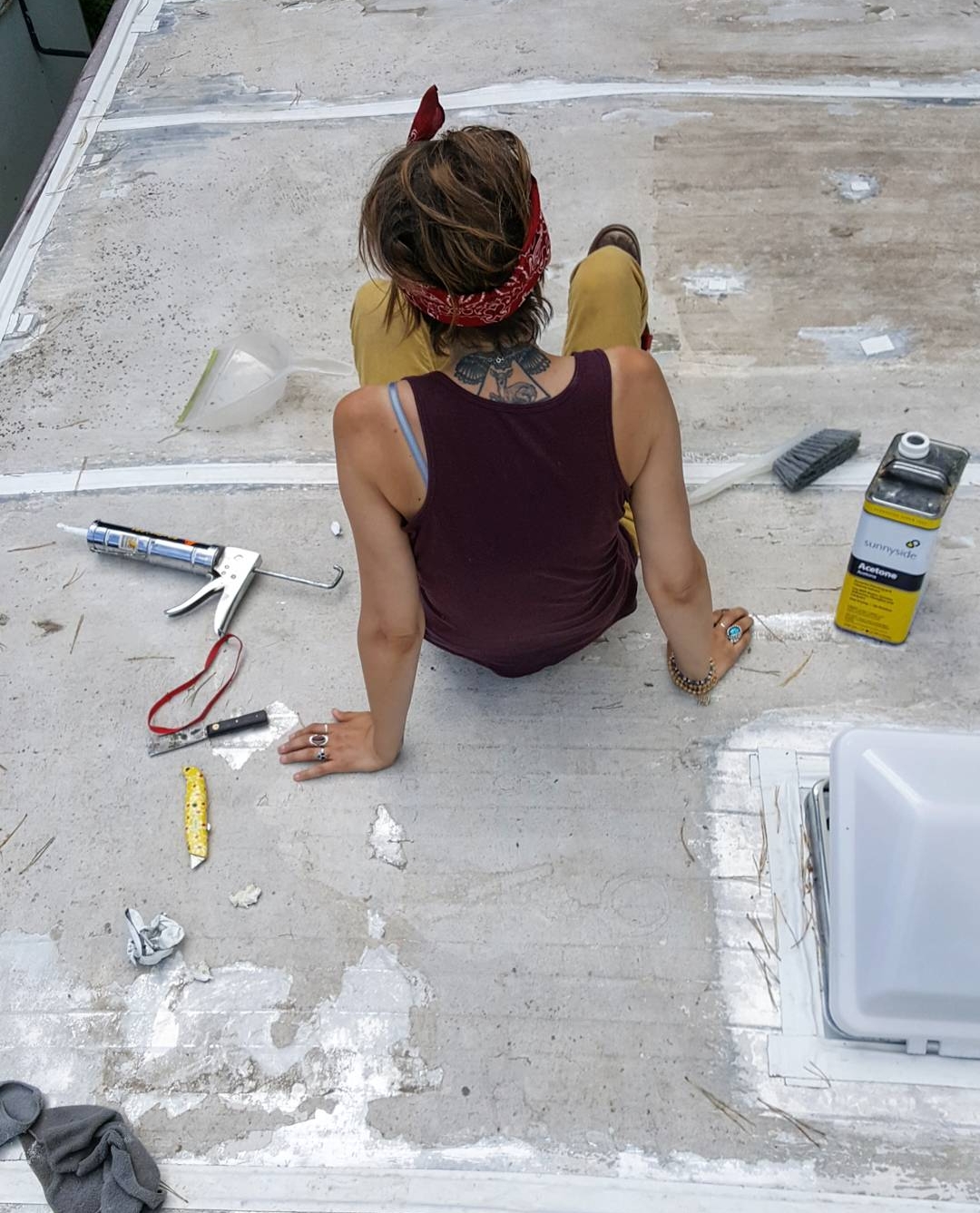 One year, 26 hands, countless hours and $400 later, IT’S FINALLY DONE! Well….as done as a motorhome’s roof can be done. I will probably be crawling up there for the rest of Mander’s life chasing leaks and doing maintenance. But anything I do from now on will feel like child’s play compared to what I’ve been through with this roof.

Let’s rewind to July 2016. I had just purchased Mander and was on my way to work on her for the first time. I was armed with a new skylight, Eternabond, Kool Seal and a whole heap of sweet, blissful ignorance. I had it in my head that I was going to redo the roof, by myself, in 3 days. I can’t tell you how much this cracks me up now. I can’t even type that without laughing out loud.

Needless to say, I did not accomplish what I set out to do but I did get that skylight replaced! It only took me 3 days to scrape down to the raw aluminum.

I got it down to the raw aluminum!

That was about as far as I got in 2016. There was a lot of moisture trapped inside Mander so it was decided to tarp her until I rebuilt the waterlogged ceiling and walls. I would repair the roof once she was dried out and I had more time to commit to the project. Doing that little skylight area also made it clear that I may need to recruit some help.

Now we can fast forward to May 2017. Things had been rebuilt, the tarp was off and I had a roofing crew! We spent 3 days, read about it here, doing our best to get the roof watertight. I am sad to report that did not happen. It took one heavy rain to find out a lot of the Eternabond had failed, in a big way.

Eternabond works great for smooth, flat surfaces. It DOES NOT work applying it to anything that has ridges or bends. This was the toughest lesson I learned. I made a huge mistake applying it to the tracks that run the length of Mander. The Eternabond had to go from flat, up a side, over a track and then bend over the edge of that. It was such a fail. There were places that didn’t adhere everywhere. I had to cut it away and reseal all the track seams. 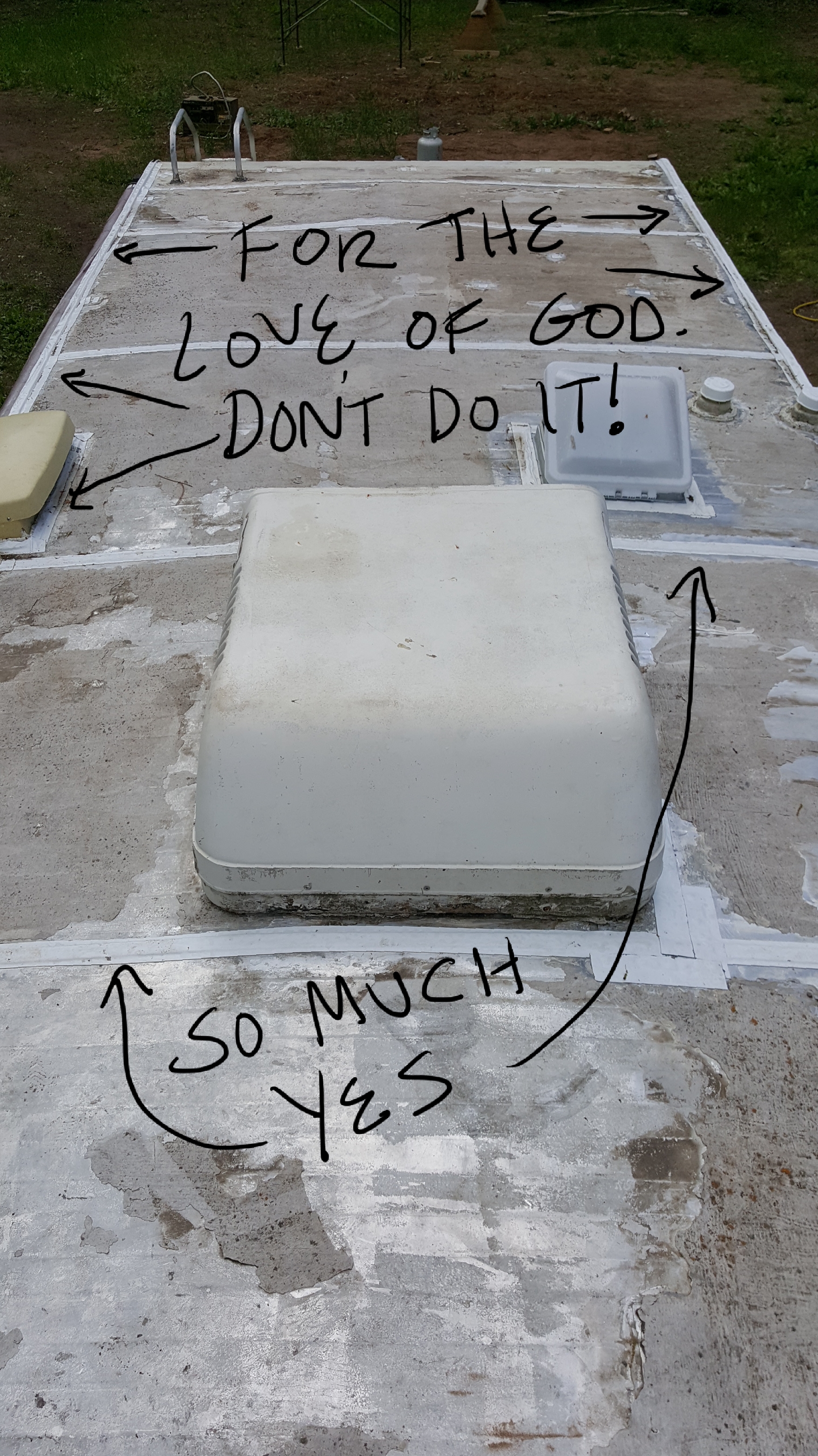 The next lesson I learned was that because of the UV/weather resistant backing on the Eternabond, nothing would adhere to the top of it. It took me wasting a tube of Sikaflex to find that out. That meant I had to cut and peel enough of the Eternabond away that it wouldn’t interfere with the new products I was putting down. As the name suggests, it does not come up easily. While I was in the throws of this nightmare, I learned Eternabond makes a fabric backed tape that you can put whatever product you want over the top of it, no problemo. Ugh, talk about salt in the wound.

I was trying a lot of different roof caulking type products and I ended up using Flex Shot the most. It was readily available at Menards and comes in an AWESOME no fuss tube. You don’t have to kill your hands with a caulk gun. You just cut the tip, press it at an angle and it comes out as easy as frosting a cake. I tried 2 kinds of Sikaflex. One self leveling and the other regular sealant. I liked them both but they were more difficult to acquire. Ain’t nobody got time to wait for shipping when your roof is leaking!

Now that you know what a mess I made of the seams, let’s talk about the rest of the roof. Mander was covered in 39 years of baked on roof coating. All layers, a different composition.  The first layer was a bit rubbery, which prevented the use of any sort of wire brush or sander. After experimenting with different techniques, it was clear that good ole fashioned elbow grease and a chisel was what was gonna get the job done. So it began, countless hours of scraping. I wasn’t going for raw aluminum everywhere but the stuff that wasn’t adhered very well needed to come off. I sure as hell wasn’t gonna paint on another coating and not have it stick. This is where all the extra hands came in. If I didn’t have all those wonderful friends and family helping me, I would be up there scraping until all that was left of my hands were nubs.

Here’s all my kick ass scrapers!

Thank you for all your hard labor Andy, Becca, Jamie, Paul, Krista, Mom, Trin, Brent, Tiffany, Melanie and Kendra (Not pictured removing some stubborn silicone)! You all made a very tedious job way more fun. After what felt like 6 bajillion hours of scraping Mander, I was ready to apply the Kool Seal. Kool Seal is a elastomeric heat resistant barrier that will protect my aluminum from aging. It also keeps it cool inside and seals all the little pinholes Mander has in her. I did a test patch to make sure we had scraped enough for it to stick. 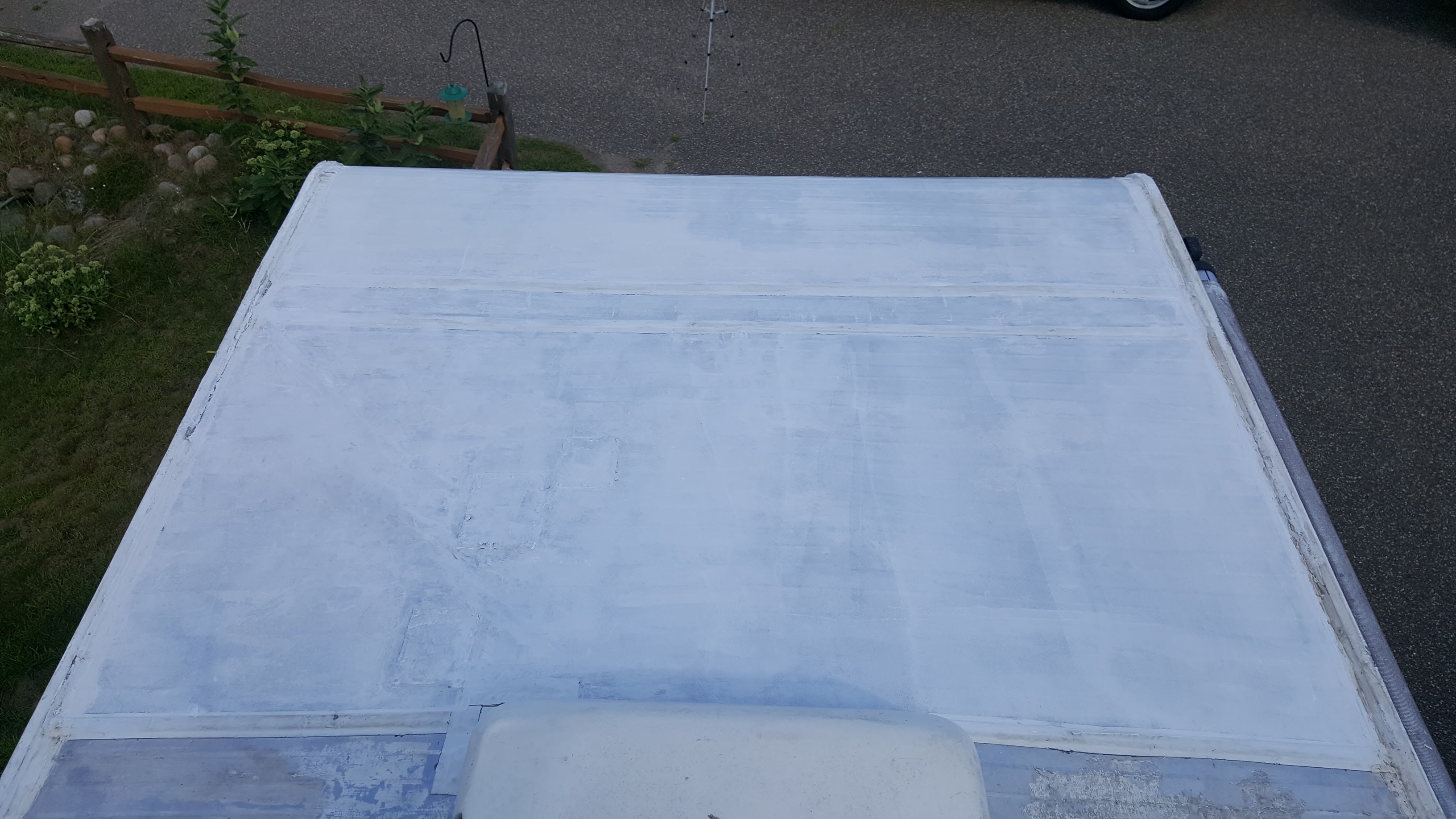 It looked good so I scrubbed the rest of Mander and layered on that Kool Seal! I didn’t have a pressure washer so my hands and arms had to provide the pressure. 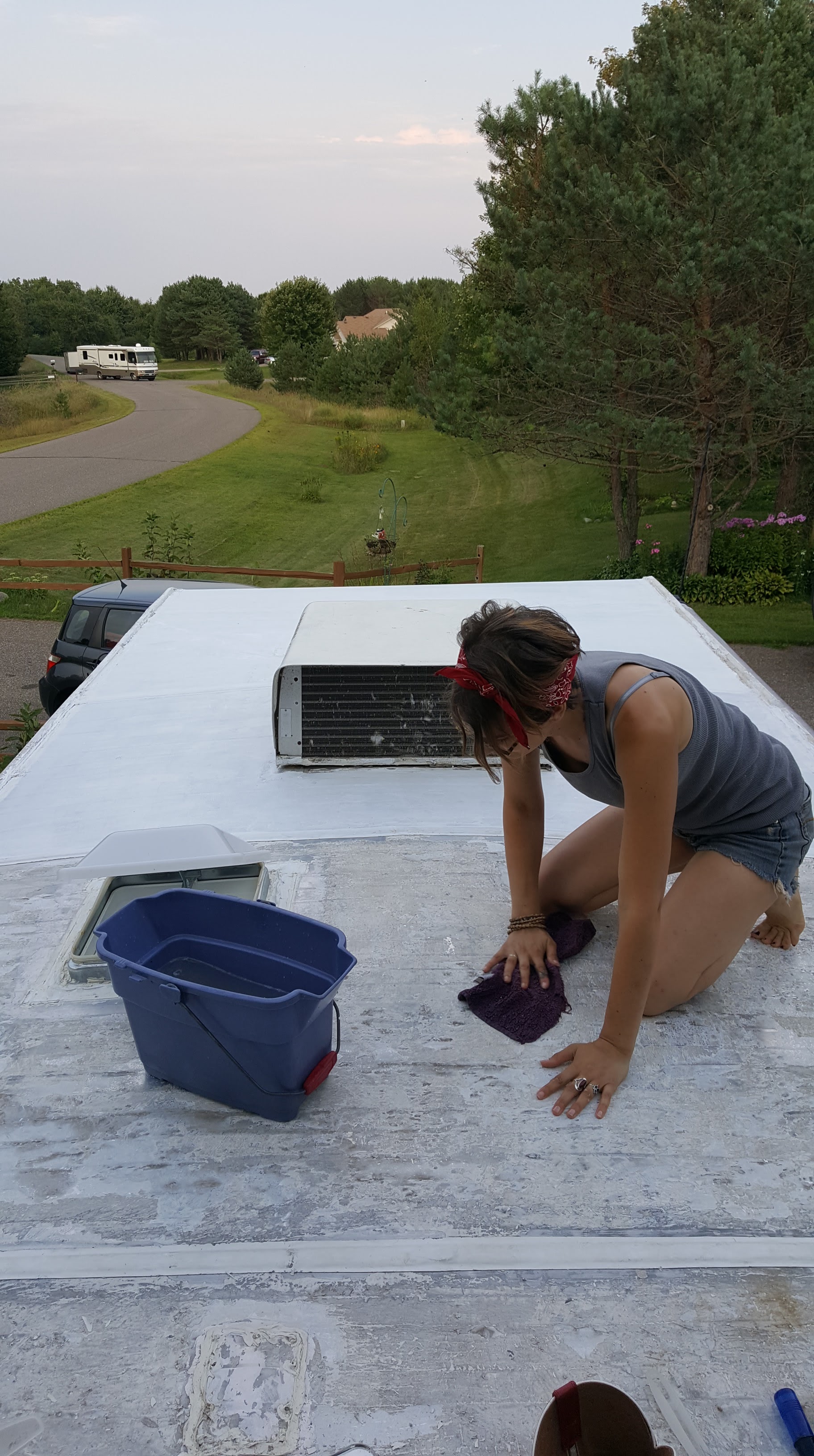 Painting on layers of Kool seal took weeks. You need perfect weather and 24 hours of drying time in between layers. After what seemed like an eternity, it was finally done. I hope you can now look at these before and after photos with a deeper appreciation. I know every person that had a part in this roof restoration, can better understand what it took to make that roof white. 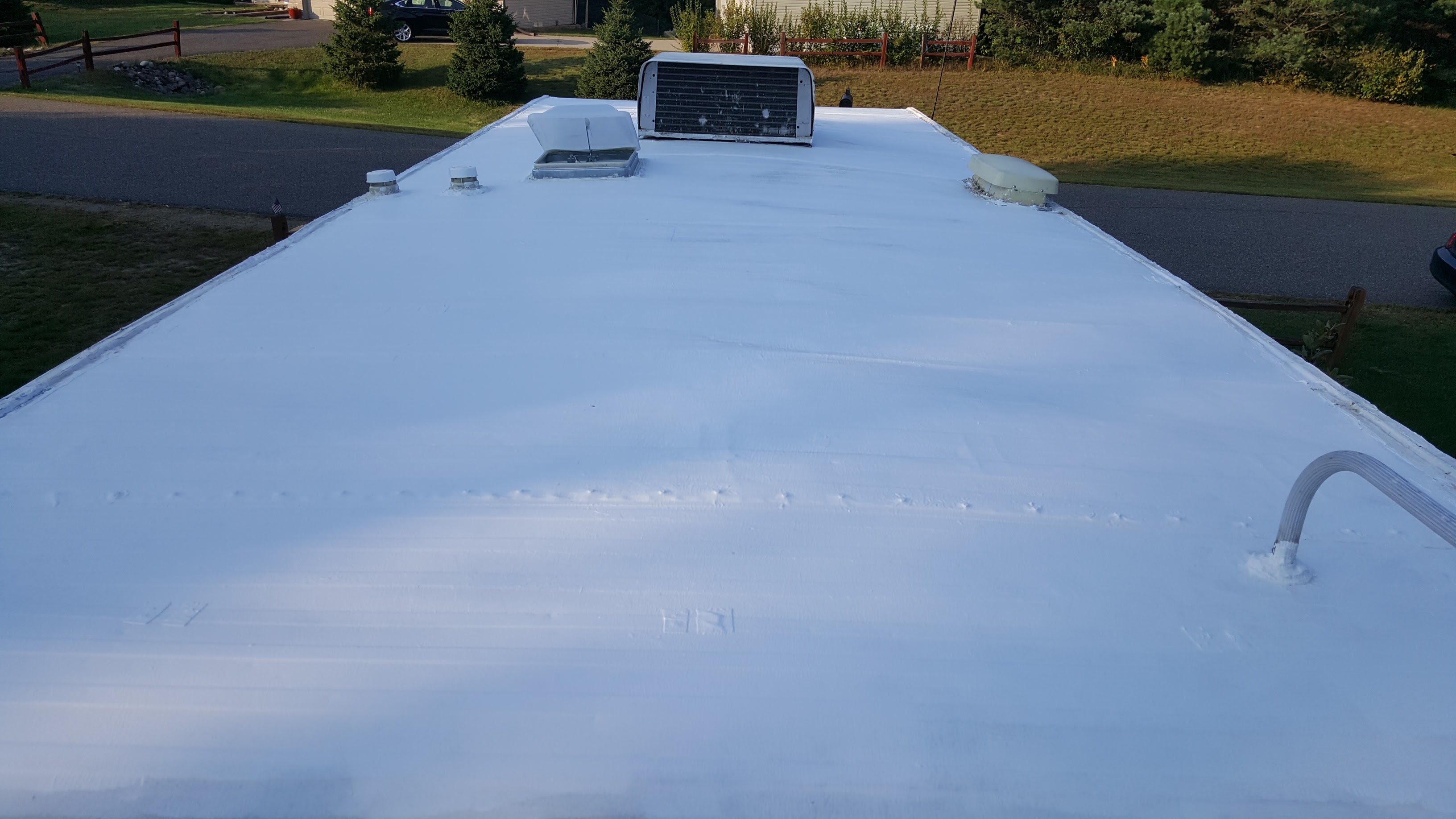 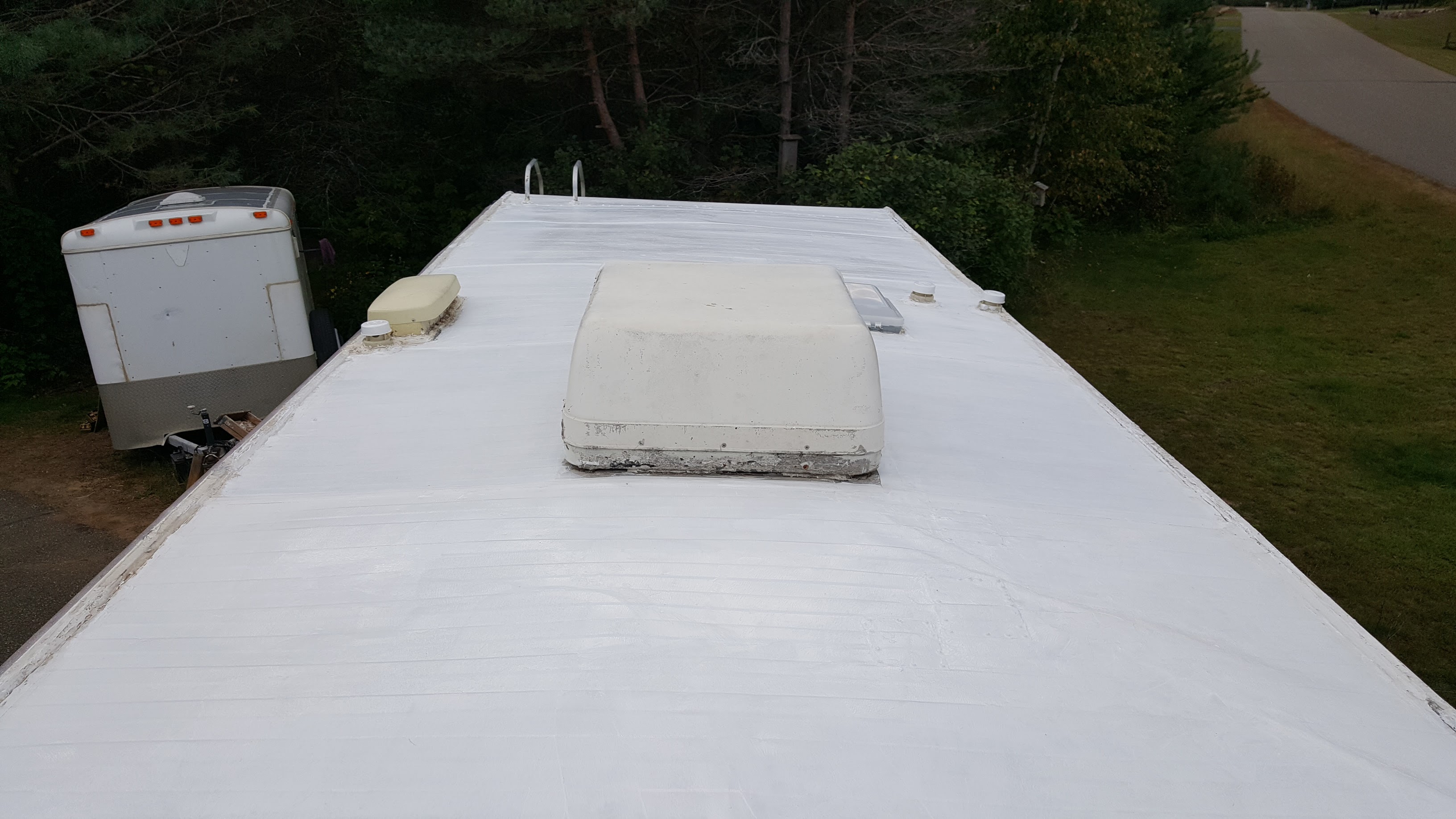 If I knew then, what I know now, I would have found out how much a professional charges to put on a rubber roof. At this point, I don’t want to know. I am going to pretend that it would cost 1 million dollars so I don’t feel too bad about my roof flubs. During all this doing and redoing, I kept telling myself, “It’s a roof. A lot of time and money goes into any house’s roof. No big deal.” It’s still too early to say if the new products I put on will stand the test of time, but it sure feels good to be “done” with it. Worst case scenario, everything fails and I drive Mander’s leaky ass to the desert. I could live with that.

← I Burned Out
Gone With the Wind →

6 Comments on “It Takes a Village to Raise a Roof”