Oh man did I let this blog fall to the wayside! My apologies! Once I quit my job in September I hit Mander hard with all the mandering that needed to be mandered. Oct 1st was my deadline to move by and there were some pretty major things I needed to finish before then. That meant I had no time for anything but construction. I was collapsing into bed every night with not an ounce of energy left in me. So now that you’ve heard my excuse, do you forgive me? I promise, I’ll try not to let it happen again.  Let’s catch up!

I know there is still a lot to report on the renovation, and I will eventually go back and cover it, but I would much rather tell you about life on the road! I hit the road October 24th, on possibly the windiest day in all of human history.  The plan was to drive to my Mom’s in Maple Grove to say goodbye and then keep heading south to visit my friends in Blue Earth. They just had a baby that I couldn’t wait to hold, and I think they both were excited to meet my Mander baby. The wind was not a part of the plan and it was going to do its damnedest to try and stop me.

First I had to say some goodbyes. Some not so easy goodbyes. Kim and Tom had been such an integral part of my Mander dream. I never would have guessed it because I didn’t even know them when I dreamed this dream. They made everything easier and happier and safe. They gave me a place to park my dream, tools to build it with and the emotional support to keep going when I felt stuck. The gratitude I have for these people go beyond words. Saying goodbye to them felt like I was becoming untethered from my rock. The only solid ground I had left. I wasn’t sure I was ready to let go but it was as good of time as any to try. Saying goodbye to my Mama wasn’t easy either. I soothed myself with knowing that I talked to her on the phone pretty much daily and that probably wouldn’t change. Plus, I made her and my sister promise to come visit for Mother’s day in lieu of our annual yurt camping trip. With wet eyes, I finally set out…to get some gas.

I pulled into a gas station and started the long process of feeding Mander her gas. To my surprise, someone I would have never expected to see comes strolling up! My friend, Chris, just happened to be on a job site in the area and swung up to the gas station to get a drink. It was too happy of a coincedence to be a sad goodbye. After I racked up a million dollar gas bill, I was officially ready to get this show on the road! Ready or not, new life here I come! 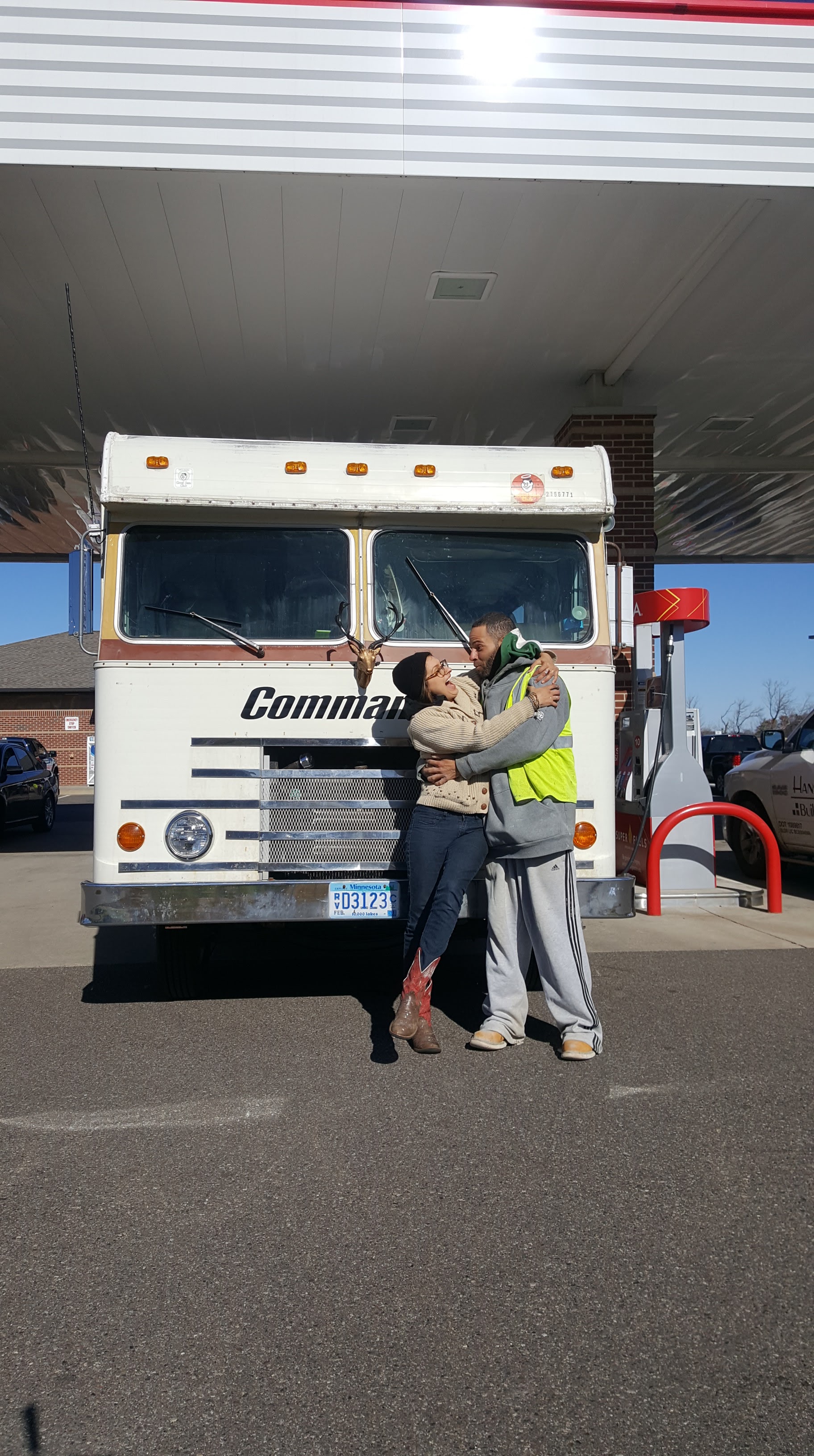 I was greeted by 30 mph hour gusts of wind which were better suited for a new life flying kites than driving a Mander.  As you may have noticed, Mander has a very large awning running the length of her on one side. Now, I didn’t even know this was possible, but the wind was so strong it would grab the locked arms of the awning, yank them away from Mander, and with what little play there was, start to unspool the awning fabric. Then, with its grabby little wind hands, it would start yanking the fabric out more and more until Mander had a sail flapping all over the dang place. That sounds like it would mostly be funny but it wasn’t. It was like, zero amount funny and 100% high octane stress. The awning fabric would be fiercely whacking the roof and windows and I would have no choice but to keep driving because there wasn’t always a place to pull over.

This happened not once, not twice, but five freaking times! I would drive for a little bit, battling strong gusts of wind, fighting to keep a giant box on the road, and then eventually the wind would have its way with my awning and I would start searching for a place to pull over. I bet you can guess how difficult it can be to pull out and re-roll a 24 foot awning in 30 mph winds. The best I could do was look for a place that would provide a wind break. First up, the Church of Christ!

Of course, the one guy that was there came outside to find out what in the heck a Mander was doing in his parking lot. I was like, “I’m so sorry but the wind is ripping my awning out and can I pretty please use your church as a wind break while I try to sort this out?” and he was like, “Yeah. Let me grab a ladder.” It was clear we needed saving.

On top of the fabric getting pulled out and tangled up, one of the arms would also get jammed, so it was helpful to have another set of hands. This kind soul helped me loosen everything, roll it back up again and I was on my way! Not 5 minutes down the road…..it happened again! Loosen, re-roll, drive, stress out, wait for it to happen again, repeat. I made it to the coop in St. Peter and I had just about had enough. I didn’t think I could go on. My nerves were shot and the last awning rip-out was a doozy. The brace arm in the middle had come away and was no longer holding the awning and the fabric was twisted and flipped in all kinds of crazy ways. I went in to have lunch and see if they would mind if I stayed the night in their parking lot. I walked out with a ladder and determination to fix the stupid thing, again, and continue on.

I talked to my Uncle Buster and he told me that if I could find a way to reinforce the arms from flexing at all, I might solve my problem. So I climbed up on that ladder, hoisted the awning back into the brace, untwisted everything, rolled it back up and tied the arms with some twine. I felt good enough to go on, so I set out on the last 60 miles to Blue Earth.

As I was driving the windy country roads, the wind had to show me one last time what it was made of. Riiiiiiiiiiippppppppp! Thwwaack thwack smack thwwwack! I pulled over without a wind break in sight. I was pissed. I grabbed my duct tape because….if you cant duct it, fuck it! I marched out there, on the side of the road, in the middle of corn fields, wind whipping, cold air cutting me to the bone, re-rolled it and duct taped the arms of that mother effer. Sure enough, it worked! I made it the rest of the way to Blue Earth without another incident. I had a nice visit with my friends, Brooke and Matt, and got all my baby holding cravings out on their sweet boy, Victor.

The next day Brooke and I went to go take some fun pictures with the Jolly Green Giant, the only appropriate way to say goodbye to MN.

Then, I got to meet Brooke’s longtime bestie and co-creator of their blog, Makie! I was featured on their blog after I first bought Mander, so it was great to be able to show them the fruits of my labor. (Give the article a read here, if you haven’t already!)

After more goodbyes and lots of well wishes, I fired up Mander. Her awning was damn near destroyed but the wind had died and I sailed smoothly across the border into Iowa. Little did I know my hazing had just begun. Silly me thought that maybe after a year and 3 months of grueling work and overwhelming learning curves, things were going to get easier. I was very, very wrong. But until I found out otherwise, I was happy.

7 response to "Gone With the Wind"