Burps, Bumps and a Blowout

Posted on December 26, 2017 by agirlandhercommander 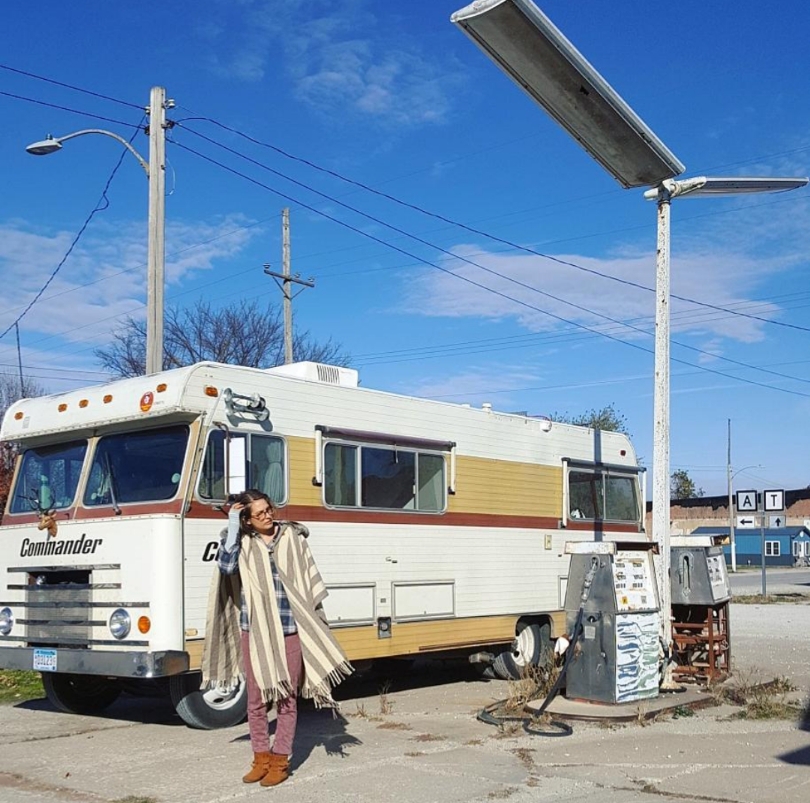 After I left the Smith’s in Des Moines, Iowa, I drove until I reached a casino parking lot. I didn’t want to push it too hard since I didn’t yet know if the repairs Sky and I made were going to stick. I woke up the next morning feeling recharged and ready to make decent headway. I started Mander and geared up to make my way to Kansas City.

Before I start driving, I shut off the propane tank mounted under Mander. I hopped out to do just that, and noticed something that didn’t seem quite right. Exhaust was coming out from the front of Mander….yeah definitely not right. 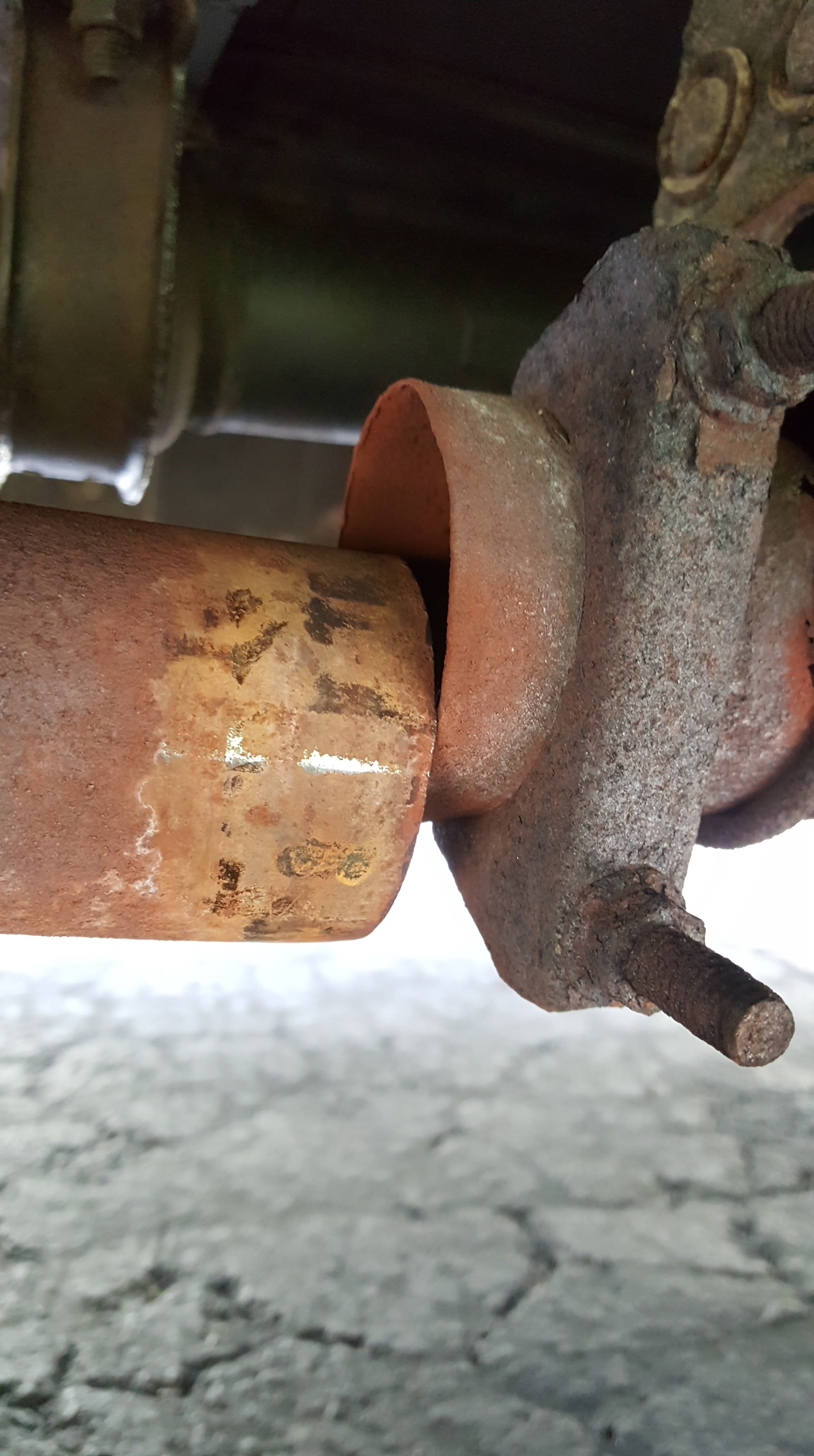 Oh boy. I had barely started my day and I was already stepping into my coveralls.  I crawled under there to assess the situation. There was no way any of those nuts were going to spin off, so I did my best to shove the parts back together. I knew it wasn’t going to stay but I had no alternative than to Mander on. I said eff it, peeled off my coveralls, put my butt in that driver’s seat and hit the highway.

Then it happened. My first blip of hysteria. I was cruising along at the slow and steady pace of 55 mph and out of nowhere, laughter started to bubble up. The laughter then made a seamless transition into crying. I sobbed for mere moments and everything ended just as fast as it started. I was simply a bystander in my body’s emotional burp. It was a good thing I had this unexpected cathartic moment because I was about to hit another bump in the road.

I smelled burning rubber. Don’t ask me how I could smell burning rubber over the burning oil and exhaust that was in the cab, but I could. The simple answer is that I have a super smeller. Nothing felt obviously wrong with Mander, but I was worried enough to get off the highway and check. I exited and drove to the closest town to inspect things. I climbed out of Mander and started poking around. I checked the tires and sure enough, one of my dually tires had basically fallen apart. 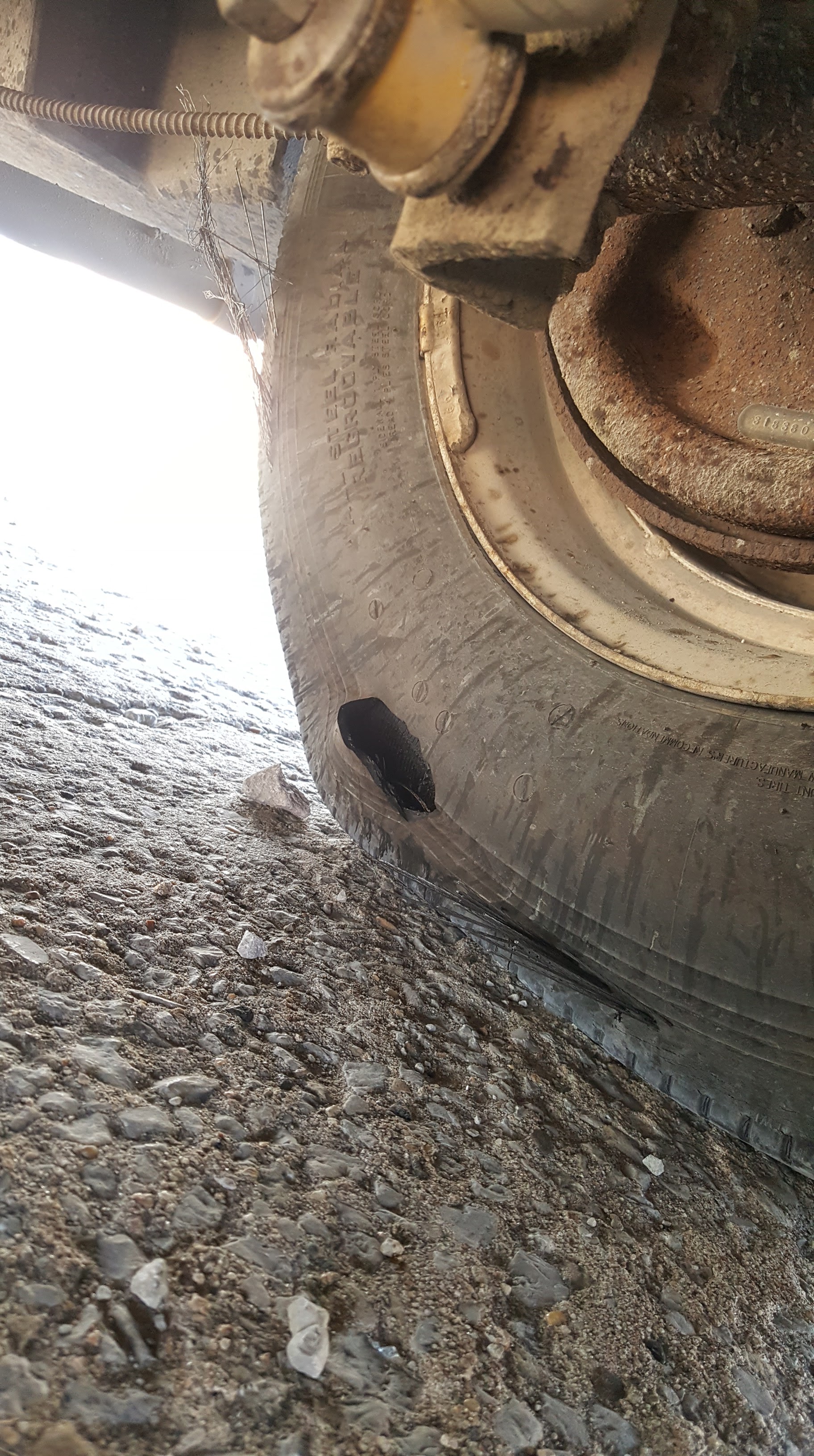 I was in a mostly deserted, small town with a flat tire but I felt surprisingly ok about it. I had Good Sam roadside assistance! In fact, I felt a bit good about getting to use it. I called them up and they dispatched someone in the area to come change my tire. I am a independent, DIY type girl but I also have no problem stepping aside from time to time. Mander’s tires are wicked heavy and changing an inside dually is not a fun task. I was more than happy to let someone else do the job.

Once the spare was on, I made some lunch, put everything back in my trunk and loaded my scooter up. A kind soul on Instagram, John, knew I was headed his direction and told me I was welcome to use his place and tools as a refuge if need be. I reached out to him to see if I could have a new tire shipped to his address. I couldn’t very well drive around without a spare.

I had previously ordered my front tires off of Amazon Prime and told John I could have a new one in no time. He agreed, so I got online to order one….but they didn’t have any. Like at all. Ever again. I searched and searched and I could only find a couple remaining places that are distributing my weird sized tires. The fastest shipping would take a week. I let John know the situation and he thought it would be wise to check around Kansas City for a new tire. It was sunday and nothing was going to ship out that day anyway. Although I was skeptical I would find any borderline obsolete tires in a shop, I thought his plan made good sound sense. He invited me to stay in his driveway while I figured it out and I had just enough time in the day to make it there before dark.

The decision was made. I pointed Mander in the direction of another loving stranger’s house. I just had to get there without blowing another tire, which now seemed like all too real of a possibility. At least I had the exhaust fumes to mildly sedate me during the worrisome drive!

10 Comments on “Burps, Bumps and a Blowout”