Posted on January 19, 2018 by agirlandhercommander 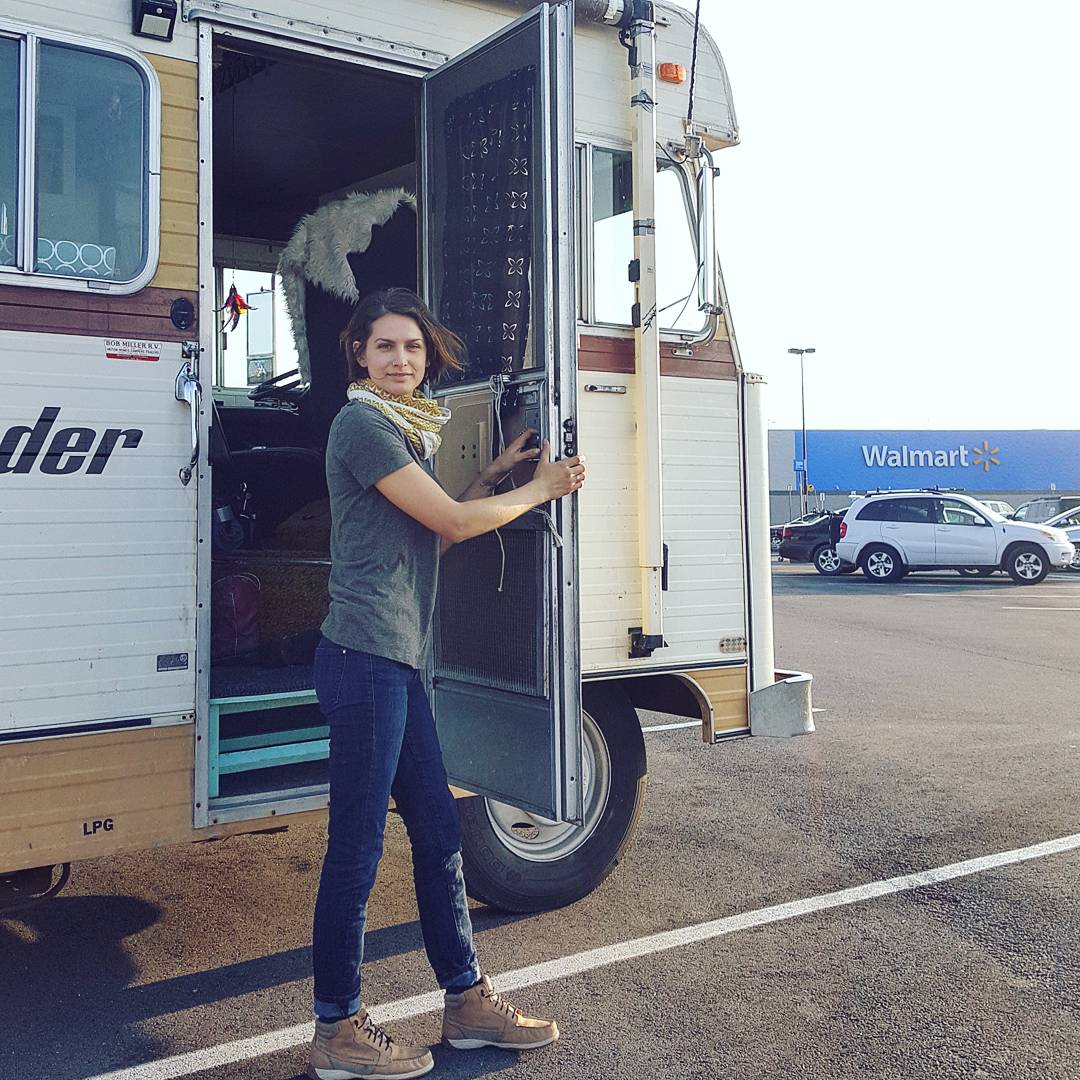 My first night back on the road happened to be Halloween night and I spent it at a truck stop in a town called Peculiar. It had all the makings for the beginning of a horror movie but thank goodness, nobody showed up at my door with a butcher knife.

I had been talking with my Uncle Buster about meeting up on the road to do some Mander maintenance. Buster is a trucker and has to take periodic breaks off the clock to “hour up” so we planned to meet during one of those times. If I didn’t go any further south, his route would cross with mine. So we picked a Wal-Mart in Nevada, MO that had some automotive stores nearby and welcomed RV’s and Truckers. I got there before him so I had to spend a couple nights with nothing to do but relax. After all the mechanical drama, I was more than ready to do just that.

Buster arrived and we had a nice spaghetti meal together in my new home. It was the first time I got to show him Mander completed and moved into! It was such a neat experience to be able to cook a meal for my Uncle in a Wal-Mart parking lot, in a town I had never been in. We visited for a while and went to sleep with full bellies, ready to kick some Mander butt in the morning.

The repair that Sky and I had done to the transmission line wasn’t holding up. I had been keeping an eye on it and noticed that the line had started leaking again. I decided I would probably need to replace that section of line and had purchased it in advance. So Buster and I got to work pulling the old one off and feeding a new one on. Luckily I had purchased enough line to do the one next to it too. Judging by the looks of it, it was only a matter of time before it started leaking as well. Done!

Next up, figure out why the hell I was leaking so much oil. Buster started checking the oil pan bolts and, sure enough, some of them were loose! He tightened them up and we hoped that helped control some of the leak.

Next up….electrical. DUN DUN DUNNNNNN. There is a back story here that needs to be told for you to fully understand the “DUN DUN DUNNNNN”. Before I left, there were countless hours and $400+ spent on trying to get my lights to work. My tail lights, blinkers and brake lights were not working consistently. I had recruited my partner, Jeffrey, to help me try to get everything working properly. He’s better at the meticulous and illusive type projects and has way more patience for it than me. He started by cleaning all the connections and grounds. Then the 4 day whack-a-mole game began and let’s be honest, nobody wants to play whack-a-mole for that long. We would get one thing working right and then something else would break. Then we’d fix that and the thing that was working before would stop working. Then we’d fix that and everything would stop working. You get the picture. Hair pulling to say the least.

We gave up and I decided that I would treat myself to having an expert fix it. For the first time I was going to hand over Mander to a stranger and pay money to have a repair made. I was living in Mander by this time so I had to move myself and the kitties into Kim’s spare room. It wasn’t a great feeling to leave my house at a repair shop but I was very grateful I had a place to stay where my cats were welcome. It would have been much worse if I was forced to stay in Mander at the repair shop or fork over even more money for a hotel.

Unfortunately, the shop I brought Mander to was not a great place. I had an A.M. appointment and they didn’t even look at it until an hour before they closed. When they finally “worked” on it the next day they told me it was the turn signal cam that was bad and needed to be replaced. Jeffrey and I had already replaced that but they assured me that they were junky parts and probably just failed again. They offered to order the part and keep my house for another night and day or I could pick up the part that night at O’reilly and do it myself. I opted to go get my house. I was suspicious that they knew what they were talking about, but I gave them the benefit of the doubt.

They did not know what they were talking about. Jeffrey and I replaced the turn signal cam, for the third time, and it didn’t work. I was pissed but didn’t feel like dealing with them. I couldn’t handle the negative confrontation and I certainly didn’t want to give them my house again. I was out $300 and right back where I started. Then Mander Magic happened. Or Mom magic…

I wish I could say that was the last of it. Fast forward to leaving the Smith’s in Iowa. I was suspicious that my lights had stopped working again so I asked Sky to check them when I was leaving. Just as I thought, I was down to one blinker. I wasn’t about to start chasing electrical gremlins again when winter was hot on my tail so I said, eff it, and forged ahead.

Which brings us back to Wal-Mart in Nevada, MO. Buster wanted to get all my lights working, I agreed it would be better if they worked but I was super reluctant to tear into it. I had already spent $400+ and endured hours and hours of trying to remedy this situation. I had laid on my back slithering the length of Mander chasing wires, contorted myself into a human pretzel to poke around under the dash and pulled off the steering wheel to get to the inner workings more times than I could count. I was so. Over. It. But I would be a fool to say no to someone that was eager to help and hadn’t yet been completely pulverized by Mander’s electrical gremlins. I agreed, the steering wheel came off and Buster went into the ring swinging…

← Tire Town, Day Two
Down For the Count →

3 Comments on “Parking Lot Meet Up”