Posted on February 18, 2018 by agirlandhercommander 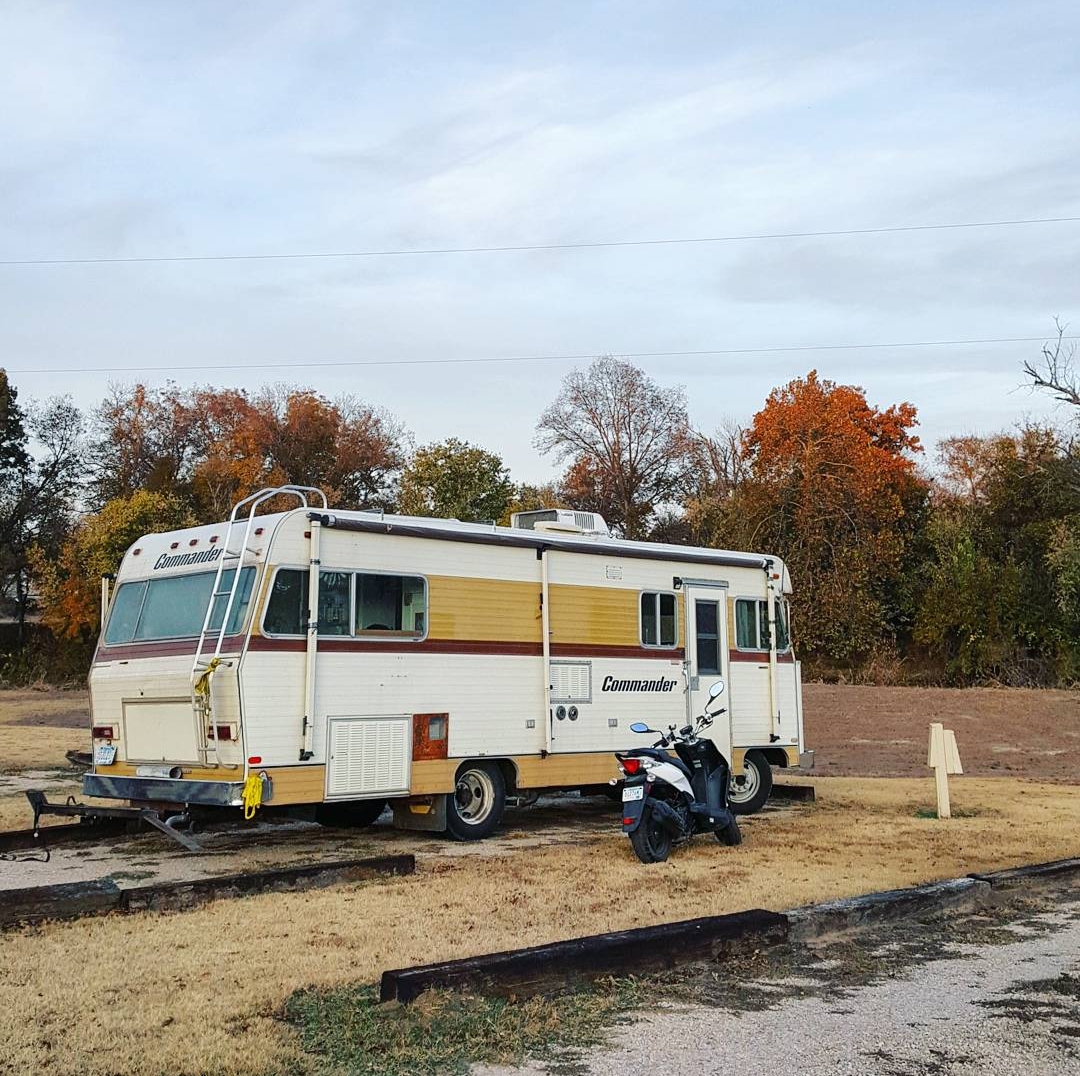 After surfacing from the Ozarks, I relished in the predictability of the Wal-Mart parking lot for a night. I rested up and thought maybe it was time to address Mander’s starting issues. Buster and I thought it was the starting solenoid so I decided to track one down.

I called around and found an O’reilly that was in my route and carried the part. I set out the next day to collect it and continue my journey west to Oklahoma. I wasn’t eager to install it but it was reassuring to know I had it in case Mander threw in the towel and said, “No more starts.”

I stayed in truck stops, Wal-Marts and rest stops as I worked my way through Oklahoma. Every time Mander started, I breathed a huge sigh of relief. There were times I left her running because it wasn’t a good place to break down. I was always anticipating the worst but would celebrate every time her engine roared to life. I pulled into a truck stop in Ardmore and was planning on taking a shower and spending the night there. As soon as I arrived, I knew right away there was no way I would stay. The way it was set up created a merry-go-round of semi’s right through the whole truck stop. It was loud as hell and after night after night of sleeping next to idling semi’s, I was over it. I took a shower and hopped on freecampsites.net to see if there were any free spots around. I didn’t find any free ones but I did find a city park in Tishomingo, OK that accommodated RV’s for $5 a night. I have a general rule that I try to abide by to keep costs down on the road; don’t pay to park. Considering my options, I decided I could break my rule. It was only $5 after all.

I rolled in to Tishomingo and  got set up in my parking spot. The peace and quiet enveloped me. It was so good I decided right then and there, to stay more than one night. I had been in a bit of a hurry to escape freezing temps and I was finally in a place where the forecast wasn’t looking too shabby. I deserved to kick back for a couple days! I had a restful nights sleep and the next day unloaded my scoot to run some errands and explore this little town. 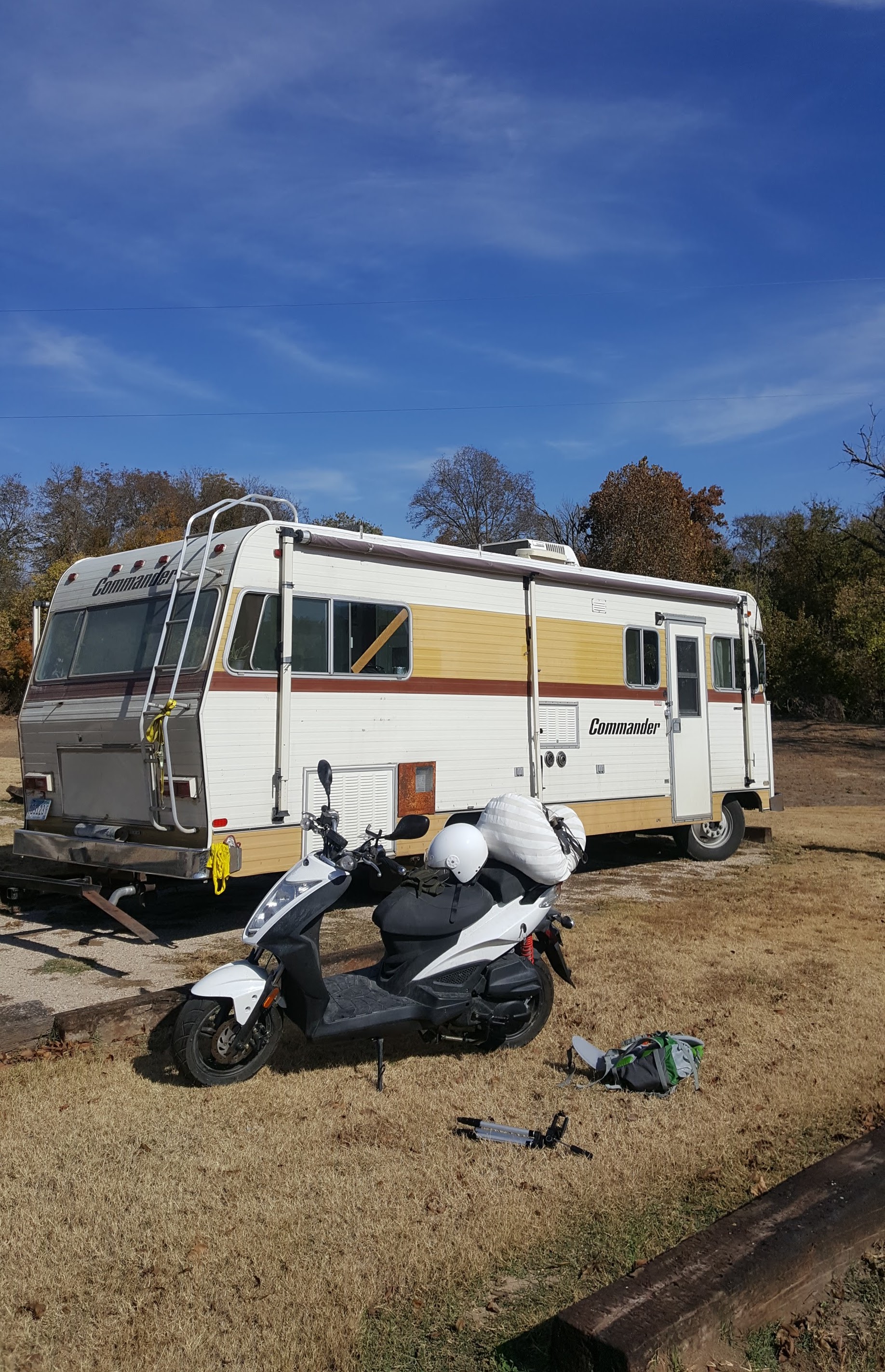 First rule of order, laundry! I ratchet strapped my bag of laundry to my scoot and headed to the local laundromat.

What an experience that was! It was like entering a place frozen in time since all the machines were from the 50’s. At the same time, it felt like urban exploring because the building had clearly been abandoned and left to rot. After I got everything washed in the nastiest laundromat known to mankind, I was ready to scoot around town. This was the first time I really got to appreciate how handy having a scooter was!

I went to Tishomingo National Wildlife Refuge and saw my very first armadillo! It was rummaging around for food mere feet from me. I watched it quietly for some time then decided to move on. As soon as I started to move again, I must have spooked it because it jumped straight up in the air! Later, I was researching armadillos and read that there are only two species of armadillos that curl into a ball when scared. The rest of them jump! That is why you see so many of them as roadkill. They jump straight up into the under body of vehicles.

After spending a couple days poking around Blake Shelton’s hometown, I was ready to be on my way. I decided to do some Mander maintenance before I hit the road since I had a safe place to do it. I crawled around under Mander greasing all the zerk fittings I could find, topped off my oil and checked my brake fluid. The whole time I kept telling myself, “Jessy, replace that damn starting solenoid.” “You’ll be happy when you finally get that done!” “One less thing you’ll have to worry about. Just doooooo iiiiit!”

It took some convincing but I finally mustered up the energy to do it. I disconnected the battery and then disconnected all the wires that were attached to the solenoid. I put the new one on and hooked everything back up. I was so excited to jump in that driver’s seat and find out how awesome Mander was gonna start now! I turned the key and…….nothing. That can’t be right. I checked all my connections and everything was just as it should be. Is it possible I had received a bad solenoid? The only way to find out was to put the old one back on again. Ugh. I swapped them out and I got a couple very lame attempts at turning over then nothing. Well, when your Mander won’t start, who ya gonna call? Uncle Buster!

Buster is the best at knowing ways to trouble shoot. He listened to the symptoms and decided we needed to check the starter. In order to check the starter, I had to arc it. If you don’t remember from before I HATE arcing things and dealing with electricity situations in general. Sky wasn’t there this time to jam the screwdriver, so it looked like it was gonna have to be me. Gulp.

I had to reach my arm down past the engine to get to the starter, take the screwdriver and touch the positive and the negative at the same time and if the starter wasn’t bad, it was going to turn over. I swear, it took me five minutes to get enough courage to do it and then I was so scared I had to scream while I went through with it. I touched the positive and negative and there were sparks but no turn over. Buster said, “Your starter is bad.” Great. I went and found the camp host, handed over another $5 because it didn’t look like I would be leaving after all.

← Accidentally Ozarked
Let’s Get it Started →