Let’s Get it Started

Posted on March 8, 2018 by agirlandhercommander 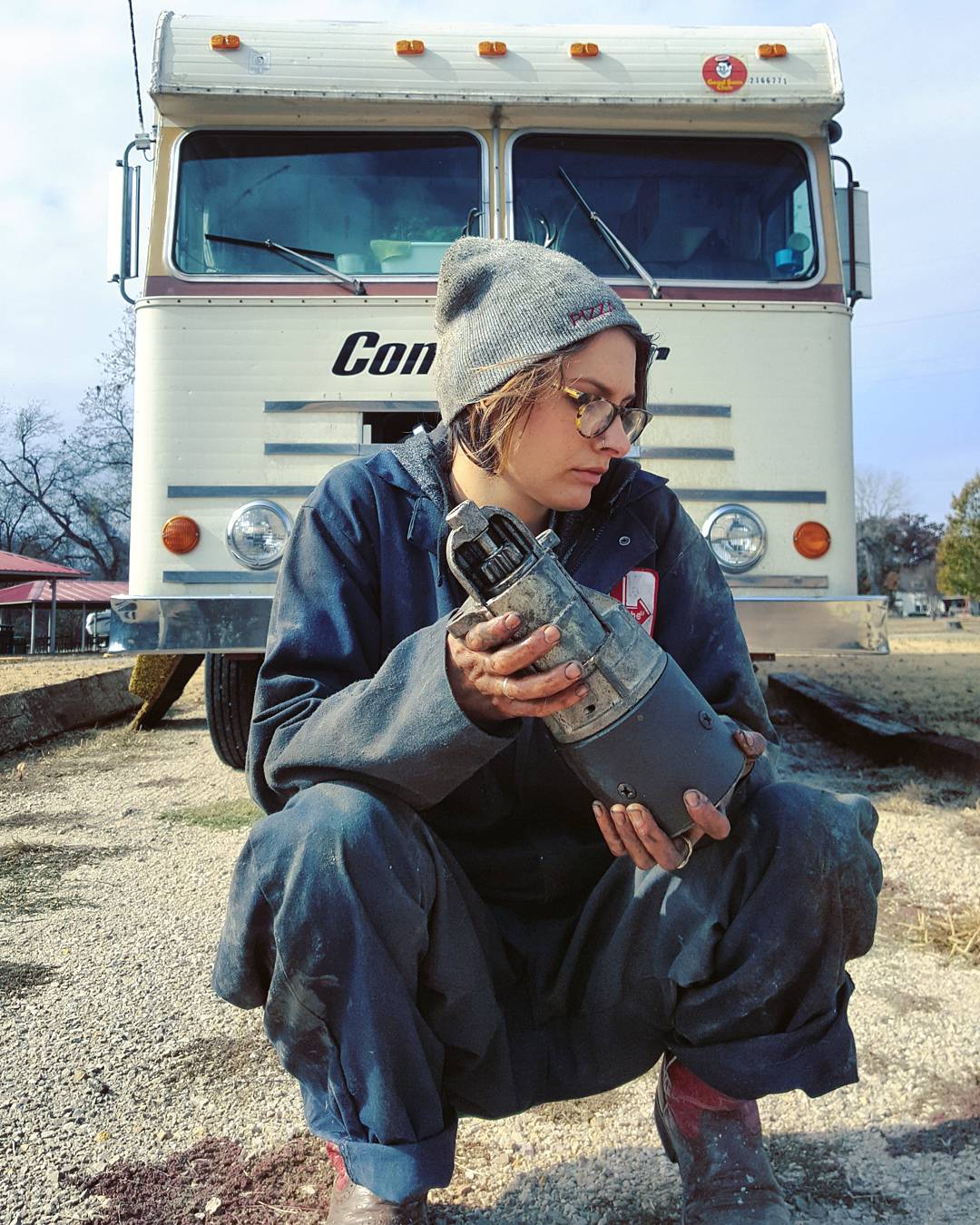 A lot of people say a starter is an easy thing to replace. Two bolts and a couple of nuts to hold on the positive and negative wires. I think those people have more practice working on vehicles than me…and more patience…and better tools…

I would like to preface this story by telling you that I am not a patient person. On top of that, I have struggled with claustrophobia for as long as I can remember. These two traits make working on vehicles an even more challenging experience. I am in complete admiration of anyone that can keep their cool while working on something that involves a lot of trying and struggling in cramped places. To get Mander where she is today, I definitely had to work on my patience (hello giant learning curve) and claustrophobia issues (hello plumbing), but unfortunately, I did not conquer them. What I do have, is stubbornness and determination up the wazoo. Those come in handy when dealing with my shortcomings.

Once Buster had put me through his terrifying trouble shooting and deduced that it was most likely a bad starter, I detached the battery cables, located the bolts and got to work loosing the nuts. Mander’s starter is in a really crappy location that makes it hard to access. I got my wrench on the nut that was easiest to get to and pushed with all my might to crack it loose. It wouldn’t budge. I tried and tried to get that nut to spin but I just wasn’t strong enough. I thought, if I could pull the wrench from the top, maybe from that angle I would be stronger. The only problem was that I couldn’t maneuver the tool into place from the top. So I got the wrench on the nut under Mander, wedged a cloth under it so it was braced on the exhaust pipe and went around to the top. From there, I had to reach down VERY carefully and grab the tool without knocking it off the nut, otherwise I would have to crawl right back under there. I managed to grab the tool, keeping it in place, and pulled with all my might. Nothing. I was starting to feel defeated and think that maybe I’m physically not strong enough to do this. But I had to be. There was no one to help me and having it towed to a shop was not an option in my mind. So I start pulling again with all my might, screaming to be as strong as I could be and then, “pop!”. I did it! It broke loose! One down, one to go.

The other nut was in an even tougher location and there was no choice but to access it from underneath Mander. This nut…oh boy….this nut I tell ya. Who knew one nut could contain the power to almost destroy a person. I had the right sized socket but the nut was so closely butted up against something that there was not enough room for the socket to slide over it. I could get my wrench on it but I could only move the wrench a quarter of a turn before I had to take the tool off and reposition it. Like I said before, the starter is in a really crappy location. There is an exhaust pipe running one direction and the tie rod running the other direction creating an X right under it. Because of these obstacles, my wrench could only be repositoned 2 ways. Luckily, I was able to break it loose easier than the one above but boy did I struggle after that. I lay under Mander, with my arms above my head, twisted and tangled in Mander’s guts to reach that nut and move it a quarter of a turn. I hit my head continuously on the tie rod. My arms ached. I would scream in frustration, be pissed and swearing, cry, take deep breaths, pep talk myself and get my tool back on the nut for another quarter of a turn. My claustrophobia and impatience were running high and I was struggling to keep it together.

I swear, it took me damn near an hour to get those nuts off but I finally did it. If that challenge wasn’t hard enough, I now had to figure out how to free the starter from being trapped under that X. Mander’s starter weighs roughly 15 pounds so holding it above my head and maneuvering it around was pretty tough. I started working it towards a gap a couple feet away, hoping it would slide out from there. I twisted and turned it and finally it was free. I lowered it to my chest and just lay there in the dirt and cried. I can’t even say they were tears of joy. I felt totally beat up and right on the cusp of defeat. After I had regained my arm strength, I wiggled my way out from under Mander with my hard won prize. 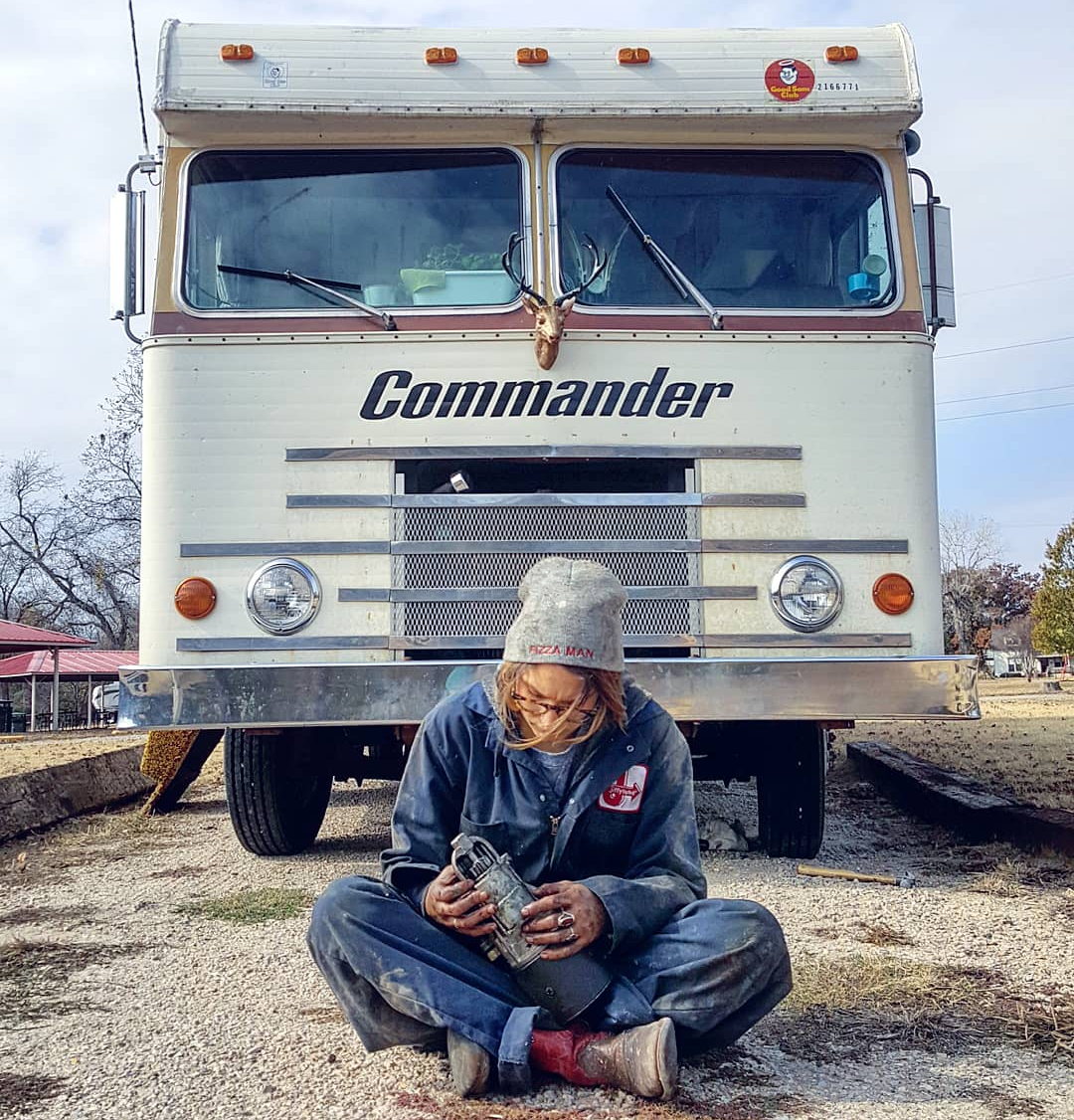 The next step was to bring it to O’reilly to have it tested. I was hoping and praying that it would test bad and they would have a new starter in stock. I loaded the starter onto my bike (so grateful I have a scooter! Can you even imagine having to walk miles carrying a 15lb starter!?) and headed for the nearest O’reilly. I plunked that thing on the counter and said, “I need you to tell me this starter is bad.”. He hauled it off to be tested and I held my breath. When he returned and told me he could confirm it was bad, I just about hugged the guy! What relief! I was overjoyed I hadn’t done all that work for nothing. He kept the good news coming and informed me he had a new starter in stock and it was only gonna cost me $40! My spirits were completely lifted and I was ready for round two. The install… 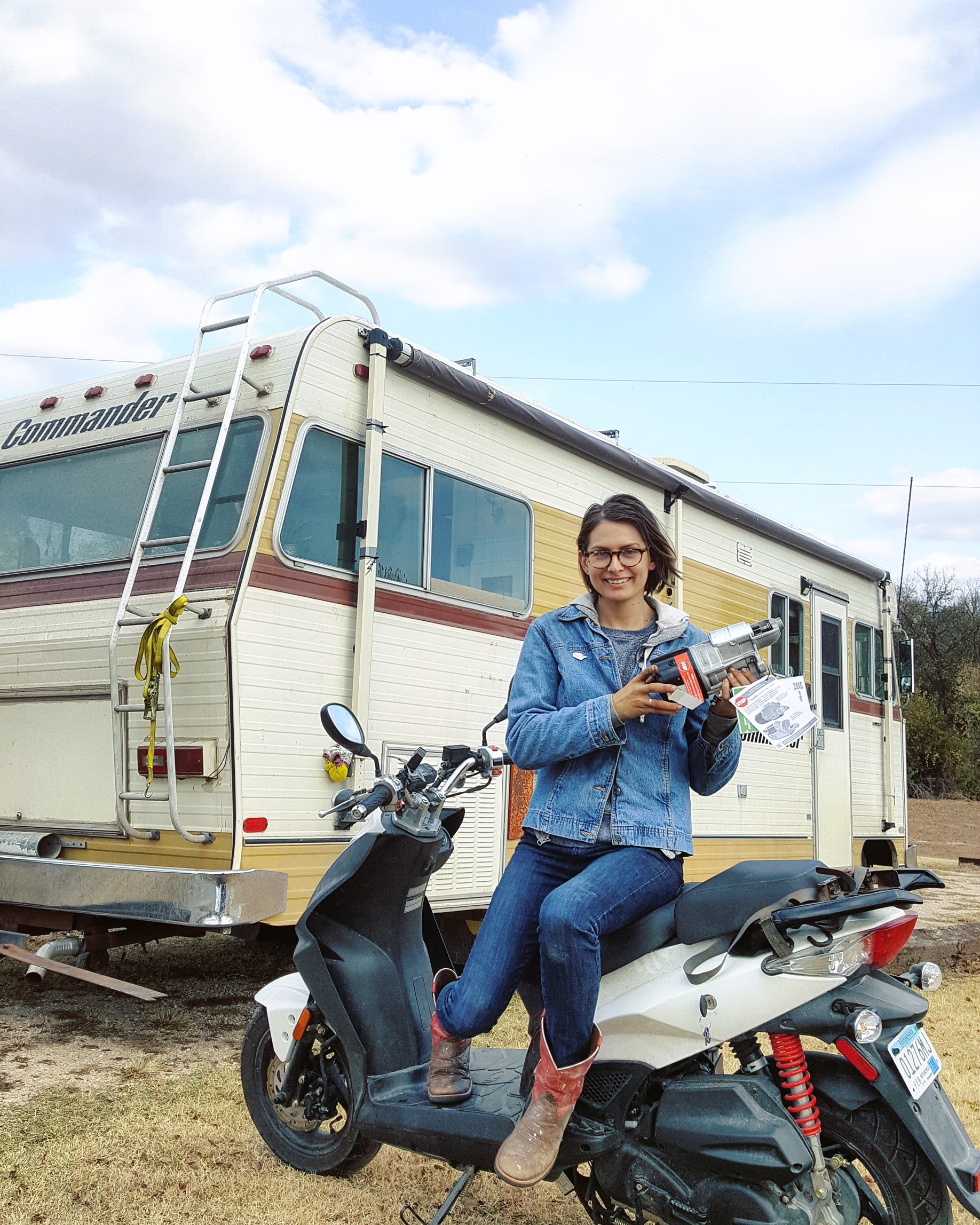 Knowing how I got it out made it easier to put it back in. Except that stupid nut underneath. That was still an insanely long struggle to spin it back on a quarter of a turn at a time. It took me less time to install it, so overall, it went much smoother. I hooked the battery back up and it was time to find out if Mander was going to be receptive to her new part. I turned the key and, oh my, I never knew a starter could sound so good! The thing sounded like it was going to take flight! Mander roared to life and I rejoiced! After spending 4 nights in Tishomingo, I would be leaving in the morning!

Some may say replacing a starter ain’t no thang. To me, it was a huge thang. I hung out with the ugly parts of me and I didn’t let them win. I laid on the ground with sore arms, busted knuckles, covered in oil and dirt with sub-par tools feeling totally defeated and I rescued myself. As a woman, I hope I can show other women that they can do the things that men typically do for them. As a human, I hope I can show you that life is worth going after and to not give up. I want to encourage you to do hard stuff and be proud of yourself. Life isn’t meant to be a microwaved dinner eaten half asleep. It’s meant to be consumed raw and wide awake. Get out there and do the damn thang.

11 Comments on “Let’s Get it Started”