Posted: May 11, 2018 Under: Blog By agirlandhercommander 10 Comments

Something I didn’t mention before, is that during the time Alice was visiting, Mander had sprung a leak. Two leaks to be exact. What should have been a semi-easy task of fixing Mander’s water lines became more like working on a chain gang. A chain gang where everyone laughs hysterically at how miserable they are.

Most of my water lines in Mander are still copper, silly I know, but laying new lines is a bit involved. They all held water initially so if it’s not broke, don’t fix it, right? Well, after bouncing down the road for a while I developed some leaks where the sink lines, which were plastic, met the old copper lines. Alice and I assessed the situation and thought, ok so we pull out these old junky plastic lines, get new braided lines and bridge the two with a couple of shark bite fittings. That should be easy enough, no? We got to work. 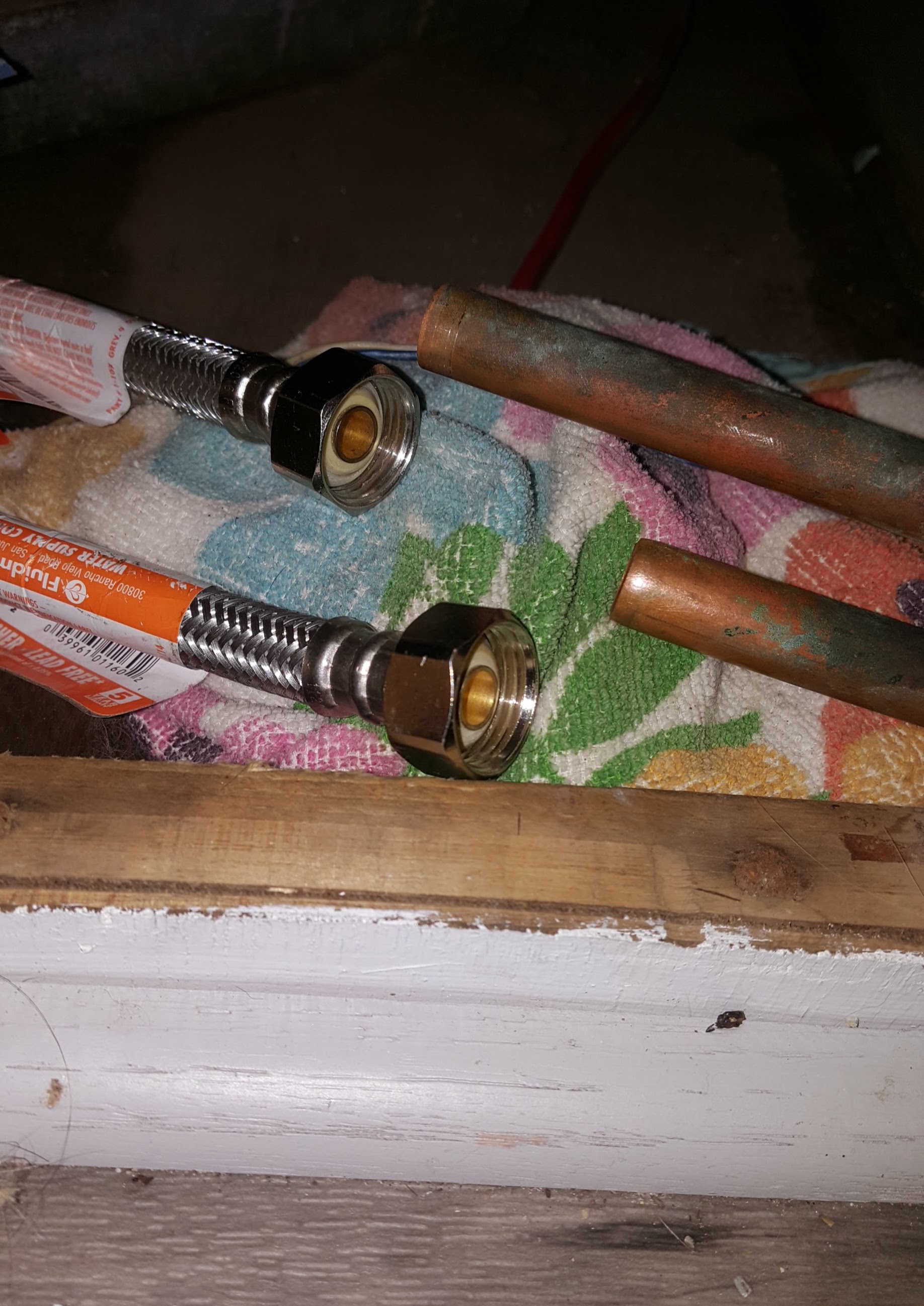 First, in order to work on plumbing one must excavate the contents of ones cabinets all over the floor. FYI, messiness = anxiety for me. We ripped out the old lines, cut the ends off the copper lines to remove the fitting and headed to Home Depot. We tried all the shark bites on the bits of copper ends and none would fit. So we asked an employee what the heck gives. He informed us that old RV’s might have a weird size line, like for air conditioning or they might possibly be metric. That sounded a little silly to us but what did we know? Maybe this dude was right. He suggested we try a different store that might have those sizes.

That store didn’t have any fittings that fit either but the worker there suggested an RV place. The next day I called the RV place to ask them if they had these illusive, weird sized fittings. This guy happened to know a bit of information that halted the wild goose chase right then and there. He informed us, that over time, copper lines will expand, turning them into a size that doesn’t exist. This was the first either of us had heard of that but it really made the most sense. We looked closer at the lines, and sure enough, the hot line was even more expanded than the cold line. We knew what we had to do.

We went back to Home Depot, picked up some sand paper and the shark bites for the size the lines originally were. Then we started sanding. The spot where the copper lines end, is under my closet and you can only access it from the heater vent cut out or the drawer hole. So we crammed our hands in there and tried to evenly sand down these lines. We worked at the same time, we took turns, we tried new techniques, one person would feel like it was a lost cause and the other person would be reinvigorated and feel like they were finally getting somewhere. Then we’d swap. One giver-upper, one cheerleader. We forged on. We took to trying to hammer on the shark bites as soon as they would slide on even the slightest amount but they would never go on far enough to grab. This went on for days. We lived in a mess, with no running water and the task of sanding always at hand.

This is a Shark Bite.

This is how they are constructed

Finally, with sand paper cut fingers, we were able to press and hammer on the shark bites. We were overjoyed and immediately got the lines coming from the sink into position to connect. It took us both one look at the lines, and then one look at each other and we completely lost it. The shark bite fittings that we had so painstakingly put on were female ends and they should have been males. We thought this was the funniest thing that ever happened in the history of the world (obviously we were delusional at this point from staring into a black hole for days on end). We laughed so hard it was inaudible. We laughed until our cheeks and abs hurt and tears streamed down our faces. Then we got in Alice’s truck and went back to Home Depot to buy pieces to connect the 2 female ends. There was no way, now that we got those shark bites on, were we taking them off. Once we got all the pieces we needed, we finished the job and put Mander back together again. What a treat it was to have running water! Unfortunately, that luxury was short lived.

Alice and I came back from our trip to the coast and I fired up the water heater to take a long overdue shower. All the sudden the pump started running and Alice and I looked at each other like nooooooooooooo! (running pump means you got yourself a leak) I tracked the sound of water to outside of Mander and saw it was pouring from the water heater. I guess I had something to fix while Alice worked on her truck! The next day Alice went to go work on her transmission and I pulled the pressure relief valve on my water heater and scooted to Home Depot. I picked up a new one and with fingers crossed, installed it. THANK GOD it was that easy of a fix and I was back to having running water!

Just as I was starting to get used to having running water again, my pressure release valve broke on my hot water heater. #itneverends #homeownership #diytillidie

A couple days later, Alice had good news too! She was able to rebuild her transmission and with the new parts, it was back in working order! We went out and celebrated this great achievement by having not one but TWO margaritas each. Now that her truck was fixed we knew that meant our time together was coming to an end. We reminisced about the pretty amazing things we had done and the epic memories we had made.

Alice had a goal that needed to be accomplished and that meant finishing her drive to New Orleans. She took a day to move out of Mander and prepared to hit the road again. I wasn’t looking forward to saying goodbye because we had grown mighty close over our 3 week crash course into each other’s life. We had gone from friends supporting each other over the internet to spending 24/7 with each other. We had developed a routine and her absence was going to be a noticeable one.

We said our tearful goodbyes and I watched as Alice pulled away from our home on wheels lined street. Just as I suspected, Mander felt a bit empty without Alice the next morning. Moonchi missed her buddy. I missed my buddy. My Russian speakin’, swing dancin’, truck fixin’, belly laughin’, opinion havin’, weirdo roommate buddy.

I have no doubt that Alice and I will remain lifelong friends. I know our connection and the bond we formed is the kind that doesn’t dissipate over time. I feel so grateful that things worked out the way they did, even the not so great stuff. If Alice’s tranny would have given out somewhere on the road, she wouldn’t of had the refuge of Mander. We probably wouldn’t have spent the holidays together and we might not of had our adventure to the coast. We both believe in the magic of the universe and that it has your best interest in mind. In this case, it certainly felt true. Who knows, maybe there was even a little Mander magic involved. I wouldn’t be surprised to learn it took a double dose of magic to produce that level of badassery.