Posted on July 2, 2018 by agirlandhercommander 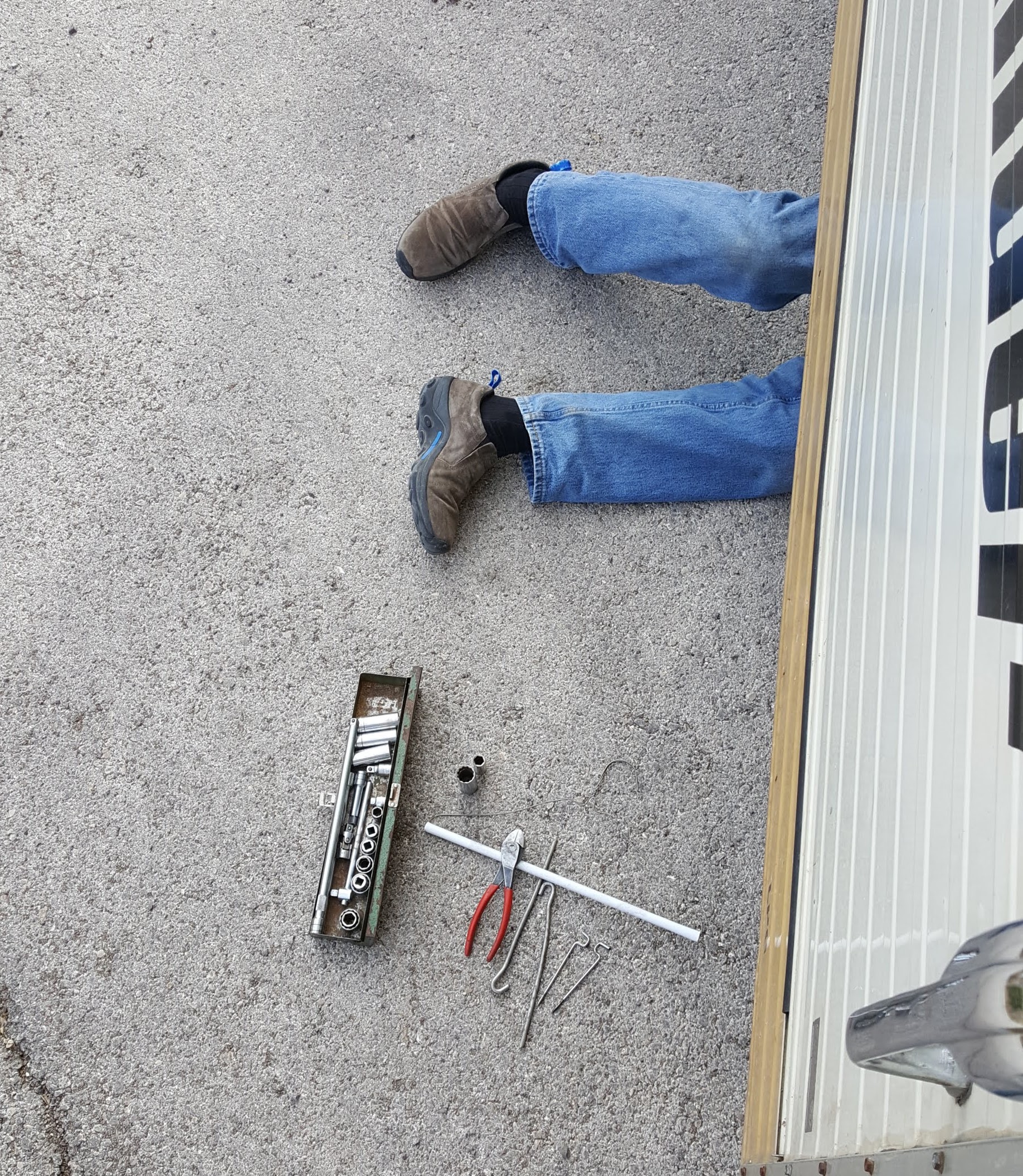 Grinnell is a wizard problem solver. He’s innovative and seems to be the type of person that enjoys a challenge. When Linda clued him in to some of the issues I was having with Mander, he didn’t hesitate to offer to take a look. I ain’t no fool. When there’s a chance Mander can get some extra love, I readily accept.

Grinnell and I crawled under Mander and started poking around. I have an oil leak from my oil pan and I had previously tightened all the bolts I could get to. There were still a few that didn’t get tightened because it required a socket wrench extension to reach them, which I didn’t have. Grinnell looked at the tight spot where those bolts were and said he had an extension that should be able to get in there no problemo. Then we looked at my exhaust. The free fix I got back in Kansas City had fallen apart and I was back to being loud as hell and getting mildly sedated by carbon monoxide. We were going to have to get creative if we wanted to fix the exhaust in a campground, sans welder. I was thinking there probably wasn’t much we could do about that issue.

I fired up Mander and we listened to the engine. Overall, Grinnell was impressed with my 1978 big block! He fetched his tools and tightened up the oil pan bolts with his extension. By now, the sun was setting and after the day I had, I was feeling pretty spent. I said goodnight to my new friends and crawled into bed. I pulled out the park map and located the campsite, Rattlesnake Mountain, I was scheduled to be at the next day. I had no idea it was all the way back at the entrance of the park and down a 5 mile “somewhat difficult” dirt road! Ugh!

I lay in bed with residual anxiety from the day still coursing through my veins. I knew I needed to drive back out on the road I came in on, which was hard not to stress over. Wondering if I was going to make it was completely warranted. Adding my newly learned information about the location of Rattlesnake Mountain to the mix, made it all so much worse. Driving to that, not even semi-conveniently, located campground was the last thing I wanted to do! If you’ve never driven your house down a busted up dirt road, let me tell you, it isn’t pleasant. I couldn’t relax. I was so wound up, I became sure that Mander was parked at such a severe angle that we were probably going to tip right over! I curled my body up at the tippy top of my bed trying to use my weight as a counter balance. My whole 115 lbs would surely keep us rooted to the ground as long as I didn’t stretch out. I dozed off and on, but with visions swirling around in my head of Mander toppling over and crushing me and my cats, I never really fell into the restorative sleep I so desperately needed.

The next morning I answered a knock at my door to find Linda standing there. She said that she and Grinnell were leaving Chisos Basin and they wanted to see if they could help me with Mander some more before they left. Apparently they had discussed my situation after we parted ways the night before and decided they needed to come up with some sort of band aide for my exhaust. I was so touched that they cared so much about someone they hardly knew!

While still eating his bowl of cereal, Grinnell told me the game plan. He was going to start working on getting the rusty clamp out of the way, while Linda and I scoured the campground garbage’s for some sort of metal or large can to make a patch with.

Linda and I came back empty handed. I had a smaller aluminum can that would have to work but Grinnell wasn’t stoked about it. While Grinnell and I were preparing the pipe for the patch, Linda points to a piece mounted to Mander’s butt and says, “What’s that?” Not knowing what she was getting at, I answered her. “It’s where the stinky slinky used to be stored I think but I don’t use it.” Then she says,”Well, can we use it for the exhaust?” I was like…”Ummmm hell yeah! It’s literally exactly the piece we’re looking for! You’re a genius!” I got to work removing the piece, while Grinnell made some final adjustments to the position of the exhaust.

Grinnell had managed to knock off most of the old weld so we had a decently smooth surface to wrap the patch around. With parts stolen straight from Mander herself, he was able to get a piece fitted around the two exhaust pipes and tightened the clamp down around it holding them together. It was a damn good patch and would help direct the carbon monoxide out of the cab. I was in much better shape than before but I was still absolutely dreading the idea of going to Rattlesnake Mountain.

I had expressed my concerns to Linda and showed her the map.  She suggested, I skip it all together and stay another night at Chisos Basin. That way, the next day, I would just have to get out of Chisos Basin and into Croton Spring and not have to move again for the rest of the 2 weeks. That idea sounded very attractive to me but I was hemming and hawing over spending the money to stay another night at Chisos Basin. The camp host had been watching all of us working on Mander and he seemed to pick up on the fact I wasn’t in the most ideal situation. He rolled through and I told him that I was thinking of staying another night and briefed him on the reasons why. He took my ticket and extended my stay without pay. I was so surprised and grateful and felt totally relieved. Just then Linda came walking up and told me she would pay for me to stay the extra night! I was basically getting pummeled by love and kindness!

After Grinnell was fully satisfied with his work on my exhaust, he cleaned up and we all said our goodbyes. They were off to a new campground in the park but they promised they would come check on me to make sure I made it to Croton Spring. I was brimming over with gratitude for these people. I never imagined in a million years that my solitary journey to life on the road would fill my heart with more love from others than ever before. That I would get to be the receiver of so much kindness. With the extra day I now had at Chisos Basin, I planned to take advantage of it. I took some deep breaths, centered myself and went off to do a hike in this beautiful place. I had tears of joy in my eyes, but instead of obscuring my vision, they only seemed to make the landscape sparkle a little brighter.

I have exciting news! I am now on Patreon! If you have been a repeat contributor to my gas money fund in the past, Patreon might be right up your alley. If you haven’t contributed in the past, Patreon could be something you’re interested in participating in! I have a reward tier starting for as little as $1 a month. In exchange for your patronage, I will be offering extra pictures, thoughts and even vlogs exclusively on Patreon! The vlogs will cover FAQ’s and I will also look to you to tell me what you want to see and know more about. Please check out my Patreon page by clicking here!