Posted on October 21, 2018 by agirlandhercommander 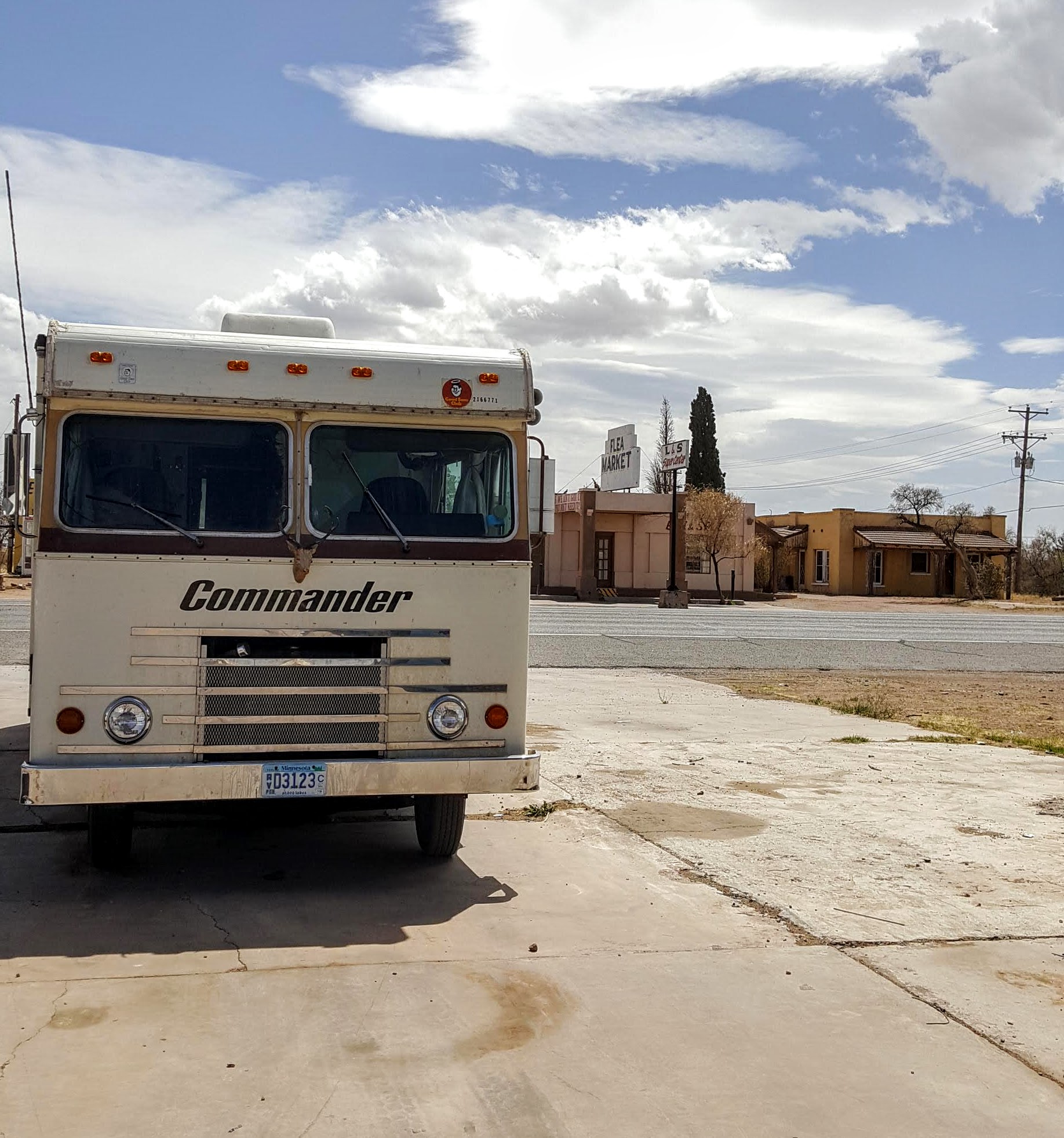 Mander is known for her spittin’ and sputterin’, so at first I thought it was just another plugged fuel filter. Luckily, I have long since learned to travel with extra filters, so it wasn’t no thang. I pulled into a rest stop, swapped on a new one and was on merry way.

After I got the new filter on, I continued heading north towards Van Horn, Texas. It was clear right away the new filter hadn’t changed anything. This spittin’ and sputterin’ was still there but I noticed it was a little different than usual. It was mostly only happening at 55 mph or faster. So I stayed under that speed and made my way to the truck stop in town. As per usual, I called my Uncle Buster and we discussed the different things that could possibly be going wrong with Mander. I decided to go to bed and deal with it in the morning.

I didn’t sleep well that night, concerned about what impending repairs I might be facing. I drifted in and out of sleep until I woke with a start and thought, “It’s the spark plugs.” In fact, it was like the thought itself woke me up. Just like that, I was almost certain that was the problem. I didn’t have the tools to do the spark plugs myself and it was about time for an oil change so I thought, why not treat myself and let someone else do the wrenching for once? I didn’t want to drive around with used oil and the cost of the tools could very well equal the amount to pay someone else to do the jobs, so I justified it. I made some phone calls and found a small shop in town that could get me in the next day. Since the weekend was approaching, I went to the parts store and got the plugs to have on hand.

I pulled up to the shop but wasn’t sure I had the right place. The garage doors were open but there was nobody around. The building itself was in a state of disrepair and looked long since abandoned.  There were car and truck carcasses littered around with their engine hearts pulled, dangling from chains. I went to what appeared to be the office and saw that the door was missing half the glass and you could easily walk in without even having to open the door. Not sure why anyone would need to go into the office though. All that was in there was an empty desk and a toy that aides toddlers in learning to walk.

I was just about certain I had the wrong place, when a young family walked up. The mechanic, his wife pushing a kid in a stroller and a 4 year old girl in hand. While his daughter picked her nose and climbed all over my stuff, the mechanic pulled a spark plug to see if it could be the offending part and sure enough, it looked more than ready to be replaced! The only problem was, the spark plugs I was sold at NAPA were not the right ones. And since it was the weekend, they wouldn’t be open again until Monday. The mechanic said I could stay in his lot, which I was very grateful for considering my other option was a very loud truck stop.

Since I was stuck in Van Horn for the weekend, I decided to make the best of it and explore! After all, that’s the beauty of traveling full time. You go wherever the break downs take ya and that’s where you are! No need to adhere to any sort of itinerary because you are freeeeeeee! I went with it and set out on foot to check out Van Horn. Not to be left out from Terlingua and Marfa, Van Horn is putting out some strange vibes of it’s own. Maybe not weird enough to be seen as a tourist attraction, but I thoroughly enjoyed walking around and soaking in all the peculiarities of the town. Main street shows signs of a once bustling city, with hotel and store fronts a plenty. Now, it appears as if the zombie apocalypse swept through, people dropped what they were doing right then and there and walked off. I kept looking in stores and wondering if they were closed for the weekend or abandoned, like the inch layer of dust on top of the products implied. 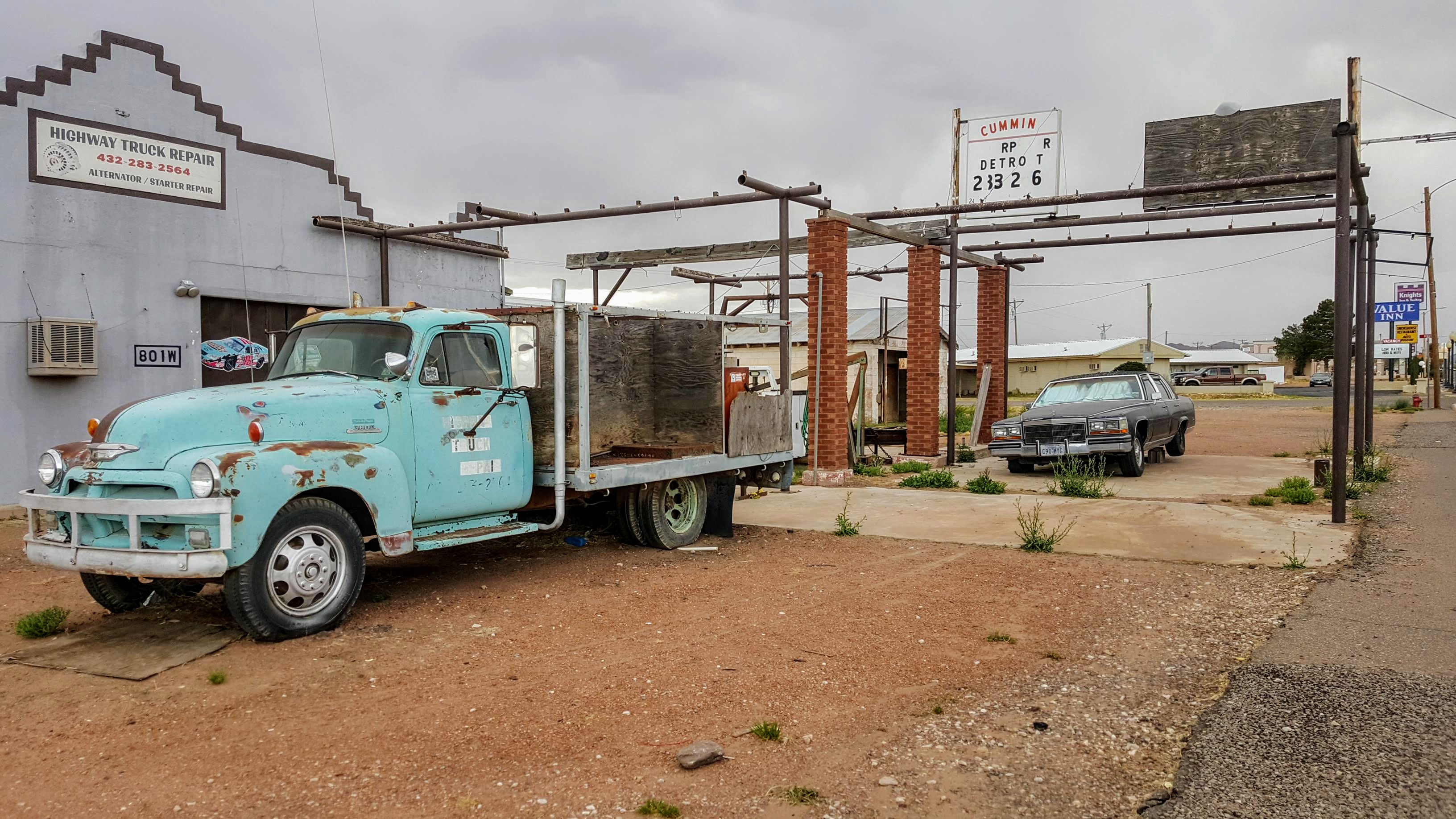 Come Monday, the mechanic was back to get the job done. We went back to NAPA with an old spark plug in hand to make sure we got the right ones. He swapped out the plugs and preformed the oil change. And this is when I realized something totally hilarious.

I may not have mentioned this to you before, but Mander was leaking roughly a quart of oil every 200 miles. I had been adding and checking the dipstick religiously as to make sure I didn’t run her low on oil. When the mechanic performed the oil change, we checked the dipstick and it was dry as a bone. I drilled him about the quantity of oil he put in and he assured me it was the correct amount. He called NAPA and another source to double check that 6 quarts was, in fact, the correct amount for my engine. I reluctantly believed him and realized that if the correct amount was in there now, and the dipstick was dry…that meant I had been adding at least a quart too much this whole time! What further confirmed this theory was that the aggressive oil leak I had been combating for the last 5 months, came to almost a screeching halt. Mander had simply been trying to spit out all the extra oil I had been feeding her. But in my defense, who would think that the dipstick wouldn’t be accurate!?

With my new spark plugs and the correct amount of oil, I pulled onto the highway to put the fix to the true test. I reached 55 mph and the spittin’ and sputterin’ was gone! I think it’s fair to say, Mander spoke to me in my sleep. Just another testament to her magic! Now me and my magic machine were on our way to a place that had been on my bucket list for years….The White Sands National Monument! Mander on!

I am on Patreon!  I have a reward tier starting for as little as $1 a month. In exchange for your patronage, I will be offering extra pictures, thoughts and even vlogs exclusively on Patreon.  Please check out my Patreon page by clicking here!