Posted on January 2, 2019 by agirlandhercommander 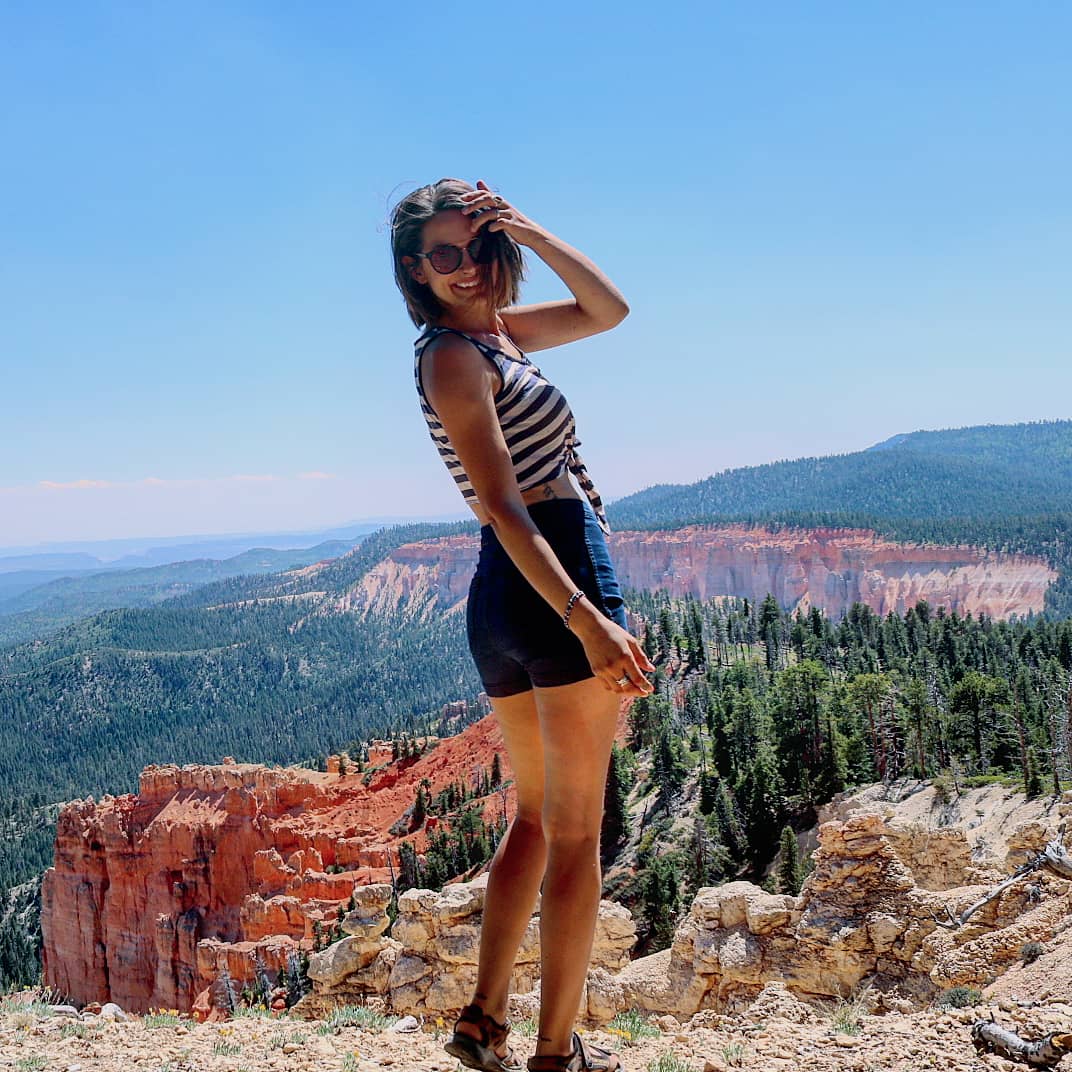 Long before I got Mander, Utah had been on my list of states I wanted to visit. I had several places in Utah pinned on my google map and I was planning on trying to see as many of them as I could.

The trouble was, it was hot. I hadn’t known I would be traveling at the speed of a turtle walking through molasses, otherwise I would have maybe planned it a bit differently. The way it stood now, I was going to be spending the summer in the south west. Whoops.

Nevertheless, when I crossed the border into Utah, I had another one of those WOOOOO-HOOOOOO, laugh, cry moments. I’ve come to know these moments as unadulterated joy taking over my body and although it’s happened plenty of times by now, it still manages to catch me by surprise. We made it! Another milestone reached in this old, rolling home of mine! Let the Utah adventure begin!

Did I mention it was ridiculously hot? Unfortunately, I found myself skipping over things I had pinned on the map because it was just too miserable to hike. I was worried about cooking my cats if I was away for too long so I was really limited to what I could do. I stopped and did the short hike at Horse Shoe Bend and took the pictures people take there. It was cool but definitely one of those spots that is over saturated with tourists. I was glad I went early in the morning and got out of there before the tour buses started pulling in. 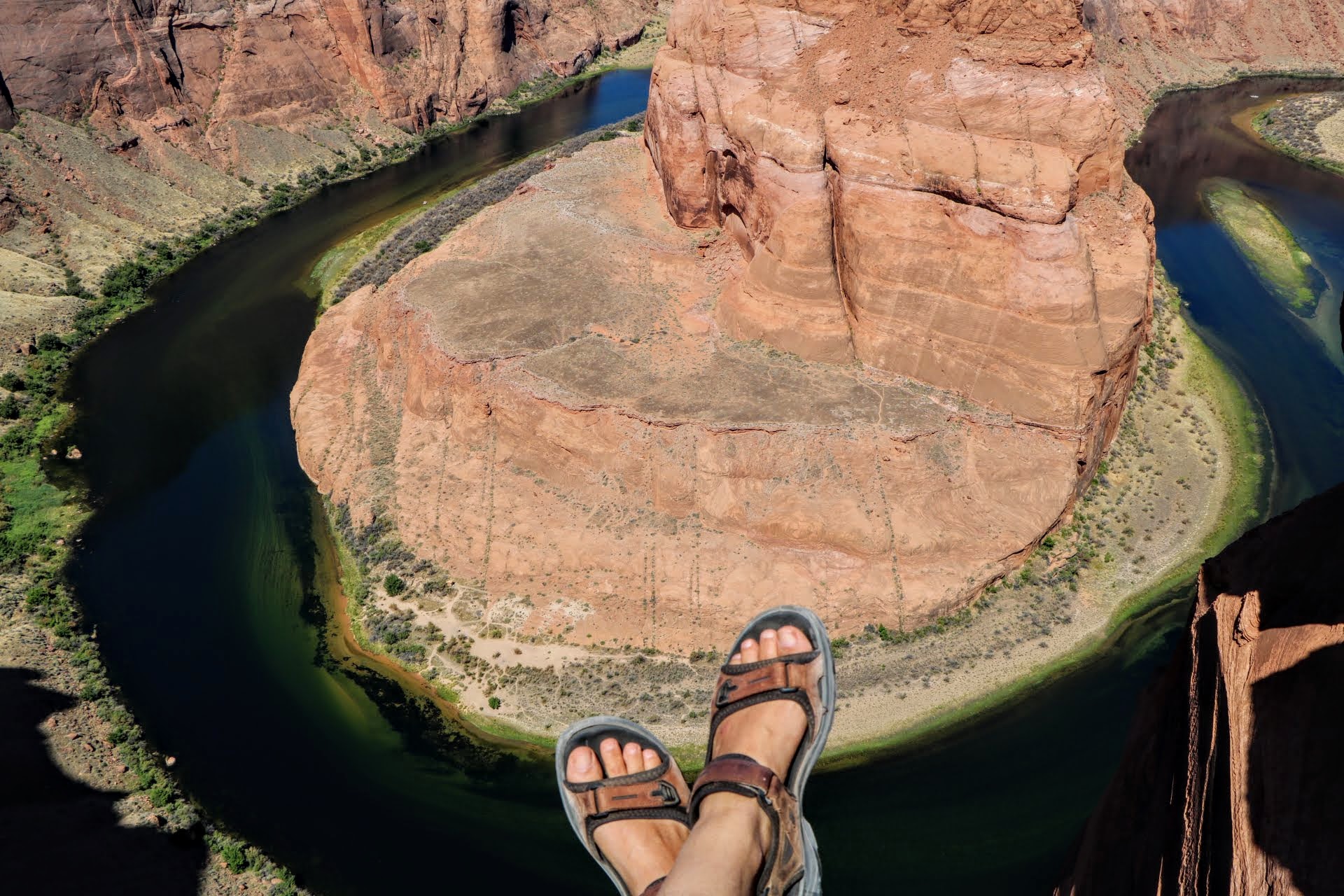 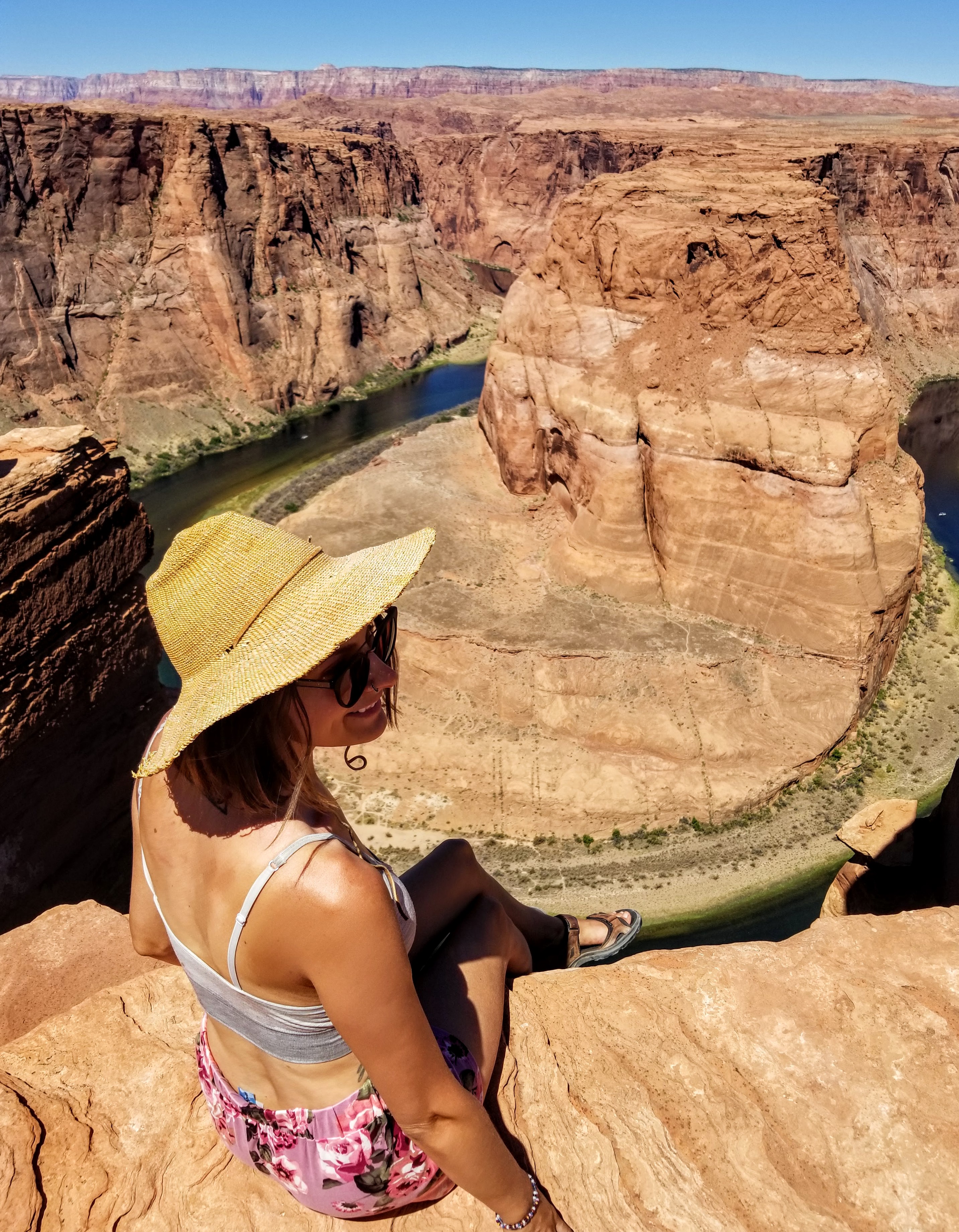 After a couple of days suffering in triple digit temps and not really doing anything worth noting, I did some research to find out where the heck I could go to escape the heat. Bryce Canyon had some mighty attractive temperatures, 80’s during the day and cooling down to the 50’s at night for perfect sleeping weather. That settled it. I peeled my sweaty skin from the dining room chair, got in the driver’s seat and pointed Mander in the direction of Bryce Canyon National Park.

I bet you can guess why Bryce Canyon is cooler than other parts of Utah….elevation! It was a bit stressful as I drove Mander up those windy hills, having to drop her into first to go anywhere at times, but we made it! I turned on a dirt road, right before the entrance of the park, that was supposed to lead to what appeared to be the most conveniently located boondocking spot of all time. Just as I turned, Mander started hesitating and wouldn’t take much gas. Luckily, it was slightly down hill, so I popped her into neutral and rolled my way into the first open spot I saw. I put her in park, gave zero shits about why she was fussing and turned her off. How could I when I had just arrive at a place like this!? 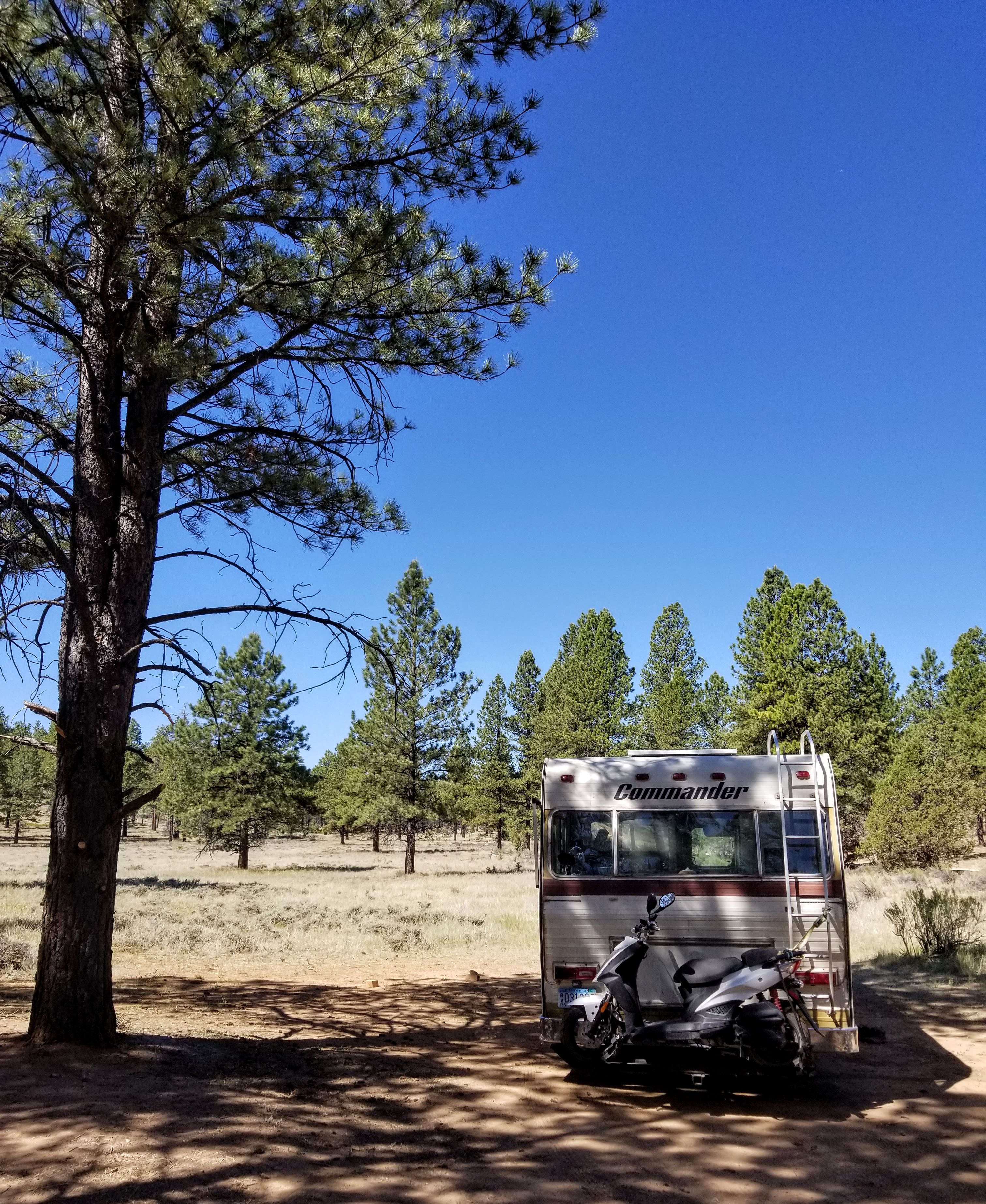 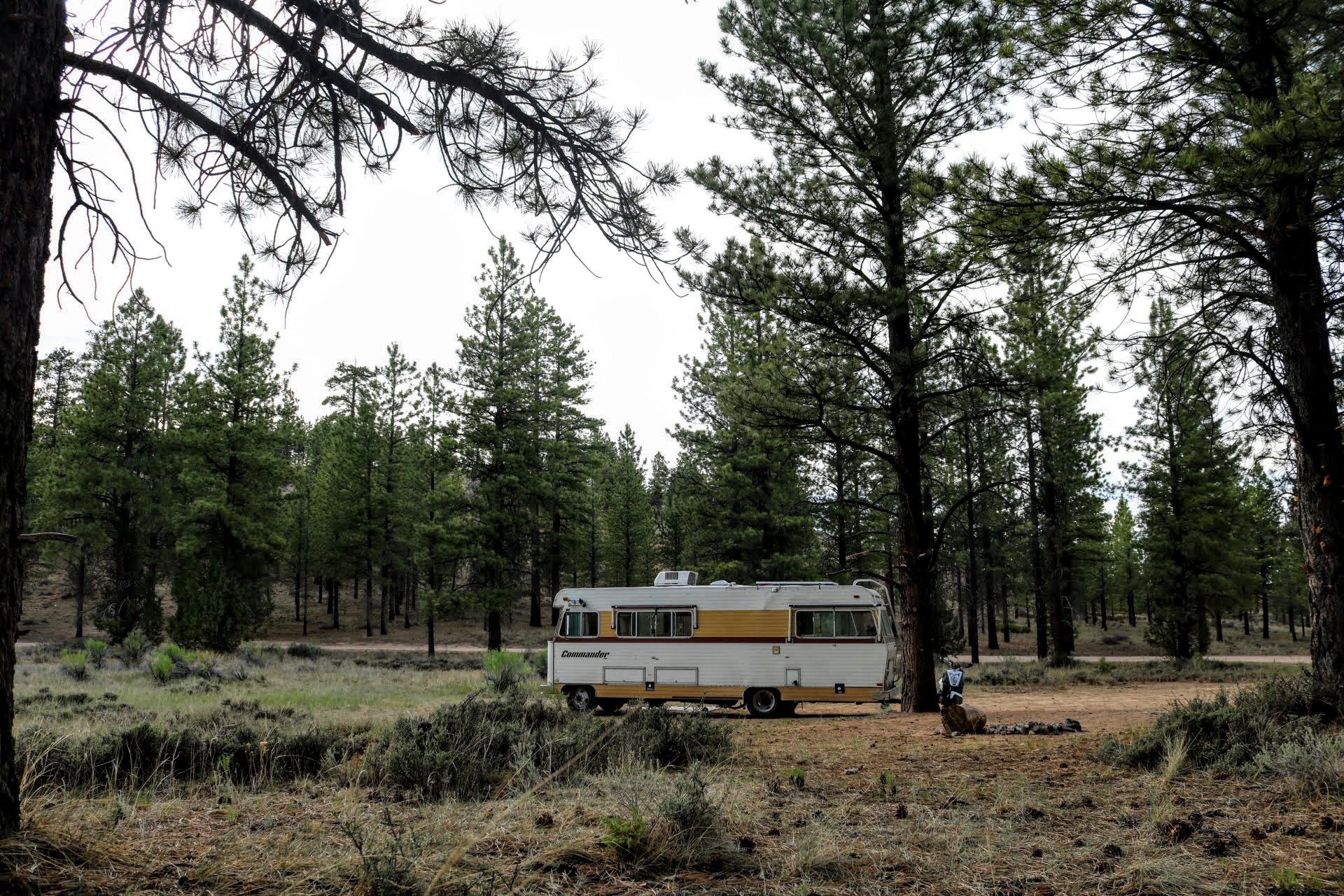 I was as happy as a clam. The weather, just as promised, was perfect. The camp spot was surrounded by beautiful trees and so close to the park it was almost in it. This seemed like the perfect place to get better acquainted with Utah, so I offloaded my scooter and settled in. Atreyu tried his best to get me to stay in bed and cuddle with him forever but eventually I tore myself away from his cuteness and scooted into the park. 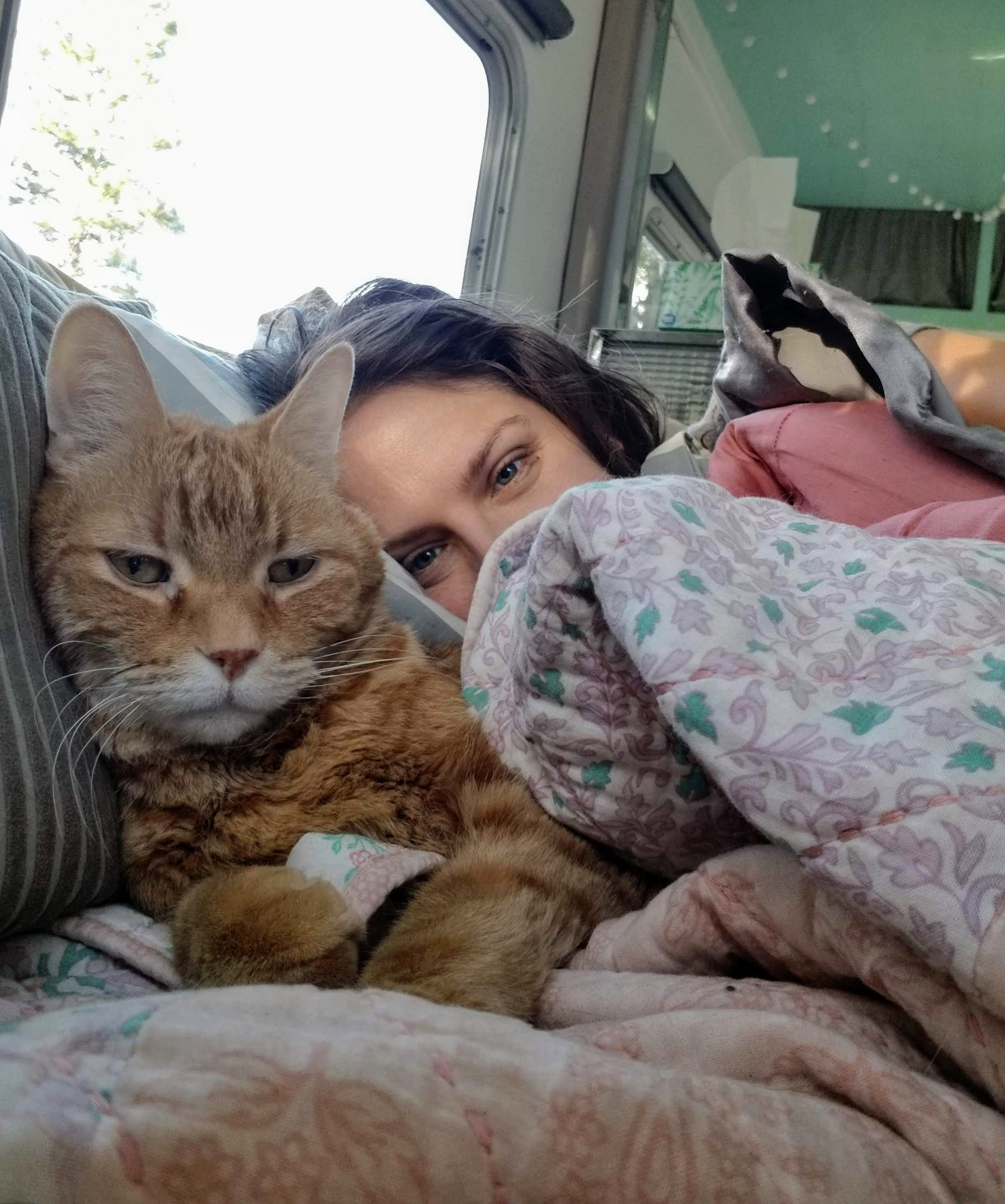 As per my usual routine, I went to the visitor center and watched the documentary. Then I drove through the park, stopping at various view points and got a feel for the place. This majestic beauty was modeling for all the tourists at one of the vistas. I think he was hoping to earn some people food. I did not oblige. 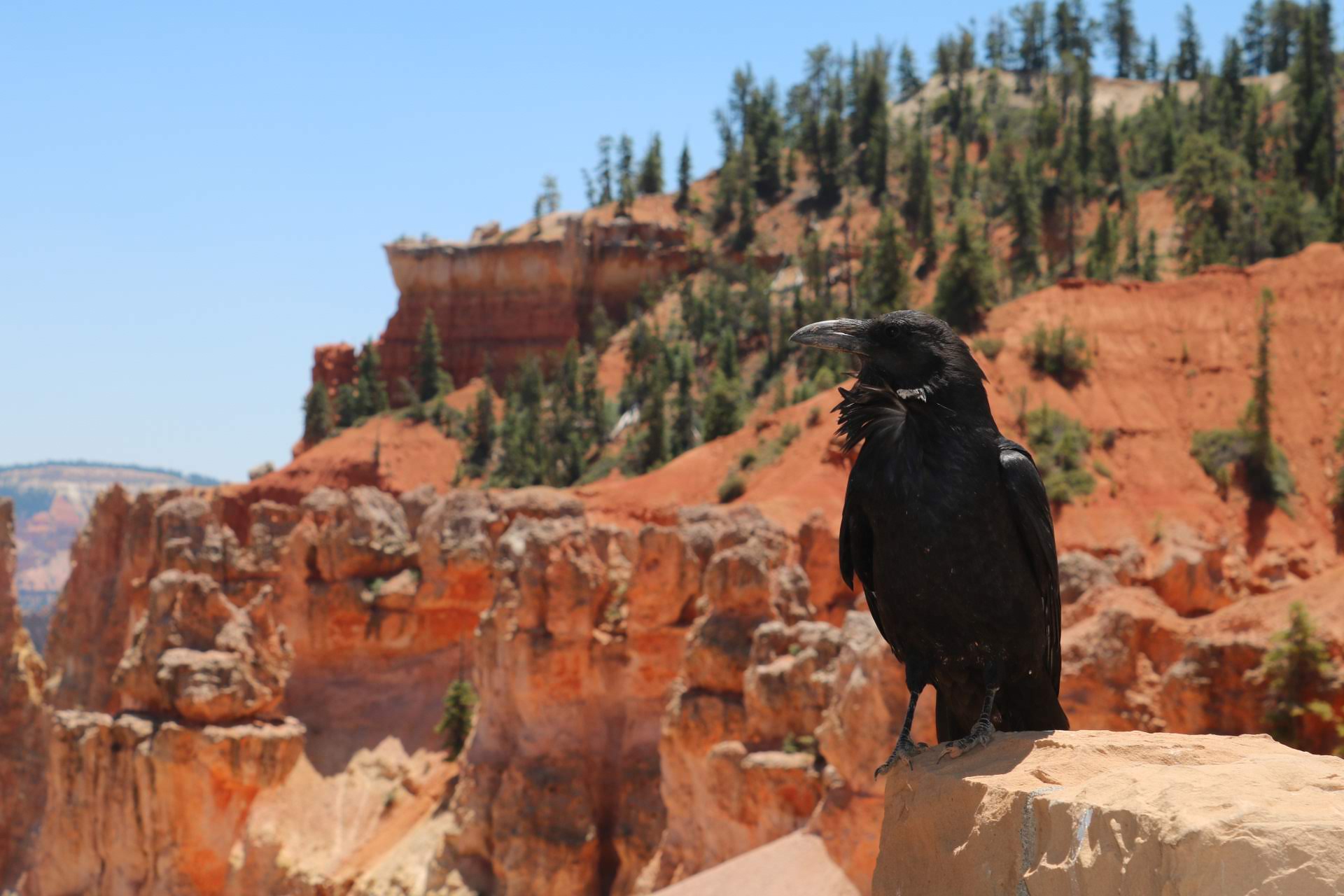 After I scoped out the park, I went back the next day and did a hike. I saw the hoodoos Bryce is known for and a lot of other red rock epicness. 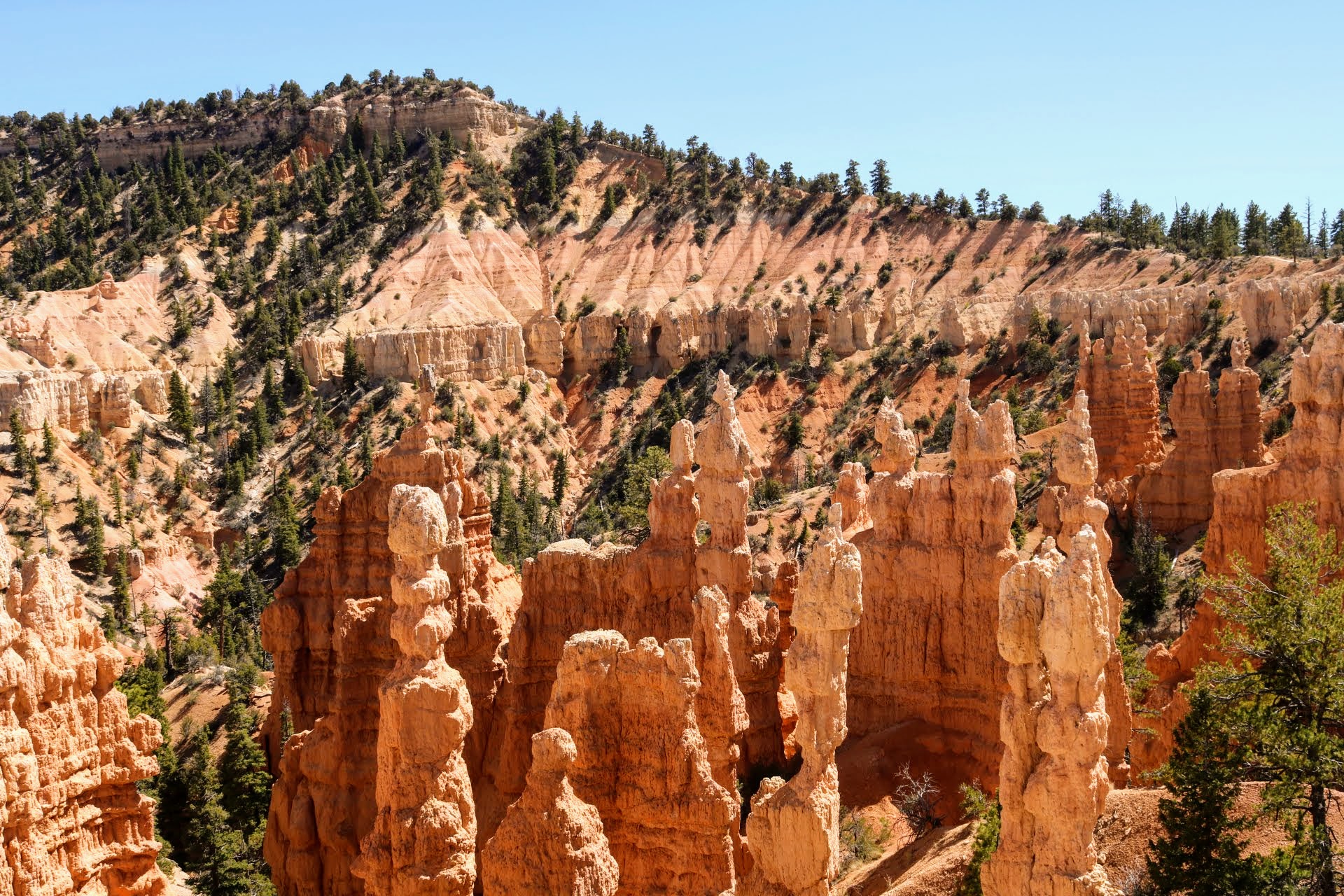 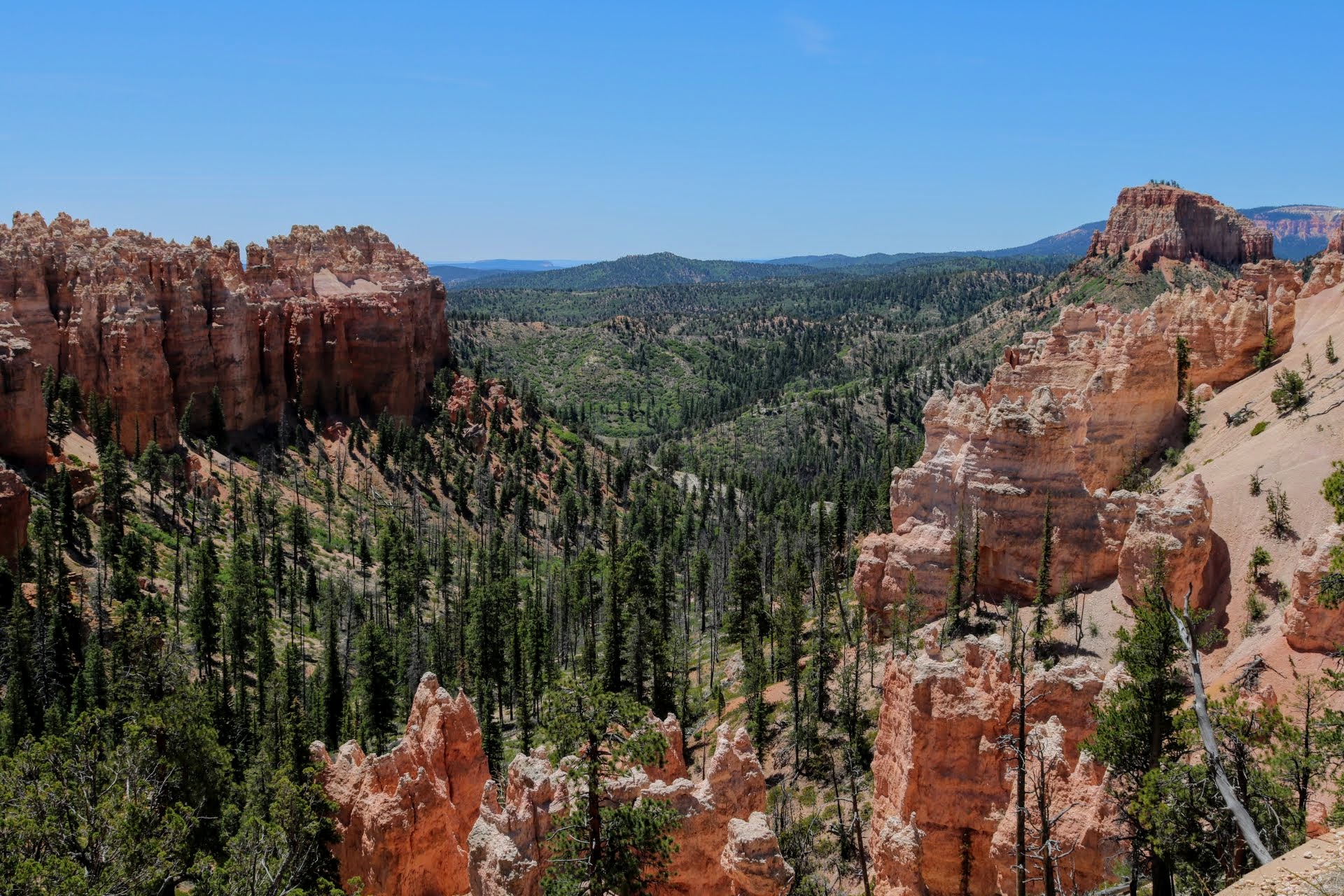 I learned about a hike on the other end of the park, called Mossy Cave Trail, that was said to have a waterfall. On a hot day, I topped off the scooter’s gas and went to go check it out. It was absolutely gorgeous! There’s just something about the presence of water in the middle of a desert that is magical. 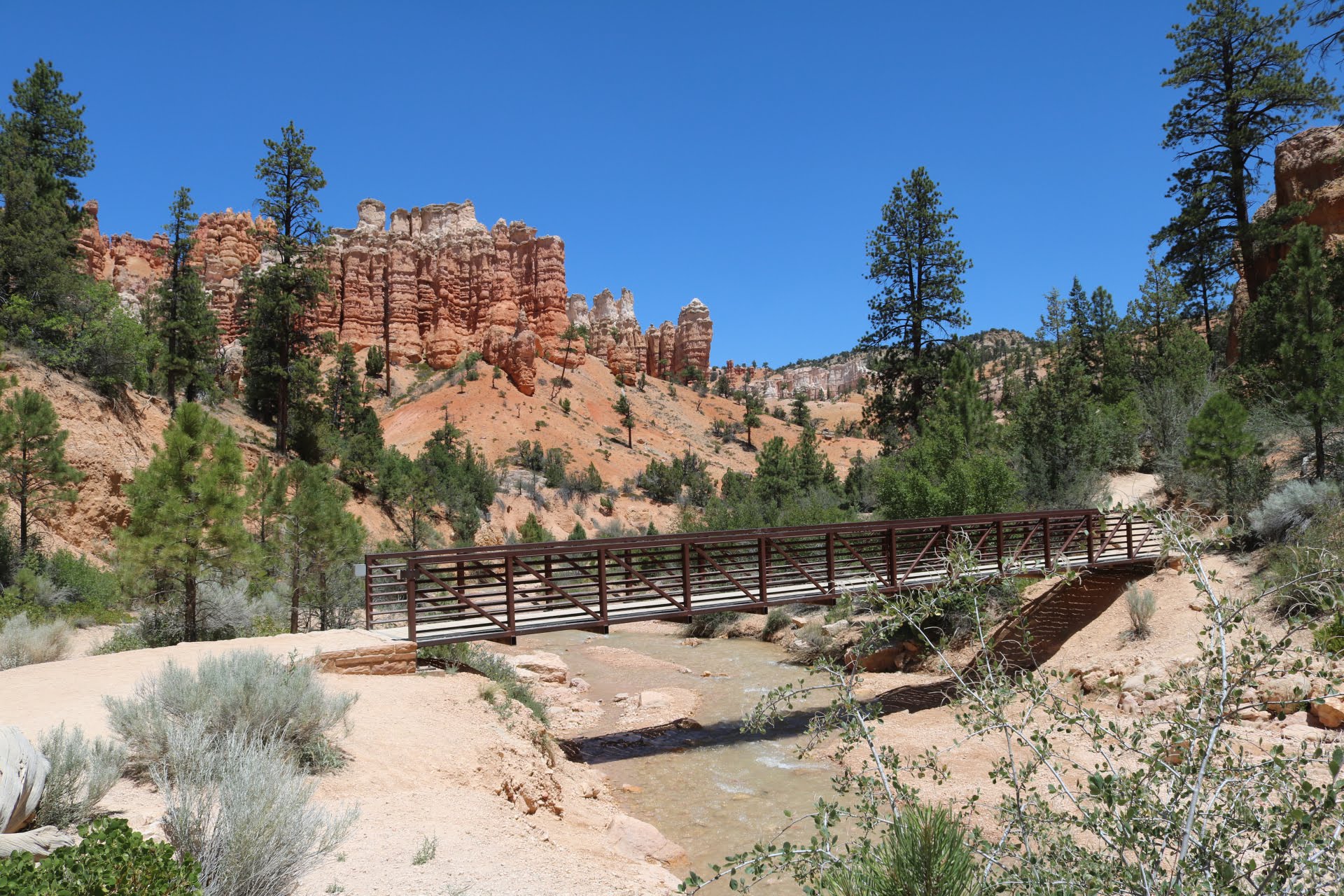 I couldn’t help myself from getting in, swimsuit or not! I loved this hike so much I spent all day there and even went back another day and did it again. Definitely don’t skip this one because of it not being located by everything else. It’s well worth going out of the way for!

I have more to tell about my time in Bryce canyon, as this only covers my first few days in the park. When all was said and done, I spent 2 1/2 weeks at there so stay tuned!