Carb Swap in a Dirt Lot

Posted on March 31, 2019 by agirlandhercommander

I had a few days to kill before my appointment to get my exhaust manifold worked on so I headed to a nearby campsite. I didn’t get 1 mile down the road before Mander let it be known she was having issues and was most likely not going to make the drive.

I should preface this part of the story by telling you that after leaving Bryce Canyon (prior to any knowledge that I had brake issues), my plan was to head to Salt Lake City and do some work on Mander at my friend, Gavin’s house. I had been plugging up so many fuel filters, I knew I needed to drop my gas tank and I knew I needed a driveway and a buddy to help me. On top of that, my carburetor had begun to leak and never acted right from the word go. I could screw the air/fuel mixture screws all the way in and out and it never changed the way the engine ran. I had decided I would like to upgrade my carburetor instead of rebuilding, it was just a matter of when I was going to do that. At this point, I didn’t feel confident that Mander was going to make it the last 150 miles to SLC to do these repairs.

With Mander now sputtering and running really rough, I thought that maybe the carb had finally taken it’s last breath. I had just replaced the fuel filters so I knew that couldn’t be the problem. I limped to a vacant dirt lot on the side of the highway and tried not to freak out. What to do? What to do? What to do?

I called Gavin and told him what was going on. It just so happened that he and his friend, Josh, were thinking of coming to the next town over to look at an old Pacer that was for sale. I asked if they would be willing to help me put on a new carburetor if I located one and they agreed! I got on the phone and as my luck would have it, O’Reilly had the Edelbrock I was looking for. I took my scooter into town to pick it up and grabbed the guys some food since they would be arriving around dinner time. I also swung by Jay’s with ice cream for everyone as a thank you and we chatted about my newest predicament.

The next evening, Gavin and Josh showed up and while they were eating, Jay drove by to check on me. Jay donated the most epic headlamp to the cause, making it much easier to do the work we were about to do at night. I felt really lucky to be so supported in such a stressful time!

Josh took the lead on the repair, since it wasn’t his first carb swapin’ rodeo and Gavin and I were his assistants. It didn’t take too long before the old one was off and the new one was on. Unfortunately, once the new one was on, we realized we needed some sort of adapter for the throttle linkage because it was not hooking up right. None of the part stores in town had what we needed and it would take another day to get it ordered. Gavin and Josh had to leave later the next day but we decided to head to the local junkyard to see if we couldn’t scrounge up an adapter bracket there. I might add, Gavin and Josh both love any opportunity to comb through junkyards and I certainly don’t mind it, so it felt like a fun adventure! Except…

Remember how I said I had been running from the heat? Yeah, well I had come back down into lower elevation and the heat was waiting to greet me once again. We got to the junkyard and under the blazing hot sun we rummaged through rusty metal, broken glass, weeds and mud. Josh scored big time when he pulled a couple side panels out of the weeds for an old truck he was rebuilding. I, however, had no such luck. I stuck my head under every hood that looked like it might contain a 440 and I even spent a long time searching a room inside a ramshackle side building stuffed to the brim. The floor was buried under various mechanical parts and boxes of lord knows what, forcing me to carefully walk on top of everything as I picked my way to the shelves filled with carburetors. The shelves were bowing and breaking under the weight of so many carbs and still, I found no adapter.

After a long, sweaty day at the junkyard, I waved the white flag and ordered the part from the store and in the meantime, rigged up this bolt, washer and nut combo so we could at least take Mander for a test drive to see if all our hard work had paid off.

We all piled in Mander, fired her up, checked for leaks (there was none! Yay!) and took her for a spin. The excitement was short lived as I could tell almost immediately she wasn’t driving right. We all thought maybe the rigging we had done for the throttle linkage was playing a role but ultimately, we weren’t positive. The good news was, that regardless of whether replacing the carburetor fixed the problem or not, it was something that needed to be done and was now checked off the list! Look at that shiny new piece of jewelry Mander is sportin’… 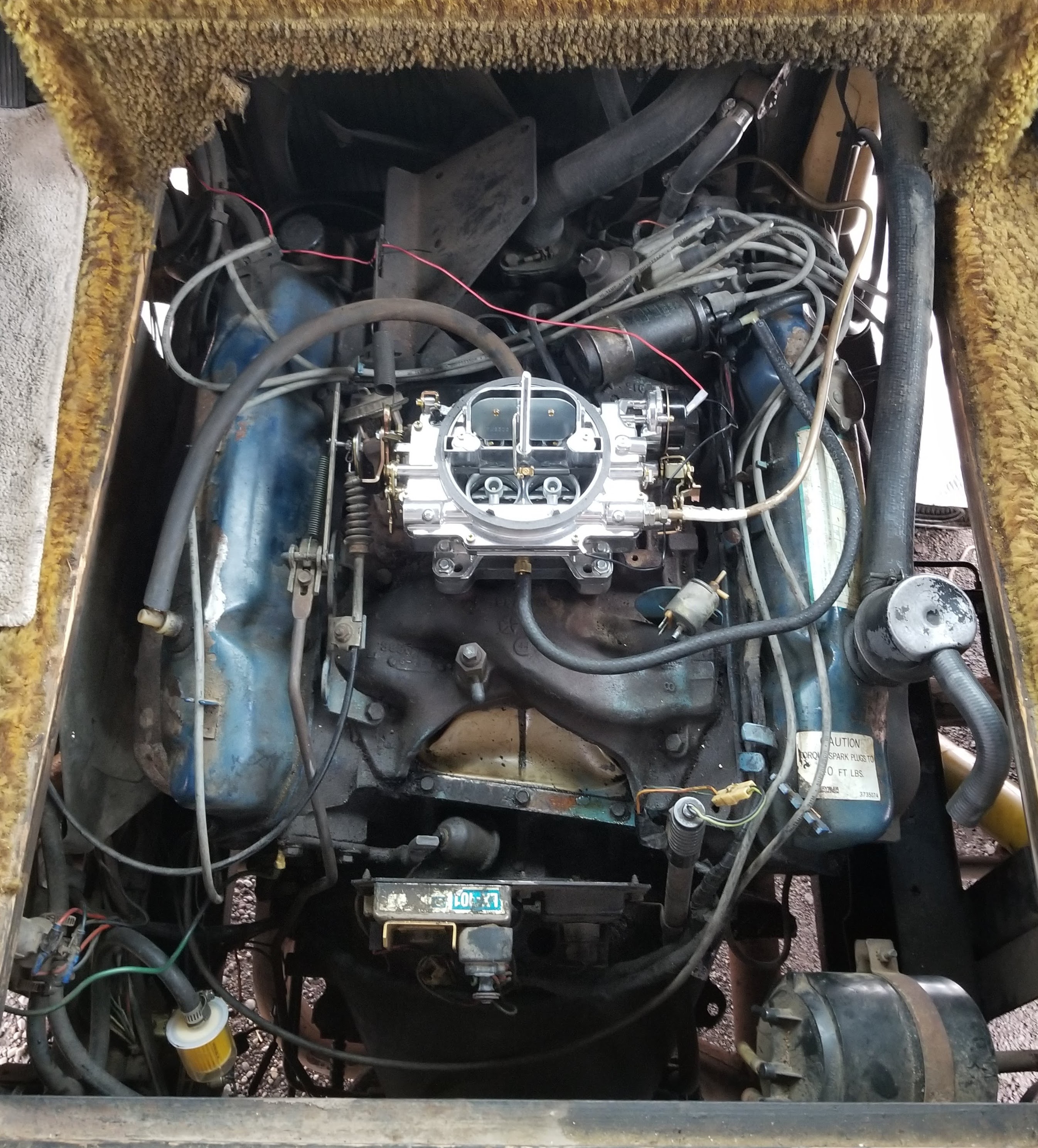 The bad news was, that if the new carburetor didn’t fix the problem, I still had to figure out what the problem was.

10 Comments on “Carb Swap in a Dirt Lot”