Posted on April 18, 2019 by agirlandhercommander 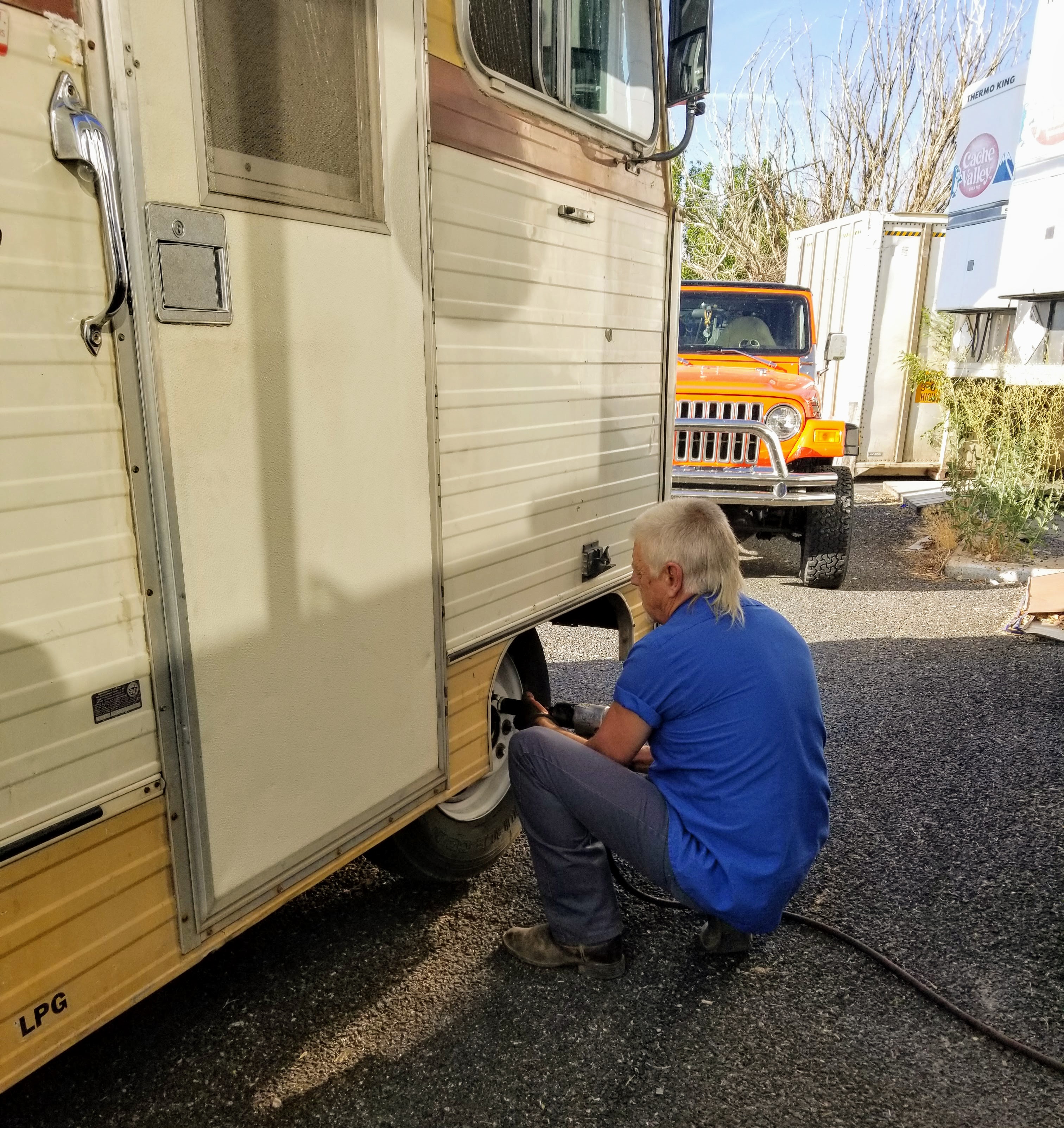 I left the dirt parking lot to head to my exhaust manifold gasket appointment with Ross. Luckily, the shop was a short distance away because Mander was still throwing a fit.

I limped into the parking lot and Ross got to work jacking up Mander and pulling her front wheel off. Just like Jay, Ross had no problem with me watching and learning as he did the repair. He seemed tickled that I had any sort of interest at all and was happy to answer my questions as they came up. We still weren’t sure if one of the exhaust manifold bolts had fallen out or was broken off, but I had been warned that if it was broken, it was going to be a worst case scenario. It would need to be drilled out, which wouldn’t be an easy feat and that would add on a considerable amount to the bill. So I had all my fingers and toes crossed that the bolt had jiggled it’s way out and was laying in a gutter somewhere, unnoticed.

Ross began taking the bolts out, and at once, the manifold came lose and coolant whooshed out onto the ground. I stood there thinking, “I have no idea how what I’m seeing is even possible but it can’t be good.” These thoughts seemed completely affirmed by Ross’ surprise and scramble to get a pan to catch the coolant. Once he got the pan in position he looked up at me and said, “Don’t freak out. Let me explain.” I did as I was told and listened to Ross explain that Dodge 440’s came with their exhaust manifolds bolted into the water jacket and it had been so long since he’d worked on one he had forgotten. I asked him to explain what a water jacket (where the coolant moves around the engine) was and after some more information and a good look at the situation myself, I concluded that Mander and I would live to see another day.

With the manifold now off, Ross was able to get a good gander and announced that, it was in fact, a broken bolt. I panicked a bit and started asking questions about what that meant and how much extra it was going to cost and if we had other options besides drilling it out. Ross, without really saying it, basically told me to shut up by handing me one of the non broken bolts and asked me to walk to NAPA and get a replacement for the broken one. I thought that meant that we were going to further discuss the situation when I got back but by the time I got back, he had already drilled it out.

I felt relieved that he successfully drilled it out but I was still nervous about how much more expensive it was going to be. He put everything back together and since the tire was already off, I took advantage of the situation and got to work replacing the spark plugs on that side. 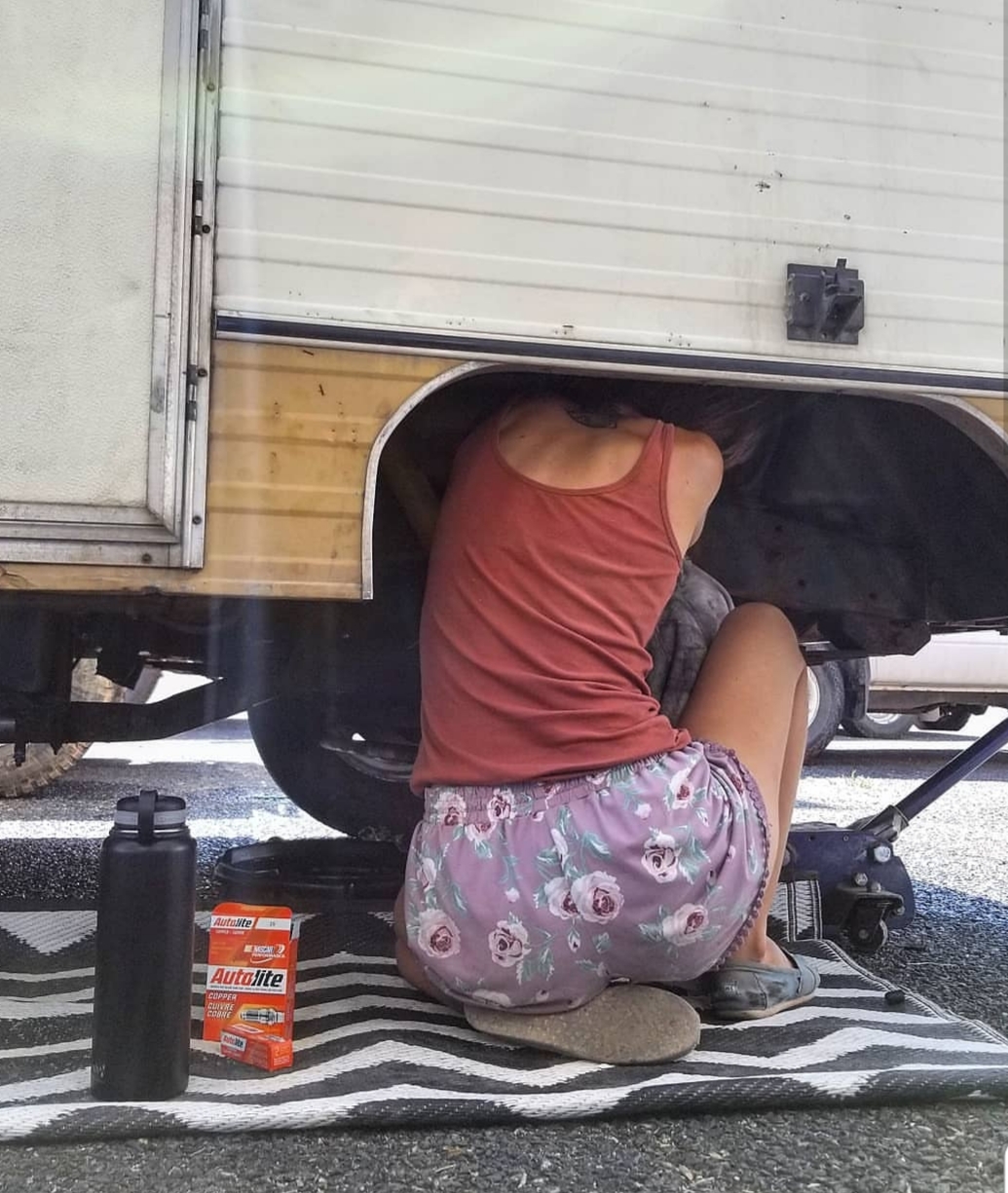 You see, before the guys left, we inspected a spark plug to see if it could be why Mander wasn’t running right. The plug wasn’t in terrible condition but it was gunky enough that we thought it would be the next best place to start in getting her to run smooth. While I was working on putting new spark plugs in, Jay, continuing to prove what an amazing human he is, swung by to check on me and see how the repairs were going. I told him I was still working on tracking down why Mander wasn’t running right and he invited me to come stay in his lot until I got it sorted. I eagerly agreed and was happy to know I was going to have a safe spot to put in the other four spark plugs and continue to trouble shoot if need be.

I finished the spark plugs, Ross put the wheel back on and showed me where I could get cleaned up. I scrubbed my hands, then asked Ross how much I owed him so we could settle the bill. He looked awkwardly at the ground, kicked an invisible rock and didn’t answer. I was super confused so I clarified, “I need to know if I can grab cash to pay for it or if I’m going to need to put in on my card…..” He pulled the bill from his pocket, peeked at it, stuffed it back in his pocket, stared at the ground and said, “Well, I suppose it’s just $12.” and promptly walked away and into the office.

I stood there motionless, processing what he said and then it hit me. He’s only charging me for parts. He did the labor for free. I grabbed my wallet, marched into the office, found Ross and hugged him until he was downright uncomfortable. I thanked him profusely and told him how much his kindness meant to me. He told me that he had recently had a heart attack and I’m not sure how that related other than maybe it was Ross’ way of showing gratitude for his life. Maybe it was Ross taking advantage of the fact that he can make a difference in someone else’s life. What a beautiful thing to bear witness to and be on the receiving end of.  I got an obligatory photo with Ross, fired up Mander (OMG I NEVER KNEW HOW QUIET SHE COULD BE) and went across the street to Jay’s. I think it’s safe to say that going to Richfield couldn’t have been a better choice. 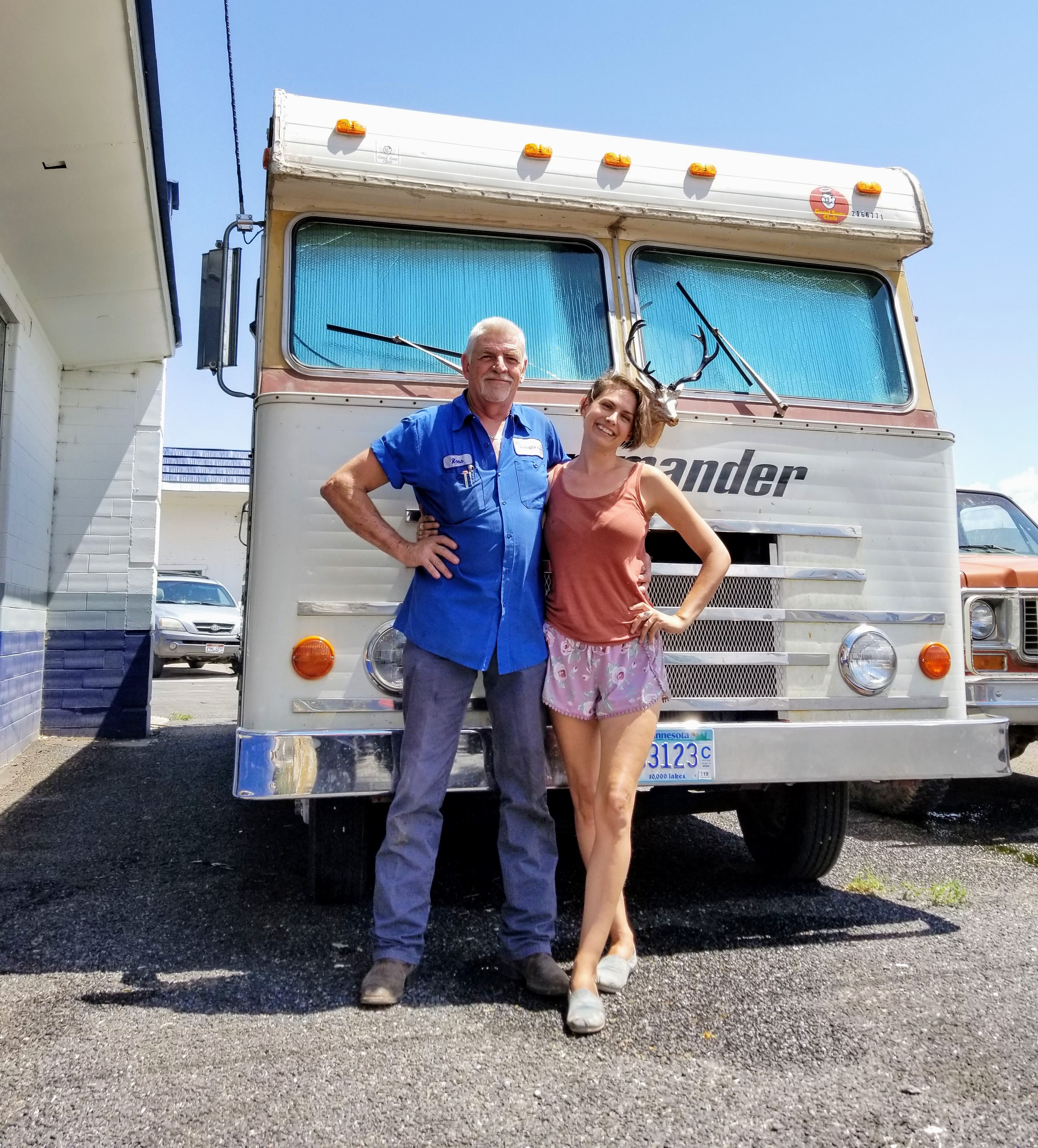 I just filmed a day in a life vlog and uploaded it to Patreon!

Sign up for any amount, even just $1 a month, and gain access to all Patreon exclusive content. In exchange for your patronage, I offer extra pictures, thoughts and weekly vlogs. Check it out by clicking here!