Posted on June 2, 2019 by agirlandhercommander 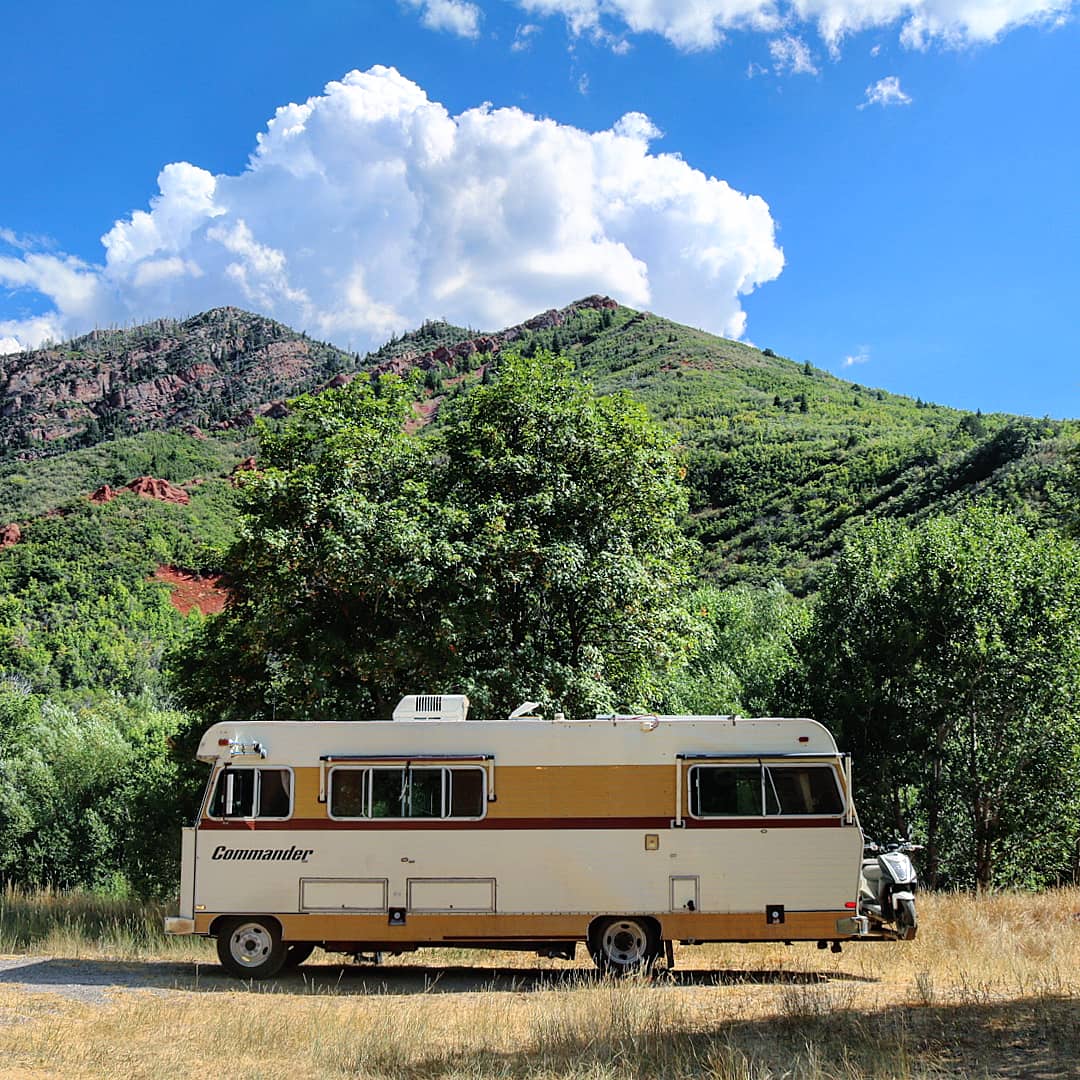 After doing a ton of mechanical work in Richfield, I finally felt like Mander would make the last 150 miles to Salt Lake City.

The plan, before I got held up in Richfield, was to go to my friend Gavin’s house in Salt Lake City. Gavin was going to help me do a couple things on Mander and give me a space to park while I did some paid gigs in the city.  The main thing Gavin and I planned to tackle, was dropping Mander’s gas tank to clean it. If you’ve read my previous posts, you are privy to the fact that I had been continuously plugging up fuel filters. I had long since given up hope that the tank would clear itself out, and conceded to the fact that I was going to have to take more drastic measures if I ever wanted to stop breaking down on account of a plugged fuel filter.

It’s crazy how much stress a little $6 part can cause. I broke down at the top of mountain, in the main path of traffic at a gas station, in the middle of a mountain road, two minutes from arriving to my camping spot…the list goes on and on. Needless to say, I carried a back stock of fuel filters to have on hand at all times.

I was more than ready to deal with this issue once and for all! But first, I needed a little time in the woods. I had spent almost 2 weeks living in parking lots, in the middle of a city and I was craving some peace and quiet. There was a boondocking spot on the way to SLC, so I pulled off for a few days of solitude. The cats also enjoyed being out of the city because that meant, outside time! They both experienced the loveliness of a tree for the first time.

Oh, did I mention I had to change the fuel filter to finish parking here? I was trying to get level when Mander sputtered out and wouldn’t start again until I replaced the filter. I was really looking forward to fixing this super annoying problem, so after a few days of relaxation, it was time to finish the drive to SLC.

I had roughly 100 miles to go and they went by without a hitch. I pulled off the highway and was less than a couple miles away from Gavin’s house, when Mander started acting up. I pushed on because I was so damn close I couldn’t possibly breakdown now! Just a few more blocks…C’mon! C’mon! C’mon! I started to make the turn into the neighborhood and just as I got Mander’s nose into oncoming traffic…she died. Try as I might, she would not start again.

It was classic plugged fuel filter symptoms, but I couldn’t believe I had only gotten 100 miles out of that fuel filter! Frustrated and a bit panicked that I was in the way of traffic, I pulled off the dog house and got to work changing the filter on a steaming hot engine. I got the new filter on and as cars were honking and swerving around me, I tried to start her again. Still nothing. Now I was really starting to freak. I called Gavin and told him where I was and what was going on. He laughed at how absurdly close I was, said he would hop in his Grandpa’s GMC and come tow me the rest of the way. 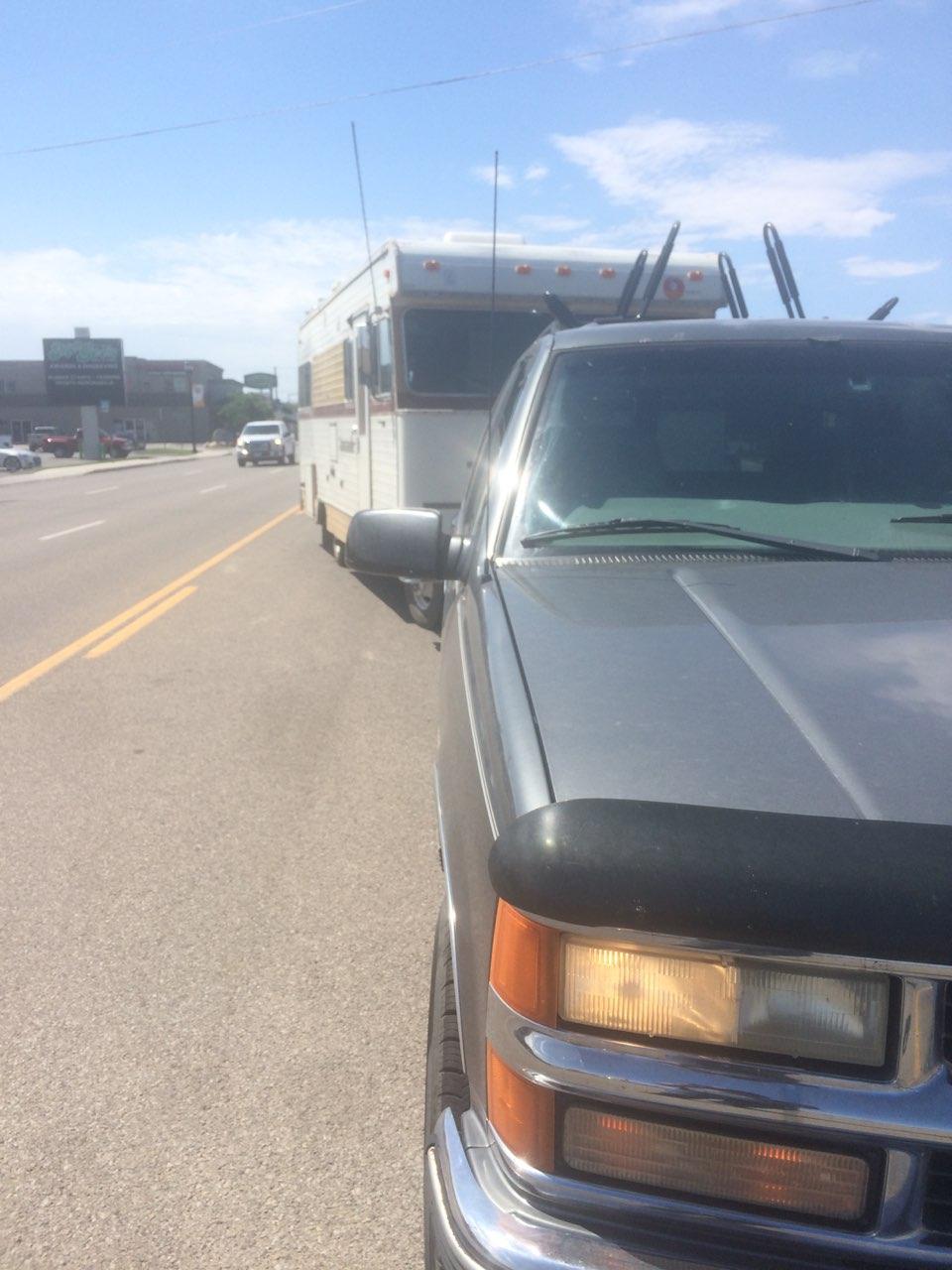 You see, Mander has two fuel filters and it’s usually the top one that gets clogged, being it’s the first one in line after the gas tank. There was a chance, that this time, it was the fuel filter underneath (second in line) but I’ll be damned if I was gonna lay in the middle of the street with cars rushing towards me and change it! So a tow it was!

I was not prepared for how terrifying this tow was going to be. Mander is a tank and when she isn’t running, I don’t have any power steering or power assisted braking. I suppose the tow strap was average length but from where I sat, in the driver’s seat of a lose cannon, it looked about 5 inches long. Gavin started pulling me and I was positive I was going to go careening into the rear of his Grandpa’s GMC or drive right through someone’s house.

Gavin and I had each other on speaker phone so we could communicate while he towed me. And when I say communicate, I mean I was freaking out and telling him, “We have to stop! I can’t do this! I can’t do this! I’m gonna hit you!” and he was telling me to calm down. Luckily, he had had the experience of being towed in a motorhome before, so he knew how scary it was and was able to say the right things to keep me going (but, like I really had a choice. He was pulling me after all).

We rounded the last corner and pulled up safely next to his house. After Mander’s engine cooled down and my heart rate was back to normal, I change the fuel filter underneath Mander. Sure enough, that was the problem. Quite the fuel filter finale. I’ll give you that Mander.