Posted on June 18, 2019 by agirlandhercommander 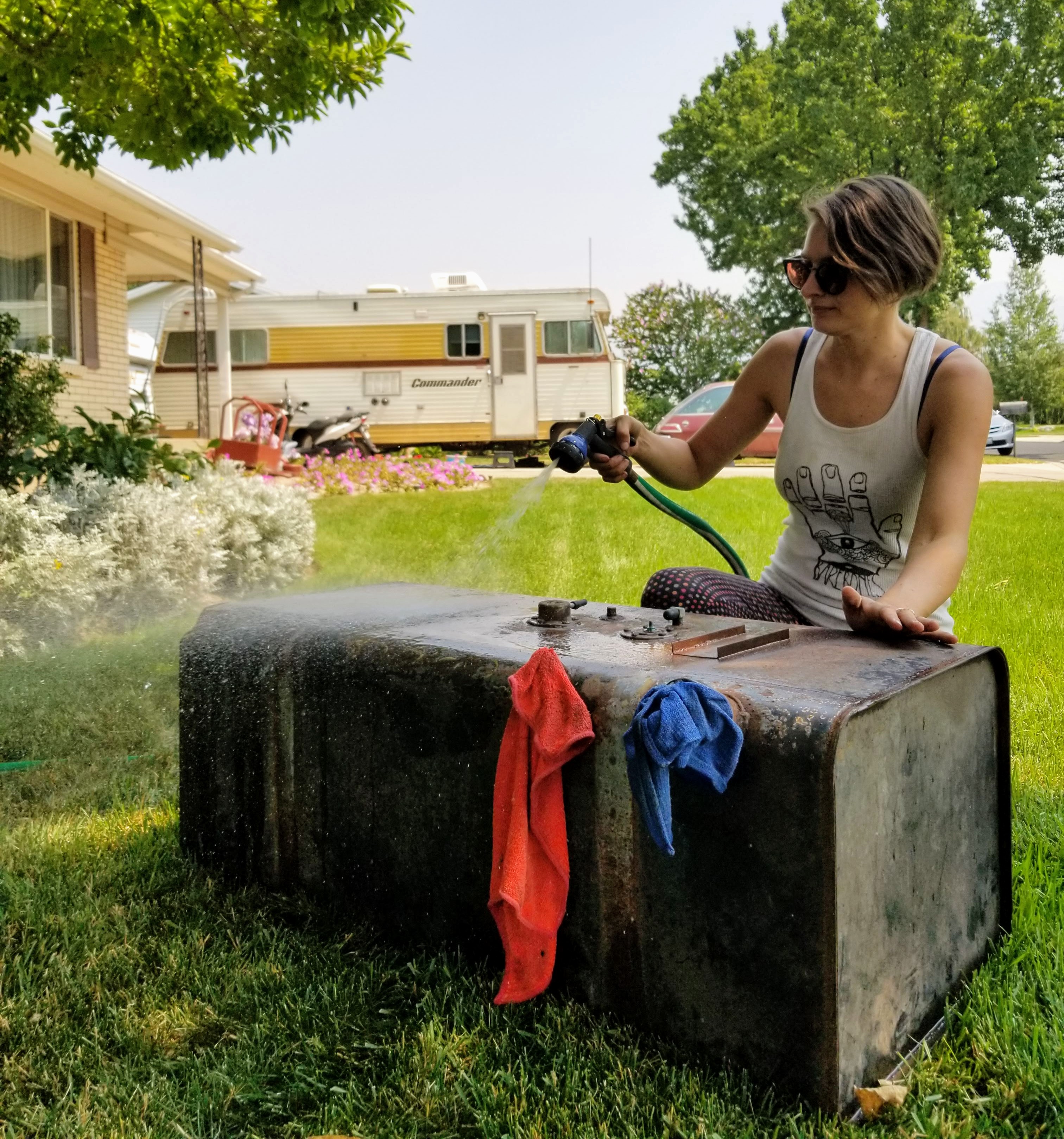 Now that Mander was all nestled into Gavin’s driveway, it was time to get to work. And by work, I mean immediately run to Home Depot and buy an air conditioner for Mander or I wasn’t going to make it out of SLC alive.

With the new AC hooked up, cooling the inside of Mander down to a more survivable (just barely) 90 degrees, Gavin and I started working on Mander. We immediately ran into issues, so we did what any reasonable person would do, we drank tequila. (honestly, I very rarely drink. Gavin is a bad influence. ;)) 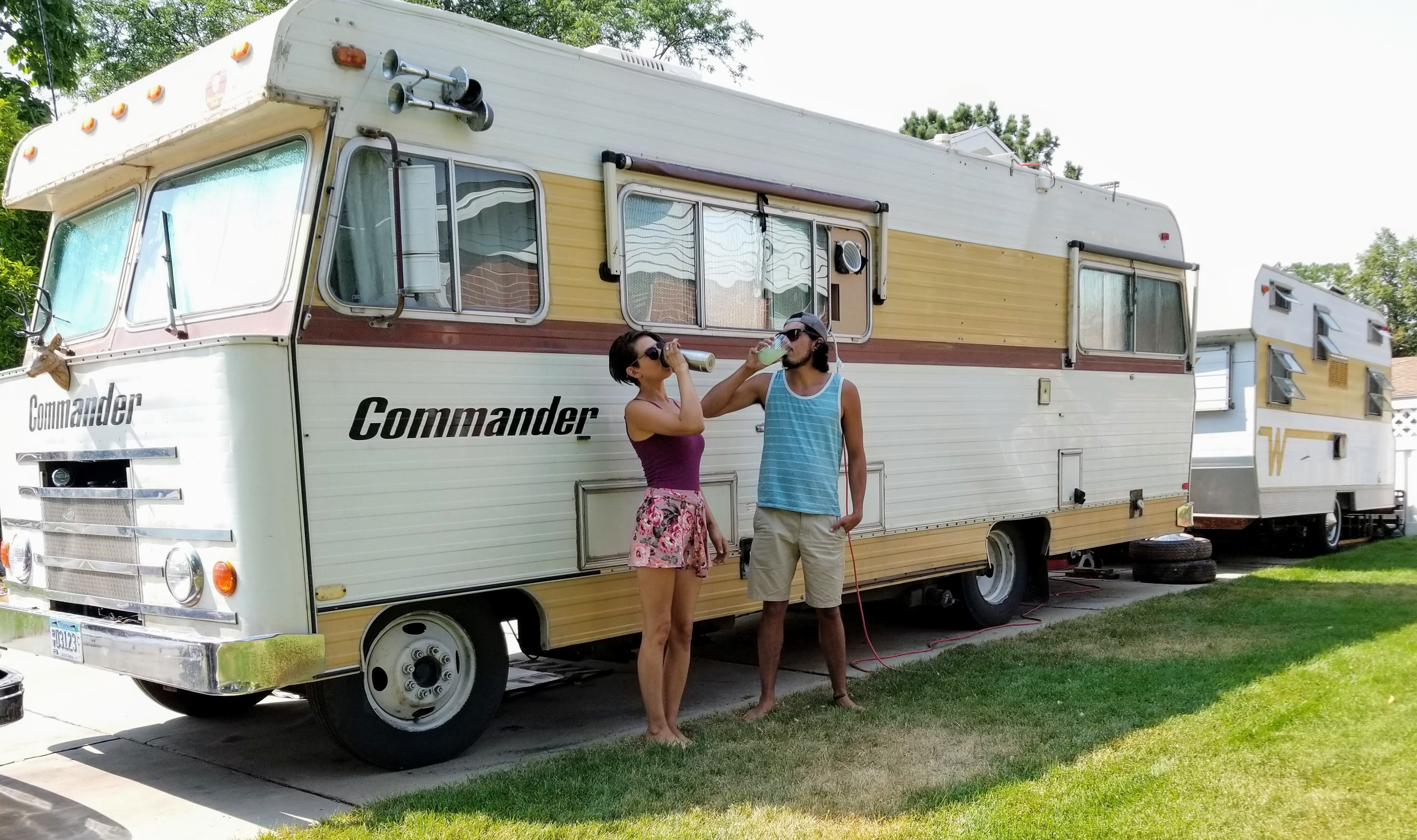 With that out of the way, the next day we were able to try again. We figured out what was stumping us the day before (distributor cap wires put back in the wrong order) and moved on to the big task at hand; removing Mander’s gas tank. 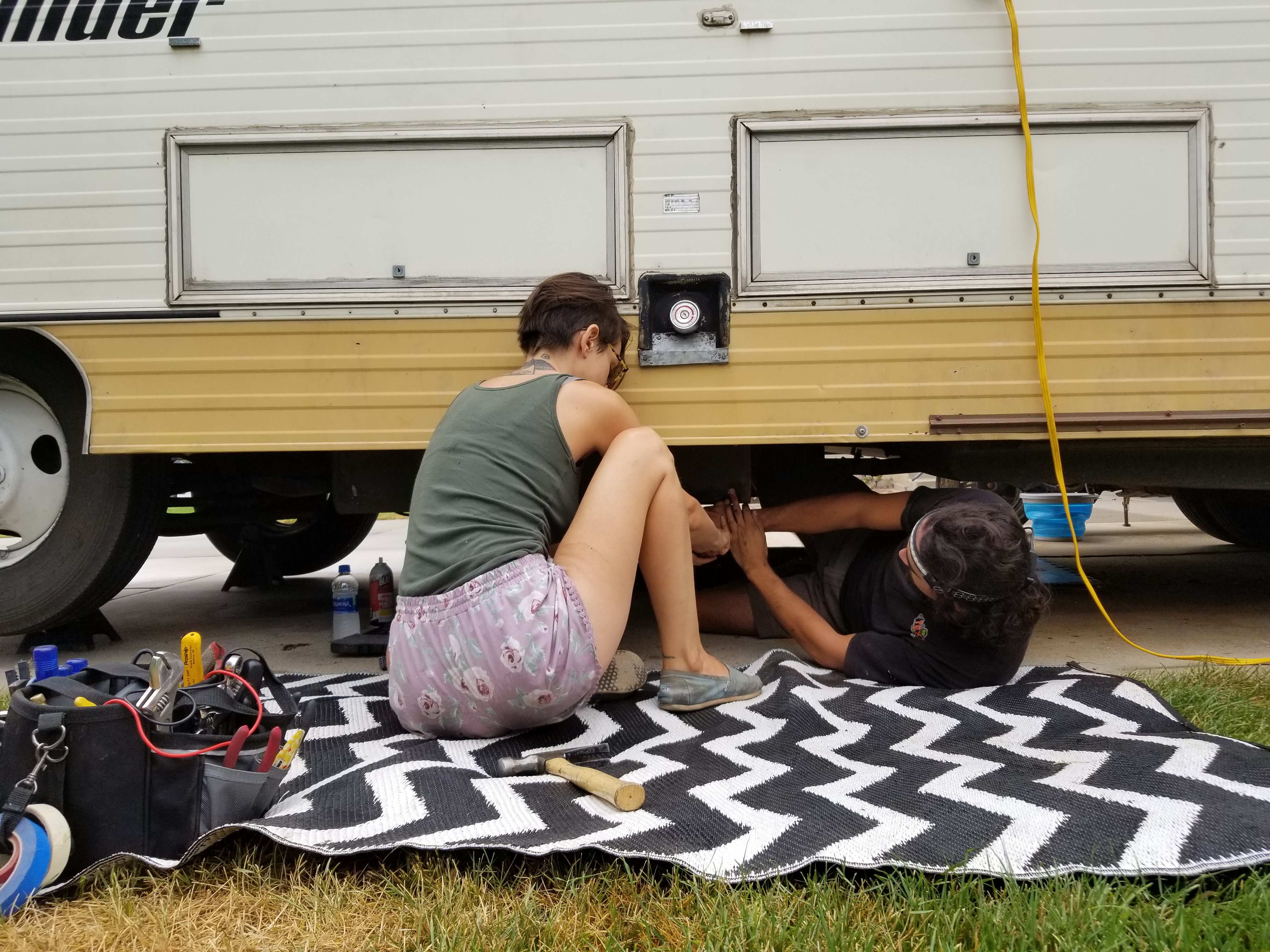 We joined forces and wrestled with the nuts and bolts until we realized they weren’t going to come off without the help of a power tool. No amount of penetrating lube and patience was going to do it this time.  So we went back to Home Depot and rented the only tool they had that would help us, an impact driver.

All I can say is THANK YOU BABY JESUS FOR THE INVENTION OF POWER TOOLS! It was laughable at what an easy job the impact driver made of what seemed impossible to us. We had those nuts off and the tool returned in a fraction of the time that we had rented it for! We finished removing the hanging straps, and with each of us under Mander, on either side of the tank, we balanced it on the jack and slowly lowered it down to the ground. That sounds so much easier than it was because after getting it to the ground, I realized I had way more gas left inside than I had thought. That tank was heav-vay (and sloshing). 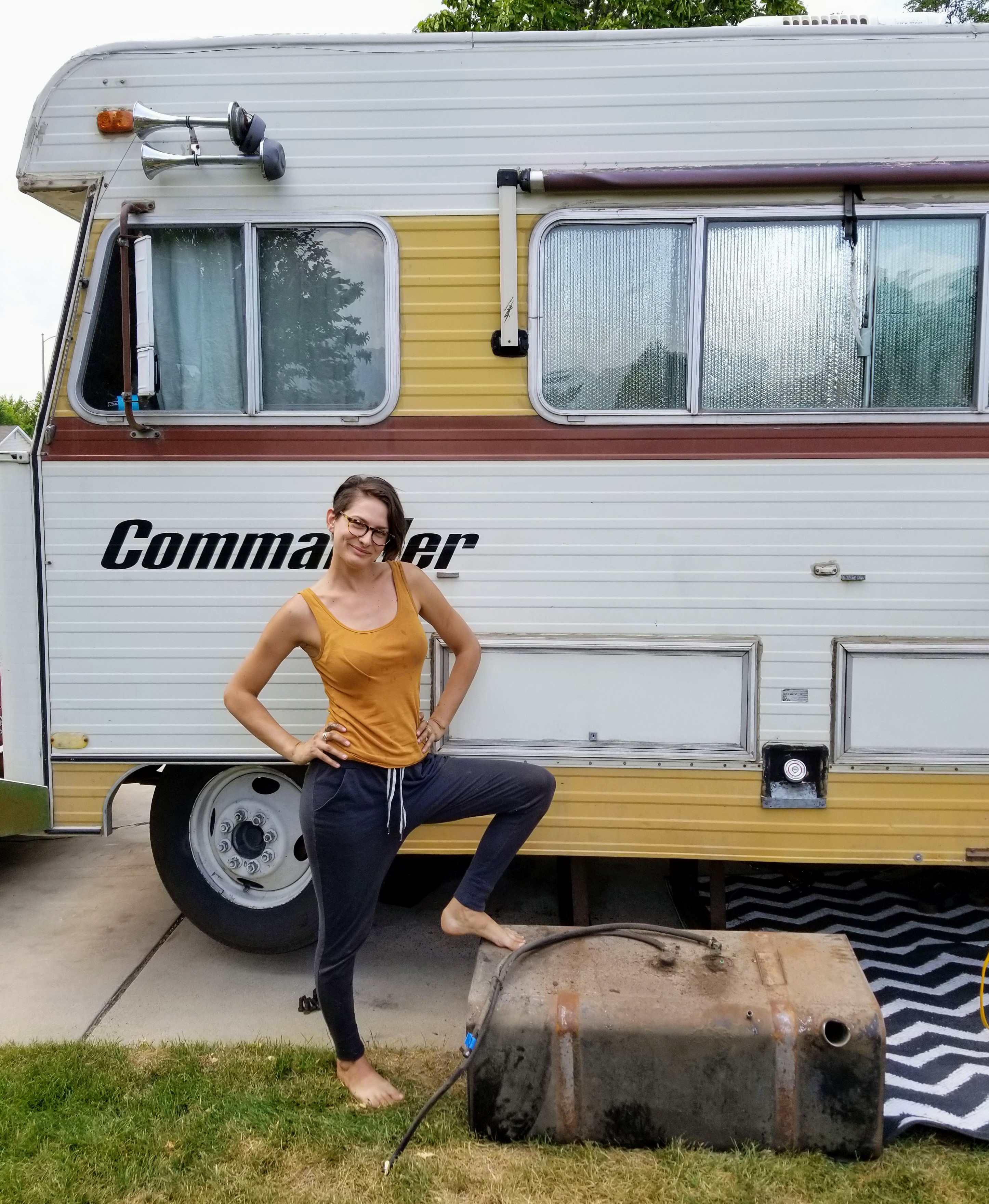 But we did it! It was out! Now to get the remaining gas out and have a look inside. I couldn’t wait to finally get my eyes on what had been causing me all these issues. I was hoping to see debris floating around inside a rusty tank. I got my flashlight, peeked inside and saw…a damn clean looking tank.

Honestly, I wasn’t super surprised because pretty much every time I changed a fuel filter it looked clean. I even cut one in half, and couldn’t see much of anything inside. At this point, I just assumed there was some sort of sediment, invisible to the naked eye, floating around in there.

Since the tank wasn’t rusty and I couldn’t find a replacement tank, I decided to just clean and reinstall it. I busted out the garden hose and quickly realized that there were baffles inside the tank, trapping the water and making it impossible to clean. Gavin and I struggled to get the water out, tipping a very huge and heavy tank this way and that, but to no avail. On top of that struggle, I was not feeling great inhaling gas fumes, so I stuffed some rags in the open holes and called the local radiator shop to get a quote. They said it would be around $150 to clean, which involved drilling in some drainage holes, installing a petcock valve and welding things back together.  I decided it would be worth the money and at the same time, I could have a professional look at it and see if they would recommend coating the tank (big debate and opinions out there on whether this is a good idea!) or not.

We dropped it off and by the end of the day, they had it cleaned! They said they got some stuff out of it but overall, it looked really good and they didn’t think I should have to do anymore to it. So we loaded up my squeaky clean tank and got to work reinstalling it. As most things, it was easier to put back than it was to take out and before you know it, we had that thing back up and hanging by it’s straps.

We had pumped out about 10 gallons of gas and I didn’t want to waste it, so we came up with a contraption to put the gas back in without reintroducing any debris. We attached a filter to the end of a hose on a hand pumped and pumped it all back in. I was pleased to see that we did catch some visible debris so I knew cleaning the tank had probably done something.

The tank was reinstalled, fuel was added back in, rubber fuel lines were replaced, and since I had replaced the carburetor in Richfield, the only thing left that hadn’t been addressed involving the fuel, was the pump. Working around 100 degree days, Gavin’s work schedule, my work gigs, fighting rusty parts and dealing with the learning curve, it had taken us roughly a week to complete this job. The last thing I wanted to do was replace a perfectly fine working fuel pump. But I knew, that if I wanted to have the best chance of putting a stop to this plugged fuel filter situation, I just better buck up and do the damn thang.