Posted on July 10, 2019 by agirlandhercommander

I went back and forth about whether or not I should replace the fuel pump roughly 102 times before I convinced myself to just do it. The old, “It’s just 2 bolts!” got tossed around by people trying to convince me it would be easy peasy but after replacing my starter, I knew better. “Just 2 bolts” doesn’t guarantee it’s going to be a simple job.

I got the part, crawled under Mander and hoped for the best. Mander has an oil leak, so it seems like no matter what I do, working on her leaves me coated in oil. Despite that, after a little struggling and a handful of curse words, I climbed out from under her with the old fuel pump in hand. I had some difficulty getting the bit of hard line off but eventually it came lose and I was ready to install the new pump. 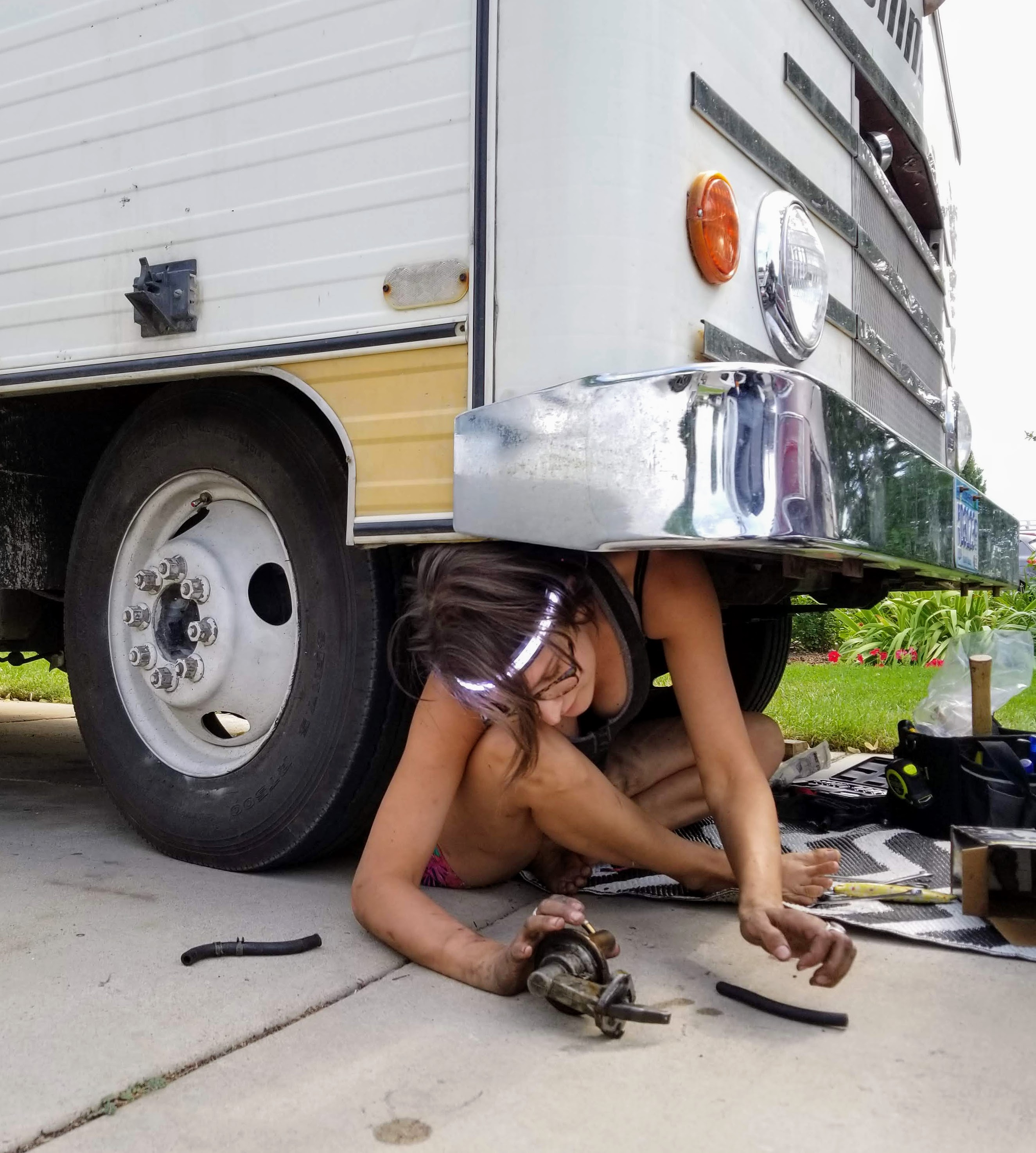 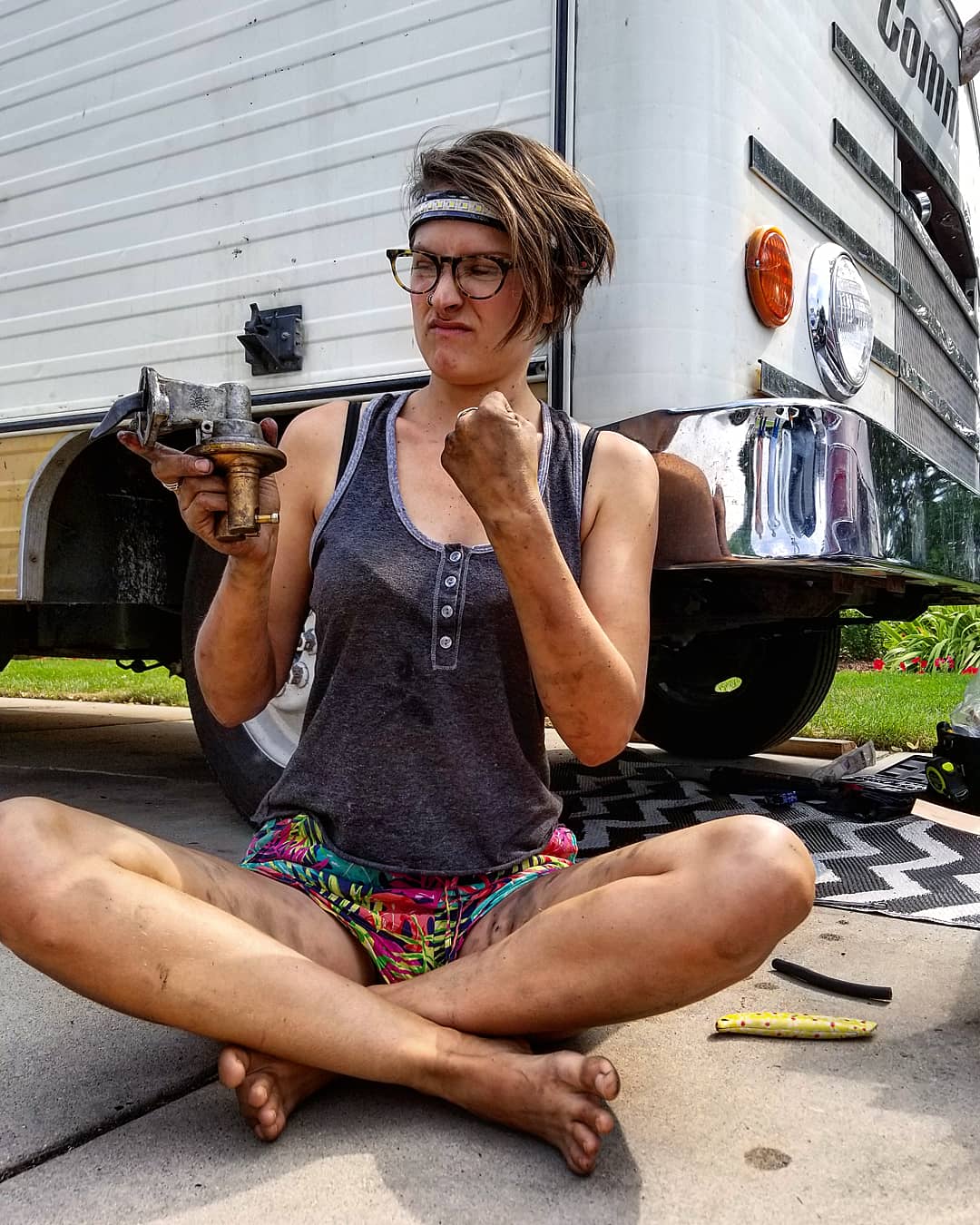 Back under I went, and this is when the “It’s just 2 bolts” advice proved to be the B.S. I knew it was. There is a rod inside the engine block that dropped down when I pulled out the pump. Now, I had to finagle the new pump in and somehow blindly push that rod back up into place. If you haven’t noticed by now, I’m the kinda girl that likes to jump into things and figure it out as I go, for better or worse. I’m sure if I would have done some research beforehand, or even during, I would have found an easier way to handle this rod situation. But I was in too deep, my stubbornness has kicked in full force, and it was me against the rod. Battle of the wills and I wasn’t going to cheat by using the internet. No siree Bob. I was going to win this fair and square. I was going to be smarter than the rod.

Eventually, I shoved and wiggled the fuel pump just right, that it caught the rod and lifted it back up into place. VICTORY! I tightened the two bolts, hooked the fuel lines back up and started Mander to see if I had any leaks. I inspected every part of the fuel system, since I had basically overhauled it all, and not a single drop of fuel was escaping. Hooray! Now for the ultimate test, taking Mander for a drive.

It was over 90 degrees but both Gavin and I were itching to see if all the work we did dropping the tank was going to pay off. So we got our sweaty asses in Mander’s seats and took her for a spin. We held our breaths and I brought Mander up to speed and just as we were thinking it was safe to celebrate, she sputtered. I took a turn onto a back road in case we fully broke down and headed back to Gavin’s. She was driving alright for the most part but after knowing all too well what Mander acts like when she isn’t getting ALL of her fuel, I knew something wasn’t right. I was trying not to panic. I thought, “It is probably just some residual gunk from the tank cleaning making its way out. No biggie. You’ll just have to change a few filters and then you’ll be home free.”

We made it back to Gavin’s but when I got out of Mander, I heard her coolant boiling. Then I saw coolant on the ground. Then I died. This was not good. Overheating is one of the more damaging things you can do to an engine, so it was crystal clear that I couldn’t leave Gavin’s driveway until I handled this situation. And Gavin made it clear that he was done helping me. He had tried to replace the radiator in his Winnebago and it did not go well. He thought it was going to be a repeat situation in my rig and he wanted no part in it. I felt I had no choice but to tackle this daunting project on my own because I certainly couldn’t Mander on in the heat of the summer spewing coolant.