Posted on September 5, 2019 by agirlandhercommander 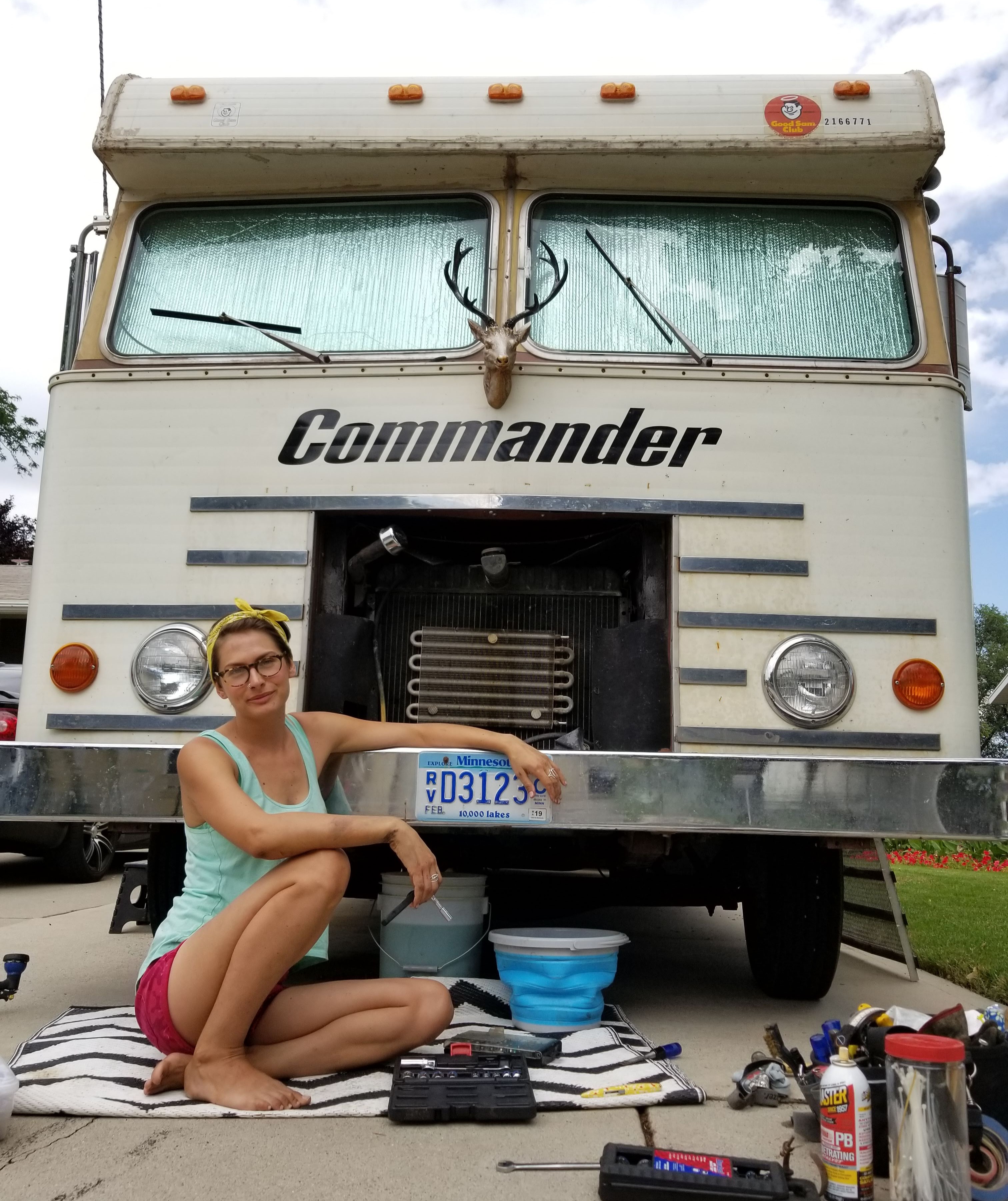 Before I jumped to the worst case scenario, I needed to determine where the coolant leak was coming from. So I hopped on my scoot and rented a radiator pressure tester kit from the auto parts store.

Since coolant gets wicked hot, you want to determine where the leak is with the engine off. But when the engine is off, the system isn’t under pressure so nothing leaks. Enter the pressure tool. You hook this tool up to your radiator, pump the pressure up to the PSI for your radiator and then run around like a maniac trying to find the source of the leak before all the pressure falls out. Repeat until you’ve found the culprit. My culprit happened to be a pin hole on the top of the radiator. One pin hole that I could see anyway. 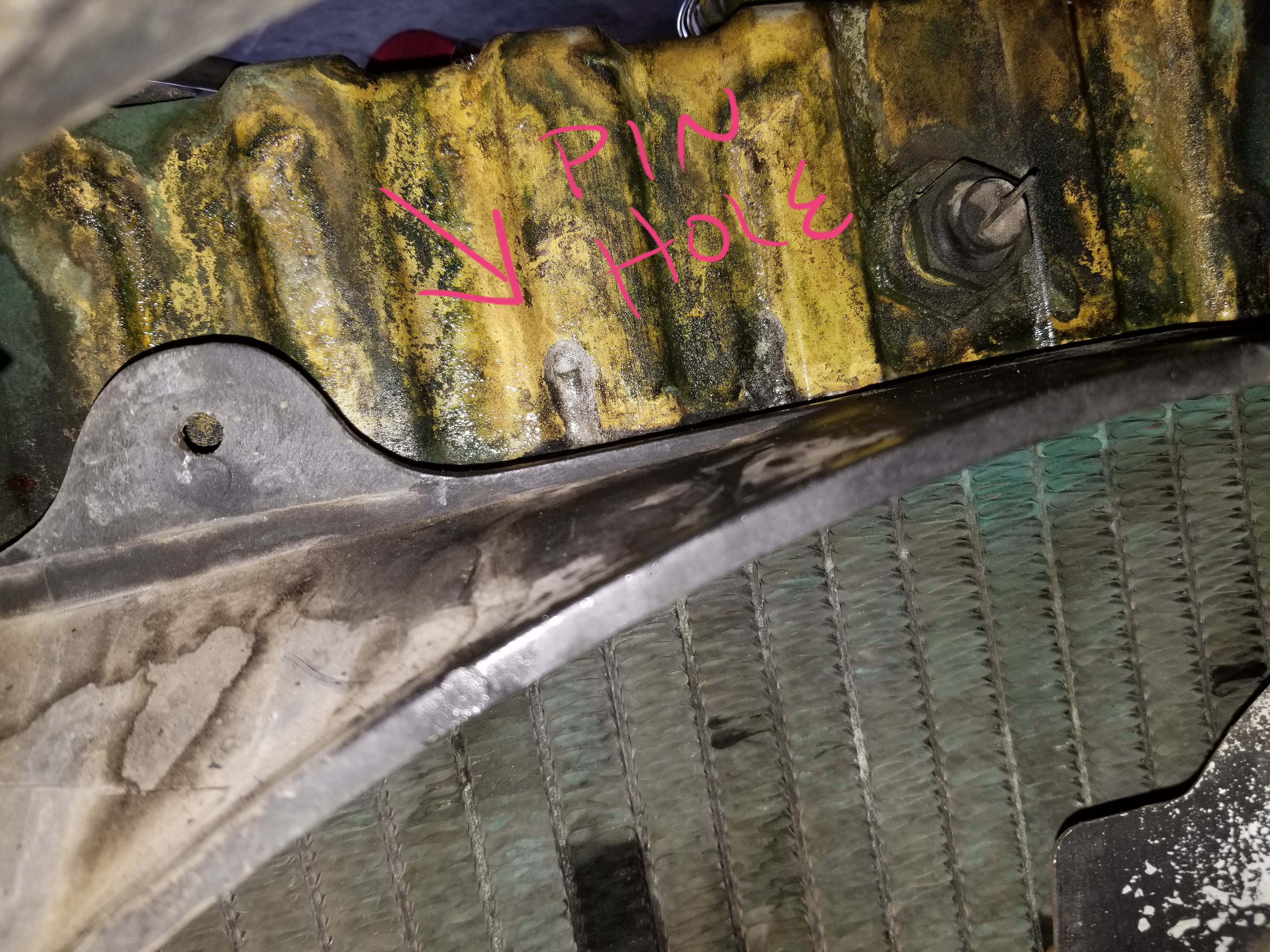 I talked with a couple trusted friends about different ways I could remedy the situation without having to pull/replace my radiator (and a lot of armchair mechanics offered up their unsolicited advice on Instagram. Most hilarious award goes to “Crack an egg into your radiator, it will boil and plug the pin holes from the inside. SMH) but everyone agreed that any semi-suitable band-aid idea would inevitably leave me up shit creek without a paddle sooner than later. I eventually came to terms with the fact that the radiator was going to have to come out and began my search for a replacement one.

Turns out they don’t make them anymore. I looked at radiators that appeared to be similar shape and size, but I would have had to modify the mounting brackets, which would require welding tools. So I found a place that would be willing to repair the one I had, if I yanked it out. That settled it. It wasn’t going to be easy but it would definitely be the most affordable to pull and repair the existing radiator. If all went as planned, I would have a cleaned and patched radiator, new hoses and a new thermostat installed in a few days. This was my biggest mechanical endeavor yet. I wasn’t totally confident I could even pull it off, but I pushed up my sleeves and got to work anyway.

Here’s the the thing about working on old vehicles, they are easier in a lot of ways and parts are cheaper, but you better believe that you’re gonna run into your fair share of bolts that don’t want to turn. The next couple days were a blur of me spraying things with PB Blaster, cussing, busting my knuckles, crying and being covered in greasy fluids. At one point, I accidentally dunked the back of my head into a bucket of coolant and transmission fluid and believe you me, that stuff does not wash out of your hair easily. I had a good laugh and decided to just rock the greaser look. All things considered, I made good progress until I ran into the 2 most stubborn bolts in all of Manderland.  Dun, dun duuuuuun.

These 2 bolts on my thermostat housing appeared as if they had been bolted down in 1978 and after 40 years of expanding from heat, had pretty much welded themselves in place. I was hoping that this was a situation where I wasn’t strong enough to get them to turn and I just needed to find some bigger guns. So I called the one other person I knew around the SLC area to ask for help and he agreed to drive out to see if his arms would do the trick. In the meantime, I kept working hard at pulling the radiator.

On day 3, I finally muscled that thing out. I felt incredibly proud of myself but at the same time I was physically and emotionally beat up and just plain worn out. I knew I had only fought half the battle and there was still a lot more to come, but I tried not to let that stop me from celebrating this victory! I freaking pulled my radiator out! By my damn self!

The next day, the friend I called for help got out of his car wielding stronger arms and tools, including a breaker bar. He got the first stuck bolt out using his extra muscles but the second one still wouldn’t budge. This is the part of the story where I learn a hard lesson. That lesson is; you should never put a breaker bar on a stuck bolt if it’s anywhere near your engine unless you’re prepared to have to drill it out. At the time I thought, “Brilliant! Leverage! Just what we need!” He put that breaker bar on the bolt as I cheered him on and proceeded to snap the bolt head right off. Apologizes were made as I choked back the tears and told myself lies about how I could probably fix it without having to drill it out. I held it together until after he left and then promptly called my go-to engine advice friends and fell apart. 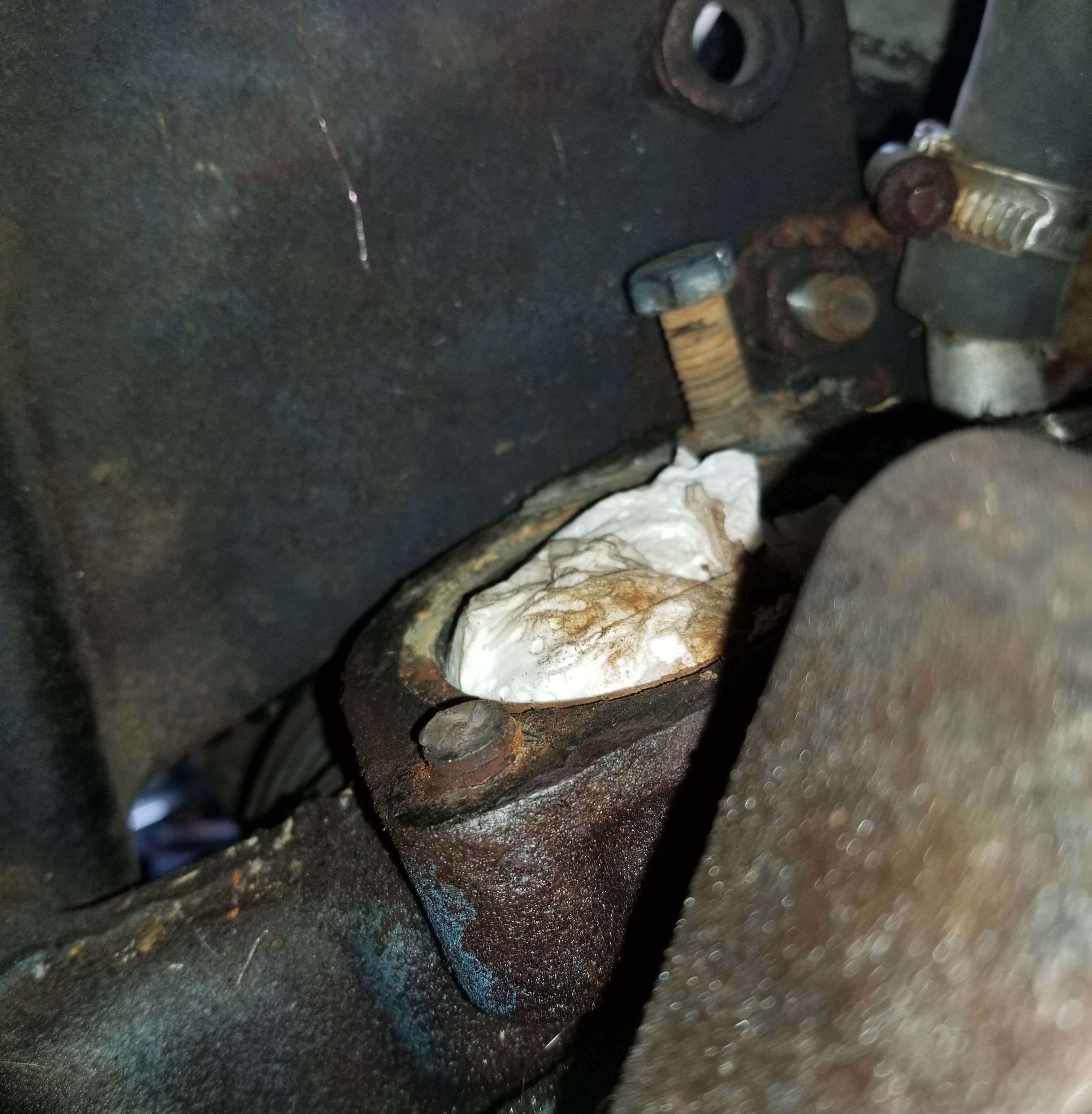 This was not good. Most likely the bolt was going to need to be drilled out and if you read my post about the exhaust manifold, you know this scenario is far from ideal and dreaded by most mechanics. It takes a lot of practice and a steady hand to drill a bolt out successfully and if you mess up, it can make things a lot worse off.  This unfortunate situation was compounded by the fact that it had been made known to me that I had overstayed my welcome where I was parked.  I absolutely hate feeling like a burden on anyone and the last thing I wanted was for this repair to escalate into something even bigger. I dried my eyes and held onto the only glimmer of hope I had. Since there was a small amount of the bolt exposed, there was the teeniest, tiniest possibility that I could use a torch to heat it and the heat might break the bond enough for me to turn it with a vise-grip. I had to try even though it looked bleak, so I got on my scooter to go purchase a torch and the best damn pair of vise-grips I could find.

I’m on Patreon!  Sign up for any amount, even just $1 a month, and gain access to all Patreon exclusive content, including weekly vlogs. Check it out by clicking here!

11 Comments on “Here Goes Nothing”