After I left Gavin’s, I needed a place to park for a little while longer because my boyfriend, Jeffrey, decided to fly in for a visit! Someone on Instagram that follows me, has a friend from high school, who’s husband’s cousin had a back lot I could park in outside of SLC. You with me? Yeah, I had a hard time following that trail of connections too but I was happy to let it lead me to a little city named Tooele, where I could safely park and wait.

The back lot was behind a house that was under construction so nobody was living there for the time being. The owners of the house was a guy named Bruce and his son, Cameron, who both quickly made me feel welcomed. I finished working on a few things, explored the city on my scooter and waited the arrival of my boyfriend.

When Jeffrey arrived, we hightailed it to the nearest forest to seek out the much needed peace and quiet. I had been parked in the suburbs for well over a month and I was craving the recharge only nature could give me. After a couple of nights under the trees, we were ready for an adventure. Visiting the Bonneville Salt Flats had been on my bucket list for years and we were just a couple hours away, so off we went!

That was a much needed reprieve from the city, the sun and cell phone service. 😁😁😁

The drive to the salt flats went off without a hitch, thank goodness. After doing all that work on Mander, I was nervous to see if all the new parts I installed were going to stick. We found a place on BLM outside of the salt flats to camp and drove the scooter to the flats to explore. This place….lemme tell ya…oooooeeeee! It’s a sight to see! 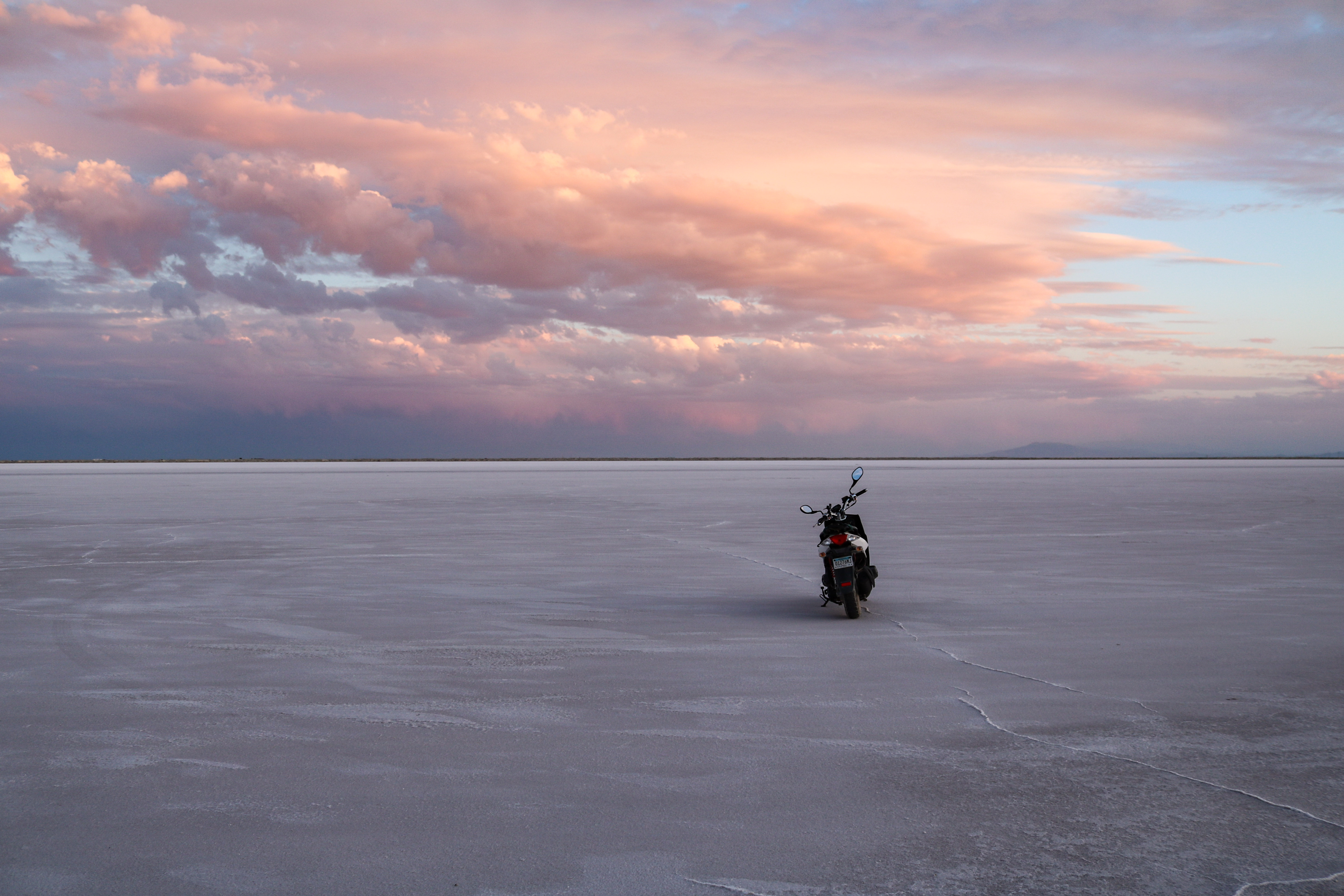 I was in love with it’s other worldliness. Talk about wide open spaces! I didn’t do any research in advance and it turns out, we got pretty lucky to see it in the condition it was in. The salt was hard and dry, while other times it can be completely flooded or a sloppy, salty mess. The conditions were perfect for driving onto it and playing! Jeffrey and I danced, explored and used the white nothingness as a backdrop for taking creative photos.  I feel like I could have spent weeks there and not gotten sick of it.

You may have heard of the Bonneville Salt Flats as the place people go to set land speed records. They have organized events but a lot of people go there to tear it up on their own time. I decided I better not leave Mander out of having that experience. Except she’s old…and she’s my house…so we took it a bit easy.

Don't forget! I'm coming in hot with the livestream tonight at 6pm MT! See ya then! 💖💖💖

We spent a few days there goofing around and on the last day, as the sun went down, we watched the full moon rise over the flats. It was just so dang perfect and magical. Really, the only negative thing I can say about our visit to the salt flats is this; THERE ARE SO MANY FLIES. It was such a surprising, weird, phenomenon that no one seems to mention. It’s not like there are flies swarming all around you outside but they are unnoticeably there, in desperate search for something stationary to land on that isn’t salt. So when you provide that for them, they show up in droves. We ended up with hundreds of them inside Mander and boy oh boy, did I wish I had come stuffed to the gills with fly paper.

The next morning, we made an emergency stop for fly paper and then headed back to SLC. We were driving on the highway going 55 mph and everything was hunky dory, when all of the sudden, a very loud whirling sound erupted from underneath the doghouse. It sounded like I had slipped out of 3rd gear, into a lower gear and the RPM’s were through the roof. I panicked and got off at the nearest exit to try to figure it out.

When I came to a stop and looked everything over, I couldn’t find anything wrong. I checked my transmission fluid, it was full and didn’t smell burnt. At a loss, I tried to tell myself that maybe I had imagined it or maybe the wind was just hitting my rig weird. I pulled back on the highway and it was clear, as soon as I started to gain any sort of speed, the whirling sound got louder and louder. At 35 mph it sounded like Mander was going to pop and since I didn’t have an RPM gauge, I couldn’t tell if I was pushing it or not. The only thing I could think to do was to text Bruce and Cameron and ask if I could head back to the vacant lot so I had a safe space to try to figure this out. Luckily they said yes because I was falling apart at the wheel. I had just waded through a month of repairs and I was exhausted. I reached across the doghouse and held Jeffrey’s hand and cried. I was going 35 mph on an 80 mph interstate. At this rate, it would take us multiple stressful hours to get back. I had no idea what was in store for me but an empty lot, behind a vacant house, in a city I never thought I would be in, let alone return to, served as my only beacon.