Posted on April 14, 2020 by agirlandhercommander 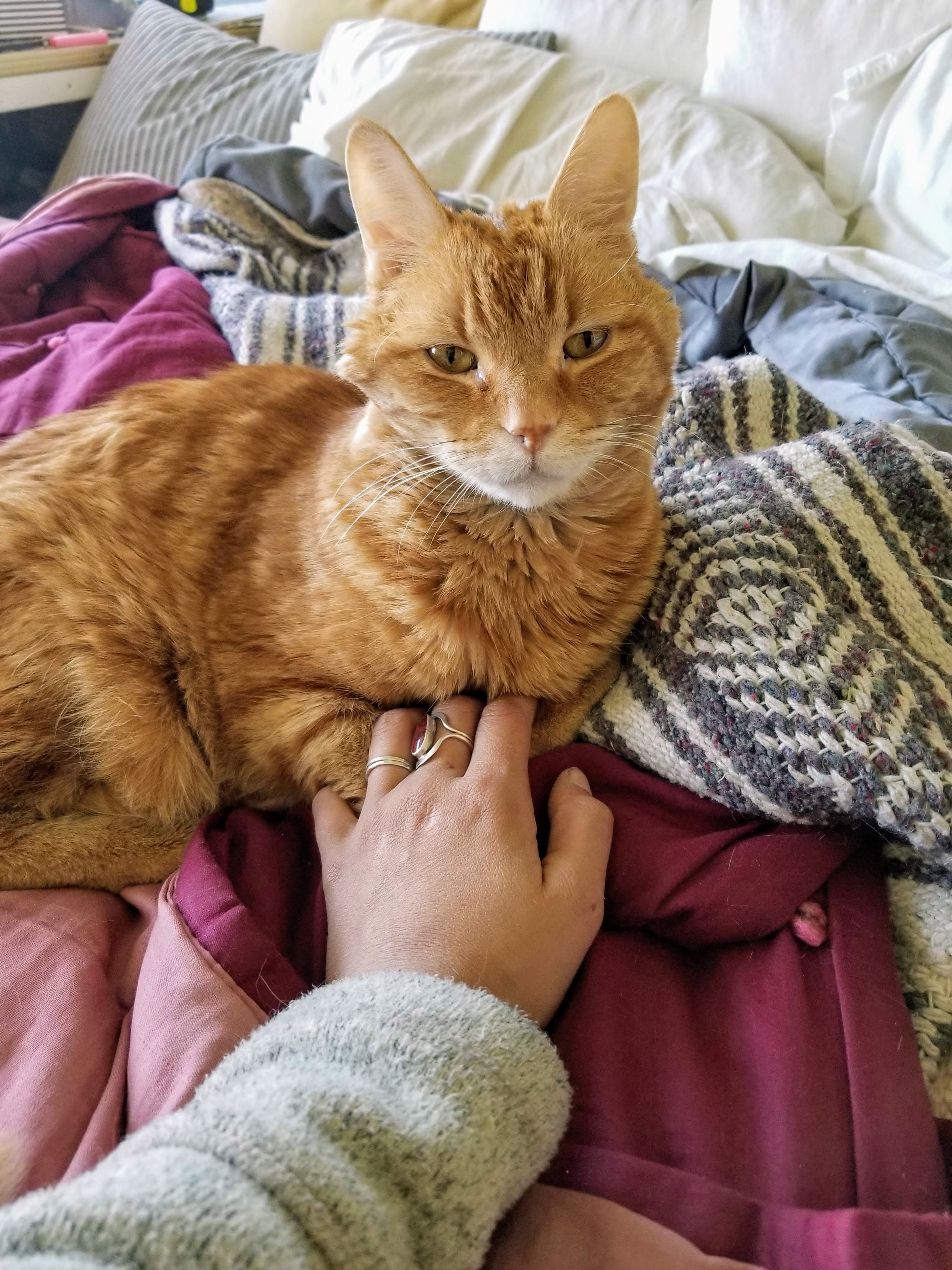 I shared my struggles with my followers on Instagram and two beautiful people stepped up to pitch in for a new Buddy heater. I felt so grateful that all I had to do to be warm again, was take a ride to the local Home Depot to pick it up.

I grabbed my new heater, strapped that sucker to the back of my bike and made one more stop at the local pet food store. I had noticed Atreyu’s appetite had decreased but once again, I couldn’t tell if this was his normal pickiness or related to him feeling sick. I decided to buy all the different food he could eat (which is a pretty limited selection since he is allergic to chicken and a former diabetic which means no grains). I made my way back home with my goods to hopefully remedy all that troubled me.

I enticed Atreyu to eat a little of the new spread, fired up the heater and got to work researching my options for fixing my transmission. I made phone call after phone call with no good leads. Only one local shop would work on my rig and their quote was nearly double what I was willing to pay. I got some more reasonable quotes from further away but then found out my roadside assistance wouldn’t tow me unless it was an emergency. Then there was the living situation predicament. If I had to drop my rig off at a mechanics…where the hell were me and the cats going to go?

I called the few local hotels/motels and was shocked at how much it would cost to put up 1 person and 2 cats for a couple of days. I couldn’t even fathom what the bill would look like if the repair took longer than that. I would be bled dry and well in the hole if I went that route. I had one option that could possibly save me a lot of money…I just had to ask. We all know how hard it is to ask for help, especially when you fancy yourself a strong, independent person. Right from the beginning, Mander has forced me to allow people to help me. It’s been very humbling, I have learned to swallow my pride without choking and the best part is, my faith in humanity has been completely restored. Still, the uncomfortable vulnerability I feel putting myself out there has never dissipated and I have to push myself to do it.

I mustered up the bravery and called the owner of the vacant home I was parked behind. I asked if it would be possible for me and my cats to stay inside. I told him I could pay him a little money and that I would maybe have to stay a week or so. He said my cats would have to stay confined to one of the rooms but that it would be no problem and he would not take any of my money. This house was under construction and the gas was turned off – which meant no heat, hot water or cooking other than the microwave but hell! It was a free roof over my head and I was elated to have it! That took care of one of my stressors. Now I just had to find a place that would fix Mander.

Over the next couple days, Atreyu’s heath remained up and down until one day he got a lot worse. He was trembling, refusing to eat and acting very lethargic. I called the two local vets that I could take public transportation to but there wasn’t any availability until the following week. Of course, I had gone down the rabbit hole of googling symptoms and was starting to think Atreyu’s kidneys were to blame. The veterinarians I talked to agreed that this sounded like kidney failure and told me I should get him in asap. I was full on devastated at this point. I was almost sure my cat was dying and my hands were tied. I cried the kind of cry that you leave your body for. I was already struggling to stay above water and thinking about losing my 14 year old best friend was just too much.

That’s when another beautiful person swooped in. Annie, the girl I had only met for the first time not even a week ago, told me to book an appointment anywhere I could get in and she would bring me there. I didn’t argue for one second. I thanked her and immediately started calling more vets. I found a place that I could get in the next day and felt a little hope return. Annie drove from Salt Lake City, more than 30 mins away, to pick up me and Atreyu and bring us back to Salt Lake City for the vet appointment.

Atreyu got an exam and a blood test with surprising results. His white cell count was high, showing signs of infection, but his kidneys looked surprisingly good for his age! The Doctor was relieved to deliver the good news but not as relieved as I was to hear it. (Sidenote: The Doctor’s name was Jessy! Spelled just like mine with a Y. What a coinkydink!) We didn’t know what the cause of infection was, so she gave him a broad spectrum antibiotic injection and some anti-nausea medication. She also sent me home with some pain meds after we suspected arthritis in his back legs could be contributing to his overall lack of feeling good. After the appointment, Annie dropped us off, only to turn around and head back home to Salt Lake again. What a gem, that Annie. I went to bed feeling so grateful.

The antibiotics seemed to work and Atreyu started showing signs of improvement! I shared the news with Instagram and yet again, some beautiful strangers showed up for me in their own special ways. One woman asked if she could send me a care package. Inside was a Mala she had made herself and several other incredibly thoughtful gifts. Another wonderful soul sent me some money to buy myself a fancy coffee, which I NEVER do. It felt like a real treat!

Sharing your life on the internet can sometimes feel toxic and draining. It sometimes feels like nobody cares or is even listening. And then things like this happen and it breathes life into you. Internet strangers turn into real life heroes, while some do what they can from the other side of a screen. In the end, it becomes the glue that helps put a girl back together again and even through the toughest times, you get to feel so damn lucky.